Converting a 6-Volt Jeep to 12-Volt

In early vehicles, the standard electrical system voltage was 6 volts. As long as you are willing to adequately maintain the 6 volt electrical system and are not wanting to add much extra electrical equipment, it will work fine. Parts are still relatively easy to find provided one knows where to look.

I converted my Jeep to a 12 volt electrical system for two reasons. One was a need to install a high power commercial 2-way radio in the Jeep. The other reason came to light when I needed a jump start and no one could help me.

Note: Gary Dreyer found that the 6 volt system in his 1954 Willys fire truck was turning the engine too slowly. He says, "Because the upgrade to 12 volts was not cost effective (i.e. changing all lights, siren and tube-type radio, not to mention the regular changeover costs). I checked into 'other alternatives.' I ran into an oldtimer who suggested switching to an 8 volt battery. He stated that there was nothing else which needed to be changed. After doing a little more research I bought the 8 volt battery and the battery shop told me the advice was only partially correct, and that the voltage regulator needed to be adjusted. The cost for the total upgrade was the cost of the battery and $25 to get the voltage reg adjusted at the local electrical rebuild shop. Results: engine zips over like a 12 volt system, lights are brighter but not blowing, and the charging system actually shows charging with all acessories on."

This is more of a set of notes about issues to be aware of before and during the conversion rather than an exact step by step procedure to complete the conversion. I've tried to be as exact as possible, but with any old vehicle, modifications make describing all possibilities a challenging task.

This page is fairly specific to the 1953-55 CJ-3Bs with the 4 gauges and a speedometer on the dash, not an instrument cluster. Because of the similarity of the early CJ-3B electrical system with earlier CJ Jeeps, most everything mentioned in this conversion applies to the earlier Jeeps as well. A short section at the end mentions those things in the conversion that are different about the CJ-2A and CJ-3A Jeeps.

Most of these safety tips are obvious, but it seems that the obvious things are the ones that cause accidents.

Some other helpful tips:

As you disconnect wires mark them and draw a diagram showing where the wires were connected.

In the drawings that I have made I show the wires in several different colors. I use these colors to help clarify the text. THESE ARE NOT THE COLORS OF THE WIRES IN YOUR JEEP.

Take the 6 volt parts with you when you purchase the 12 volt parts. The parts that the parts manuals say should be used may not fit becauseof other modifications to your Jeep.

Keep notes on the part numbers of the parts that you have installed in your Jeep. Since your Jeep is no longer "factory stock",the parts manuals are no longer completely accurate. When you need replacement parts, the notes will make purchasing the correct parts much easier.

To operate properly some 12 volt ignition coils require the use of an external resistor. If your coil requires one, it should say "USE EXTERNAL RESISTOR" or something similar on the coil and on the coil's packaging. The ignition coil and resistor are matched to operate together. You should use only the resistor that is recommended by the ignition coil manufacturer.

If your new ignition coil requires an external resistor, mount this resistor to he firewall and connect the wires as shown in figure 2. You will need to add the wire (shown in dark blue) between the ignition coil and the resistor.

The distributor, ignition points, condenser, spark plugs and ignition wires do not have to be changed when converting to 12 volts.

If you are going to install an alternator, remove both the 6 volt generator and 6 volt regulator, use a one wire alternator and follow the instructions for Installing an Alternator.

If you are going to use a 12 volt generator:

The wires connecting to the 6 volt regulator and generator will be as shown in figure 3. The positions of the terminals on the regulator and generator will most likely be different than I have shown in the drawing, so don't try to identify the terminals by their physical positions. If your 6 volt regulator or generator has any extra wires or components connected to its terminals, make sure these wires get reconnected to the proper terminals. The extra component you will encounter most often is an ignition condenser attached to the generator. The body of the condenser will be attached to the ground terminal of the generator and the condenser's wire will be attached to the A terminal of the generator. The condenser may have been installed after the Jeep left the factory to reduce the amount of static heard in an AM (medium wave broadcast) radio.

If the 6 volt regulator and generator terminals are marked, your job will be much easier. If they are not marked, you will need to identify the B terminal on the regulator. The B terminal will be the one that has a wire leading to the ammeter.

Once the B terminal has been identified, the generator and regulator can be removed.

When you purchase the 12 volt generator, bring the 6 volt one with you to verify that the generator is the same size and so the generator pulley can be installed onto the new generator.

When you are connecting the wires between the A, F and ground terminals of the generator and regulator, check the wire sizes. If one of the wires is smaller in diameter than the others, use the smaller wire to connect to the F terminals together. If the wires are all the same diameter this will not be an issue.

The generator will need to be polarized in order to work correctly, however this can not be done until after the battery is installed in the Jeep. If you do not polarize the generator before you start the engine you risk damaging the regulator. All of the generators commonly used in Jeeps use the same polarization procedures. Because you may have ended up with a different type of generator, it is a good idea to ask how to polarize your particular generator before you leave the parts store. If the instructions you receive from the store conflict with those included near the end of this article, follow the parts store's instructions.

Remove the 6 volt starter and replace it with the 12 volt one. The 12 volt starter will have only one terminal, so reconnecting the wires to it will not be a problem.

On the advice of a friend, I retained the 6 volt starter. I have heard that some people have had problems with doing this and had to replace the starter and flywheel ring gear within a year of converting their Jeep to 12 volts. I converted my Jeep to 12 volts over 9 years ago and have not had any problems.

The 6 volt CJ-3Bs have a floor mounted starter switch and no solenoid. If you wish to gamble and retain the 6 volt starter after you have converted to 12 volts, you do not have to change any part of the starter system.

If you do change the starter, the starter switch does not have to be changed.

Remove the two 6 volt headlamps and replace them with 12 volt units. The 12 volt lamps plug into the existing light sockets. The part number of the headlamps that I used was 6014.

Replace the front and rear signal lights with #1034 bulbs. No wiring changes are needed to accommodate the 12 volt bulbs.

If your turn signal switch has an indicator lamp in it, you will need to take the 6 volt lamp to the parts store to get a 12 volt equivalent. You will most likely need a #53 bulb, but there many other possibilities.

The last thing that will need to be replaced is the turn signal flasher. I ended up using a #550 flasher although a #524 flasher should work as well. My Jeep's wiring was nearly non existent, so I was rewiring the Jeep as I was converting to a 12 volt electrical system. Again, the best thing to do is to take the 6 volt flasher to the parts store and get a 12 volt equivalent. Both the 6 volt and 12 volt flasher terminals will be marked with X, L and P. The wires connect to the similarly labeled terminals on the 12 volt flasher.

Replace the headlight hi-beam indicator with a #53 bulb.

Replace the dash light with a #63 bulb.

The VDO sender's length is adjustable, but its apparent shortest length was longer than the length recommended for the Jeep's gas tank. This confused me until I realized that this sender was designed so it could be cut to the proper length and then reassembled.

The ammeter and speedometer, oil pressure and temperature gauges do not need to be replaced.

The horn must be replaced with a 12 volt version. The horn in the CJ-3B has two wire terminals, so your 12 volt horn must also have two terminals. When reconnecting the wires to the new horn, it does not matter which horn wire connects to a particular horn terminal.

Since the heater motor in a CJ-3B is a single speed motor, the easiest approach for converting it to 12 volt operation is to get a voltage dropping resistor. I don't know the part number or manufacturer of the needed part. To get the right part, tell the person at the parts store that you need a dropping resistor to run a 5 amp, 6 volt heater motor on a 12 volt electrical system. This will provide enough information to get the correct part. The dropping resistor gets warm during operation and most of these resistors depend on being mounted to the firewall to prevent them from overheating.

This part is not the easiest thing to find in the newer auto parts stores. You'll probably have better luck finding the dropping resistor in a parts store that has been in business for 20 or 30 years and has experienced counter personnel.

If the test lamp unexpectedly lights to full brightness, you should check for short circuits in the wiring leading to the part of theelectrical system that you are testing.

Alternators do not need polarization. DO NOT ATTEMPT TO POLARIZE AN ALTERNATOR.

To polarize the standard Delco or Autolite generators that are normally used on the Jeep, use a jumper wire to momentarily connect the B to the A terminal (terminals 1 and 2 in figure 3) on the regulator. A second is all that the jumper should be left in place. You will get a spark when you connect the two terminals together -- this is normal.

The engine should start.

If the starter cranks the engine, but the engine won't start, check the connections to the ignition coil and, if it is used, the external resistor.

If the turn signals did not flash before, try them now.

Notes for CJ-2A and CJ-3A Jeeps 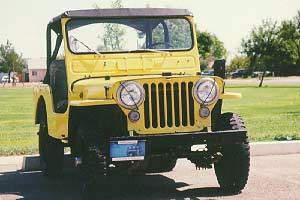 Thanks to Eric for this Tech Tip page. The photo above shows Eric's CJ-3A (with front clip from an M38). -- Derek Redmond

Return to Installing an Alternator, or see other Tech Tips on CJ3B.info.