Los Jeeps:
Made in Spain

Flatfender Jeep production in Spain wasn't quite on the scale of India or Japan, but among European countries, the Spanish have always been the biggest lovers of the CJ-3B. A series of companies in Spain were licensed to build versions of the 3B, as well as other Jeep models, over nearly 40 years. 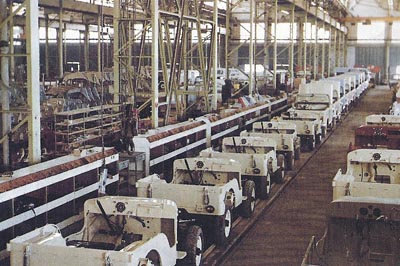 Willys Jeeps were imported into Spain from the U.S. starting in 1953, and by 1960 the Spanish company VIASA ("Vehículos Industriales y Agrícolas, S.A.") was licenced by Kaiser-Willys to build a version of the CJ-3B in its factory at Zaragoza. 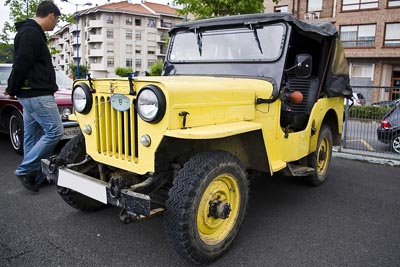 The first few were built with the "Go-Devil" L-head gasoline engine and labelled on their serial number plates as "MB-CJ3B" (see more at MB-CJ3B.com.) 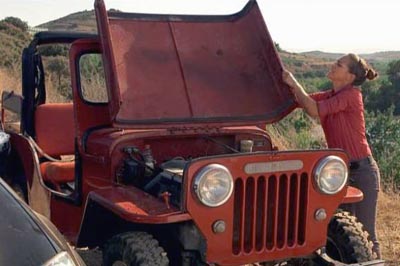 Differences from the Willys CJ-3B included the gas tank on the right side on some diesel versions, conical (not flat) steering wheel, lighting control levers on the steering column rather than the dashboard, and no tool compartment under the seat.

Much of the production was earmarked for the Spanish Army (see Military Jeeps in Spain). 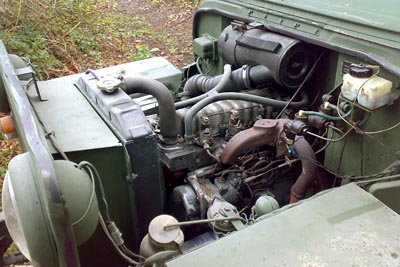 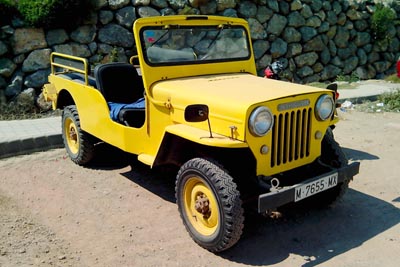 VIASA produced a total of some 25,000 Jeeps, including the CJ-3 and a long-wheelbase version they called a CJ-6. This Willys VIASA CJ-6 was photographed by Martin Irazu (under CC.) 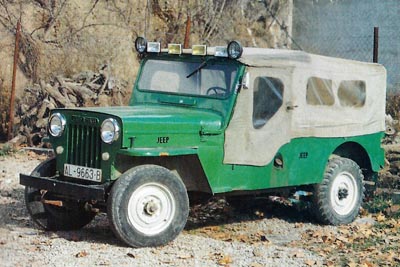 Most licensed Jeep manufacturers around the world met the demand for a LWB model by lengthening the CJ-3B they were already making. The result was given various names, including CJ-6 in Spain, CJ-4 in India, and CJ3B-J11 in Japan.

Willys Motors in the U.S. never bothered with a long 3B, which would simply have competed with its own round-fendered CJ-6. 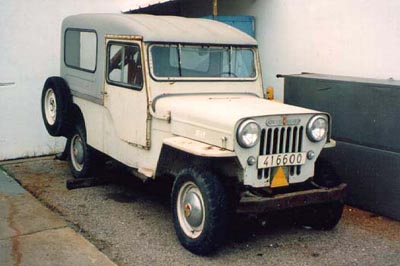 This CJ-6 was photographed by Darron Coates on the Naval Base in Rota, Spain. It was used as a wrecker for the on-base repair shop. Just visible under the long hardtop is a boom extending out through the tailgate. 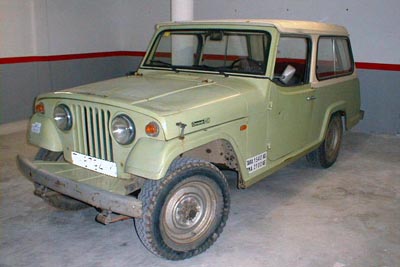 In 1968, VIASA merged with Material Móvil y Construcciones S.A., and two years later the factory moved to Cogullada where the production of their "Comando", very similar to Kaiser Jeep's 1967 Jeepster Commando, began. See Jeepsters in Spain for details on the VIASA Comando. 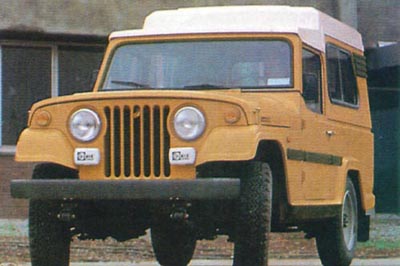 In the 1970's, VIASA was absorbed by EBRO, who continued to produce the Comando. EBRO's final version of the Comando, designated the HDI, was slightly longer than the earlier versions, and the top was also higher. 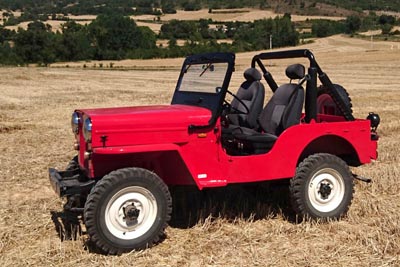 "Bravo" was a later name for the CJ-3B produced under the new ownership of EBRO (the truck division of Motor Iberica) and powered by a Perkins diesel. The Jeep had a complete makeover to face the new sport-utility market, including a roll bar, optional fiberglass hardtop, and bright colours, especially yellow and orange.

Photo by Iñaki Bilbao of his early-70s Bravo, restored in 2016. See more photos of his Jeep in The CJ3B Page Visits Spain. 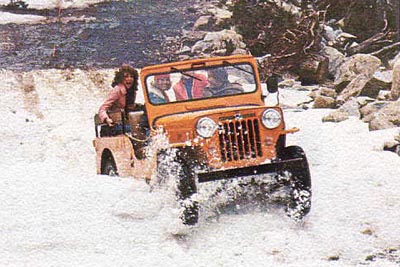 The Bravo was offered under the EBRO and later the "Avia" brand name (see a 1979 Jeep Avia Brochure including the surf photo seen here.)

In the 1970s and 80s, Bravos and Comandos competed in the Jeep Cross, a national all-terrain racing series organized by Motor Ibérica.

EBRO also built some prototypes that never reached the market. The CJ-35 prototype (30K JPEG) was influenced by the American CJ-7, and the CJ-65 was similar to the CJ-8, but neither went into commercial production. 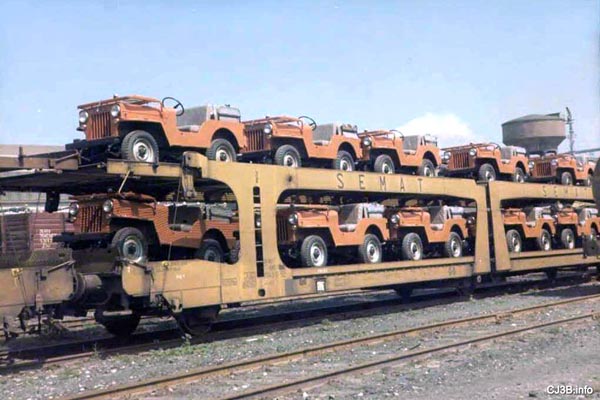 In the early 1980s, the headlights and marker lights on the Avia Bravos were moved slightly further apart, as seen on this carload being delivered by SEMAT. Presumably the change was in response to government regulations.

Orange and yellow were always popular Jeep colors in Spain. 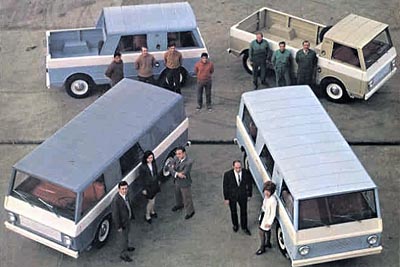 From about 1963-1983 VIASA and EBRO produced the unique Jeep SV-series trucks, with a design inspired by the Willys FC, and built on the Comando chassis. The trucks were powered by the in-line six Super Hurricane, or the 4 cylinder Perkins diesel. Models included the Duplex double cab pick-up (100K JPEG), Furgon one-ton van, Campeador one-ton pick-up, and Toledo 9-seat station wagon (100K JPEG). These light trucks were a commercial success in Spain, but not in France, where the Hotchkiss company tried to sell them.


The End of Production

EBRO Jeeps were also exported to England and France, among other countries (see Jeeps in Colombia). In 1985 however, Motor Iberica was bought by Nissan of Japan. Nissan apparently continued to build the Jeeps into the early 1990's on a custom-order basis, with Perkins diesels, 4 and 5-speed gearboxes, large brakes, and in some cases power brakes and steering. The VIASA/EBRO parts stock and apparently the tooling for the CJ-3B, was rumored for years to still exist in Zaragoza and in a warehouse in Valencia. Surplus, new and remanufactured parts, F-head engines, and Jeeps are widely available in Spain. 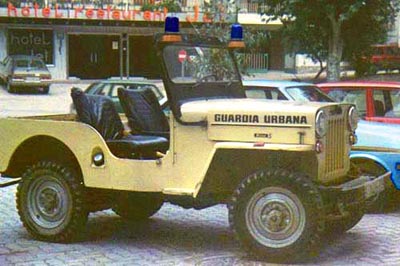 This photo shows a Jeep Bravo belonging to the local police at Caldas d'Estrach, a village in Catalonia, in the 1980's. It has retained its original yellow and black paint, and marker lights on the front fenders. Photo by Roberto Flores.

Some of the material on this page is from an article by Francisco M. Díaz, originally published in Spanish in the off-road magazine Auto Aventura, and translated for CJ3B.info by Ricardo Suárez with permission of the author.

Thanks to Javier Carrion and José Luis G. Prado. Thanks also to Sergio Lwoff and Roberto Flores for additional information. -- Derek Redmond