This brochure, published by Motor Ibérica a few years before the Spanish Jeeps went out of production, is filled with a series of great photos, any one of which would make a good cover photo for CJ3B.info (and one did, in 2005.) 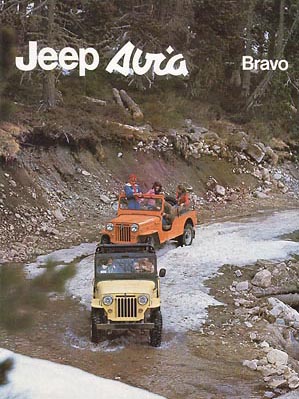 The brand names and model names used for the Spanish Jeeps are confusing, but this brochure clarifies one thing: the name "Avia" was not a model name for the long-wheelbase CJ-3B (see Room for Sunbathing) but actually a brand name that replaced "EBRO" in the late 1970's. EBRO had earllier replaced "Viasa", but in fact all the brands were owned by the same parent company, C.A.F. (which also used the name "Motor Ibérica" for its automotive division.)

The model name "Bravo" for the Perkins diesel-powered CJ-3B had been introduced by EBRO, and the brochure lists the three versions offered: Bravo (Normal), Bravo S (Luxury) and Bravo L (Long).

Page 2 (120K JPEG) has several small photos, and text including the following:

"'Bravo' is the 'all terrain vehicle' with no limitations.

"'Bravo' takes you to impossible places. So it is preferred by lovers of fishing, hunting and adventure. Because their characteristics are the ideals: young, dynamic, sporty...."


The big attraction is the series of photos of the long and short Bravos, driven by a group of young (and dynamic and sporty!) models who apparently arrived by helicopter. Some of the photos were also taken from the helicopter, including an overhead shot used by Avia on a poster (see it in CJ-3Bs in the Sand on CJ3B.info.)

It turns out these photos were taken several years earlier when the model was still badged as "Jeep Ebro", explaining why the front badges appear to be blacked out here. Other shots from the same day appear in Jeep Ebro Ads, 1976.

These beach photos remind me of Surf City: "There's two swinging honeys for every guy, and all you have to do is just wink your eye.... Two girls for every boy." (Surf City by Jan & Dean, 1963)

Thanks to Jean-Francois Lavie and his friend M. Bersano, who found this brochure for sale at a classic car show in Barcelona. Thanks also to Jaime Gomis. -- Derek Redmond

See other photos from this shoot in Jeep Ebro Ads, 1976, and a poster in CJ-3Bs in the Sand.

Last updated 1 May 2005 by Derek Redmond redmond@cj3b.info
https://cj3b.info/World/SpainAviaBrochure.html
All content not credited and previously copyright, is copyright Derek Redmond