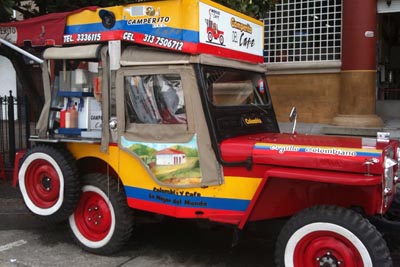 This coffee shop on wheels is a great symbol of the affection of the people of Colombia for the Willys Jeep. Thousands of the little workhorses are still working in the country, and being carefully maintained and decorated. 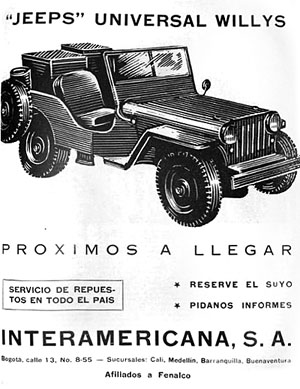 Unlike many places in the world, Colombia didn't find itself with a lot of surplus army jeeps sitting around at the end of World War II, so civilian Willys Jeeps were imported as soon as they became available from the U.S. This ad appears to date from before Colombian distributor Interamericana brought in its first batch of CJ-2As. The ad says "arriving soon; reserve yours; ask for information" and lists dealers in 5 cities.

Companies using the name Interamericana have come and gone over the years in Colombia and elsewhere, so it's hard to track down the history of the company. The ad claims an affiliation with Fenalco (Federación Nacional de Comerciantes) an umbrella organization formed after the war to promote trade and resist over-regulation by government. Interamericana was clearly one of a number of importers around the world who were able to step in and take advantage of Willys-Overland Export's slow progress in setting up its own subsidiaries overseas. (See CJ-3Bs for the World on CJ3B.info.) 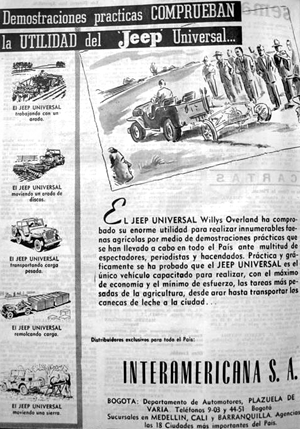 A slightly later ad published by Interamericana appears to still date from the CJ-2A era, but now mentions dealers in 18 cities. Like much of the Willys-Overland advertising in North America at the time, it aims at the agricultural market: "Practical demonstrations prove the utility of the Jeep Universal." It goes on to say the Jeep Universal can handle "the heaviest tasks of farming, from plowing to transporting milk cans to the city."

But Colombians quickly decided that Jeeps were good for more than just farming. A 1950 photo by Gabriel Carvajal Pérez shows a CJ-2A at a construction site (80K JPEG, photo courtesy of Biblioteca Pública Piloto de Medellín para América Latina.) And people seemed to enjoy just driving them. Colombia was also importing big, fast cars (see the photo below) but many of the country's roads were better suited to a Jeep. 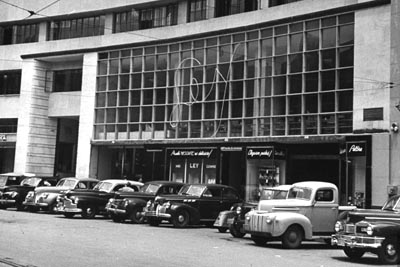 The earliest photograph I've seen of a CJ-2A in the country is this July 1947 LIFE magazine photo by Dmitri Kessel, in which you can spot a couple of them parked outside the fashionable Ley department store in downtown Medellín, a city of over 300,000 at the time (over 3 million now.)

The Ley chain of stores had been founded in Medellín in 1922, and named for the initials of its founder, Luis Eduardo Yepes. 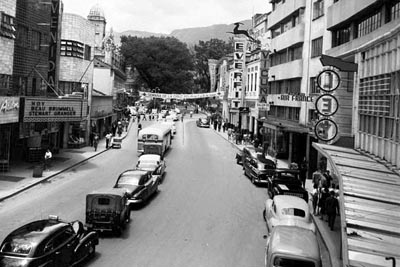 Outside the same store in 1955, a Jeep with full Willys soft top drives down First of May Avenue. Just across the street, Elizabeth Taylor and Stewart Granger are starring in the movie Beau Brummell (50K JPEG) at the Avenida theater, and down the block is the clothing manufacturer Everfit, another company founded in Medellín. (Photo courtesy of Biblioteca Pública.) 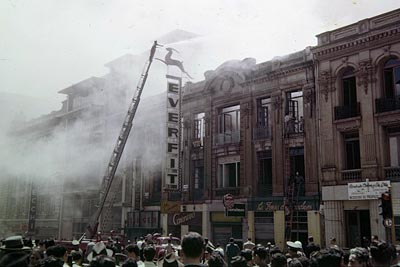 In another photo of the fire (90K JPEG) the "LEY" sign can still be seen in the background, so this fire occurred just before Ley changed its name in 1959. (Photo by Gabriel Carvajal Pérez, in Incendios y desastres naturales.)

We can't quite see through the crowd whether the Bomberos' Jeep Fire Engine may have been present at the fire. 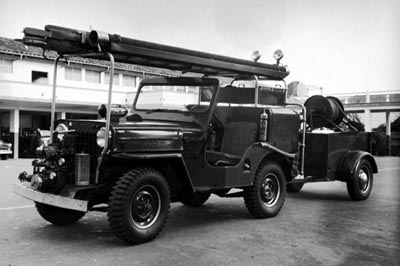 A picture taken at the Los Libertadores Station of the Bomberos de Medellín in 1958 shows their Howe CJ-3B Jeep Fire Engine. Many of the fire Jeeps built by Howe Fire Apparatus at their factory in Anderson, Indiana were exported. (Photo by Diego Garcia Galeano, courtesy of Biblioteca Pública and Cuerpo de Bomberos.) 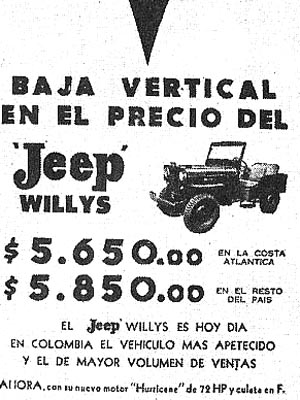 When the high-hood CJ-3Bs arrived in Colombia, they immediately became popular for their more powerful Hurricane engine, perfect for hauling agricultural produce in the mountains. People could now drive to places previously accessible only by horse or mule (see Colombia, 1965: First Vehicle on the Farm.)

This 1953 ad is promoting a big drop in prices, presumably from what was being charged for advance orders. It claims the Jeep is the country's "most coveted and highest selling vehicle." You can save $200 by picking it up at the dock, probably in Cartagena, 400 miles north of Medellin (see the map of Colombia, 250K JPEG). 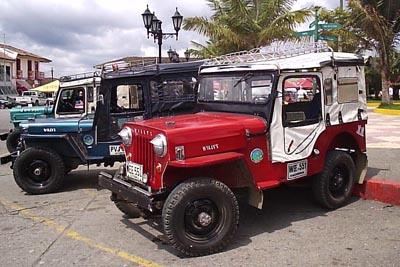 Ricardo Suárez in Bogotá told CJ3B.info, "Some people say that there are around 30,000 (pretty exaggerated number, I think) working Willys Jeeps in Colombia, and most of them are located in the Zona Cafetera, the coffee-producing area (see the map of Colombia, 250K JPEG). About 85% of them are good old CJ-3Bs, followed by CJ-3A, CJ-5 and CJ-6 models (40K JPEG).The CJ-5 is known here as 'oreja de perro' (dog's ear) -- pretty interesting nickname." 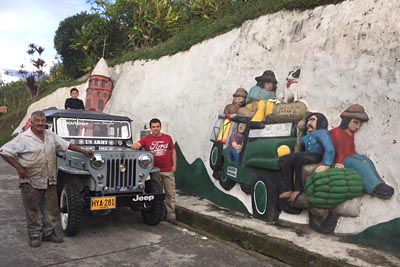 Ricardo says, "They are often used as rural taxis and almost every small town has its own annual parade. They transport coffee and bananas and they are always loaded to the top. People call a fully-loaded Willys a yipao and the term has been also applied as a measurement unit. Don't be surprised if you hear people talking about two yipaos of coffee. (See also Java Jeeps in Colombia.)

In this photo Ramírez Restrepo poses with his Jeep beside a yipao sculpture in Calarcá, home of the country's largest Yipao Festival. 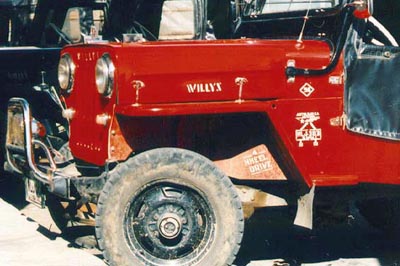 The logo painted behind the front fenders of this 3B is that of a rural taxi company based in Santa Rosa de Cabal. Note also the "4 WHEEL DRIVE" stencil inside the fender. Photo by Ricardo Suárez. 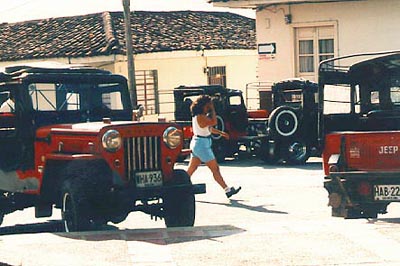 "You can find a lot of almost-original parts for the CJ-3B in Colombia. There are places where steel body panels are made. Prices vary according to the part needed. You can buy the complete body (14 gauge steel) for about US $1,800 or less. It seems that the person that produces the body panels bought machinery from a factory called EBRO in Spain. They don't have the Willys logo -- instead, they have an EBRO Jeep logo in the same places." (See the "JEEP" stamping on the tailgate in this photo.)

The name "Willys" went back into production in Colombia from about 1995 to 1999, capitalizing on Colombia's affection for the many older Willys Jeeps still in use in the country. A company formed as Willco ("Willys Colombia") produced several Jeep models, including a CJ-3B body on both short and long wheelbases. Willco used a Hercules 4-cylinder engine exported from the U.S. by Tapco International, and drivetrain items from VIASA in Spain. The chassis and body were fabricated locally -- possibly with some connection to the EBRO tooling mentioned by Ricardo above -- and other parts including the square headlights were also sourced in Colombia. 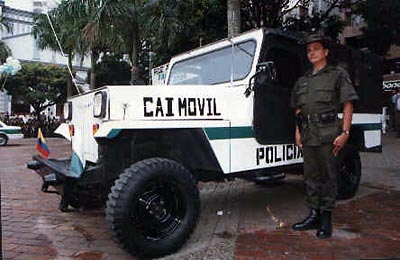 The Willco models were purchased by police forces and others who could afford them. This example was part of one of the "CAI Movil" units -- Centros de Atención Inmediata Móvil ("Mobile Immediate Command Centers") -- of the Policía Nacional.

The long-wheelbase Willco came as a soft top and a stake-bed truck (20K JPEG). See also side-view drawings of both versions, 40K GIF). A more radically different model was a small passenger van, built on the same frame. 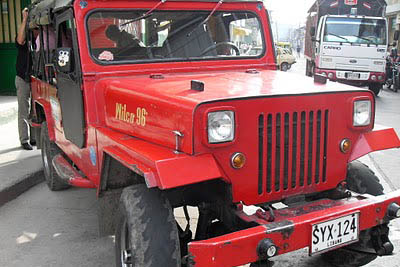 Unfortunately there were significant quality control problems, and the Willco vehicles did not stand up well. Reportedly several hundred were built before the company folded, but few seem to have survived.

A company in Mexico offered to make the Willco U.S. legal, with a new Ford 1.7L, 88 hp 4-cylinder engine and power assist brakes, for US$5,100 on top of the reported purchase price of US$13,000, but I don't know whether anybody took them up on it. 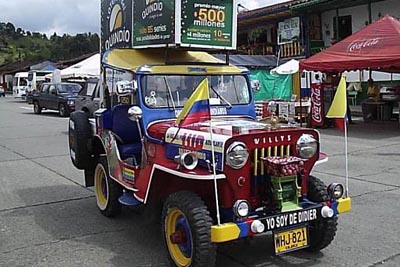 People in Colombia like to decorate Jeeps. This CJ-3B is promoting a lottery, in Salento, Quindio, Colombia. Sebastian Lobo-Guerrero, who took this shot, says, "Salento is an amazing small town full of Willys tradition and great history." 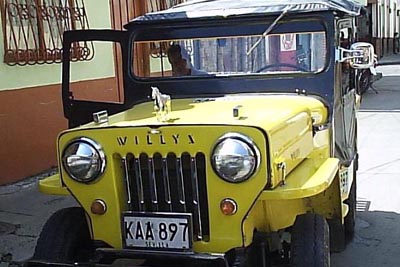 Sebastian saw this Jeep with a popular hood ornament, and chrome trim on the grille slots, in Montenegro. This may also be the only 3B I've seen with chrome hood blocks.

Besides unique Jeep accessories, Colombia was one of the first places to sell a detailed scale model CJ-3B, part of the "Cars We Love in Colombia" series. 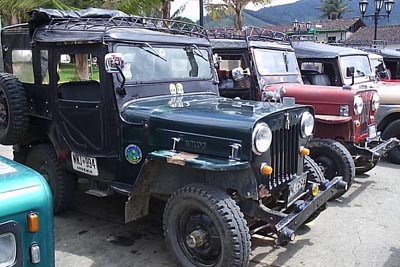 From Salento, here's another 3B with a horse on the hood. Roof racks which ride above the soft tops are a popular and useful accessory. 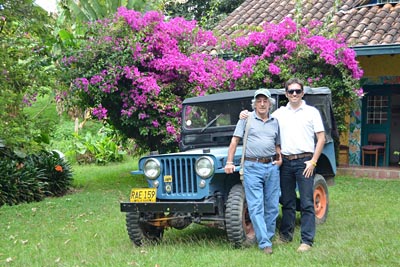 Sebastian's father Gustavo has a CJ-3A in Antioquia. "This 3A has been in my family for 18 years, and we have many good memories around it. Willys in Colombia are part of our lives, childhood, and hopefully future. I am not sure if there is another country where these cars mean so much... the fabric of our lives!" 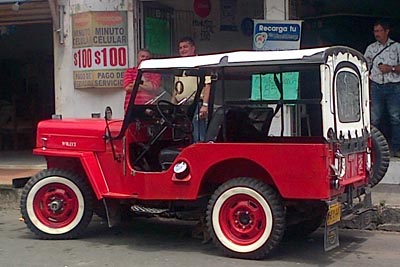 "My dad spotted this nice, longer than normal 3B in Villavicencio. It seems to be used for work or a daily driver -- the yellow plate means it is registered as a regular car. The white top looks nice and goes well with the tires. It also seems there is a dog or a cat underneath." 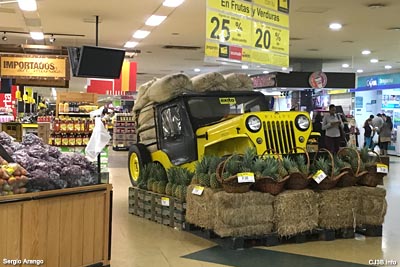 Here's a good demonstration of the appeal of the Willys in Colombia. Sergio Arango sent these photos of a CJ-3B being used by retail giant Éxito to attract attention in the produce section of a supermarket. 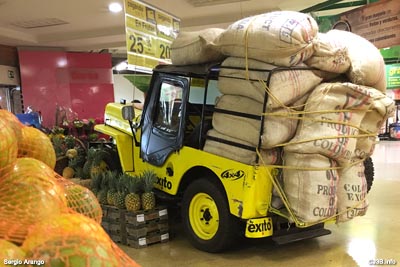 The Willys is a popular symbol of the country's agricultural sector. The huge load of sacks of fruit or coffee beans is often seen in the Yipao Willys Festivals of the Zona Cafetera.

Thanks to Sergio for the photos. 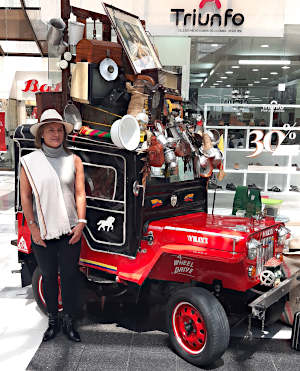 Jose Ricardo Bateman sent this photo of another CJ-3B on display at a shopping center. But this one is a mini-Jeep, carrying a mountain of household items, another traditional load seen during yipao parades (see Yipao Festival in Calarcá.) 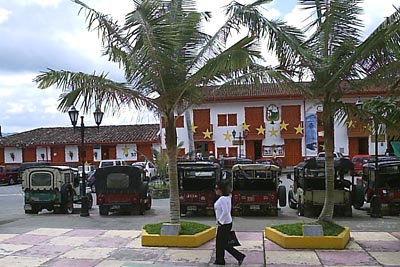 Here's hoping that Colombians can keep their Willys Jeeps going for another 50 years. I don't think I would complain if some new technology replaced the Jeep as agricultural transportation, much as the Willys itself replaced the mule many years ago. The Jeeps deserve their chance to retire and be driven only for pleasure (see Willys on the Farm in Colombia.) And I'm sure the cultural tradition of the "yipao" will continue.