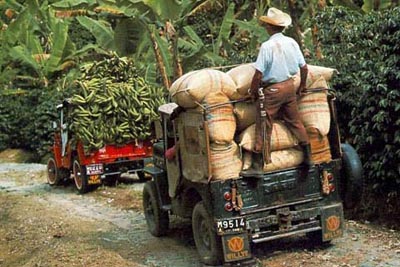 If you had a cup of Colombian coffee this morning while you read the newspaper, the chances are good that those coffee beans made part of their journey to your breakfast table, in the back of a flatfender Jeep.

Here two CJ-3Bs loaded with bananas and coffee head down to market from the mountains, in the Zona Cafetera (coffee zone) -- see the map of Colombia (250K JPEG). 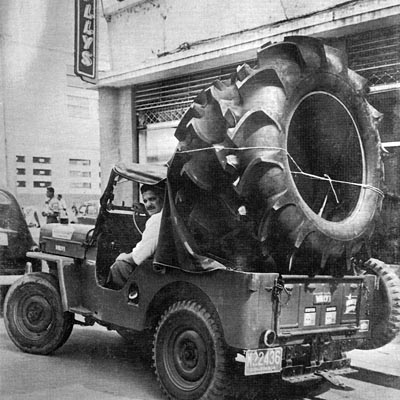 Thanks to Sergio Arango for this great photo from a 1958 Willys dealership publication. It was taken outside the dealership in the city of Cali, and the Jeep is loaded with two Icollantas agricultural tires headed to a farm in Valle del Cauca, on the southeastern fringe of the Coffee Zone.

Icollantas (Industria Nacional de Llantas S.A.) was a Colombian tire manufacturer established in 1942. BF Goodrich acquired a controlling interest in 1969, then sold it in 1998 to Michelin, who closed the two Icollantas plants in 2013. 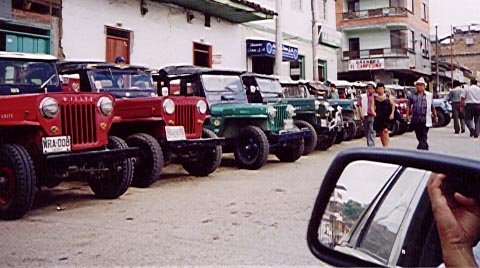 Jose Ricardo Bateman writes, "Here in Colombia in the Departamento del Quindío there are more than 3000 Willys Jeeps, most of them 1953-54 CJ-3B models. They say this is one of the places in the world where the most Willys are still working.

"This photo was taken in a small town called Montenegro. As you can see this is just one of the four sides of the main plaza of the town, and there are Willys parked all around the plaza." 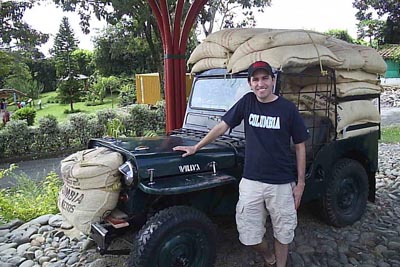 "One of the annual festivals is called Yipao, a word that comes from 'Jeep' pronounced in Spanish. In every yipao many Willys owners take to the streets to show their Jeeps and how much they can carry. They put so much weight on the car that the front wheels hardly touch the ground."

This photo of a CJ-3A shows Sebastian Lobo-Guerrero visiting the Parque del Café, a theme park dedicated to the Colombian coffee tradition. 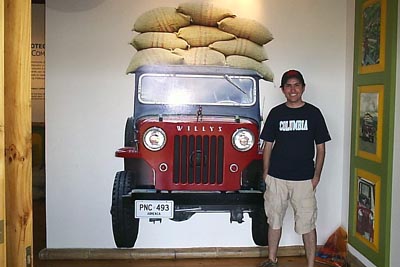 Here's Sebastian with another display at the Park. He says, "One of the attractions of the Park is a 3D movie that shows a red 3B following the different steps on the production of coffee. The movie even shows how the 3B is an essential part of the process but is also used to take the kids to school, get to the bank, buy groceries, etc." 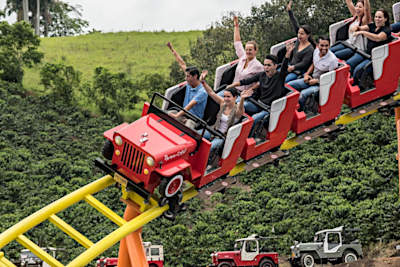 The park has been expanded in recent years, and as of 2020 features amusement park rides including the Yippe roller coaster! See Parque del Café at Wikipedia.

These photos, courtesy of Ricardo Suárez and Jaime Gaviria, were also taken in the coffee-growing region. One photo shows Jeeps lined up outside the "Bancafe" or "Coffee Bank," which is found in most towns.

This photo captures the mood of a hot afternoon -- the Jeeps wait while shoes are shined in the shade of the trees in the town square. 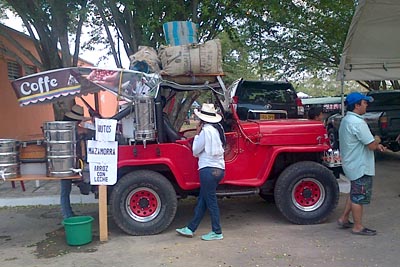 Sebastian Lobo-Guerrero's dad spotted this coffee shop on wheels. Sebastian says, "Note the 'coffe' sign, the wrong spelling in English, or it should be café in Spanish. The top white sign saying minutos means cell phone minutes -- see the lady using the phone for a call.

The middle white sign offers mazamorra, a local dish that not everyone dares to try. Not that easy to find these days, and not really recommended if you have an afternoon full of things to do; most likely you will need a long nap after eating it. The bottom sign arroz con leche, meaning rice pudding, sweetened to perfection. It can not be more Colombian than this!" 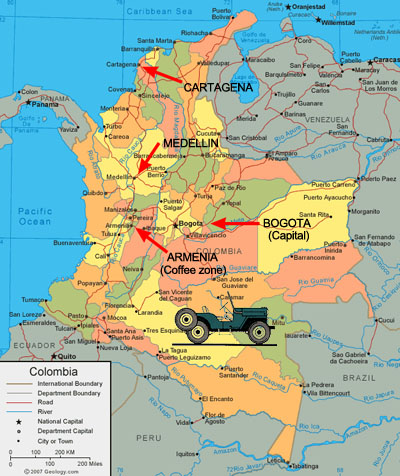 The mountains of Colombia are part of the Andean Volcanic Belt, and there has been seismic activity including several major earthquakes during the 20th century. The 1985 eruption of the Nevado del Ruiz volcano killed 23,000 people (see Dante's Peak on CJ3B.info for more details.)

The Armenia, Colombia earthquake of 25 January 1999, was actually centered southwest of the city of Ibagué, which is known as the "Music Capital of Colombia." The quake had a magnitude of 6.2, and was felt as far away as Bogotá (Wikipedia). The heaviest damage was done in the nearby city of Armenia, in the Department of Quindío, the heart of Colombia's coffee-growing region. Armenia is now well known as the location of the biggest Yipao festival celebrating the Willys Jeep. 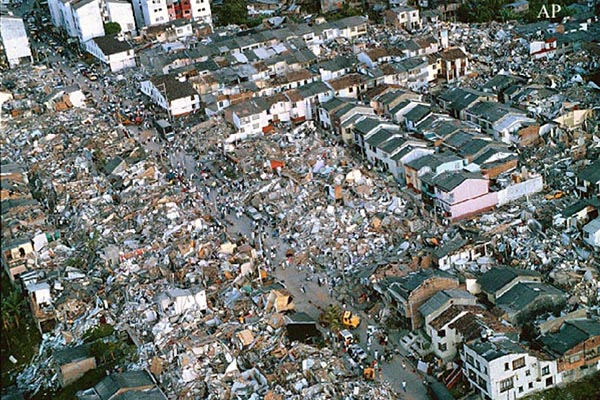 An estimated 1,900 people died, and thousands more were injured, when the earthquake struck on a Sunday afternoon, badly damaging coffee farms as well as cities. More than half of Armenia's population of 270,000 was displaced. Many single-story homes of older masonry construction collapsed, along with apartment buildings, churches and hospitals. (AP Photo)

The effect of the earthquake on the lives of the residents, is still felt in Armenia and the Quindío area of Colombia. 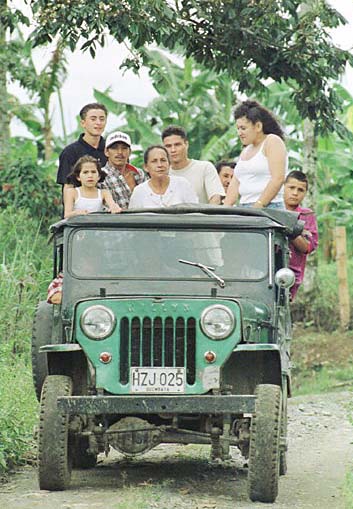 Around the world, Jeeps are often called in to help with transportation during earthquake rescue and recovery operations. In Quindío there were already thousands of Willys Jeeps in the area, ready to continue carrying people and supplies.

The AP caption on this photo reads: "A Willys taxi ferries passengers on a back road to a farm near Calarcá, Colombia, Feb. 6, 1999. It was no surprise to see the workhorse Jeeps pitching in following the Jan. 25 earthquake. Throughout the western coffee growing region of Colombia, the boxy, plodding, gas-guzzling Willys is a mainstay of rural transportation." (AP Photo/Jaime Puebla) 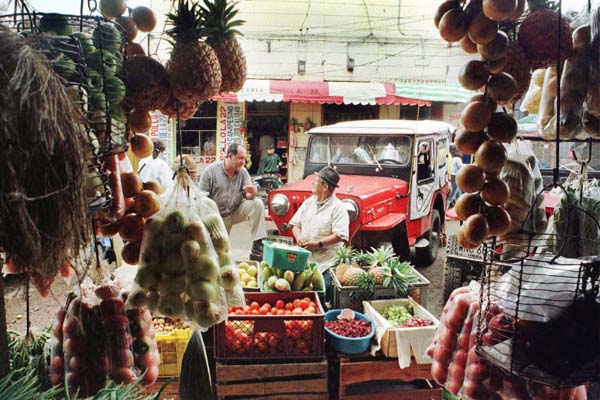 "A Willys Jeep driver talks to a fruit andvegetable vendor in Calarcá, Colombia, a city hit hard by January'searthquake, Feb. 6, 1999. Prized by collectors in the United States, theJeeps are also the object of cult-like devotion by those who own and drive them in Colombia, mostly humble farmers and taxi drivers." (AP Photo/Jaime Puebla) 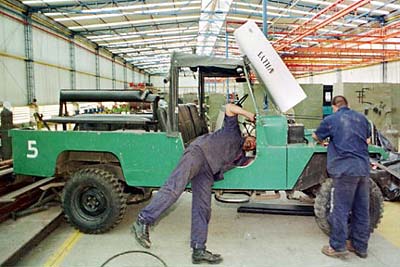 "Feb. 8, 1999, at a factory in Armenia, Colombia, the city hit hardest by January's earthquake, workers repair a Willys Jeep produced two years ago for Colombia's anti-drug police. Headed by a Colombian engineer who once designed chassis for General Motors, Willys of Colombia (Willco) hopes to cash in on the reputation of the original Willys Jeeps during a half-century of use on Colombia's unforgiving backroads." (AP Photo/Jaime Puebla)

See more on the Jeeps built by Willco in the 1990's in Colombia Loves Willys on CJ3B.info.


Thanks to Jose Ricardo Bateman, whose Jeep was perhaps the first CJ-3B to arrive in Colombia. It was purchased in November 1952 and brought to Colombia in that month (see 1953 CJ-3B Owners and Photos).

Thanks to The Associated Press for Jaime Puebla's photos, and to Bob Christy for finding them. Thanks also to Sebastian Lobo-Guerrero and Sergio Arango. Map of Colombia courtesy Geology.com. -- Derek Redmond