Willys on the Farm in Colombia 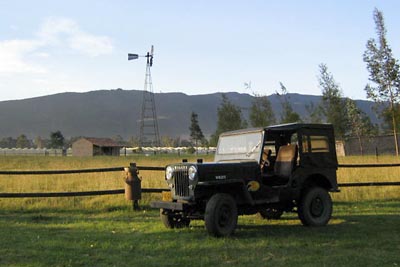 Sergio Arango works in Bogota, Colombia but has a farm about an hour from the city, with some horses and dairy cows. There's lots of work to do on the farm but it's also a place to relax away from the pressures of the city. Sergio has found the perfect vehicle to help him do both;   as he puts it, "It's better to have a CJ-3B, than to go to the psiquiatric." 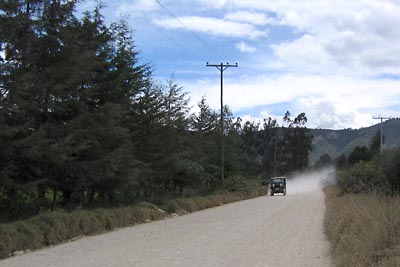 Like most Jeeps in Colombia, it has a working history. Sergio says, "It was imported bu Leonidas Lara Co. for the Colombian Coffee Corporation. Its original plate number is from Medellin, a city near the most important coffee area. Thirty years later the Jeep was purchased by a very old man who had a wheat combine and some tractors and bulldozers, and the Jeep was used to carry the fuel to the work sites. I think it has more or less 500,000 miles." 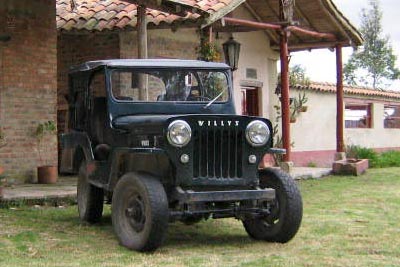 This picture, taken shortly after Sergio bought the Jeep in June 2005, shows some of its small problems; a broken front bumper and missing hood blocks.

He says, "I always wanted a CJ-3B but it was impossible to have one, so I bought a 1955 CJ-5 that I converted into an M38A1 (90K JPEG). Ten years later the CJ-3B was for sale so now I'm the proud owner of this CJ-3B, named by me 'Marco Aurelio' because all the cars and tractors have a name. You see it just exactly as I bought it." 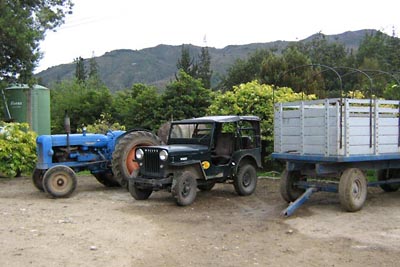 "I expect to improve its condition during this year. It is running good, but I have to work on the frame and brakes. I'm sure I'll enjoy it a lot. You can believe me that it will have a very nice restoration so that it can run very well around our hard, sandy and dirty roads. In two months I will send you some pictures of the back -- right now it's ugly!" 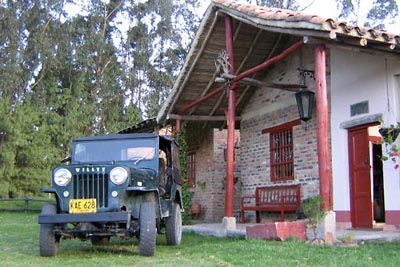 As of 2006, the Jeep got a new bumper and hood blocks, and is licenced. Sergio also has a rear-view mirror ready for installation, and he's thinking about 600x16 tires on yellow rims. 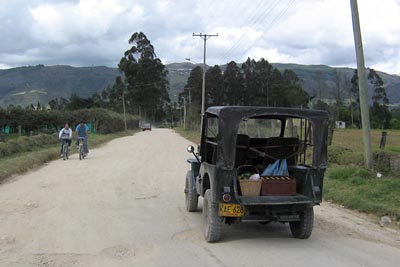 As he promised, Sergio did send a photo of the rear end of the Jeep, with the comment, "The Jeep every weekend has to go to the marketplace for some food, gasoline, oil, drinking water and everything we need." 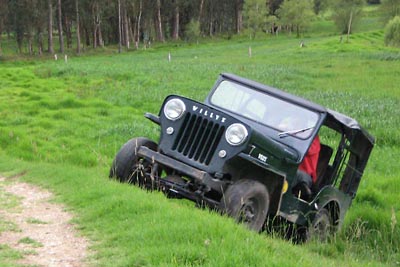 This photo of Sergio in one of his first off-road jaunts with the 3B, was a 2006 cover photo for CJ3B.info. 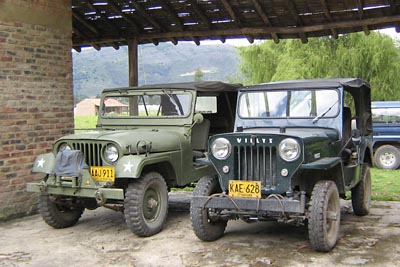 The Willys military and civilian cousins make a nice pair. Sergio's family has a Jeep history -- he also has a Jeep pickup (200K JPEG) similar to the one his family owned in 1964 (110K JPEG). Not to mention the Liberty (160K JPEG).

For some historic action photos featuring Sergio's uncle driving his own CJ-3B, see Colombia, 1965: First Vehicle on the Farm. 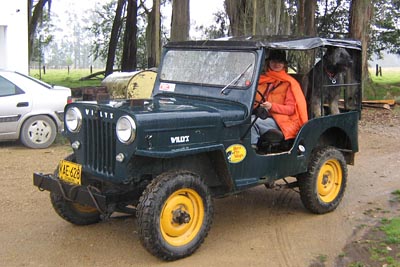 Marco Aurelio finally gets his yellow wheels! In 2009 Sergio found four original Willys rims which he restored and painted.

Maybe more of us should think about colored rims. By the CJ-3B era, Willys had standardized on white, black or body color rims, but the bright contrasting wheel colors are one of the fun things about CJ-2As that we could try, when we're not doing showroom restorations.

Thanks to Sergio for his photos. -- Derek Redmond

Return to Jeeps Around the World or to 1954 CJ-3B Owners and Photos.