Yipao: The Willys Festivals of Colombia 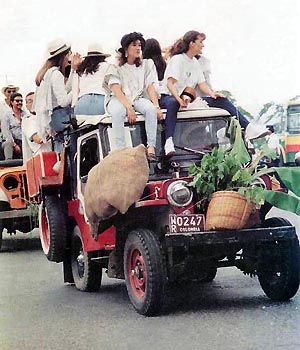 I have posted some photos in the past of CJ-3Bs in Parades, but this page shows what is undoubtedly the ultimate Willys parade. The "Yipao" is held annually in cities in Colombia including Armenia, which is home to possibly the largest and most famous of the festivals that celebrate the prowess of the early-1950s Willys Universal Jeeps that carry the coffee beans and fruit to market in the mountains west of Bogota.

The photos on this page were sent by Jorge Diaz, who says they were taken in Armenia in 1996. See also a map of Colombia (250K JPEG). 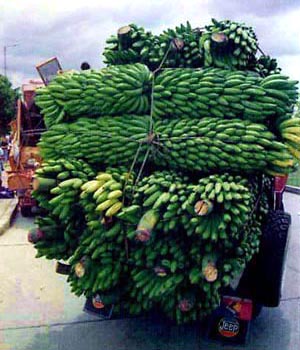 On the right is a rear view of a CJ-3B loaded with bananas. What does the front of a Jeep carrying this many bananas look like? See below: 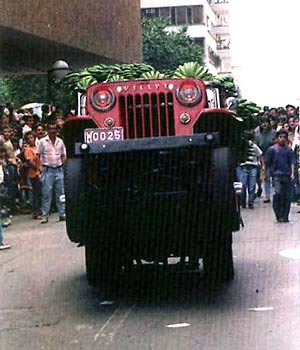 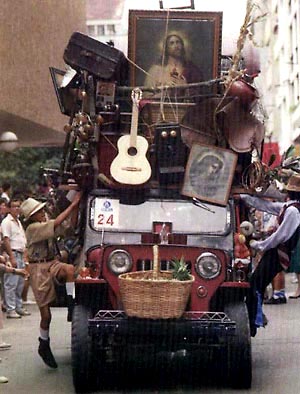 Another popular way of loading a Jeep for the parade is with furniture and antiques representing all of a family's possessions. It looks like the uncles are just able to keep the front wheels of this one on the ground. 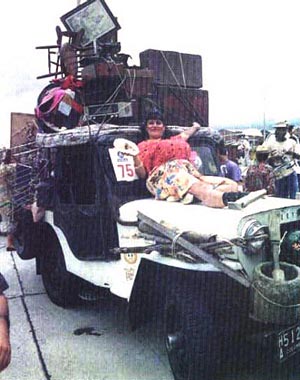 On another Jeep, Mama rides on the hood (or is it another uncle?) 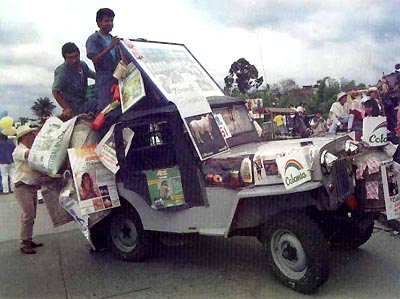 Although this 3B is really sagging under bags of coffee beans, the loads carried by the Jeeps at the Yipao are not all that much bigger than what they carry at work; see Java Jeeps on CJ3B.info.

Jorge Diaz says there are Yipaos all across the coffee-growing zone: "They are going to have another one in December 2001 in a little town called Quimbaya, which is just a few miles away from Armenia." 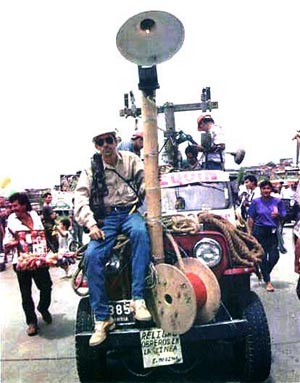 Also from the Armenia parade: an entry from the local utilities workers. 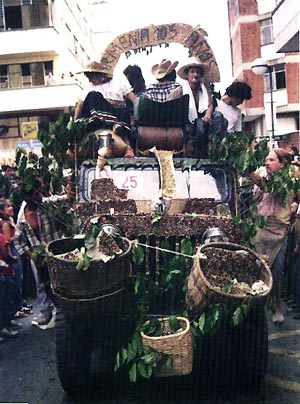 Spot the Willys in this photo! One group of farmers has completely covered their Jeep with coffee beans.

Jaime Rudas explains that the Willys Jeep "was used by the 'caficultores' because it was the only vehicle able to take great weights on the lofty and narrow pack-animal roads of the coffee zone. Today the roads have improved, but the farmer continues to use his old Yip which is part of the culture. At the Festival of Yipao, the Yipes are overloaded with more than one ton of knick-knacks, to demonstrate the great strength of the vehicles." 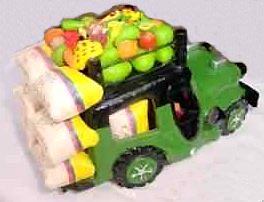 Maybe Colombia is the real origin of the pottery souvenir toy Jeeps which are sold in various South American countries. Some of them seem clearly based on the Yipao. See also a handmade tin toy (30K JPEG) brought from Colombia by Jorge Diaz.

Thanks to Jorge for sending the photos. Thanks also to Jaime Rudas and Jose Ricardo Bateman. -- Derek Redmond

In the years since we first revealed Yipao to the world with this web page in 2001, many other pages have appeared with more photos and videos of these entertaining and beautiful festivals.