This is a great story about an interesting pair of Jeeps given a new lease on life by Hein Prinsloo and his friends and family in Queensland, Australia. This Willys CJ-3B was certainly one of the first to arrive in Australia, a 1953 model brought over for the Army, wearing the same government ID plate used by Willys on Jeeps delivered to the U.S. military. And the Mahindra is apparently one we have encountered before on CJ3B.info -- it had been abandoned brand new in about 1990 and left to simply sit in the weather for years when the Australian distributor went broke (see Real Life Mahindra Marketing Tales.) Here's Hein's description of getting this pair back on the road. -- Derek Redmond 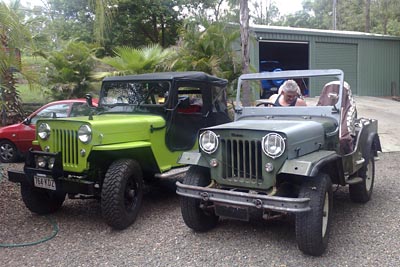 Over the past 4 years I have had many a pleasant hour driving around in the '53 CJ-3B (on the left in the photo) which I bought over in Perth, Western Australia. But since I live right on Moreton Bay in Queensland, the salty sea air had also been busy, and the time finally came when the inevitable rusty-spots could no longer be ignored.

I am currently working across on the North Western coast of Australia, and home is about 6000km away as the crow flies! I work away for 4 weeks at a time and only have a week of R&R, so, much as I was itching to do a complete frame-off rebuild myself, the work had to be farmed out to the professionals. I suppose I cannot complain too much, as this work is paying for the restoration, and doesn't she look sweet now, in her lime-green paint. 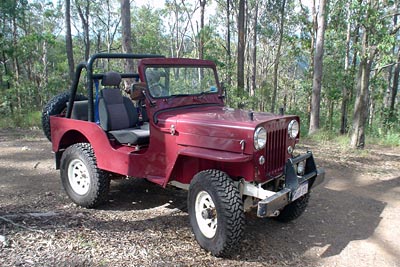 After a little investigation I had found both a workshop and panel shop with owners who are keen restorers of older vehicles of their own. I drove my partially-stripped baby in her dark red paint over to the mechanical shop, in the middle of 2008. First order of business was to replace the sloppy and worn steering-box with a rebuilt unit (a straight swop from an early Holden, originally done as part of the right-hand-drive conversion for the Australian Defence Force.) Then the brakes got a new master cylinder and all wheel cylinders had new kits installed, the brake linings were replaced, and all wheel bearings re-packed and oils changed in both axles. Next up was the clutch, and sloppy gear linkages on the transfer case.

After giving the motor a thorough check-over, it was decided to leave that in place and rather pull both the boxes once the tub came off. I have a spare motor and both boxes from a Jeep wrecker who scrapped another CJ-3B a few years ago, and these units were considered for rebuild, but eventually we decided to rather just refresh my originals and avoid any surprises. 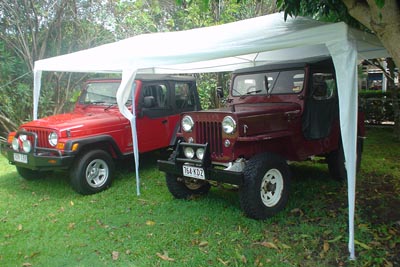 The old girl had a serious list towards starboard since I bought her, no doubt a carry-over from her previous harsh treatment at the hands of countless troopies or diggers as they are called here, and more than a few lunatic farmers hunting Roos! So it was decided to also change out all the tired springs, shocks and shackles. what a difference to ride quality this made!

All spares were obtained from the friendly people at Marathon Spares in Tamworth, New South Wales. Neil sources parts for flatfenders from the US, Philippines, etc. and is a valuable resource for any Willys owner! It is easier getting spares for my 3B than it is for my 50-year-younger Wrangler. 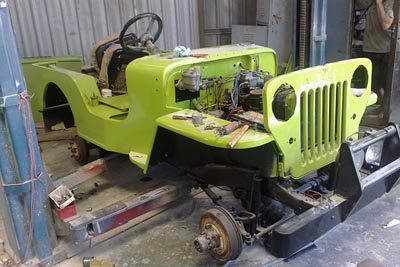 Then it was over to the panel shop for a complete strip-down and sandblast to asses the extent of metal rot and de-bog some previous mischief -- what a sad sight this was! There had obviously been many a violent incident over the long years, all just made worse by the last few years of relative luxury living at the seaside. Almost every panel had some damage somewhere from a previous incident -- these were carefully cut out and replaced before paint-prep could begin.

The lime green and black colour combination was chosen by my dear wife, and I agreed with some serious misgivings. When it all came together I was very pleased, and judging by the many thumbs-up and smiles and waves received from old and young, there are many other people around who agree with her. After the body and chassis were reunited, it was back to the mechanic for a last round of fettling and adjustments, and on the 24th of December 2008 I couldn't stop grinning when I picked her up and drove her home for the first time in 6 months! 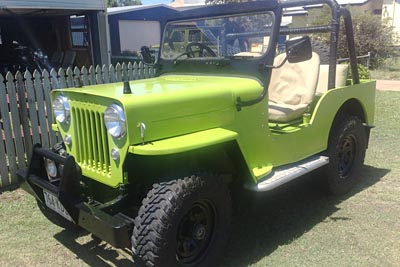 Despite the cramps in my wallet that was suddenly a few thousand $ lighter, I couldn't wait to start on all the little finishing touches the following morning. First came the fitting of my Bestop, then making an old 5.0 Browning ammo case into a trick centre-console for all the loose odds and ends that always need a place. My wife got busy painting the remaining bits like petrol cap, steering wheel, and lettering on grille and tailgate, quite a painstaking and time-consuming process to do neatly. 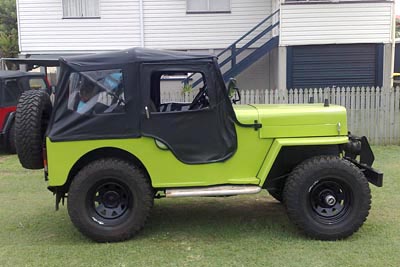 Last but not least was re-doing the seats in a darker colour. They were re-covered about a year ago, but the colour was too light from the start and had to be cleaned constantly. After a bit of experimenting with blending different dyes, we finally got it to a nice dark green tint that fitted in nicely and wouldn't get dirty so easily.

I have been sent the original "Australian Army Manual for Willys 1/4-ton Utility Truck" by a friend, and therein they show the ID plates used, identical to the one on mine (80K JPEG). The next step would be to try and trace some of its heritage and history, using the ID number and whatever Army archives I can find. 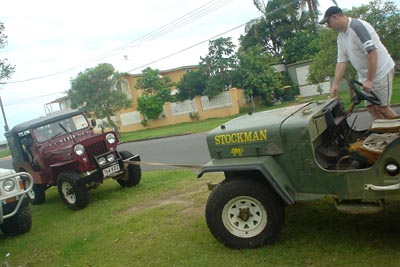 Meanwhile I came across another Jeep, this is in a somewhat more dilapidated condition. It had been partially dismantled by several previous owners, who had managed to lose the whole instrument cluster, and even worse the entire diesel timing pump. I managed to locate a local Mahindra dealership on the Sunshine Coast in Queensland, where I now live, but they had nothing to do with the earlier efforts to bring these vehicles here, and had no knowledge or spares available. 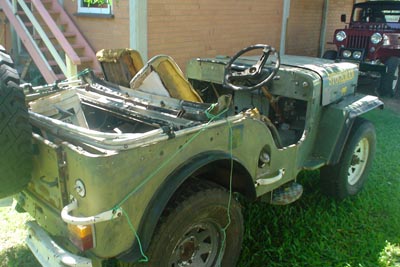 Reading up on Mahindras, on CJ3B.info, I realised that the photos posted by Jon Rogers in the 1990's could very well be of my vehicle, as they were taken near to where I found this one a decade or so later. There is very little left of the soft top, except for the bows and a few torn sections of white vinyl on very rusty remnants of the door frames. The tool box and mesh grille guard are missing, although evidence of their presence can be seen on the body. The same faded colour scheme is still there, and the same type of tyre is still on the spare wheel! 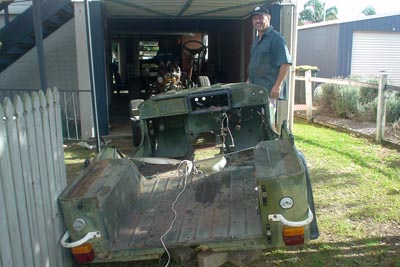 The Mahindra was dismantled by my retired dad -- he was over here on holiday from South Africa and needed a reason to stay in the shed and keep him busy and away from the women in the house, who were driving him nuts. The whole family had to be called together to lift off the tub.

When I decided to take on this position so far from home, I offered the Mahindra to a mate who had far more leisure time and a yearning for a classic of his own. After a year he got it mostly together again, and could even take me for a spin up the road with a rope as a temporary hand-throttle, on New Year's Day! After seeing mine I think he is now amply motivated to get his on the road in the near future. (See the picture at the top of this page.) 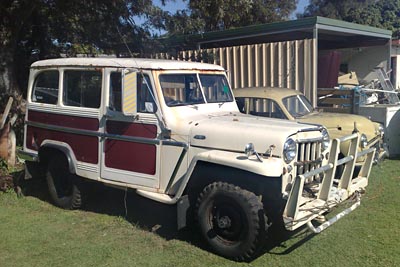 The family had one more addition when I was given this old Wagon. The mechanicals are in good condition. I drove it out from where I found it (and without any brakes to speak of, that was quite interesting) but unfortunately the body is completely rotten. All I have been doing for the past few months is to start it and let it run a bit every time I'm home. This wil be a major project and will have to wait till I am home again, or I find another volunteer to resurrect it perhaps? -- Hein Prinsloo

Thanks to Hein for his efforts, and for sending us the story. -- Derek Redmond