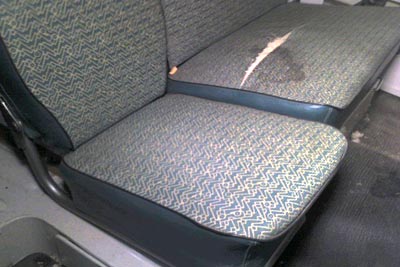 JD Custis sent a photo of the seats in his 1960 4x4 Station Wagon, which have a vinyl that is unique to Willys, and would look great on a CJ-3B. 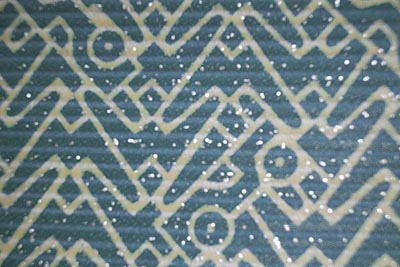 Take a close look and you'll see the design is obviously a Willys original, made up of a tiny "W" repeated thousands of times, and a tiny side profile of a Jeep repeated at different angles. Since it's obviously a CJ-3B, it would be strange if this upholstery appeared only in Station Wagons, but so far that is where it has turned up.

The white spots in the photo are actually metallic sparkles added to the vinyl. 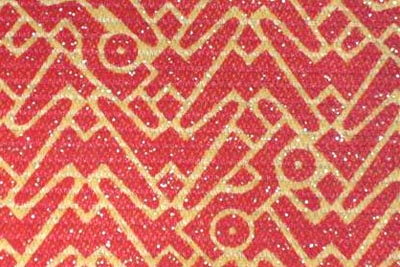 A red metallic version has also shown up in wagons. Scott Gilbert sent a photo of his NOS red seat cover (130K JPEG).

I discovered in early 2018 that SMS Auto Fabrics in Oregon has stocked a reproduction of this pattern for many years, in three colors (60K JPEG). Price as of early 2018 is $95 per running yard for a heavy vinyl (140K JPEG) including having the metallic flecks added. They estimate less than two yards to do a CJ-3B driver and passenger seat with solid color edges. It's not currently listed in their online catalogue, so contact them directly. 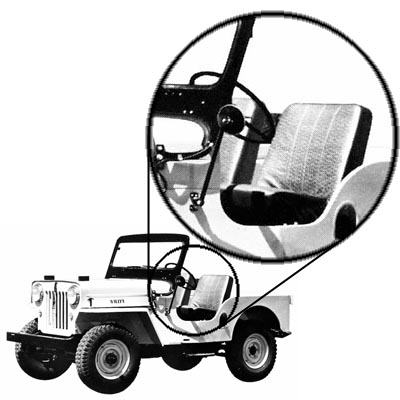 False alarm: I thought the upholstery in this advertising photo of a CJ-3B circa 1962 might have been the same patterned vinyl. But now that I've seen a larger copy of the original photo (250K JPEG) it's clear that this is not the case.

See the full story on this Willys Motors Advertising Photo. 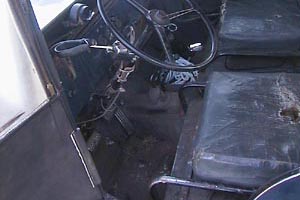 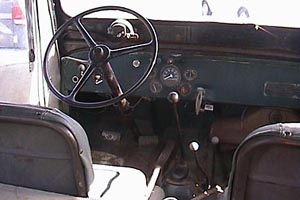 This photo of the '53 shows how the cushions on the early seats were attached to the seat backs, leaving the sheet metal supports exposed at the back.

Lawrence Wade took photos of the back and the underside (50K JPEGs) of the seats from his '55. 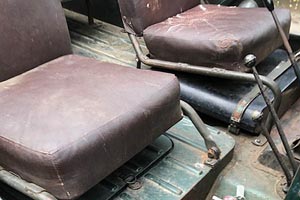 Some seats may have been done in Barcelona Red, as seen on the apparently original seats in Paul Wells' 1954 CJ-3B. 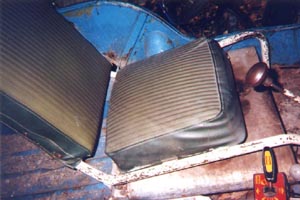 Chuck Izak took this photo of the unusual upholstery on his 1956 CJ-3B. As well as being the earliest example we've seen of the greyish green color, the seats are notable for their two-tone design and striped vinyl. 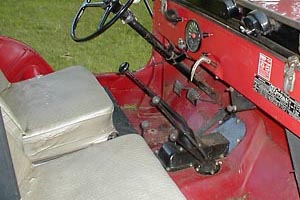 By the late 1950s the seats were fully upholstered -- the upper cushion was sewn to the lower cushion and enclosed the seat frame -- and had a slightly curved back, as on the early CJ-5 (130K JPEG). The grey-green color seems to have become the norm. The larger copy of this photo of Rolfe French's '61 reveals a cross-hatched pattern. A rear view of 1962 seats (100K JPEG) in John Belden's CJ-3B shows a similar pattern. 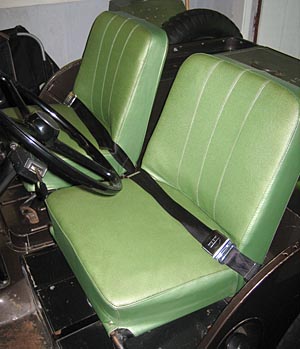 Ed Surjan took this photo of the original upholstery in his near-mint unrestored 1963 CJ-3B, plus closeups of the upper cushion front and rear (90K JPEGs).

The underside was open; see also a detail photo by Adam Charnok of the springs (60K JPEG) under the same 1963 passenger seat .

Fading with age, and photographic reproduction, can make it hard to compare the various shades of green, but a photo of the late Janet Wathen Clark driving a brand new 1961 3B (100K JPEG) appears to show a darker green vinyl. 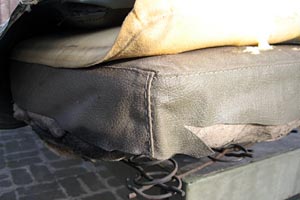 When Luis Mariano Paz removed the dark green replacement upholstery in his 1966 M606 in 2011, he found the original light green vinyl with an imitation leather texture.

See also the springs (140K JPEG) under the rear seat.

Seat covers and cushions are something that almost always need replacement if you're restoring an older Jeep. Years ago on CJ3B.info we published an article on Re-Covering Jeep Seats, using foam cushions and canvas or vinyl covers from Beachwood Canvas Works, who also sell covered bucket-seat cushions. There are other repro sources, usually for the early-style cushions. 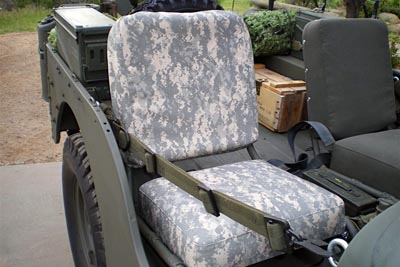 Many people go to local upholstery shops, but if you're looking for someone who specializes in seats for Willys Jeeps, you may also want to contact Jim Boswell at bozwell13@hotmail.com in Durango, Colorado. He can supply well-made heavy duty cushions covered in just about anything you want. See also a photo of the underside, and a closeup showing the stitching (100K JPEGs).

And of course you can contact SMS Auto Fabrics for that Willys vinyl with the tiny Jeeps on it!

Thanks to all the contributors. More information and photos are welcome. -- Derek Redmond