The Marx and Ideal play sets shown on our Roy Rogers Nellybelle Toys page, got me thinking about toy sets that include Jeeps. There have been other sets inspired by television shows: the "Gumby" animated series inspired a plastic set (30K JPEG) and an earlier tinplate set (25K JPEG). There was a small M*A*S*H Headquarters (80K JPEG) bubblepack with three plastic Jeeps, and an elaborate 1979 M*A*S*H Playset by ZeeToys (100K JPEG).

I guess I would define a "play set" as including some kind of character figures and items other than simply vehicles. Jeeps fit in well with this idea, since it's easy for little fingers to get little figures in and out of a Jeep. Here are a few other examples.

Jeeps bult for the GI Joe, Ultimate Soldier, and Soldiers of the World series of 12-inch action figures are reviewed in some detail on our 1:6 Scale Military Jeep Toys page. 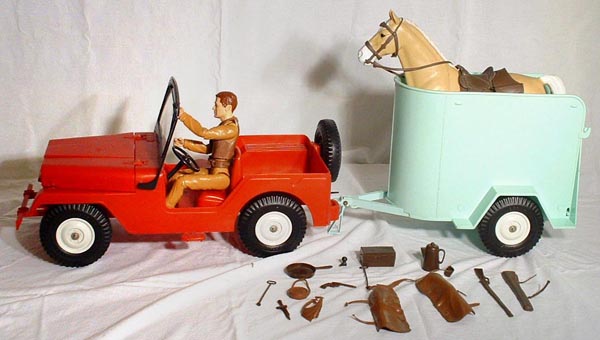 The popular Johnny West Adventures Series was an extensive line of action figures and accessories from Louis Marx & Co. The figures in this "Johnny West Ranch" set are copyright 1965. The Jeep, about 21 inches long, is a nice model of an early CJ-5. 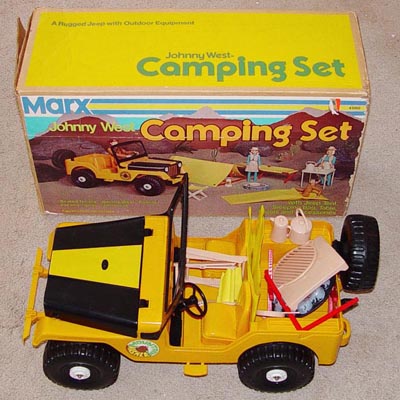 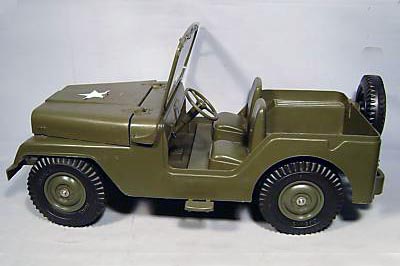 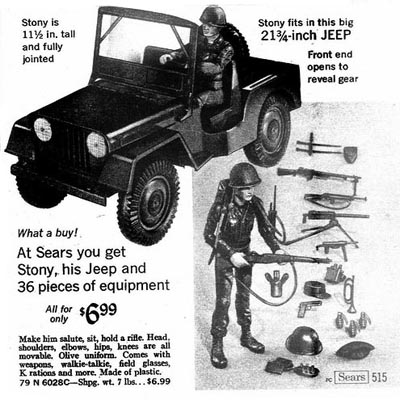 This 1966 Sears catalog shows what appears to be a slightly different Jeep, but the 1967 catalog (50K JPEG) shows the CJ-5 version (and the price has gone down by a dollar.) 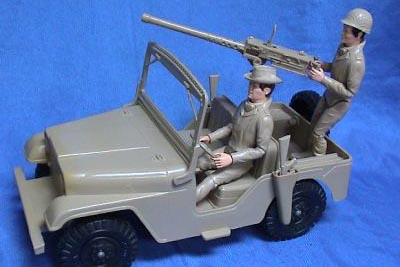 In 1967 Marx capitalized on the success of the Rat Patrol television show with a set of smaller (7.5 inch) action figures with a Jeep and accessories. Again the Jeep (even as represented on the box, 100K JPEG) was a CJ-5, although Rat Patrol was set in North Africa during World War II. 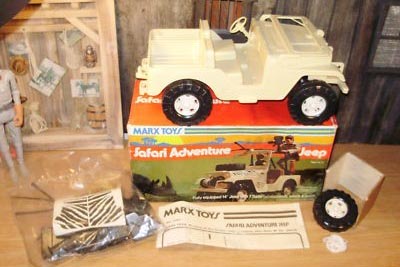 The smaller CJ-5 was molded in a tan color for "Safari Adventure" in 1975, sold as a series of separate models. I think the movie Hatari! had a big influence on this idea; the figures of Buck Hunter and Kim the photographer (60K JPEG) have a lot in common with the John Wayne and Elsa Martinelli characters in the movie. 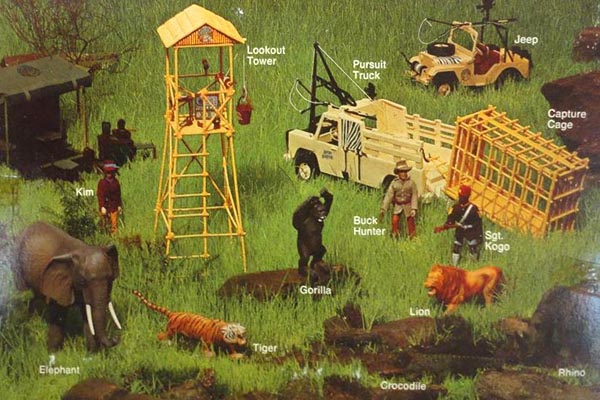 Like Hatari!, Safari Adventure also has a truck and a Jeep outfitted for catching animals, and the Jeep is even equipped with a movie camera. But there's no merchandising tie-in, because the movie came out in 1962, more than a decade before Marx released this toy. 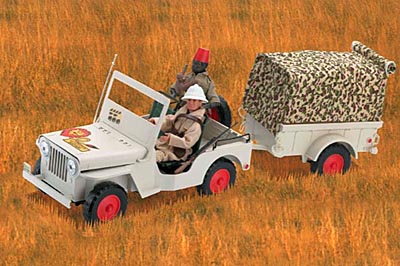 This Safari Jeep based on the Willys-Overland CJ-3A was from the Spanish toy company Madel. Their "Madelman" series was a huge range of action figures (80K JPEG) with accessories, originally sold in the 1970's. Some of the range was reintroduced in 1999 by Ideas de Juguete ("Ideas of Toy"), a firm dedicated to reissuing classic toys of the past.

The 1/11-scale Jeep was sold by Madelman in two versions, Safari and military. The re-release includes the "classic military" and a new Normandy Invasion edition (40K JPEG). Price is 23 Euros. The opening hood reveals a flathead engine; tires are rubber, and the tailgate and windshield are folding. The first models had plastic seats, which were changed to fabric in 1980. The Bantam trailer was first issued for the Safari set, and then was also made available in olive drab and green fabric top for the military Jeep.

See details on a Madelman Jeep Contest and a Willys Fire Engine Modeled With Madelman on CJ3B.info.

A 6-inch-long orange Jeep like the one seen here (20K JPEG) was one of the first Jeep toys I ever encountered which had the proportions of a CJ-3B. Because of the fish graphic on the high hood I thought it must be part of some kind of set, but only when Christopher Land told me about Fisher Price's "Adventure People" did I discover exactly what that set was:   "Northwoods Trailblazers," introduced in 1977 as #312 in the Adventure People series. The series, aimed at older children, included 34 play sets devoted to scuba diving, mountain climbing, space exploration, motor biking, parachuting and other adventurous activities.

The Northwoods Trailblazers set came with the Jeep (in either orange or yellow), a canoe with two paddles and outboard motor, a blue cloth tent with plastic frame, and two figures: "Brad" with brown shirt and tan pants, and "Hawk" with white shirt, green pants and red hat. 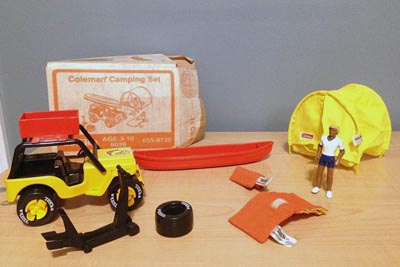 Tonka may have taken some inspiration from Fisher-Price for their Coleman Camping Set from the early 1980s The Jeep was in pressed steel rather than plastic, but it came with a plastic canoe and figures, plus fabric Coleman tent and sleeping bag. For some reason it also included a jack and removable wheels. 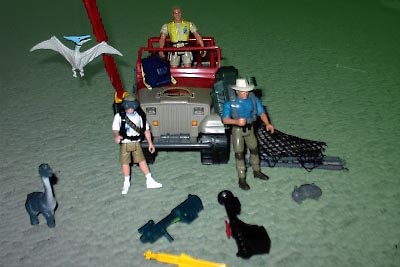 In a much larger scale (approx. 1/12), Tonka offered a "Jurassic Park" Wrangler playset, as a tie-in with the 1993 movie. It included various small dinosaurs and pieces of dinosaur-catching equipment. As far as I know, this is a unique rectangular-headlight Tonka Jeep YJ. It's labelled "Universal Studios", distributed by Kenner, division of Tonka Corp.

There were of course other Tonka playsets -- see for example Smokey Bear in a Jeep on CJ3B.info. 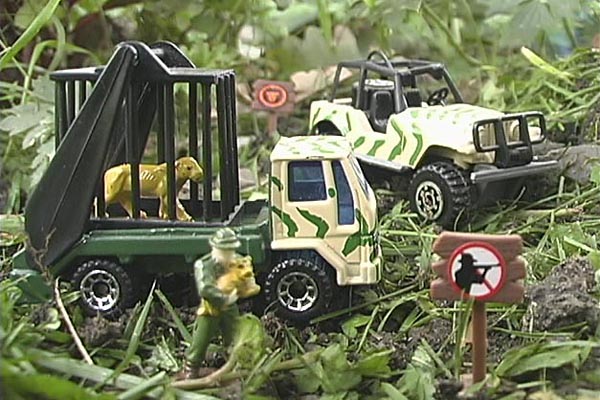 One of the great little 1/64 scale Matchbox Action System sets from 1998 was the "Safari Pack" which included two vehicles, plus two signs, a figure holding a lion cub, and a female and male (not shown) lion. See also the front of the Safari Pack bubble-pack card (70K JPEG), a nice illustration showing the lion family with what looks like a zebra-striped Cherokee in the background. 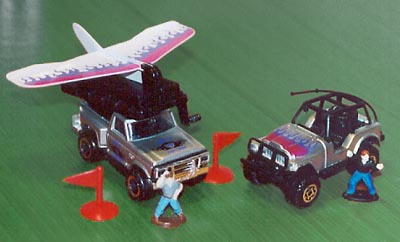 The Action System "Hang Glider Pack" was apparently planned to include the Matchbox flat-fender Jeep (see Matchbox 1998 Jeeps) but the examples I have seen came with the CJ-5 instead, as in Mike Boyink's photo here. Mike says, "I tried the hang glider since the package said it 'Really Flies!'   Yeah. Like Buzz Lightyear, it 'falls with style.'"

An earlier Matchbox glider set was the Gliding Club (16K JPEG) with a flatfender pulling the glider on a trailer. 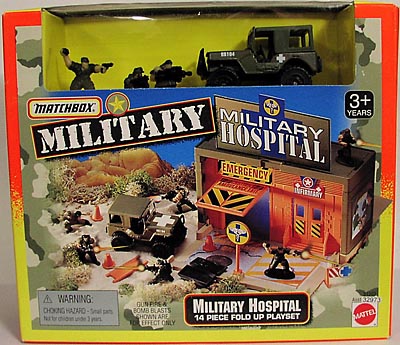 Although Matchbox issued a M*A*S*H Jeep (40K JPEG) in its "Star Car" series, its 1997/98 Military Hospital playset did not use the "M*A*S*H" name, and the included flatfender wore a white cross on the hood and sides. Apparently M*A*S*H was not the only trademark that Matchbox didn't licence; red crosses are conspicuously absent in this set. The box carries a "32973" sticker over the part number. The packaging also notes: "Gunfire and bomb blasts shown are for effect only."

Matchbox has since included its new Jeep Wrangler in the 1999 Black Star Ranch 5-pack (20K JPEG) with horse and trailer, and the deluxe Launchers Base 2000 sea exploration set (100K JPEG). The Cherokee showed up with the 2001 Action Launcher Sea Rescue Boat (120K JPEG). 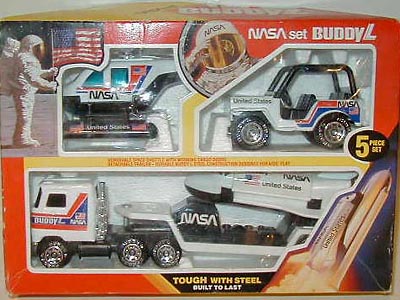 The BuddyL company started making toy trucks in the 1930's, and their pressed-steel CJ-3B-style Jeep has been produced in many colors and combinations. This NASA set includes helicopter, space shuttle and transporter. Other BuddyL examples can be seen in Mike Albright's Collection List. See also a very nice BuddyL Jeep with canoe (60K JPEG.)

Another large plastic YJ Wrangler (50K JPEG) comes with a steel trailer with a fold-out command center and GI Joe size bunk. The Jeep is labelled only "ES Toys, Made in China."

A Lego knockoff known as the "Blockmen Military Building System" included a Jeep in its No. 3674 Command Center (90K JPEG). The Blockmen series also included No. 3772 Dune Danger (90K JPEG) with a yellow Jeep.

The "Tuff One" Hunter series (140K JPEG) from Remco consisted of trucks carrying a variety of caged beasts. Each example included a Jeep on a trailer.

A popular Made in China dollar-store set with a Jeep is the Ambulance ensemble by "Toy Galaxy". There are also police and fire versions.

The Mini-Wheels Jeep Ski Jet Action Set (60K JPEG) is a notch up in quality and accuracy of scale, with a Sea-Doo on a trailer and two SCUBA divers. It's also available as part of a larger Weekend Fun 20-piece set (35K JPEG.)

The 1974 Kenner Official Boy Scout High Adventure Set from the Steve Scout Boy Scouts Adventure line, includes a vehicle clearly intended to look like a Jeep without being a Jeep.

Elsewhere on the web, see the Vintage Toy Room for more on Johnny West, Stony Smith, Rat Patrol and other sets.