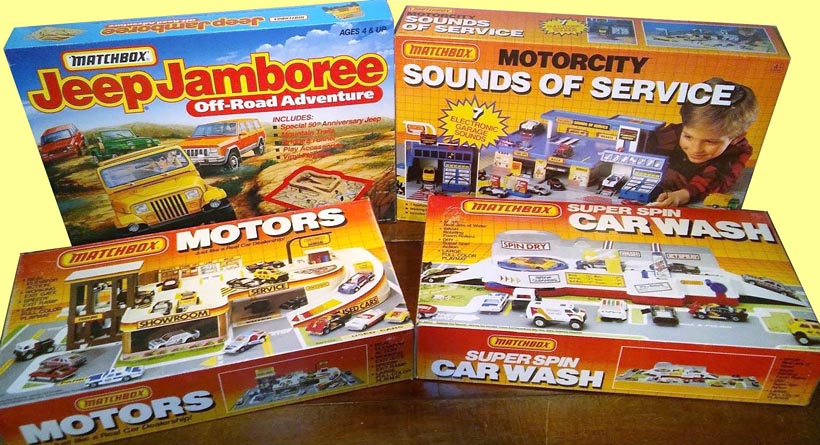 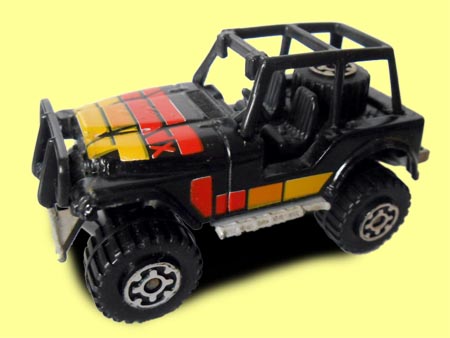 The mid 1980s was the heyday of only two Jeep toys from Matchbox -- the #5 lifted Willys flatfender, and the #37 lifted CJ-5 with the roll cage (right) which was released in 1984. It was also the heyday of the large diorama playsets, which kids would dream of as a big improvement over the carpet or sandbox, as a venue for Matchbox 1/64-scale vehicle play.

The Matchbox Cherokee came along in 1986, but not in time to be featured in illustrations on the boxes of the first playsets, which appeared circa 1985.

Below is a closer look at the top and bottom of each of the boxes. 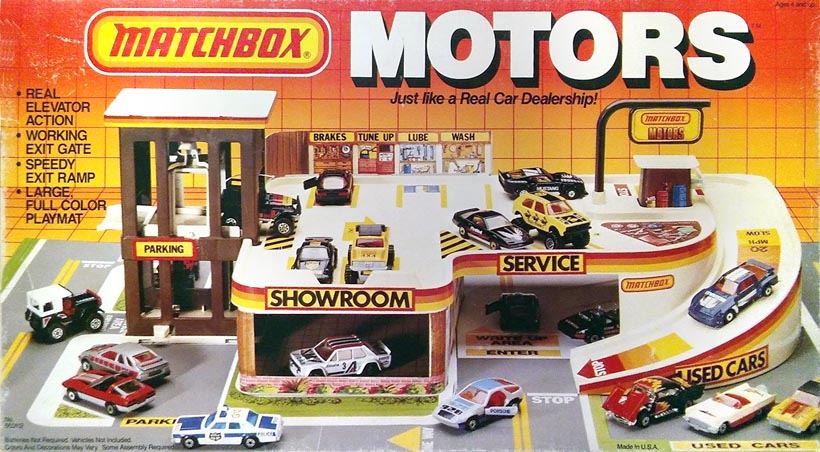 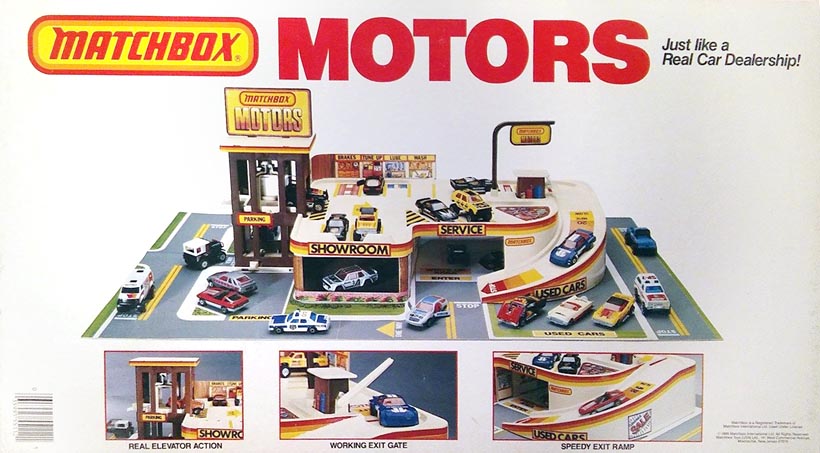 Matchbox Motors had a working car elevator to the upstairs service area. It also had an exit gate and a "speedy exit ramp" which would have been a lot more fun if it led onto the street instead of straight into the wall of the showroom.

The photo shows a black #37 CJ-5 leaving the elevator, and a black #20 (Willys with hardtop) waiting its turn.

See also the top and the bottom (180K JPEGs) of a later version of the box with a happy little boy, a red flatfender and a white CJ-5 included. And see my photo of an emergency at Matchbox Motors, on the page of Jeep Cherokee Fire Service Toys. 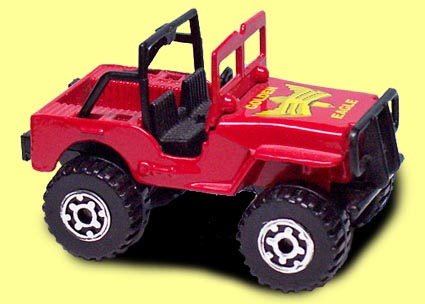 The red #5 Willys Jeep 4x4, made in Macau with details not quite as sharp as the earlier metallic brown English casting, was by far the most common Matchbox Jeep in the 80s and early 90s, reappearing year after year.

This Willys shows up, driving past the car wash in the wider view on the bottom of the "Super Spin Car Wash" box below, along with a black Willys in the parking lot. 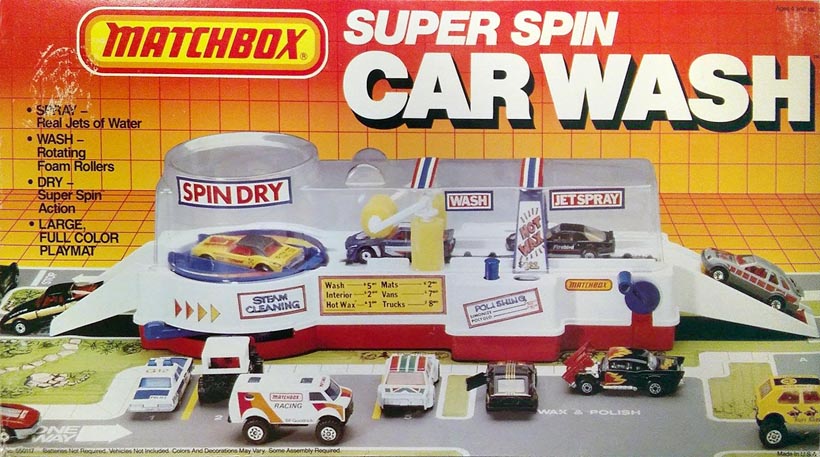 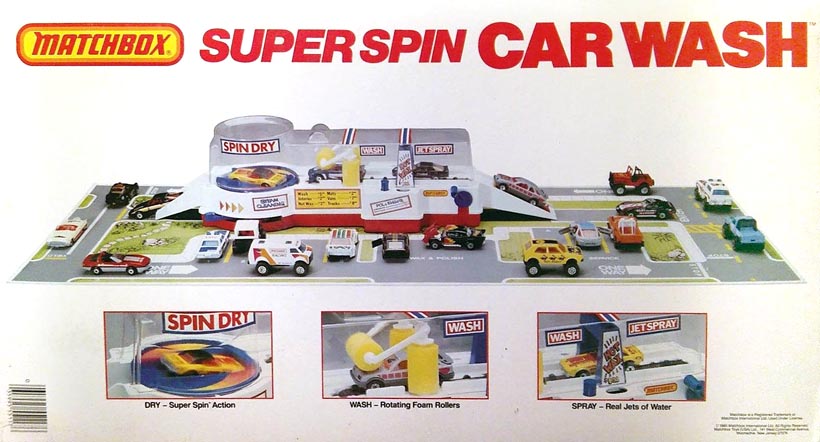 The Car Wash featured real jets of water, rotating foam rollers, and a spin dryer. This was fun for a while, but the favorite part for many kids was the plastic mat with the street layout, which I always thought should have been larger. 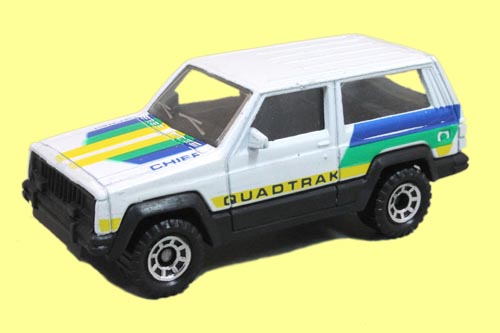 The 2-door XJ Cherokee appeared in 1986, and the version labelled "Quadtrak" was around through the end of the 80s. Not sure whether that name was at all related to AMC Jeep's "Quadra-Trac" 4-wheel drive system.

I'm also not sure why a Cherokee didn't make an appearance on the box of the early-90s "Sounds of Service" garage. There were a few Jeeps on hand though, including two red flatfenders in one photo, and a white CJ-5, which had debuted in 1987. 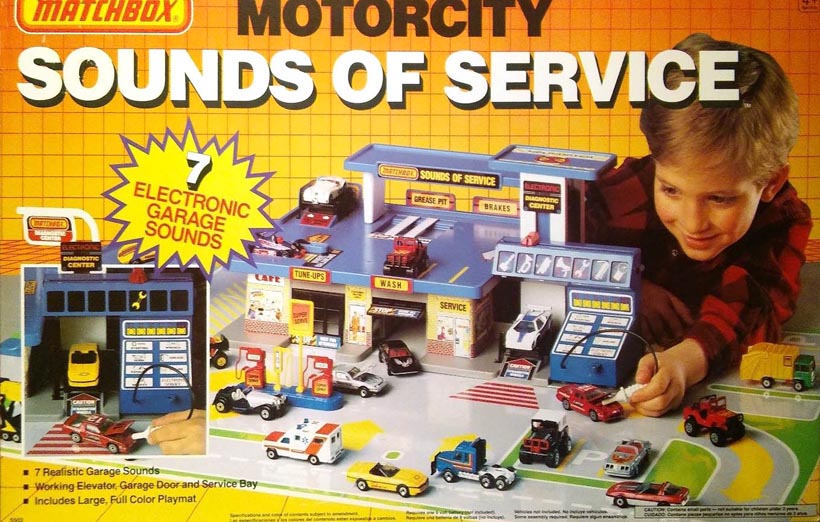 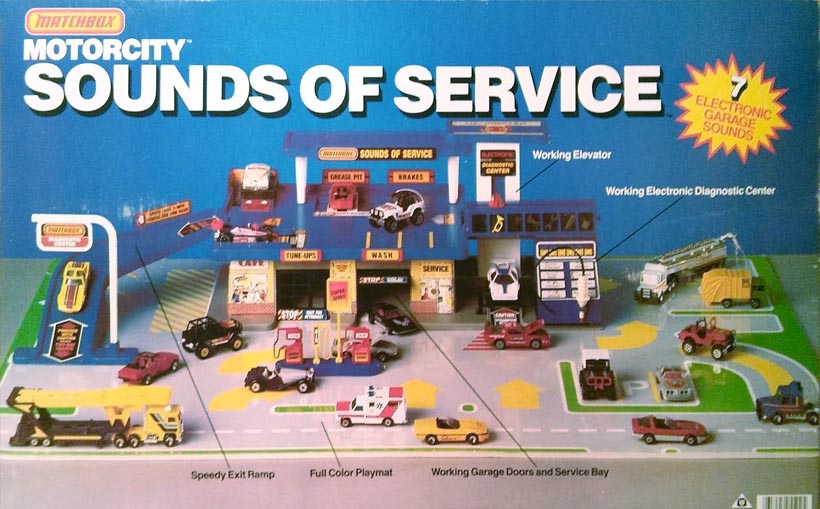 The "Sounds of Service" were seven electronic clanking and hissing and horn sounds. This playset also reprised the working elevator, but the exit ramp was replaced by the electronic module. 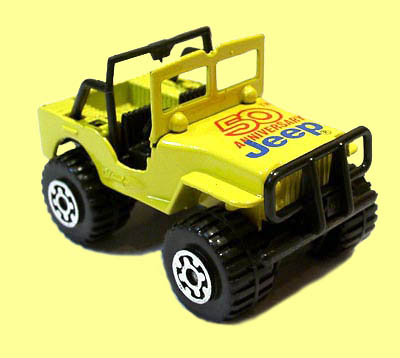 Jeep Corp. considered 1991 to be the 50th anniversary of the Jeep, and there was a special edition of the flatfender, which came with the new "Jeep Jamboree Off Road Adventure" diorama.

The yellow Jeep on the box was the current YJ Wrangler, and there were also Cherokees in the painting on the box, but surprisingly not in evidence in the play photo. 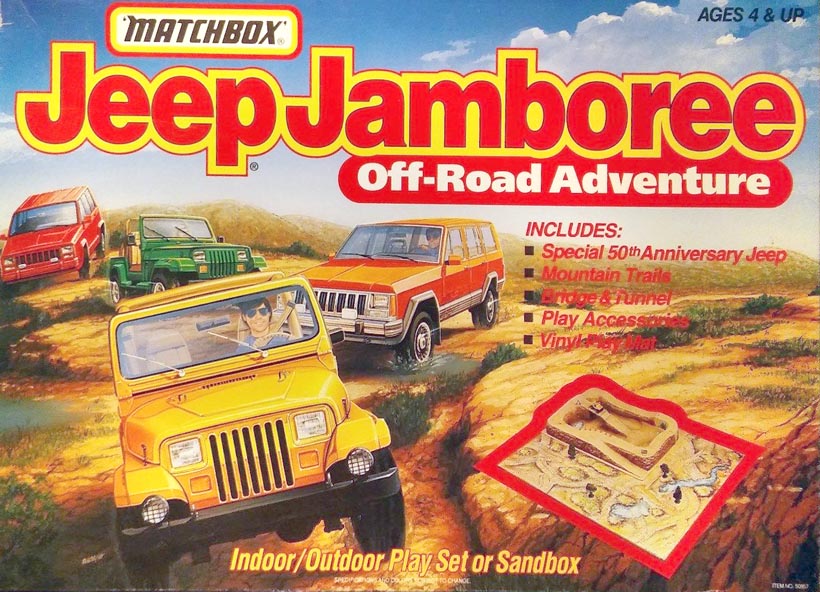 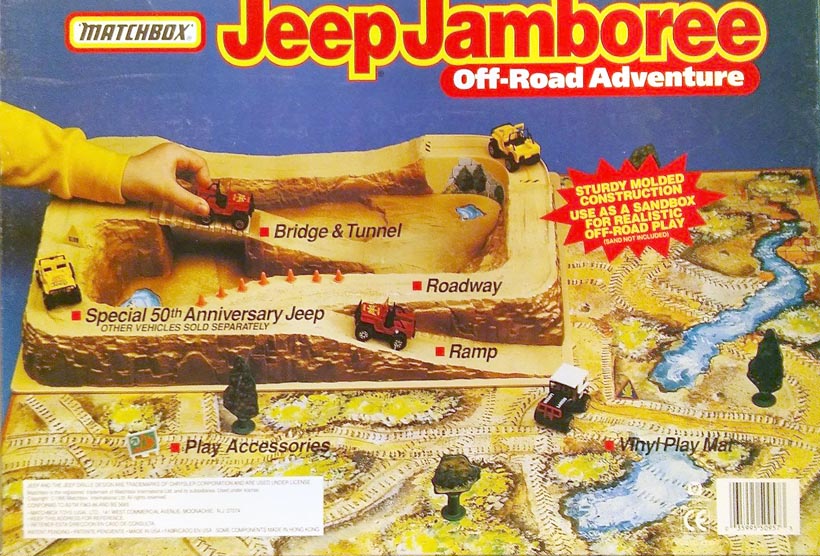 It's a good thing a special vehicle was included in the Jeep Jamboree set, because there wasn't much else to get excited about. A rectangular plastic raised roadway and a vinyl mat with a few trails that didn't go anywhere, wouldn't hold interest for very long, so Matchbox suggested putting it in your sandbox. 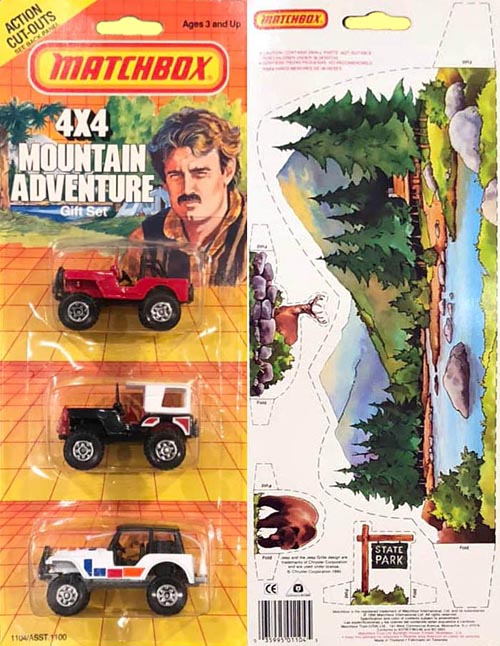 This 1990 Gift Set might just be a much better deal -- anybody know what the retail prices of the playsets were? The "4x4 Mountain Adventure" set gave you three Jeeps, and the "action cut-outs" on the back of the blister pack could be almost as good as the Jeep Jamboree play mat.

But a couple of decades later, you might be sorry you didn't get the unique 50th anniversary flatfender... 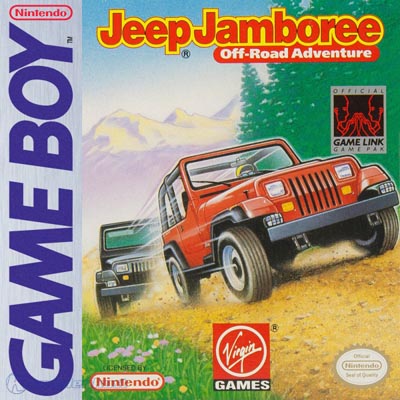 The "Game Boy" was an early Nintendo handheld video game console, released in 1989.

"Jeep Jamboree: Off Road Adventure" also appeared as a cartridge for the Game Boy in 1992. The artwork on the box had some similarities to the Matchbox playset, but the reality of the game was somewhat different -- see below. 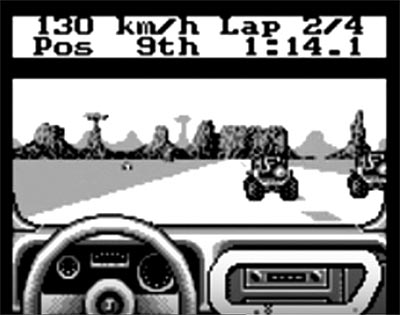 This is what appeared on the little black & white screen.

A description read: "Jeep Jamboree is a racing title viewed from your vehicle's dashboard. Though you'll drive on paved roads, the locales range from deserts to mountains to forests. Each track is filled with a variety of obstacles in addition to various twists and turns. Swerve to avoid construction signs, boulders, trees, and even abandoned vehicles. Race against an adjustable computer AI or challenge a friend via Game Link Cable."

I guess this seemed pretty hi-tech at the time.


I hope you enjoyed this little throwback to the 1980s and 90s. -- Derek Redmond

Return to the Toy Jeeps Pages for more Matchbox Jeeps on CJ3B.info.