Smokey Bear in a Jeep 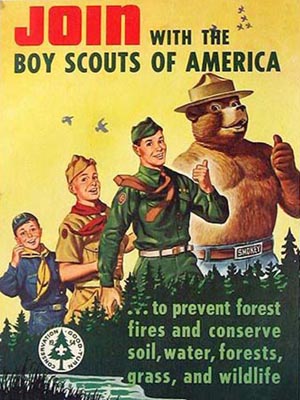 Smokey Bear is one of the most recognizable advertising mascots in the world. His forest fire prevention campaign is the longest running public service campaign in United States history. Created in 1944, it remained unchanged until 2001, when the message was updated to address other types of wildfires: "Only You Can Prevent Wildfires." 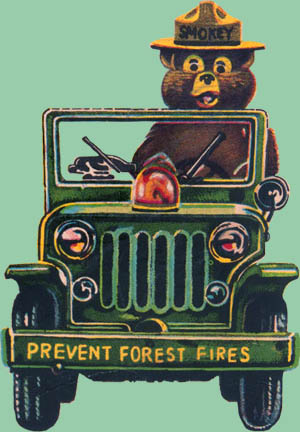 There have been many Smokey Bear toys licensed by the U.S. Department of Agriculture's Forest Service over the decades, to help spread Smokey's message to children. A few of the toys have featured Jeeps, including an extensive range of vehicles and figures produced by Tonka Toys in the 1970's (see below.)

But this illustration comes from the box of what was perhaps the first; a tinplate (stamped, lithographed sheet metal) toy from Japan in the late 1950s. It looks here like a high-hood CJ-3B, but alas that does not entirely reflect what is actually inside the box: 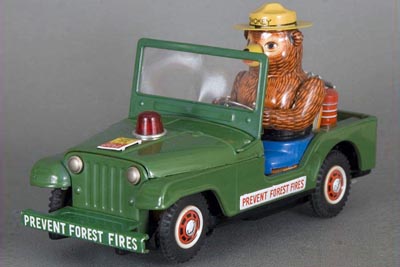 The 10.5-inch-long forest ranger Jeep is a CJ-5, and is one of many tinplate Jeeps produced by "TN" or Toys Nomura in Japan between the 1940's and 1970's (see also Fire Service CJ-3B Toys.) The exact date of this toy is unknown.

The Jeep has a battery-powered light and siren (actually more of a beeper.) The green paint approximates the dark green used on U.S. Forest Service vehicles until the late 1950s (see a 1955 color photo in On the Fireline on CJ3B.info.) 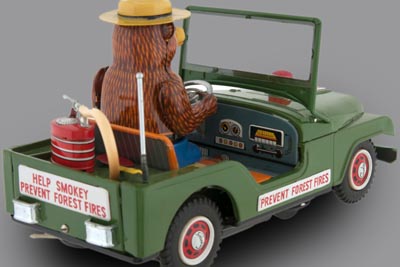 A two-way radio is lithographed on the dashboard, and "Smokey" on the hubcaps. Smokey's ever-present shovel and a fairly accurate "Indian" backpack water pump are in the rear.

A backpack pump is only occasionally seen in illustrations of Smokey; he spends most of his time doing fire prevention rather than firefighting. 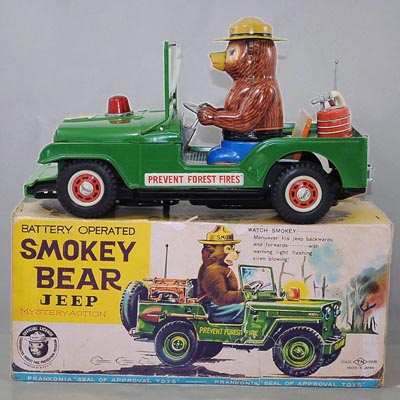 In this toy, Smokey himself is only modelled from the knees up, because of the batteries and electric motor under the floor. The battery compartment (two D-cells) and "mystery action" rotating wheels are visible under the toy (45K JPEG).

As well as the "TN" trademark, the box carries a license from the "Cooperative Forest Fire Prevention Program", which is the official name of Smokey's campaign. Also a "Seal of Approval" from Frankonia, the U.S. company which imported the toy from Japan.

Fifty years later, and complete with box, this toy can sell for several hundred dollars. 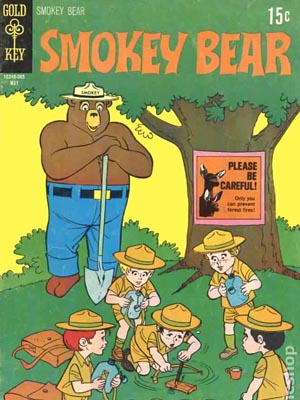 Although Smokey did coooperate with the Boy Scouts, his official helpers were "Junior Forest Rangers," as seen on the cover of this 1970 comic book. (1) By 1955, some 500,000 children were enrolled, and Smokey continued to receive so much mail that in 1965 he was given his own ZIP code. (Smokey Bear and the President of the United States are the only two individuals with their own ZIP codes.) Although SmokeyBear.com now emphasizes using social media, you can still write to him at 20252. 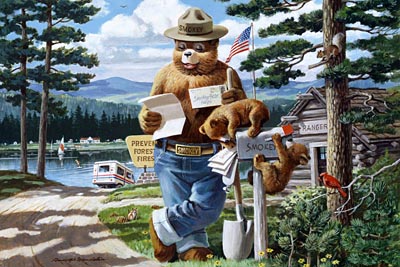 Much of the image we now have of Smokey Bear comes from hundreds of paintings by Rudy Wendelin, who became a full-time artist for the Forest Service's campaign in 1944. (See Rudy at his desk, circa 1960, 240K JPEG.) (2) Many of these paintings were originally done for Smokey Bear calendars, and are now in a Special Collection at the USDA National Agricultural Library.

This painting "Dear Smokey" shows Smokey reading his fan mail; in the large copy (230K JPEG) you can clearly see the Postal Jeep driving away in the background. (3) 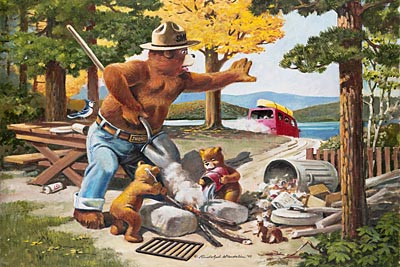 The 1995 painting "Hey, Come Back!" illustrates Smokey's emphasis on making sure campfires are completely out before leaving them, as well as keeping the environment clean and green. (4)

I wonder if maybe Rudy Wendelin decided to show the careless campers driving away in a pink van because of the pink van in the Smokey Bear Camping Set from Tonka (see below.) 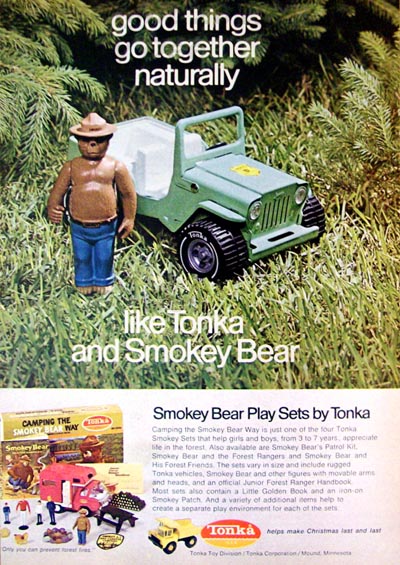 The Jeep is the 6-inch-long Mini-Tonka version, which had joined the Tonka lineup of steel toys in 1965. It's painted in the new, lighter Forest Service Green, chosen by the USFS in 1956 to make vehicles more visible in the woods. (5) (See a USFS fire engine (220K JPEG) photographed in 1990 with the sign advertising "Birthplace of Smokey Bear" at Lincoln National Forest.) (6)

The ad also shows "Camping the Smokey Bear Way" as an example of the four playsets it was introducing. It includes plastic figures of a family of four, with their pink camper van. 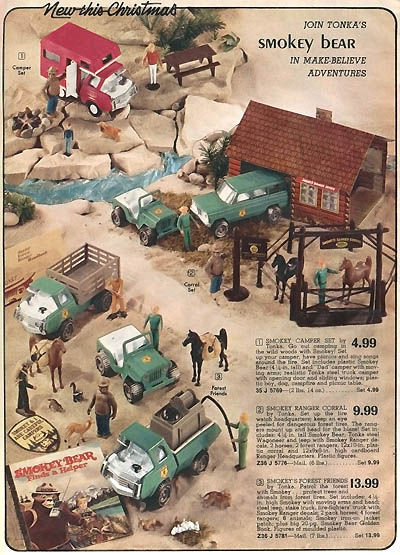 Here is the lineup as shown in the 1972 Spiegel mail-order Christmas catalogue (courtesy WishbookWeb.com) and it's well worth looking at the large copy of the picture (280K JPEG). This kind of diorama was a big part of what made toy soldiers and vehicles so appealing in those old Christmas catalogues.

The largest "Forest Friends" set included three vehicles as well as plastic people and animal figures. The trucks had the futuristic "Super Thrust" cab which Tonka began introducing in 1969. The fire truck could pump water through the hose when you pushed a rubber bulb with your finger (which may have led to some playing with matches, in order to extinguish them.) It was also available as a red Fire Pumper (30K JPEG).

As shown here in the Spiegel catalogue, the open Jeep also came as part of the "Ranger Corral" set, along with a Mini-Tonka Jeep Wagoneer. The "Camper" set was somewhat abbreviated, with only the Dad, the little boy and his dog travelling in the pink camper. A plastic Smokey figure was included in all the sets. 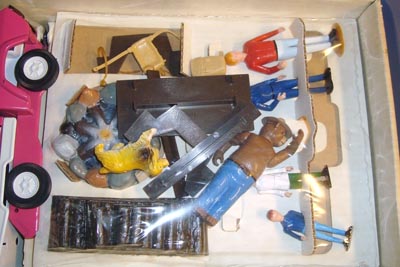 "Camping the Smokey Bear Way" as shown in the 1972 Tonka "Look Book" catalogue (90K JPEG) and in this photo of the opened box, included the whole family of four, plus dog, backpack, picnic table, campfire and firewood. Smokey was designed with a swivelling head to watch out for forest fires. His arms and hands seem designed to hold his shovel, but there was no shovel included. 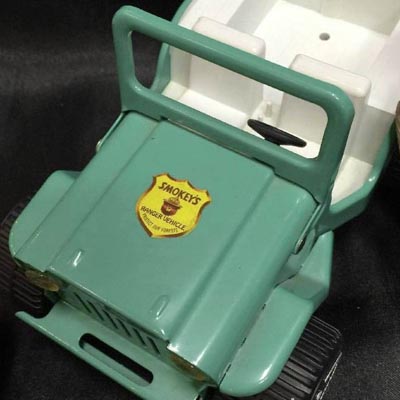 The Jeep had no special features other than the USFS green paint and a Smokey decal on the hood, and Smokey's rigid plastic body didn't fit into the Jeep.

If you just wanted Smokey and the Jeep, without a lot of other little figures, there was the Smokey Bear Patrol Kit (90K JPEG).

In photos it can be hard to tell the 6-inch Mini-Tonka from the original 10-inch Tonka Jeep; even the wide tires appeared on 1970's versions of the larger Jeeps. But one detail will always identify the Mini-Tonka; it has only six grille slots instead of the correct seven. 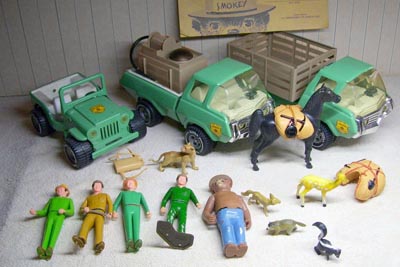 The stakebed truck in the Forest Friends set seems to be intended primarily as a place to put the little animals, which no doubt led to many hours of Hatari!-style play.

I have seen a variation of this set offered for auction as a Pickup & Horse Trailer set (150K JPEG) but I don't think this was an original Smokey Bear item.

A nice detail is the inclusion of the backpack water pump for one of the Forest Rangers. 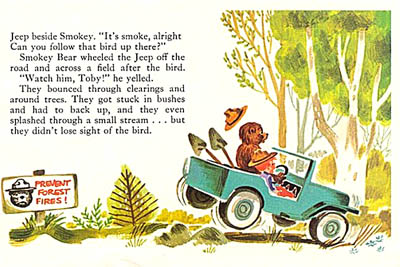 Tonka Toys even decided to make Smokey the main feature in one of its two 1973 Look Books. In the story "Toby and Smokey" by Jolly Roger Bradfield, little Toby Tonka has a dream about driving through the forest in a Jeep with Smokey, to find a fire and put it out with their two shovels. 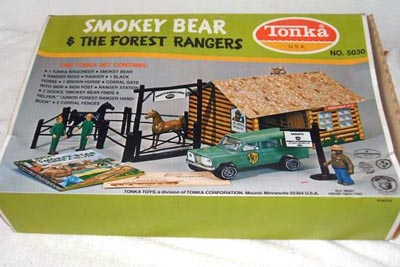 Horses have always been an important method of transportation for USFS rangers, in areas inaccesible even to Jeeps. The "Forest Rangers" set was devoted to those horses, and a cardboard headquarters building. The Universal Jeep included in the Spiegel catalogue version is not part of this standard Tonka set. 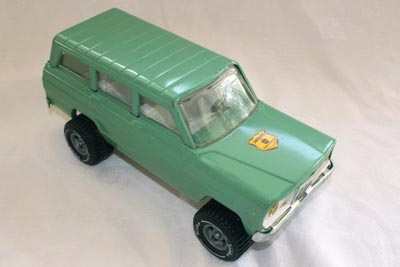 The Wagoneer included is the early, 1963-70 Kaiser Jeep version. Examples I have seen from the set have the decal on the hood, rather than on the doors as shown in the packaging and advertising photos. 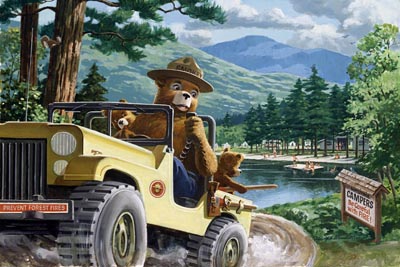 Smokey drives a yellow Jeep in Rudy Wendelin's 1980 painting "Ten-Four, Green and Clear." (8) Happy swimmers in the green and clear lake wave to Smokey as he calls in a radio report. A detail that can be seen better in the large copy (220K JPEG) is the Pulaski tool mounted on the Jeep. This popular woodland firefighting tool combines an axe and an adze on one head, and was designed by ranger Ed Pulaski in 1911. (9)

As of 2015, the image of the yellow Jeep is still being used at SmokeyBear.com to introduce "Smokey's Journey," a gallery of memorabilia. 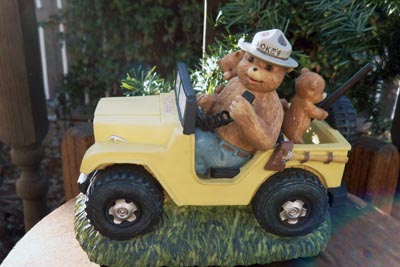 This 1996 Lefton ceramic music box is remarkably similar to the painting. Indeed, the model is labelled on the bottom as being "from original artwork by Rudolf Wendelin." The music box plays Take Me Home, Country Roads, and is 4x6 inches in size -- see also the box (70K JPEG).

But why did Rudy Wendelin decide to put Smokey in a yellow Jeep in the painting, instead of Forest Service green? 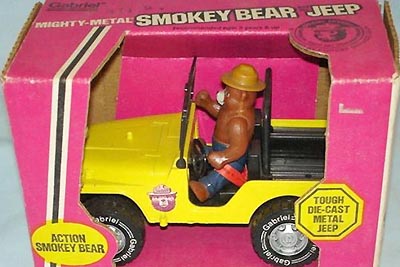 Well, I think he had seen this CJ-5, produced by Hubley in Pennsylvania and issued under the brand name Gabriel Industries, the New York company who owned Hubley in the 1970's. Maybe Rudy had this 7-inch steel toy on his cluttered desk. Where else would he have come up with the square black grille seen in the painting, identical to the front of the toy (60K JPEG).

And why did Hubley choose yellow? Probably they just wanted to differentiate their product from the Tonka Jeeps. 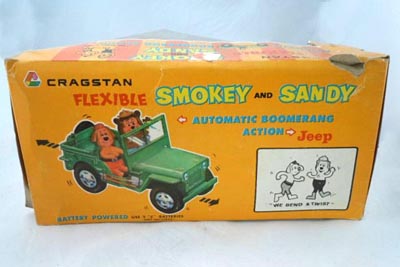 You can understand why the Cooperative Forest Fire Prevention Program would want to require that Smokey Bear products meet certain specifications and be licensed, when you see something like this tinplate toy. The "Flexible Smokey" is clearly supposed to resemble Smokey Bear. Not sure who Sandy is supposed to resemble -- maybe Little Orphan Annie's dog -- or why they would be together in a Jeep. 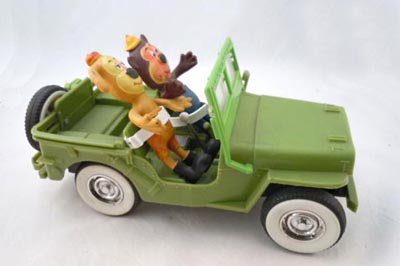 The toy is about 11 inches long. It was imported from Hong Kong by Cragstan, which was a New York company specializing in importing battery-operated and mechanical toys produced by Hong Kong and Japanese companies, including Nomura. The exact date of this toy is unknown.

I would be interested in any further information about Smokey and Jeeps. -- Derek Redmond