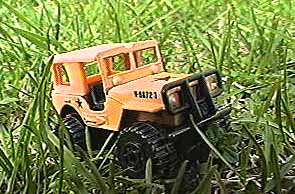 Two recent Universal Jeeps in the Matchbox Toys line are new military versions of the Willys MB that Matchbox has been selling for 30 years. One, in "Desert Storm" paint, may become a bit of a collector's item, because so far at least, it's available only as part of a 15-pack gift set. I grabbed this photo in the jungle rather than the desert.

The 15-vehicle Matchbox "Gift Pack" has five models not being sold individually, including the Jeep, a missile transporter, and an Abrams tank, all in tan with black markings. 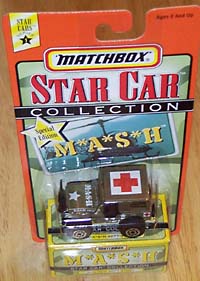 The Matchbox flatfender has also been repackaged as a "Star Car" with the "M*A*S*H 4077" theme. This release of the model has a more detailed paint job: the headlamps, turn signals, and shovels are all painted. It is also unusual to see markings on the plastic soft top. In order to "return to its roots", the model comes with a box reminiscent of the early Matchbox packaging. See a larger photo (40K JPEG).

Matchbox has been selling this casting since 1971, when it appeared in hot pink as "Jeep Hot Rod", Number 2 in the Matchbox Superfast series. It has also been recently offered by Matchbox as (strangely enough) "Jeep Wrangler", in dark blue with yellow roll bar, brush guard and graphics. 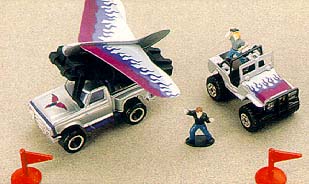 Two current "Matchbox Action System" packs include a CJ-5 model (#37) that I have seen dated as early as 1983.

This photograph (from the mini-catalogue on the back of a bubble-pack card) suggests that Matchbox planned to use the MB model as part of the "Hang Glider Pack". The version that I've seen for sale, however, uses the more recent CJ-5 casting (see below). Apparently at some point the CJ-5 replaced the MB as part of the package. The Hang Glider Pack also features a glider with truck-mounted launcher, and two figures. 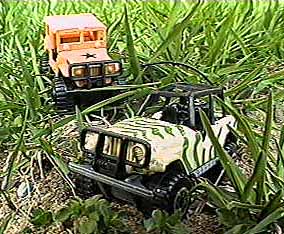 The "Safari Pack" Jeep, painted sand with green zebra stripes, is also the CJ-5, with a plastic brush guard and six-point roll cage. It has a rear bumper-mounted radio antenna, and a spare tire mounted in place of the rear seat. It's also currently offered by Matchbox in light blue paint as "Jeep 4x4".

The Safari Pack (20K JPEG) and Hang Glider Pack are two of the six "Action System" packs made up of two vehicles and a few small plastic figures and accessories, which retail for approximately the equivalent of four individual vehicles. See more photos on the Jeeps in Play Sets page.

What's unfortunate is that neither of the two Jeep castings seen above, which have formed the basis of the Matchbox Jeep offerings in recent years, is anywhere close to the accuracy and detail of the CJ-5 model which was Number 72 in the original Matchbox series, made in England by Lesney. See The Matchbox Jeep Story.

Thanks to Jarek Skonieczny for the M*A*S*H Star Car photos on this page. -- Derek Redmond