"Soldiers of the World" 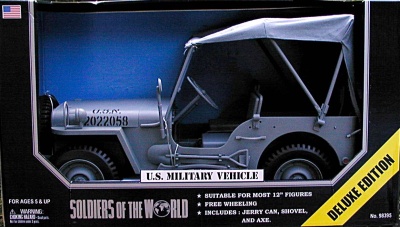 Soldiers Of The World brand Willys MB military jeep toys are 1/6-scale plastic models with very detailed moldings. They are produced in China for Formative International Co. of Hong Kong, and designed to be used with SOTW 12-inch action figures which compete with Hasbro's GI Joe series. This box is the original packaging for the SOTW Navy Shore Patrol jeep. 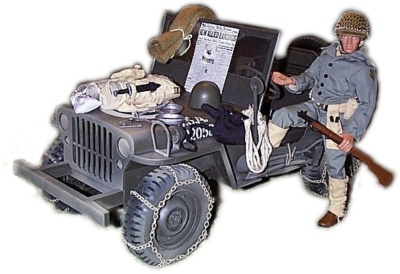 This is a SOTW 1/6-scale MB with an invasion star, posed with a GI Joe "D-Day Salute" figure. It comes with a two-piece ladder for scaling walls, a coil of rope, a full set of removable tire chains on all four wheels, a removable gas can, a removable axe and shovel, and a removable spare tire on a rim. It is painted to simulate mud on the sides and wheels; it came that way new.

The D-Day Salute Joe has all his gear which includes M1 rifle, canteen, wire cutters, ammo pouches and a cardboard newspaper. Photo by Dave Stettler. 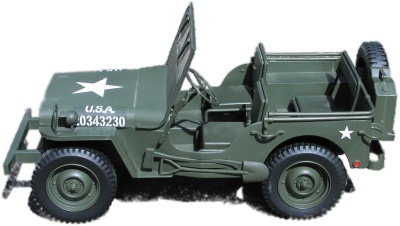 The basic WWII SOTW jeep is olive drab with a standard star decal and "U.S.A. 20343230" on the hood. Jerry can, axe, shovel and spare tire are removable. The windshield flips down and the side mirror will fold down.

A 1/6-scale diorama builder named Slainte on the Sixth Army Group website commented: "What I found interesting about this particular model is that it appears to be held together by mainly melted plastic rivets. There are not a lot of screws on this one, which makes dismantling it a challenge." 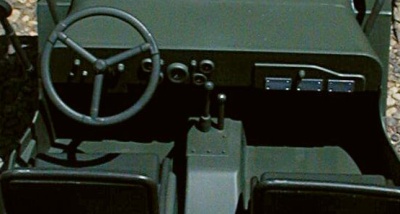 This is the detail on the dashboard of the SOTW jeep. Note the placards at the glove box area on the passenger side, and the detail of the gauges. 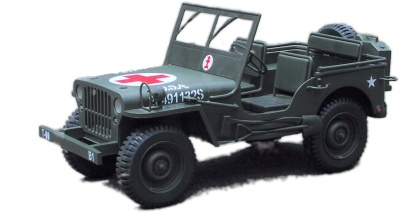 This SOTW variation is similar to the standard MB, but the number and decals are representative of a WWII medic jeep. It is olive drab with a red cross decal and "U.S.A. 20491132S" on the hood. Slainte says, "I would say the largest problem is that the decals are peel-and-stick stickers, meaning they shine when lit which doesn't have the fit and finish look of the Hasbro or the 21st Century models. The rubber tires are well made but do have some seam lines that need sanding/cutting off." 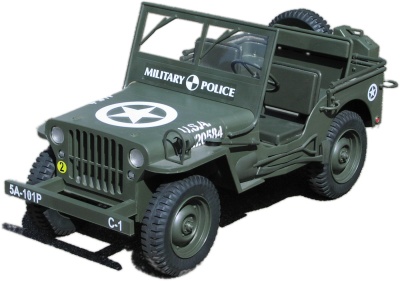 This variation is a WWII Military Police jeep. This MB is also olive drab with a star in a circle decal and "U.S.A. 20220584" on the hood, and the Military Police name and symbol on the windshield.

The crossbar behind the grille is not prototypical, and Slainte mentions other detail problems: "The front light needs modification to be passable as real, as do many parts on this vehicle. The hood does not open and it lacks detail such as the latching mechanism, and the spare tires are prone to snapping off if you are not careful. The rear gas can holder is far too large." 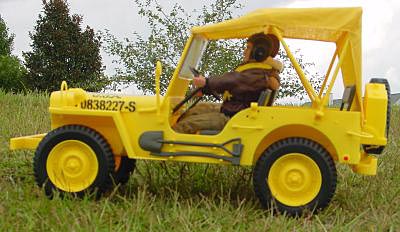 A removable soft top is included with the yellow "Follow Me" airfield jeep. Photo courtesy of the 42 Ford GPW website. 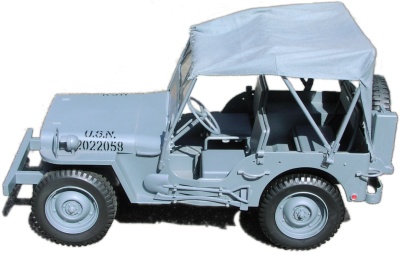 Another variation including a soft top is the WWII U.S. Navy Shore Patrol jeep. The jeep is navy shore blue with Shore Patrol on the windshield and "U.S.N. 02022058" on the hood. 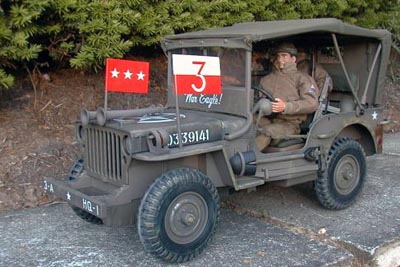 21st Century Toys is known for a wide variety of action figures and accessories in different scales, including the 1:6 "Ultimate Soldier," who of course also needed a jeep. The 21st Century "MB Officer's Vehicle" version seen here was issued in 2002 with a driver and Captain. Details include flags, air horns, radio and more. Ultimate Soldier also made a 3-star General figure to go with the vehicle, which sold originally for US$99.99. Thanks to The Beachhead for this photo.


Slainte comments, "The seats are a real beauty, with the cloth coverings and the reclined position of the driver seat making it easy to fit that figure in. 21st Century has done what I consider to be a good job of attaching the tools and the spare gas can, etc. to the vehicle in such a manner that the vehicle looks good right out of the box, or can be made to look stellar with some simple modifications. The hood opens to reveal a fairly well detailed engine bay. This function is only seen on the 21st Century jeep from what I have seen." 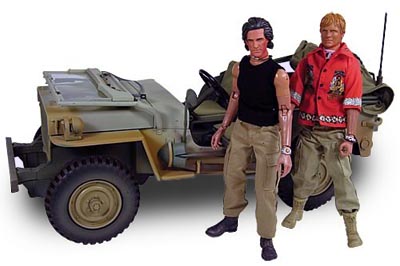 21st Century Toys also made use of its jeep in a licencing deal with Paramount Pictures to produce toys based on the 2005 movie Sahara. Advertising copy read, "Get your very own Willy's Jeep, with opening doors and free-rolling wheels, alongside two 12-inch action figures. Dirk Pitt (Matthew McConaughey) and Al Gordino (Steve Zahn) are included to drive this mighty vehicle." 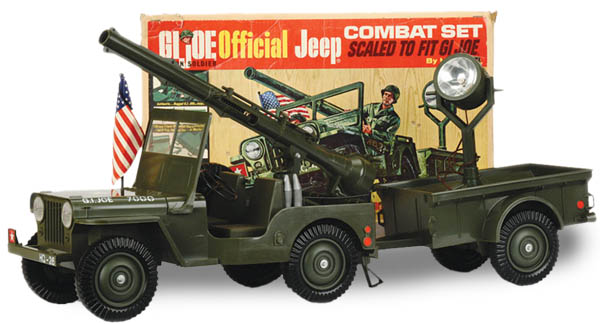 The GI Joe action figure was introduced by Hasbro Toys in 1964, and became a surprise hit. They brought out a 1/6-scale Jeep to go with GI Joe the following year, and this original less detailed vehicle was based on the Willys M38. It pulled a Bantam trailer with a searchlight powered by two D batteries under the hood of the Jeep. 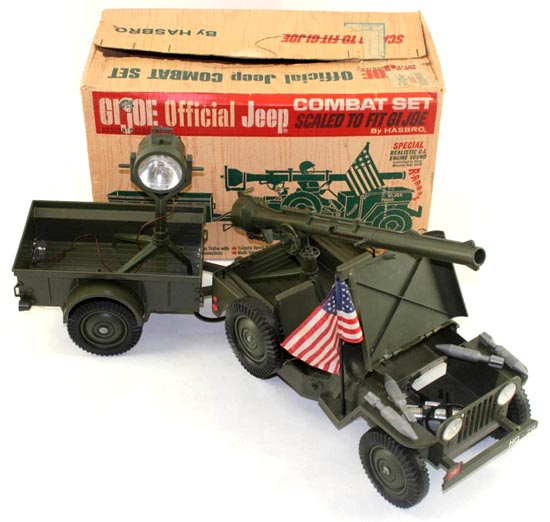 Mounted in the back of the Jeep was a recoilless rifle that fired four plastic shells, although some later versions were non-functional. The spare tire was mounted in the correct location for an M38 with the 106mm anti-tank weapon. See more details on the web at Vintage 3D Joes. 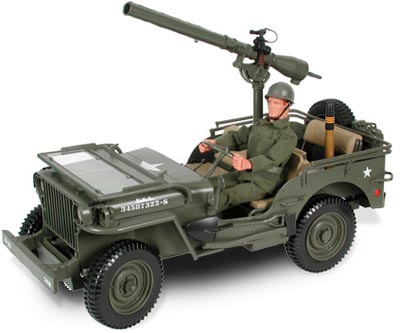 The Hasbro jeep was reborn with more detail as a Willys MB, for the new GI Joe of the 1990's. The version carrying the recoilless rifle was still popular, and the 106mm gun still fired a shell, but its scale was more accurate.

The Hasbro front grille is based on the early "slat-grille" Willys MB. The hood has molded latches, but like the SOTW model the hood does not open. 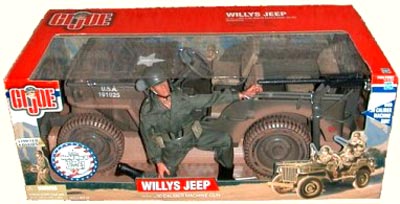 Some versions came with dirt painted on the wheels and fenders. Diorama builder Slainte's opinion is that "out of the box" this jeep "is the most believable with the least amount of work. Getting the muddied one is a must as Hasbro has done a good job of weathering it and giving it that 'been there' look. The front grille with the turning tires (60K JPEG) is something that adds that extra bit to a diorama. The dash is one of the things that blew me away; the detail used in the decals and the gauge bezels is phenomenal." 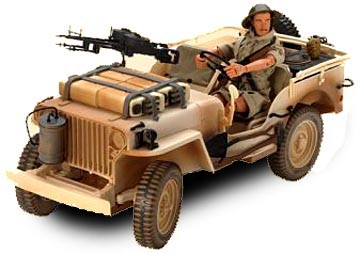 The desert patrol jeep based on the Special Air Services configuration was sold with a British driver for a 2002 price of US$59.99. Some modellers are unhappy that the weathered color is molded into the plastic of this version.

Perhaps because of the large number sold over the years, used examples of the Hasbro jeep usually command a lower price than those from the other two manufacturers.

One collector on the Sixth Army Group website summarized: "The 3 jeeps have been measured and remeasured. For what it is worth, the 21st Century is damn near perfectly to scale, SOTW is next closest and Hasbro's is less so. While the 21st Century jeep is more to scale and has nice details (upholstery, engine, etc.), the (weathered) Hasbro jeep just looks damn nice. The functional steering and the price may make the Hasbro jeep the best value."

Thanks to Dave Stettler for the photo of GI Joe with the SOTW jeep, Robert Notman for the "Follow Me" photo, and Mark Wright for the "Officer's Jeep" picture. And thanks to Mike for his text and photos. -- Derek Redmond

Also on CJ3B.info, see a GI Joe Brushfire Jeep and a Jeep Fire Engine in 1:6 Scale.

Last updated 9 May 2009 by Derek Redmond redmond@cj3b.info
https://cj3b.info/Toys/SOTWToys.html
All content not credited and previously copyright, is copyright Derek Redmond