I received my Dad's Jeep a short time after his passing in the spring of 2000. When I received it, the odometer read 17,313 actual miles. The Jeep is a one-owner; Dad purchased it new in the spring of 1955. See the original key above, and the front and back (60K JPEGs) of the original keychain from Willys dealer Roy Bridges in Birmingham, Alabama. The black & white photo below shows Dad later that year, with the Jeep before the addition of the first soft top. The photo on the right shows Dad and my brother looking the engine over in 1959, and on the left is my oldest daughter in 1959, sitting on the hood after a ride around the block. 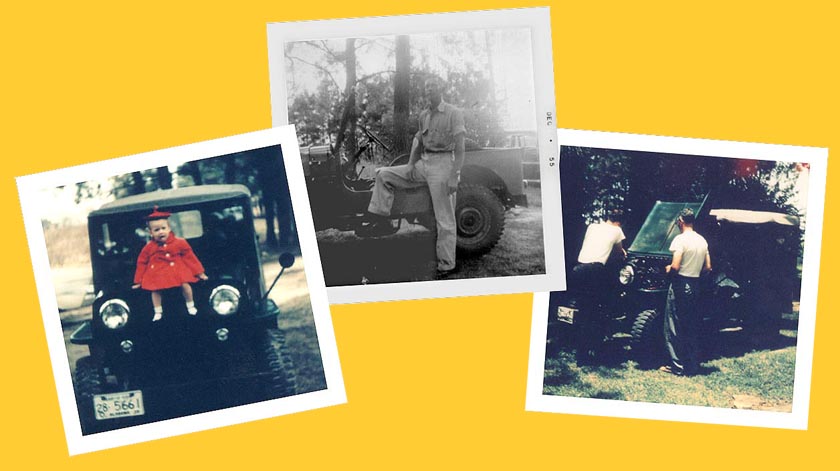 I was 20 years old and in the Air Force when the Jeep was purchased. While on leave I did a little farm work with the Jeep. (We raised broiler chickens, but Dad was not a true farmer -- he was a Service Supervisor with a Rural Power Company.) Most of my time was spent riding around in the Jeep dating a little girl who was later to become my wife, and we did a small amount of trail riding, like going to the woods to gather Christmas Trees.

Note from Derek: I was very sad to learn that Lawrence's wife Ora Lee passed away on Sunday, 15 December 2019. The many photos on this website of the two of them riding in the CJ-3B, are a testimony to the wonderful six decades during which they did that. She was a great part of the family tradition, and she will be very much missed. -- Derek Redmond 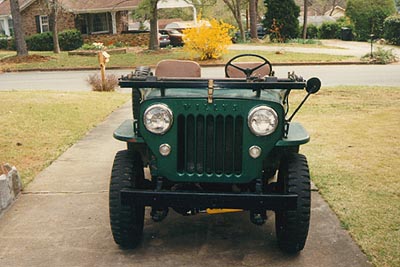 The vehicle has been garage kept since 1963. Prior to that it sat in the weather. With the exception of batteries, a muffler and a tailpipe, no other parts have been replaced. Dad did have the seats recovered, I think in the mid-80's. The original color of the seats was the same as the grey covers on the tailgate chains. The only other change Dad made was to add a stabilizer shock to the front tie rod ends to eliminate shimmy, and to bolt on a farm tractor floodlight to the draw bar for a back up light. I also have the original owner's manual that came with the vehicle. 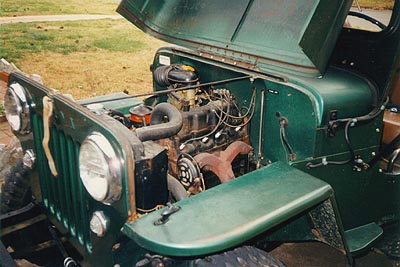 The body is also in very good condition, not a spot of rust, with only a very minor ding or two. But the paint on the fenders and the hood is in poor condition -- this is probably due to the fact the Jeep was used on the farm. I think the ammonia in the chicken droppings being in contact with the body of the Jeep caused the paint to fade and peel over the years. 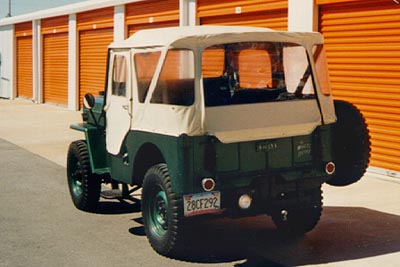 The Jeep has had three tops. The first was a full soft top like the old military style. I do have the old original door frames -- the metal is in very good condition but the fabric is severely worn. This top lasted quite a few years. When it wore away, the next top was a piece of canvas. Next I installed this white Best Top around 1985. 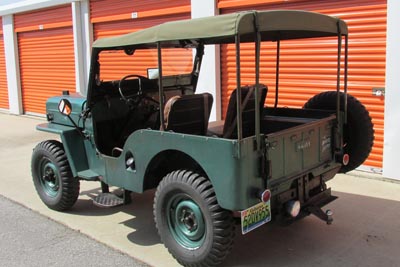 In the spring and summer I would constantly remove and replace the white Bestop depending upon the weather. I liked the open Jeep but did not like the rain so I invested in a Beachwood Summer Full Cab Bikini Tonneau Top in April 2015. I install the white Bestop doors when the weather is a little inclement. 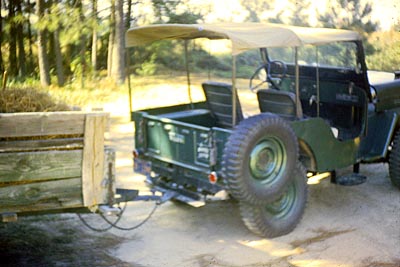 The Beachwood top is similar to the old homemade canvas top, seen here in the mid-1960s. A piece of 1/4-inch rope was threaded through a seam on one end of the canvas fabric and this was placed in the groove in the windshield and the rope was tied on each side of the windshield. The other end of the canvas fabric was tied to the original bows at the back. 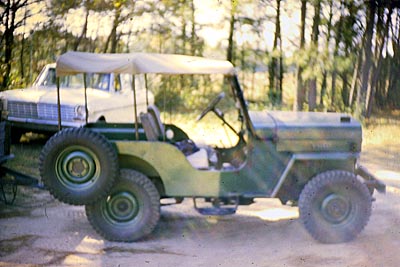 Yes, that is my 1964 Chevy Nova. I spent a day with Dad doing the spring cleanup at his home. We moved loads of pine straw, limbs from pruning and other things from the previous winter. 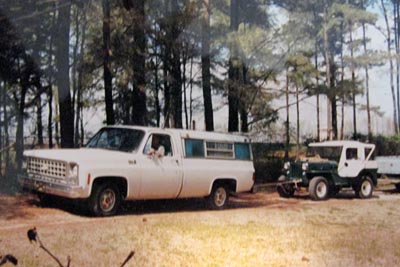 In 1981 a set of white replacement wheels with larger tires was purchased, and placed on the Jeep for ten years. The larger tires did not sink into soft soil as did the original 700x15 tires. But the original wheels and tires (old military style tread) were removed from storage and re-installed on the Jeep in 1991. This is one reason they are in such good condition.

I call this picture "sure there is enough gas in the tank to make the trip."

I retired in 1991 from Bell South and am having a blast. We enjoy taking the Jeep to car shows and the annual Christmas parades. Recently we travelled to Southeast Willys 2017.

Thanks to Lawrence for the photos and details of this Wade family heirloom. -- Derek Redmond

See Wade at the River for more pictures, and Jeeps and Water for a story from the old days.

Also on CJ3B.info, there are lots more close-up photos of Lawrence's Jeep in 1955 CJ-3B Details: A Photo Reference.