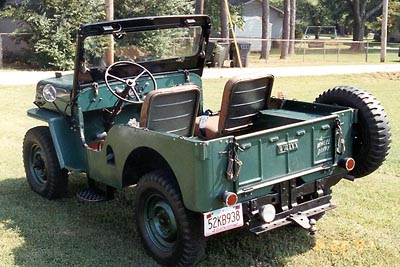 This low-mileage CJ-3B is owned by Lawrence Wade in Alabama, whose father bought it new in 1955. Lawrence says, "With the exception of batteries, a muffler and a tailpipe, no other parts have been replaced. Dad did have the seats recovered, I think in the mid-80's. The original color of the seats was the same as the grey covers on the tailgate chains. The only other change Dad made was to add a stabilizer shock (70K JPEG) to the front tie rod ends to eliminate shimmy, and to bolt on a farm tractor floodlight (70K JPEG) to the drawbar for a backup light."

Below are links to a series of detail photos (50-100K JPEGs) of Lawrence's Jeep, taken by Rus Curtis, who is restoring a 1954 CJ-3B in Kansas. Included are comments by Rus on some of his photos.

Also a page of photos taken by Lawrence of the framework for the original canvas top.

Thanks to Lawrence, and to Rus for this great set of reference photos. -- Derek Redmond

For more background and photos of this Jeep, see Family Tradition and Wade at the River.