The Belgian Congo received independence on 30 June 1960, after a very short transition period. The Force Publique was transferred to the new republic as its new army. Belgium initially retained two major military bases, which army and air force units of the Metropolitan forces continued to use for training purposes.

Within days of independence, things in the Congo went rapidly wrong very, for all sorts of political, economical, sociological and international reasons too complex to summarize easily. Dozens of books have been written on the subject. Suffice for now to say that the Force Publique mutinied, mayhem ensued, a large portion of the Belgian population left for Europe and Belgium intervened militarily. Other results of the events in July 1960 were the secession of Katanga (see Part 3) and the creation of the United Nation's ONUC organization (see Part 6). 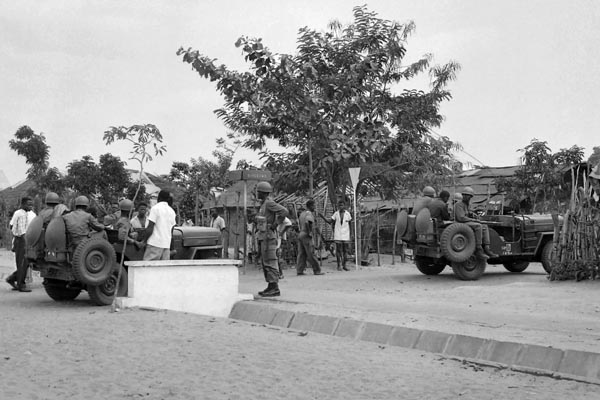 By 5 July 1960, the mutiny of the Force Publique had already started but had not yet spread to the entire army. This photo was taken on that day in the capital Leopoldville and shows some soldiers who have not yet joined the mutiny, entering a street in the native suburbs to arrest some civilian rioters. Their CJ-3Bs (both marked with 1955 delivery dates) have the usual FP modifications for reconnaissance Jeeps (see Part 1). The round items carried at the rear are riot shields for the soldiers. (Photo © TopFoto ref.IPU396445) 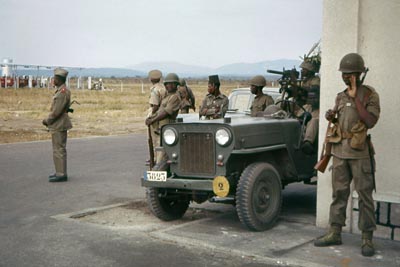 This detachment of Congolese soldiers is stationed at the N'Djili airport in the capital Leopoldville (see the Congo map), a few weeks after independence. Their CJ-3B is typical of the armed Jeeps at the time. Note the extra turn indicators on the front and the lack of a blackout light: this was still basically a civilian Jeep painted green and fitted with a .30-cal machine gun. The Belgian flag stripes on the licence plate have been over-painted in blue, to approximate the Congolese flag, but otherwise nothing has as yet changed from colonial days -- except the absence of any white officer or NCO. (Photo © Torsten Björklund) 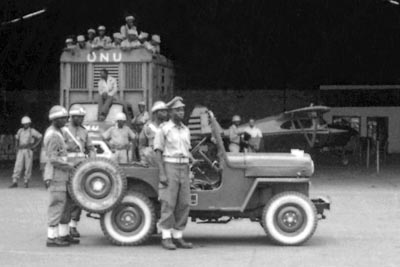 Another Jeep at the airport of Stanleyville: the second largest city in the Congo. The white Sam Browne belts show the soldiers to be military police. Guarding the hangar behind them is a detachment of Ethiopian UN soldiers, with a locally acquired truck sloppily marked "ONU" (the French abbreviation for the UN). Stanleyville soon became the seat of an alternative Congolese government (Photo © S-E Everstål/Swedish Aviation Historical Society) 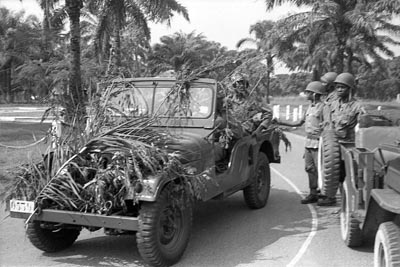 The FP were great believers in using natural camouflage, a habit these soldiers apparently had problems breaking even when operating in the capital city in July 1960. At first glance they are riding a CJ-6, but the shape of the fuel filler cap and glimpses of deep-seated headlights shows that it actually is an M170, even if used as a troop carrier rather than as an ambulance. Since the FP was not a receiver of US aid, this particular Jeep must have come by way of the Belgian Army. On the right is a standard FP CJ-3B with an empty radio rack. (Photo © Terence Spencer) 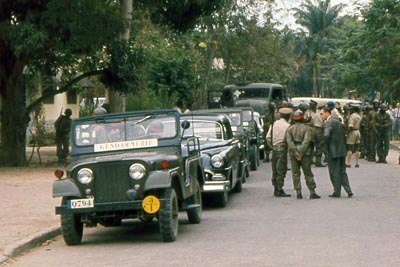 Congolese gendarmes with red helmet bands on the streets of central Leopoldville in July 1960, together with some infantrymen and bemused white inhabitants. Nearest is a normal CJ-6 (not an M170) with the large additional indicators on its fenders often seen in the Congo, as well as a siren on the front bumper. Further back in the column are two CJ-3Bs. The massive truck in the background is a late 1940s Ford C-6 COE artillery tractor, relegated to police work after the Force Publique retired its field artillery. (Photo © Torsten Björklund)

The Belgian Government decided to send in troops to protect its citizens and restore order, once it was clear that major portions of the Force Publique had gone rogue. The initial incursions came from the Belgian military bases left in the Congo after independence and additional troops were flown in from Europe. The Belgian invasion (which is technically what it was) triggered an International crisis and the Belgian military was forced to leave the Congo completely some weeks later, after the UN's ONUC organization had moved in (see Part 6). 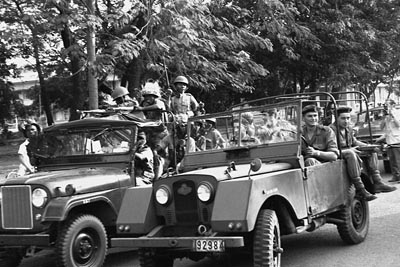 Belgian and Congolese troops meet in the streets of Leopoldville in mid July 1960, this time apparently on friendly terms. The Belgians have a Minerva TT (Belgian-made Land Rover) still with Belgian plates while the Force Publique soldiers ride an apparently brand-new CJ-6. (Photo © Terence Spencer) 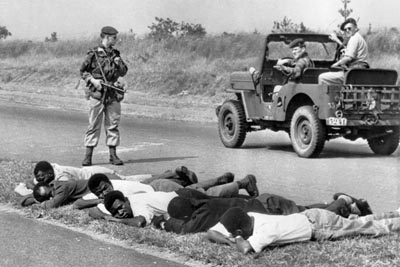 When the Belgian troops moved in to secure the major cities and towns in the Congo in July 1960, they were short of vehicles and therefore took over some Jeeps and trucks from the Force Publique. These paratroopers in their "borrowed" CJ-3B have rounded up some suspected troublemakers on the road to the N'Djili airport. 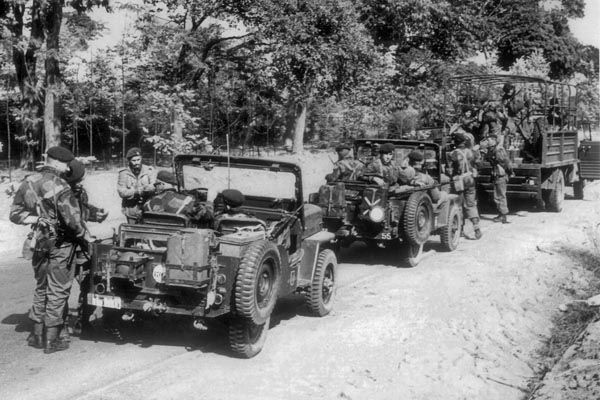 Another group of Belgian paratroopers, headed for the barracks in Jadotville in Katanga province, one of the few places where there was any serious fighting between Belgian and Congolese troops. The rear ends of their commandeered CJ-3Bs are typical of the former FP Jeeps, with two external bins sized to hold jerry cans. The extra L-shaped indicator lights can be seen above the rear lights and the military style tow hook is also visible. There are no bumperettes on these civilian-military hybrid Jeeps. (via Daniel Despas) 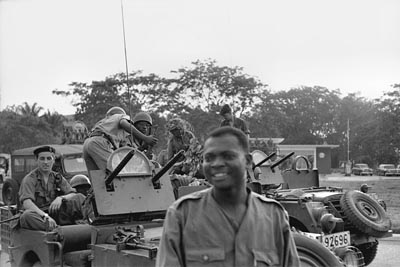 The Belgian Army had a special reconnaissance version of the Minerva TT, with some armor protection at the front. Some of these vehicles were later delivered to the Congo and when they wore out in 1965-66, the double machine gun mountings and the half-round armored glass screens were frequently salvaged to be mounted on armored M606 Jeeps instead. In this July 1960 view, the two Minervas are joined by a Congolese CJ-6, unusually with a full canvas top mounted. The Jeep also has a small radio antenna fitted on the top corner of the windshield frame. (Photo © Terence Spencer)

The Force Publique mutiny ended after a couple of weeks and the army was renamed the Armée Nationale Congolaise (the ANC). For political reasons, there was no punishment for the mutineers, however, and there was no restructuring of the ANC -- except in Katanga, where it was replaced by a new army (see Part 3). The major difference was that all Belgian officers and NCOs had been fired and replaced by Congolese soldiers promoted to officers overnight. The effectiveness of the ANC was therefore quickly reduced to virtually zero, as a completely botched attempt to invade Katanga through the Kasai province (see the Congo map) in September 1960 showed.

The situation in the Congo remained precarious the first few years after independence. An alternative government established itself in Stanleyville, the second largest city, but the two rival governments were eventually integrated in the second half of 1961. 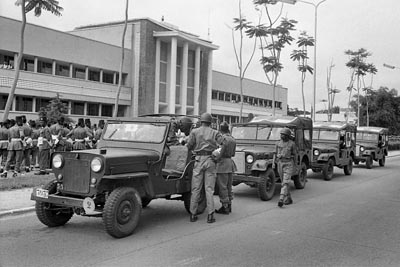 After its abortive Katanga invasion, the ANC field force was largely confined to Leopoldville and a few other population centers. The number of Jeeps was dwindling due to the secession of Katanga, vehicles destroyed during the mutiny and fighting following independence, and increasingly poor maintenance. This ANC CJ-3B still looks in good shape in November 1960, though, and is accompanied by three M170 ambulances -- a very rare Jeep version in the Congo at any time. (Photo © Terence Spencer) 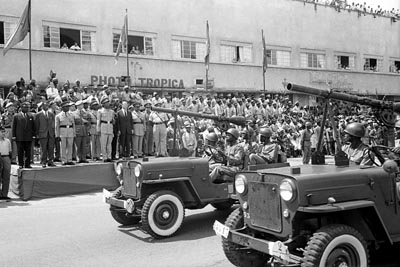 The major activity for large portions of the ANC over the next few years was parading. The spectators of this parade in Leopoldville in November 1960 include Col. Joseph Mobutu, the ANC Chief of Staff, and various UN dignitaries. The Jeeps are fitted with 75mm recoilless rifles M20, with a transport bracket securely bolted to the cowl. For variety, these 1953-delivered CJ-3Bs have their additional Congolese turn indicators fitted to the fenders rather than the front. (Photo © Terence Spencer) 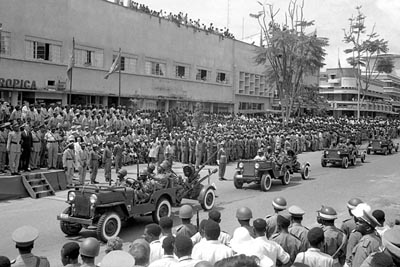 Another photo from the same parade by the same photographer shows other CJ-3Bs and a CJ-3A towing 20 mm Oerlikon GAI-B01 anti-aircraft guns. Three of the guns have a spare gun barrel strapped to their carriages. (Photo © Terence Spencer)

For the first few years of its existence, the ANC received virtually no new equipment and continued to make do with the Jeeps delivered up to 1960. There were some desultory military campaigns against Katanga in 1961-62 but with poor results. By 1962 there was an extreme shortage of vehicles and those at hand were approaching the end of their useful life. A US military mission in mid 1962 was unable to establish how many Jeeps the ANC had -- the Congolese themselves did not know -- but estimated that some 200 spare part sets were needed to keep a reasonable number of Jeeps running. 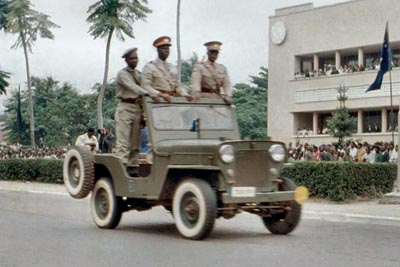 Dwindling numbers of Belgian CJ-3Bs remained in service for some years, together with a few of the older versions. They seldom took to the field and instead stayed in or near the major garrison towns. On the first anniversary of independence, on 30 June 1961, this CJ-3B was used for senior officers to parade around the capital Leopoldville. (Photo © M. Linet/www.cegesoma.be ref.143466) 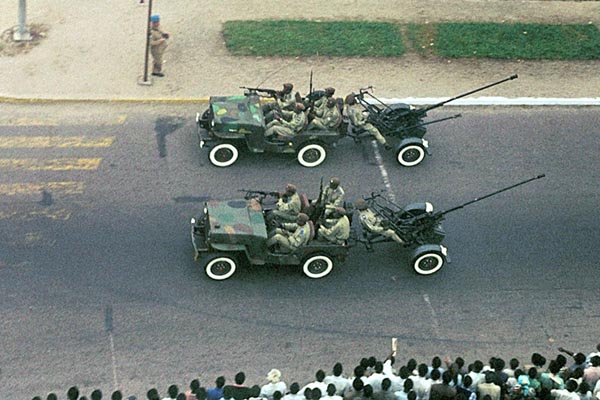 By 1963 some of the Jeeps in Leopoldville had been given an eye-catching, if rather impractical camouflage pattern with large patches in a variety of bright colours. The 20 mm Oerlikon anti-aircraft guns were still being towed around during parades but few of them ever fired a shot in anger during the many campaigns of the 1960s -- and certainly never against any aircraft. (Photo via Jean Kastergat) 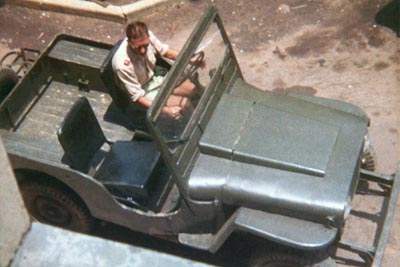 This interesting hybrid Jeep seen in Elisabethville in 1964 may be an indication of the strained vehicle situation in the ANC by this time. Although basically a CJ-3A, the raised hood section suggests that it has been fitted with the higher F-head engine from a CJ-3B. The installation is very neatly done, and arguably a better-looking solution than the normal CJ-3B hood. (Photo © Daniel Despas) 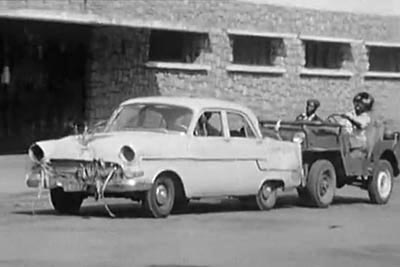 In early 1964 a new rebellion, the Simba uprising, began in eastern Congo. The ANC lost huge quantities of equipment during the first months, when whole battalions melted away at the first sign of the rebels. These Simbas in the town of Albertville, seen in a newsreel frame, have appropriated an old colonial CJ-3B of the ANC and are using it to bump start a rather dilapidated 1950s Opel Kapitän. The grass straws tied to the front were charms to provide spiritual protection. Vehicles used by the Simbas seldom lasted long, due to non-existent maintenance and poor driving skills, and many were just abandoned when they ran out of fuel.

Continue to Part 3: The Baluba Campaign, or return to the Table of Contents.

The flag seen at the top of this page, was used by the Republic of Congo (the former Belgian Congo) from 1960 to 1963.