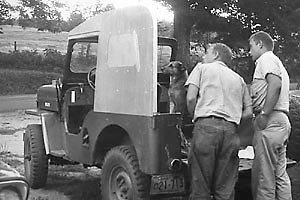 Maine, August 1959; the owners of this CJ-3B, apparently a couple of brothers, are installing a hardtop bought from Sears, Roebuck and Co., probably through the large mail-order catalogue. They're hoping for a slightly warmer experience when they use their Jeep for chores like hauling Christmas trees in from the woods during the Maine winter. This unique series of photos is from the collection of Jerry O'Neill. Click any of the photos to see large detailed copies. 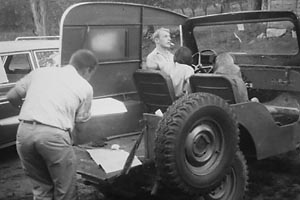 Hardtops shipped unassembled would be installed either by dealers or by the purchaser, and apparently came with complete instructions. This 1959 installation seems to be going pretty smoothly and without too much cussing, since the young daughter is sitting in the front with the dog. 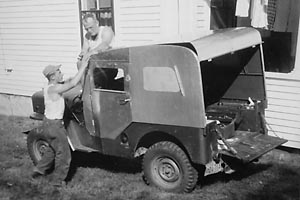 With Sears' sophisticated nationwide advertising and distribution system it is not surprising that their tops show up more than any other brand on early civilian Jeeps. Certainly their low-priced aluminum tops survive in great numbers into the 21st cerntury, while other tops like the Worman JeeCAB seem to be non-existent.

An aluminum halfcab similar to the Sears top, purchased by Mark Dulken in 2012 has a tag (80K JPEG) indicating it was a Model 8828 built by "Meyers Industries" in Tecumseh, Michigan.

Sears' relationship with Kaiser was close. In the early 1950s Sears sold its own Allstate automobile through its stores. It was a thinly-disguised "Henry J" made by Kaiser. It used the Willys flathead 4- and 6-cylinder engines, which Kaiser re-named "Supersonic". The Allstate auto was a short-lived experiment lasting only two years until 1953, but Sears continued to sell Jeep parts including engines in its stores, and through a special Sears Jeep Parts catalogue.

This page is from the 1971 catalogue (see a larger copy, 150K GIF.) The illustration of the aluminum tops clearly shows the riveted construction, although the text adds that "Spot-welded seams provide extra strength."

It's not clear who actually manufactured the tops sold by Sears, but it's quite likely that they were built by companies such as Koenig who also sold tops under their own brands.

Sears tops are good examples of the window configurations found in most hard tops by other manufacturers. The Deluxe Steel Full and Half tops (#1 and #2 in the illustration) have very large door windows but they are two-pane horizontally sliding windows. They offer good visibility but make it difficult to hand signal, and awkward to rest an arm on the sill as many drivers enjoy doing. Because of their size they cannot be cranked or lowered down as there is not enough space below the window opening for the window to slide fully down. 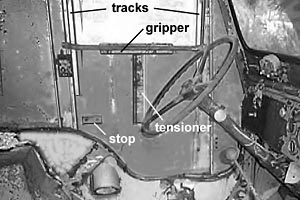 On all other models the windows open by sliding down. In order to slide down, the window must be considerably smaller both vertically and horizontally. So the Sears windows are typical of the small windows offered by most other manufacturers. They all faced the same problem and there were no easy solutions. These windows were small, awkward and uncomfortable, providing limited visibility. The best you can say about this is that it worked... most of the time. The photo by Ron Fisher shows his aluminum cab. 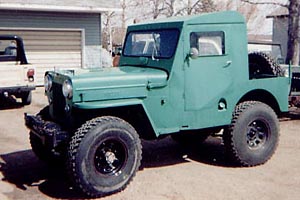 The Deluxe Steel Full and Half Tops (#1 and #2 on the catalogue page) were designed for the CJ-5, while the Standard Steel Half Top (#3) is suitable for the early CJ's including the CJ-3B. Scott Schafer's 1953 3B in Colorado has a Standard Half Top. 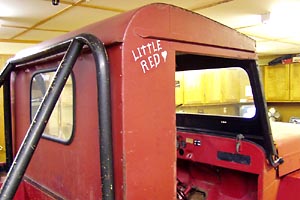 The rain gutters are clearly visible in this photo of the Standard halfcab on Keith Hepper's 1954 CJ-3B. However, there were no extras such as insulation, door locks or crank windows on this steel economy model. See an interior view (60K JPEG) showing the stamped reinforcing ribs and the original paint. See also photos of the steel door -- interior (70K JPEG) exterior (60K JPEG) and hinges (80K JPEG.) 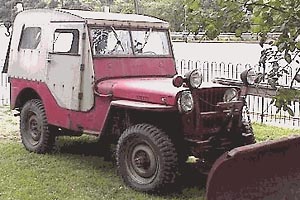 Among the aluminum tops the Standard Full Top (#5) was, and still is, very common. I owned one on a CJ-3A and it was quite effective in the Midwestern winter. It was noisy but cozy enough, even without insulation. I used it for one winter season but when summer came I removed it because without insulation and adequate ventilation it was stifling in the heat of the corn belt. Even with its limited visibility it was still a very popular working man's top. Mine had served as a road service vehicle at a filling station and garage. When I bought it there was the proverbial wooden plank with tire sections nailed to it for pushing cars.

This Sears Standard Full Top is on a 2A with snowplow in Carl Walck's collection in Pennsylvania. 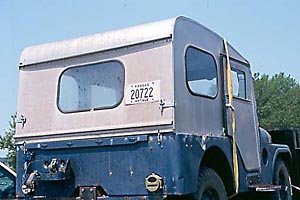 I am fairly certain that the top shown here is a later version of the Standard Full Top, the main difference being the larger, non-opening side rear window. This photo by Jim Allen shows the rear of the top on an M38A1, the military predecessor of the CJ-5. The liftgate allows almost 100% access when open. The latches are owner additions.

See a front view of the same top on a CJ-3B (50K JPEG). An interior photo (40K JPEG) with the liftgate open, shows a dramatic increase in light and rear visibility through the larger side rear windows, setting it apart from other low-priced aluminum tops. 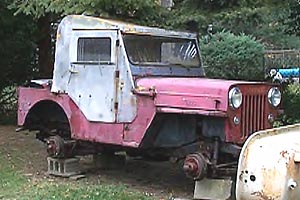 The Sears aluminum Standard Half Top (#6) was quite popular, as the lowest priced Sears hard top. The no-frills half top offered little more than shelter and sliding windows. It's seen here on a '54 CJ-3B owned by Ron Fisher.

The aluminum could also be painted; see a 1953 CJ-3B in Ontario (110K JPEG) photographed by Michael Pahkala. 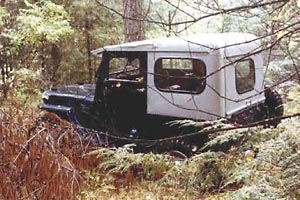 When Paul Provencher took his 1948 CJ-2A deep into the woods he heard a crunch. His hard top had sustained a two foot long dent above its door. His Sears Deluxe Aluminum Full Top (#4 in the catalogue) is the most attractive top among the Sears offerings; see also a front view photo (50K JPEG). The top was originally all white, but when Paul painted the Jeep he started with the doors. Note the 1971 catalogue describes the Deluxe top as painted green. 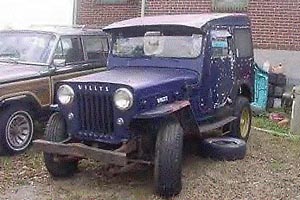 The Deluxe Full Top on Coby Byers' 3B is painted to match the Jeep. The softened corners, large windows and complex stampings of the roof give it a 1930's sedan-like appearance. Coby notes that the top is assembled with hundreds of rivets. 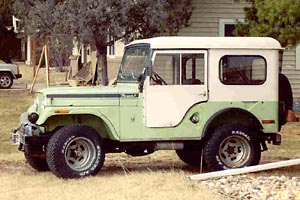 Steve Dunkel sent this photo of his 1970 CJ-5 Renegade I. Comparing it with the page from the Sears Jeep catalogue it most closely resembles the steel Deluxe Full Top. But it is aluminum, and its high quality suggests that it might have been a CJ-5 version of the aluminum Deluxe Full Top.

Steve mentions the heavy-duty doors and the insulated aluminum interior as evidence of quality construction. The top was definitely purchased from Sears, but visible in a rear view photo (70K JPEG) there is a tag on the rear roof with the name "Keyes" which may indicate the manufacturer.

Using the above figures it might be interesting to compare Sears and Koenig weights for comparable steel models. Remember that Koenig tops are made of 18-gauge steel, quite a bit heavier than Sears 20-gauge steel tops. -- Bart McNeil

Continue to Meyer Jeep Cabs or return to the Table of Contents.

Thanks to Bart for another installment in this continuing series, and to Jerry O'Neil and others mentioned above for the photos. -- Derek Redmond