Meyer Jeep Cabs for the CJ-5 and CJ-6 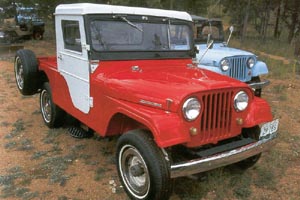 The 1960s saw the coming of the Meyer Jeep Cab for CJ-5 and CJ-6 owners. The cab was advertised as having been "owner-designed". It lays claim to being ideal for the construction site as well as the country club, and in the Meyer brochure the only Jeep shown is a Tuxedo Park Mark IV (CJ-5A), the deluxe version of the CJ-5. This CJ-6A Tuxedo Park Mark IV with Meyer half cab from Jim Marski's Historic Civilian Jeeps Collection was photographed by Jim Allen. 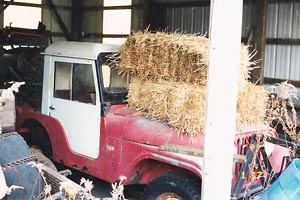 An early version of the Meyer half cab had two horizontally sliding window panes. Although by this time most Jeeps were fitted with electric turn signals, the windows were still uncomfortable in that it was not possible to open them fully. On this version the doors appear not to be easily removable. The doors are also missing the stamped stiffening ribs found on later model. This photo courtesy of Bill Norris. 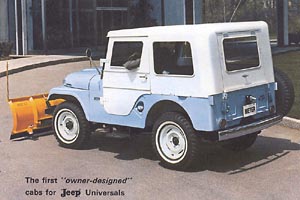 Several photos in the Meyer brochure show Jeeps with Meyer snowplows installed. As with Koenig Iron Works, Meyer was already in the business of supplying equipment for Jeeps, when it began manufacturing hard tops. Meyer cabs are easily identified by their unusual-shaped door windows and their doors with the two strengthening horizontal ribs. The rear of the full cab has a slight forward lean. Meyer refers to these features as lending a "modern" appearance to their cabs. They also mention "station wagon-like" rear visibility with the large rear windows. (That seems to be a stretch when comparing the Meyer cab windows with Kelly's Custom Cab and Koenig's Super Cab windows.)

Meyer focused only on cabs for the CJ-5 and CJ-6, which were sold only through Jeep dealers. They are all steel constructed, weathertight units with roll-down windows and insulated top and doors. The two protruding hinges allow full opening for easy entrance and for easy removal of the doors in hot weather. See an illustration of a CJ-5 half cab (70K JPEG) from the centerfold of the Meyer brochure. 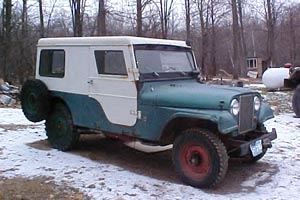 I first saw a Meyer top back in the 1960s. Being fresh out of art school, I was struck by the incongruity of the door window seeming to point one way and the rear side window seeming to point the other way. At the time I didn't understand why anyone would design a door window to look like that. If we compare it with the earlier window on the CJ-5 in the barn, the earlier sliding window makes more sense aesthetically, but it could never be a roll-down window as it could only roll down about 6 inches before it hit the tub wall next to the seat. The parallelogram window can be rolled diagonally all the way down into the door opening of the CJ-5. This makes sense if the manufacturer wants a fairly large window to open all the way.

It was very important that Meyer display this full opening window feature in its advertising, and that is why the driver in the cover photo has his arm resting out the window. The Meyer top was one of two, maybe three, tops manufactured at that time where one could do this comfortably. 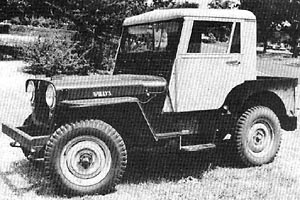 The origin of this Jeep window system was clearly the Carson Car Craft top from several years earlier. If we compare the Meyer windows with those already in use by Carson (right) their similarity is obvious. Meyer used the Carson style window but used their own two heavy duty door hinges, for easy door removal and offering the widest possible door opening. This Carson half cab suggests that the Carson door window still had the Meyer beat by several square inches, in the small triangle behind the roll down window. But where Carson failed to catch on, Meyer prospered with the diagonal window system. 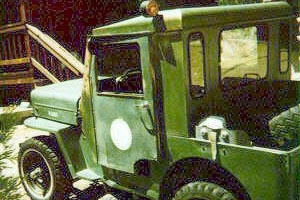 Koenig, on its Super Cabs, took a different route, designing their doors as rectangles overlapping the Jeep body instead of fitting the door into the tub opening, thus allowing its large rectangular windows to be rolled all the way down. These are two quite different solutions to the same problem. Shown is the Koenig Super 355 halfcab door; the closed door overlaps and extends outside of the tub about 1-1/2 inches.

The Koenig Super Full Cab (model 550) weighs 420 pounds. The Meyer full cab weighs 355 pounds. The 65-pound difference is likely due largely to the much larger and thicker doors on the Koenig cab.

The difficulty of finding space for the door window to be of optimal size and still roll or slide down is undoubtedly the main reason for the small door windows which prevailed throughout the Jeep hard top industry. Meyer, using Carson's system, seems to have come up with a reasonably low cost solution to a difficult problem. Using fairly simple sheet metal stampings with little of the complex construction of the Carson, Meyer used the Carson window system and was able to sell its top at a reasonable price. Without their door and window solution there was nothing particularly interesting about their top, but with easy-access doors and roll-down windows it became a winner. 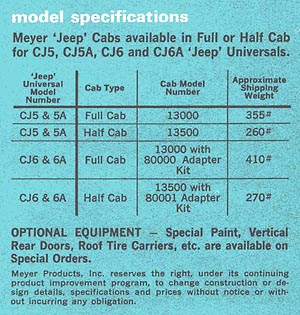 If the Meyer cab won the majority of CJ-5/6 cab sales, and its frequent appearances even now suggest it did, its success was in part due to its fairly lightweight, easily removed doors, and large roll-down door windows. It could most likely beat its major competitors: Koenig in price, and certainly Kelly in door window size.

In fact Meyer may have given Jeep buyers exactly what they wanted, and it may be what Meyer meant when they used the term "owner-designed". The door was wide, for easy entrance and egress. It was removable for summer ventilation. The window was relatively large for good vision and a smaller blind spot. The window allowed the individual to rest his arm on the window ledge. These creature comforts were important and found on very few other hard tops.

I still cringe when I see the two parallelogram windows on the full cab, each seeming to point in opposite directions, but at least I now understand why the door window looks the way it does. -- Bart McNeil 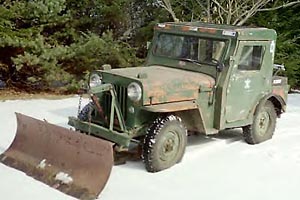 Note: Meyer cabs can only be used on the CJ-5 and CJ-6 without significant modification. Here is a 1958 CJ-3B owned by Jim Barr of upstate New York, with a Meyer half cab grafted onto it. The CJ-5, being wider than the 3B, caused problems with fit. Spacers were necessary between the tub and the cab sides to make up for the difference in width. 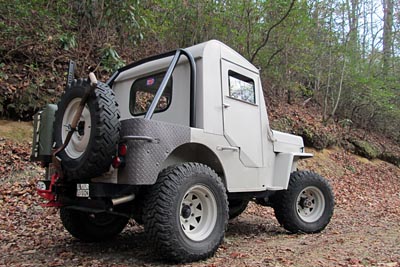 An aluminum halfcab bought by Mark Dulken in 2012, which appears to be a Sears top, has a tag (80K JPEG) indicating it was a Model 8828 built by "Meyers Industries" in Tecumseh, Michigan. This company does not appear to be connected with Meyer.

Continue to Porter & Reed Tailored Tops or return to the Table of Contents.

Thanks to Jim Allen, Jim Marski, Bill Norris, John Hubbard and Jim Barr for the photos, and as always to Bart. -- Derek Redmond