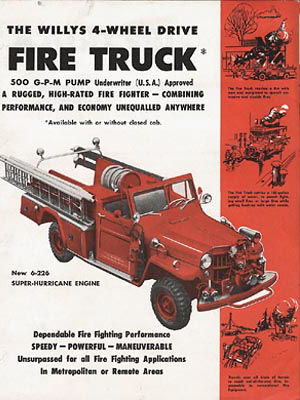 Willys Motors dealers marketed a fire engine version of the 4WD Jeep truck with the 6-226 Super-Hurricane engine. Starting in 1955, the fire truck had its own series of serial numbers with the prefix 55068-05 (see Willys-Overland Production Figures.) Less than a dozen were produced in the late 1950s, but there was a run of 83 built in 1960.

See More Jeep Fire Equipment Literature for all four pages of the brochure whose cover is seen here, including a set of sketches of the truck in action, and an extensive list of specifications. 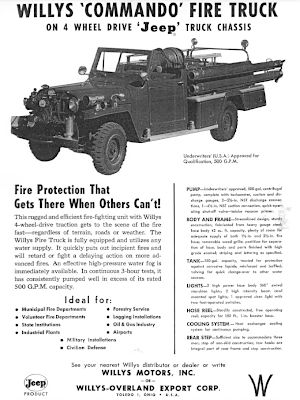 The truck was available with closed or open cab, and was soon dubbed the "Commando" (a name later recycled by Kaiser Jeep for the 1966-1973 Jeepster Commando.) The name was probably adopted to help distinguish it from the smaller "Jeep Fire Engine" built on the Universal Jeep platform.

The rear body and the equipment on these "factory" fire trucks was installed by General Fire Truck Company until they went out of business in 1957, and by Howe Fire Apparatus into the early 1960s. 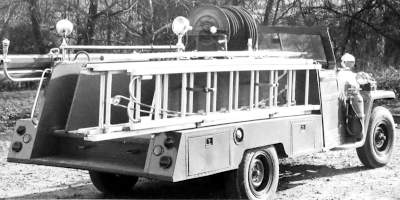 Although the body extended well back of the 118-inch wheelbase, the 18-foor extension ladder and the supports for the two 10-foot lengths of suction hose still projected several feet beyond the body. 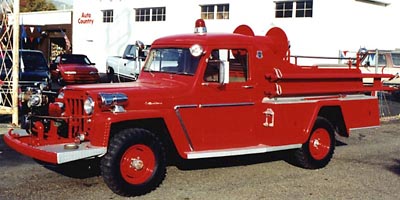 This early-60s hardtop Commando is recognizable as being built by Howe, by the large front platform and the high-mounted booster reel. It was photographed by Jolly Goodfellow in Utah, . 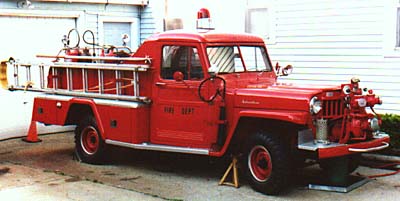 This similar but earlier Commando built by General of Detroit in 1954, served the city of Grandville, Michigan from 1955 until 1976, and now belongs to Gary Dreyer. Its booster reel sits lower than on the Howe, and its shorter pump platform has a piece of tubing added to protect the intake.

See more photos and details of the trucks from General Fire Truck Co.


Thanks to Jolly Goodfellow and Gary Dreyer. -- Derek Redmond