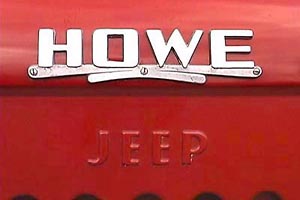 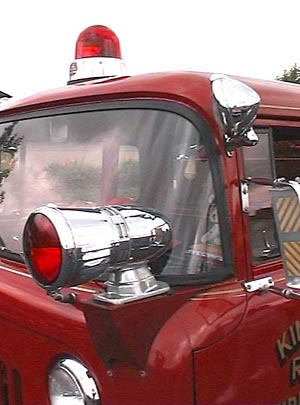 The "Howe Jeep" emblems above were photographed on the front of Richard Kimball's 1963 FC-170 Forward Control fire engine, built by Howe Fire Apparatus for the North Lewisburg, Ohio FD. The truck, Jeep serial number 61568 23601 and Howe 11359, has been nicely restored by Richard, who displays it periodically at shows.

The siren mounted on a bracket at the corner of the cab is a distinctive Howe feature, although for some departments the bracket was at the center of the cab front, or on the front bumper. See also a detail photo of the Federal Sign and Signal maker's plate (40K JPEG) from the front of the red Beacon Ray light on the roof. 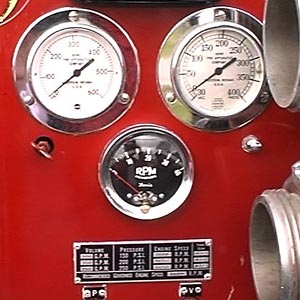 The truck is equipped with a fully functional Waterous 500 GPM pump, and the gauges that guide the pump operator are seen here.

The right pressure gauge shows incoming line pressure, perhaps 50 PSI (pounds per square inch) on a hydrant connection. When the pump is engaged and the engine throttled up using the RPM gauge below, that incoming pressure will drop, but should be maintained at something like 20 PSI to prevent risk of lines collapsing due to vacuum. The outgoing line pressure is shown on the left gauge. See a detail photo of the engine speed / line pressure guide (60K JPEG). 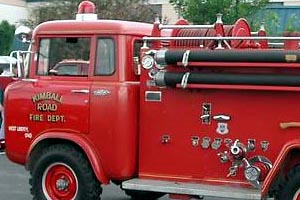 The left side pump controls and connections are seen in this photo, with the gauges just in front of the suction hose, and the throttle lever below them. See close photos of the other left side controls (80K JPEG) and also the right side connections (50K JPEG). 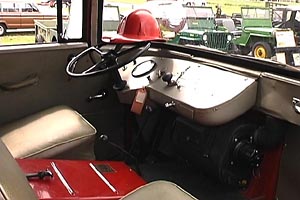 Richard Kimball lives in West Liberty, Ohio, and brought his FC to the Spring Midwest Willys Reunion in Toledo in 2002, where these photos were taken. Some of the other Jeeps in attendance can be seen in the background of this photo of the spartan cab interior.

Thanks to Richard and to Andrew Harvey. -- Derek Redmond