Volcano Watching in a CJ-3B

The Irazú Volcano, 14 miles (24km) east of Costa Rica's capital San José (see a map (1)) has erupted frequently in historical times; its most famous recent eruption began on 13 March 1963 and continued until 1965. (2) It produced limited amounts of lava, but took nearly 50 lives, and showered San José and much of the central highlands of Costa Rica with ash for over a year, causing heavy damage to infrastructure, agriculture and public health. 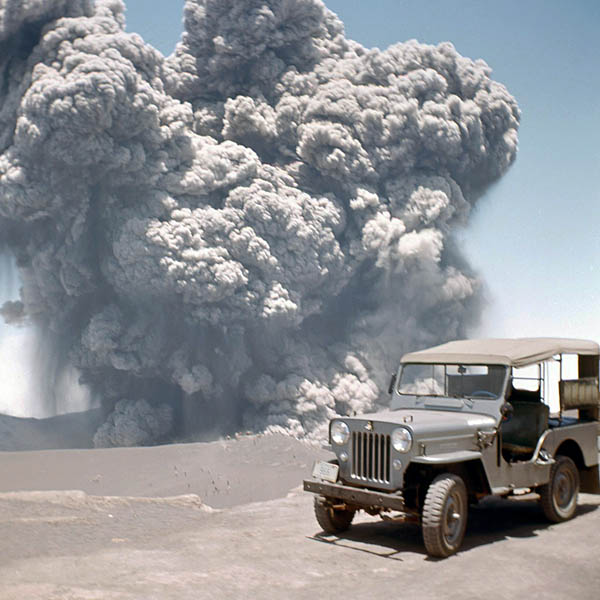 This dramatic photo of a Jeep parked at the top of Irazú during that eruption, was taken in November 1963. If you think the Jeep is dangerously close to the steam and ash blasting out of the crater, check the background and you'll see dozens of people climbing up to the edge for a closer look!

Bob Christy saw the photo in Will Martin's book So I Bought an Air Force. The book is the amazing but true story of how Martin bought a fleet of P-51 Mustangs and other aging planes from the Nicaraguan Air Force, and spent years getting them back to the U.S.

Surprisingly, the Jeep in the photo is from Japan. It's a CJ3B-J10, built by Mitsubishi between 1955 and 1961. Powered by the Japanese version of the Hurricane 4 engine, it has the standard 80-inch wheelbase, but with more overhang at the rear, providing about 7 inches of extra length.

Note: William Gamboa located the motor vehicle registration (70K JPEG) for the Jeep, which carried plate number 966. The make was listed as Willys, as stamped on the hood. The only giveaway to its origin was the Japanese engine number: JH418446.

Will Martin graciously provided a scan from his original slide (copyright W.W. Martin 2013), and described how he took the photo: "My wife Patty had flown down to Nicaragua with me in a B-26, and we went to Costa Rica after delivering the bomber. At that time tourists were allowed to go right up to the mouth of the volcano, although our host, Juan Bonilla, the airport commandant, had expressed concern about us doing that. We rode most of the way in his VW bug, but I believe we took that Jeep the final distance because the road wasn't good.

"Our visit was without incident. However shortly after, Irazú belched a large boulder, which landed on someone. The Costa Rican authorities closed the road to the volcano the same day." 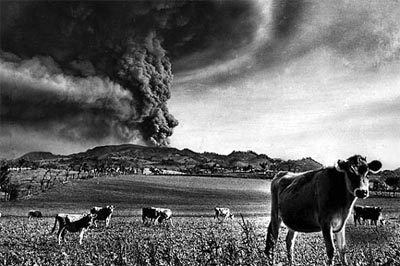 There is also a remarkable series of photos of the eruption by John Malmin, published in the Los Angeles Times in January 1964. Science editor Irving S. Bengelsdorf wrote in that article:

"For 10 months the almost 300,000 inhabitants of metropolitan San Jose have been living in the 'valley of the shadow of death.'

"The citizens of San Jose walk the street carrying umbrellas, but there is no rain. They wear sunglasses, but there is little sun. The interminable fall of ashes and cinders makes life miserable indeed. For the blizzard of 'black snow,' which does not melt, has turned this once lush and green metropolitan area into a tortured and crippled city. Parts of the Central Valley are dead, and other sections are dying." 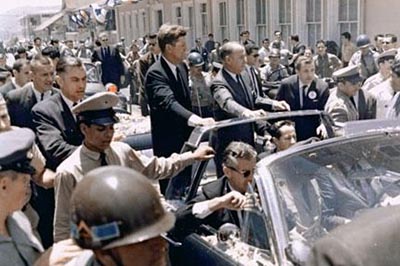 The early days of the volcanic activity in March 1963 coincided with the tumultuos reception for U.S. President Kennedy on his visit to Costa Rica. (4)

As LIFE magazine reported on 29 March, "The 11,260-foot-high Irazú volcano erupted spectacularly last week, scattering eye-smarting ashes on the capital of Costa Rica, but hardly anyone here gave it a thought. San José had a blowout of its own going strong -- an explosion of enthusiasm for John F. Kennedy." (5) 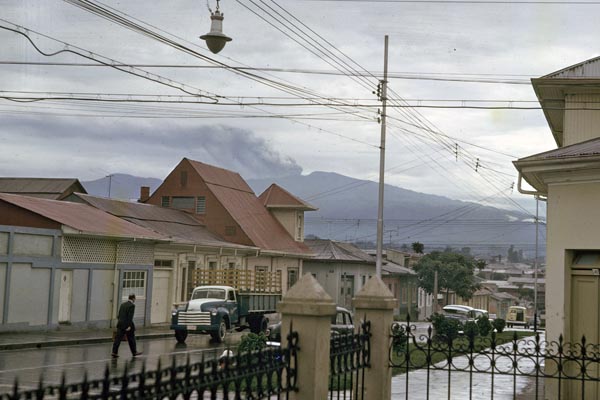 A 1966 study from the U.S. Geological Survey stated: "The initial outbreak on March 13, 1963 started with a series of great explosions that hurled out much ash, blocks, and bombs, but the activity soon settled down to alternating periods of explosive eruptions and quiet emission of steam." (7) 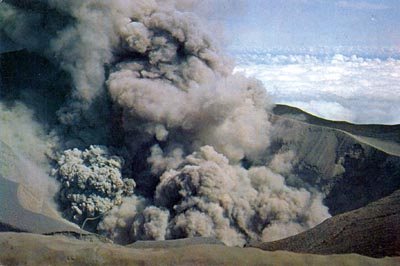 The study goes on to say: "Accelerated runoff of rainwater from the ash-covered slopes of the volcano caused destructive floods, mudflows, and landslides. The climax of the eruption probably occurred during December 1963 and January 1964, when ash and incandescent scoria were erupted voluminously and the magma rose to within 100 meters of the lip of the vent." (7)

It seems accurate to describe Will Martin's trip by Jeep to the edge of the crater in November 1963 as "playing with fire." 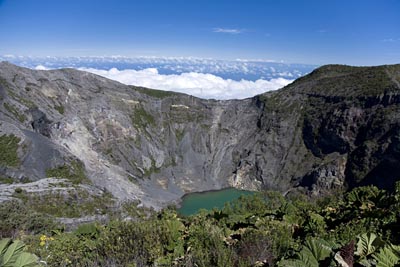 A similar view of Irazú, now part of a national park, was photographed by Rafael Golan in 2012. (9) The main crater, 1000 feet deep, contains the green lake Diego de la Haya. There is a road leading right up to the summit, with a bus service. From the top it is possible to see both the Atlantic and Pacific Oceans on a clear day, but the summit is often covered by clouds. (10)

There have been a couple of brief eruptions since 1965, the most recent being an explosion in December 1994. (2) 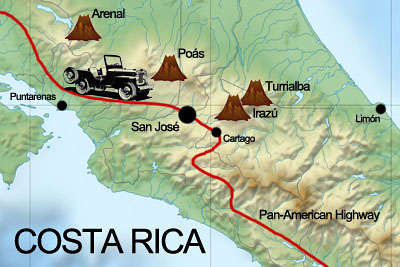 Irazú is the highest of several active volcanos in Costa Rica, as seen on this detail from the map. As of 2017, the most recently active of the group has been Turrialba, 12 miles (20km) east of Irazú. There have been intermittent explosive eruptions of ash since 2014, including three in early 2017. 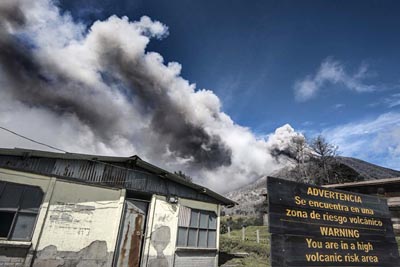 Turrialba's eruption in January 2017 is seen here from the evacuated town of La Central. Photo by Ezequiel Becerra/AFP courtesy of the Tico Times. 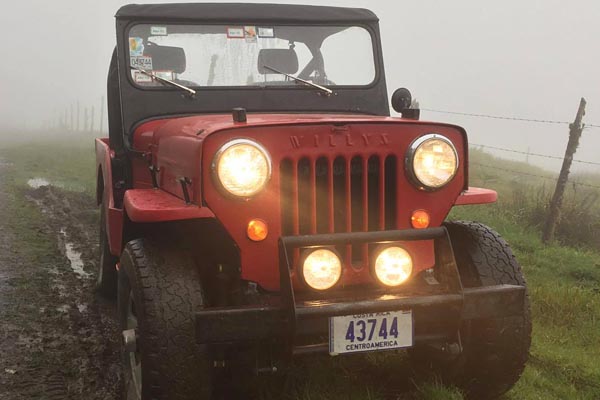 William Gamboa sent a photo of his CJ-3B taken during the April 2017 eruption.

This is near Cartago, which is closer than San José to the two volcanos, and right in the path of the ash if the wind shifts toward the south. 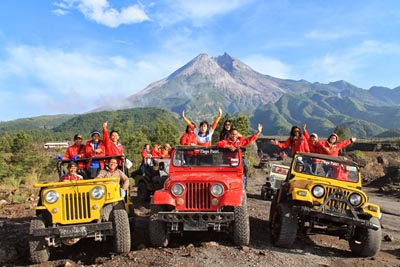 If you like the idea of volcano watching in a Willys Jeep, there is at least one place where you can still do it -- Mount Merapi ("fire mountain") in Indonesia

According to Wikipedia, "Smoke can be seen emerging from the mountaintop at least 300 days a year, and several eruptions have caused fatalities." There is a museum commemorating a village destroyed and over 300 people killed when Mount Merapi erupted lava on its southern and southeastern slopes in 2010. 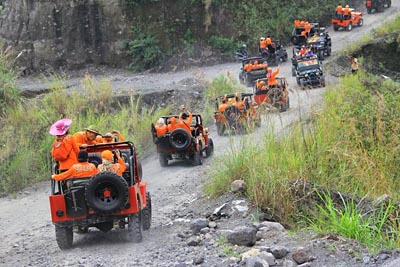 The Merapi Jeep Tour Community is a co-op of local drivers offering Jeep tours to the museum and up a pretty rough road to the lava fields near the top of Mt. Merapi. For more details, see Tourism in Java's Land of Ghosts from The New York Times.

Thanks to Bob and Mindy Christy for finding the photo of the Jeep at Irazú, and Will Martin for providing a scan of the photo, from his book So I Bought an Air Force. -- Derek Redmond