CJ-3Bs Glimpsed in the Movies

Dante's Peak  and The Lords of Discipline

Here are a couple of pretty dark movies, with brief Jeep appearances. 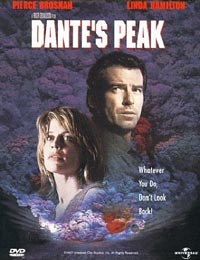 According to "A Geological Guidebook to Dante's Peak" (150K Word file), this movie is scientifically fairly accurate, as disaster movies go. The first sequence of the movie depicts a volcanic eruption, which results in massive destruction and the death of the girlfriend of the movie's main character, a geologist played by Pierce Brosnan. Another geological critique of Dante's Peak concludes that this scene was probably based on the 1985 eruption of the Nevado del Ruiz volcano in Colombia (Wikipedia), which resulted in the death of over 23,000 people, making it one of the deadliest volcanic eruptions in recorded history.

The rest of the story occurs four years later, as the same geologist tries to warn the residents of a small town in Idaho about unusual activity from the nearby dormant volcano. It's loosely based on the 1980 Mount St. Helens eruption.

The hero arrives in town in a heavily modified Chevy Suburban supposedly belonging to the U.S. Geological Survey. We know it's going to be a good movie for automobile fans when he passes a 1964 Dodge window van.

There are some traffic jam scenes when the volcano does indeed start to erupt, and everybody tries to get out of town. This '74 Jeep Wagoneer is probably a good choice of ride in the circumstances.

A 3B might be a good escape vehicle too -- skip the clogged freeway and go cross-country. But the bikini top on this one won't provide much protection from the falling volcanic ash. It's seen for only a few seconds, but a close look reveals the name "Afternoon Delite" painted on the side of the hood. When I first posted this page years ago, I asked "Anybody recognize this Jeep?" 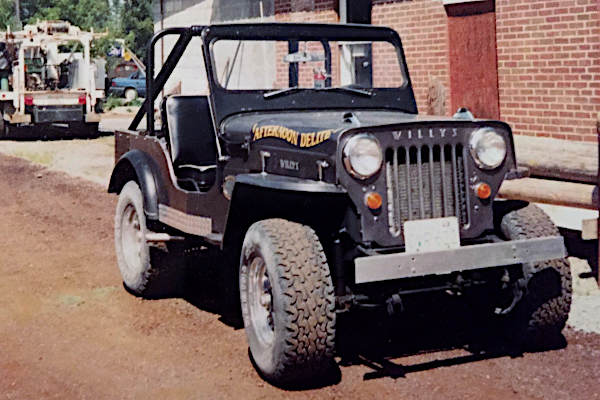 Well, in late 2020 I heard from Robert Howard in Spokane, Washington, who recognized it and sent a photo!

Robert said, "Afternoon Delite is my old Jeep. I bought it from the guy who originally built it. I know everything about that Jeep. He built it for his wife and I talked him out of it. I sold it to a guy around 1992. Would you happen to know who has it now?"

In the movie, the CJ-3B is entirely upstaged by the hero's Chevy. Taking advantage of its snorkel, he avoids the traffic jam by driving across a river, in a sequence that offroad fans will enjoy. Unfortunately the vehicle is later submerged in lava. The fate of the CJ-3B is never revealed.

Thanks to the Internet Movie Cars Database for some of these frame enlargements. 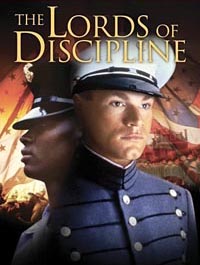 The Lords of Discipline is a story about reluctant racial integration in a private military academy in the southern U.S., which many people feel does not do justice to the Pat Conroy novel on which it is based. But one reviewer at the IMDB does say, "I was impressed with how well this movie captured the flavor of time and place. As a viewer I easily felt that it was Charleston, SC in the mid 1960s."

Although some scenes were shot in Charleston, the college used as a shooting location was actually in England. 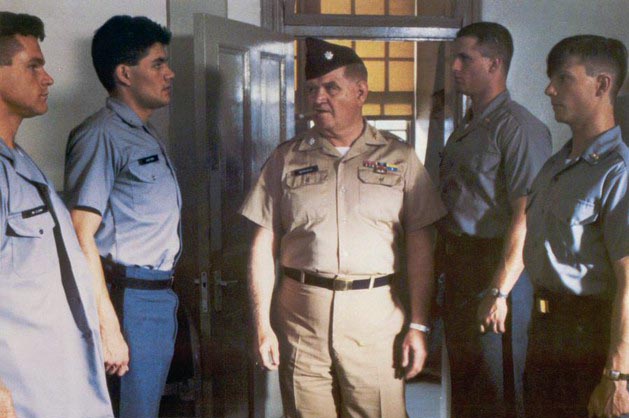 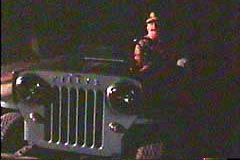 The appearance of the CJ-3B is again extremely short, as the colonel keeps an eye on where the young hero is going one night. 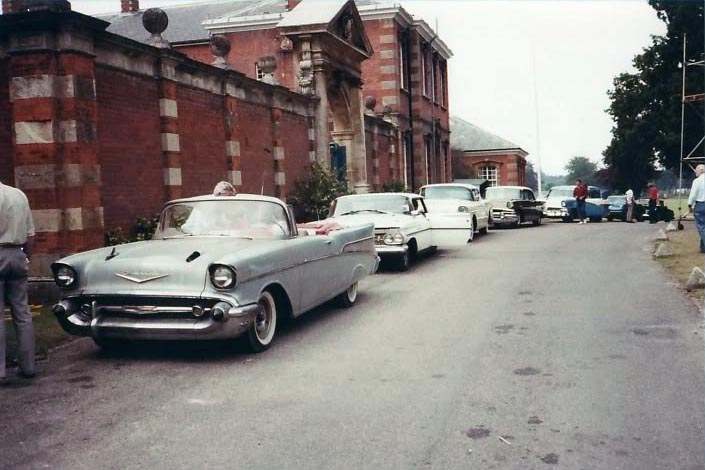 The vehicle that steals the show is again the hero's Chevy -- this time a 1957 convertible. This photo courtesy of NSRA.org.uk shows cars used in the production, and was taken on location in the UK.

Thanks to Patrick Gray and Jarek Skonieczny for spotting these 3B's on the screen. -- Derek Redmond