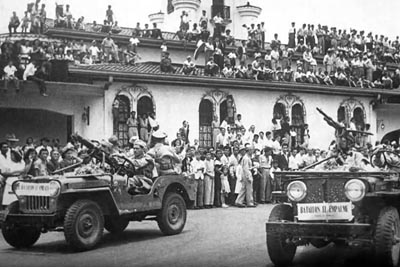 Probably the first Willys Jeeps in Costa Rica were surplus MBs supplied as United States military aid to the army. Ironically, that army lost the 1948 civil war to the "National Liberation Army" seen here, whose CJ-2As were probably among the first "civilian" Jeeps seen in the country. The US tacitly supported the rebels, but not with hardware, so their new CJ-2As were probably purchased through Guatemala. (Foreign Relations Of The United States, 1948, The Western Hemisphere, Volume IX, US State Department.)

The parade seen here, on 28 April 1948, marked the conclusion of the 6-week civil war, which led to a new constitution and the abolishment of the military in Costa Rica. 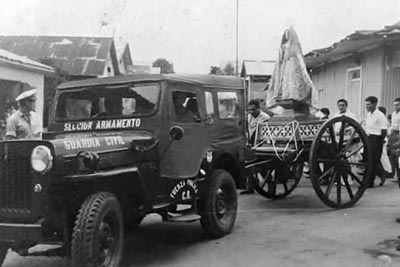 The new government received US aid in the 1950s and 1960s, including M606 Jeeps for the Guardia Civil, the para-military police force which had replaced the army. 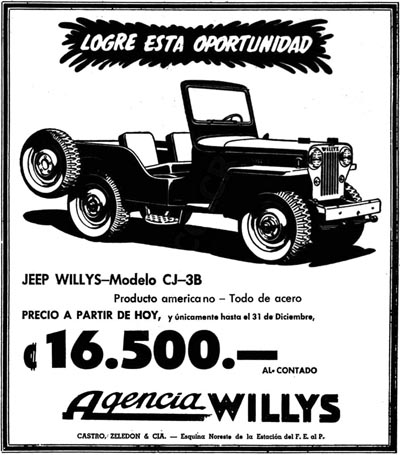 CJ-3Bs were imported for sale by Castro, Zeledon & Co. who had offices in the "northeast corner of the station of the F.E. al P." (The Ferrocarril Eléctrico al Pacífico railway connected San José with the Pacific port of Puntarenas. See a map of Costa Rica, 230K JPEG.)

In another ad (170K JPEG) aimed at agriculture, there is some local detail added to the illustration, and the headline is "Mr. Farmer, take this opportunity!" 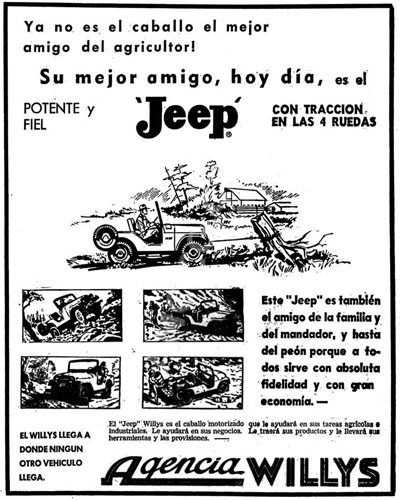 A CJ-5 is seen in another 1957 advertisement. Like other countries in Latin America, Costa Rica imported the CJ-5 as soon as it was available, and the CJ-3B was then primarily seen as a military Jeep. 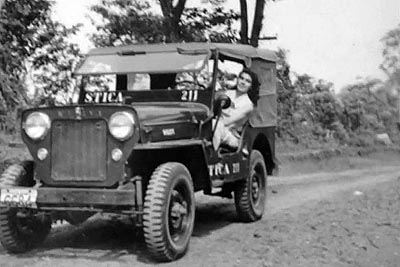 But military hardware was not the only aid supplied by the United States. This CJ-3B in use by the agricultural development agency STICA (Service Técnico Interamericano de Coooperación Agricola was probably provided by the US. The lady is making good use of the ventilating windshield. 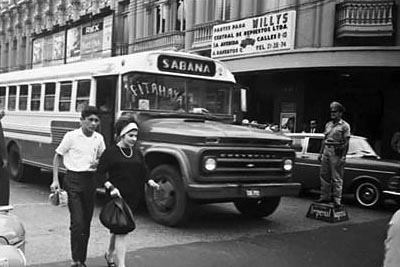 Parts were also imported. This photo found by Julio Segura shows the parts showroom of a Willys dealer on the corner of Central Street and 2nd Avenue in San José, circa 1966-67. 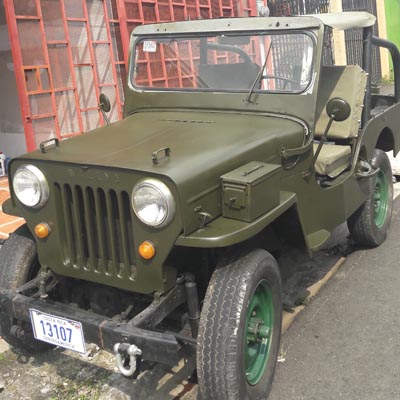 A recent CJ-3B restoration is by Jose Soto, who told us in 2017: "I found this Jeep on a farm on the border with Panama in terrible condition. After 2 years I had it running and in good condition. It is impossible to go anywhere unnoticed; I'm proud to be the owner of this iconic vehicle." 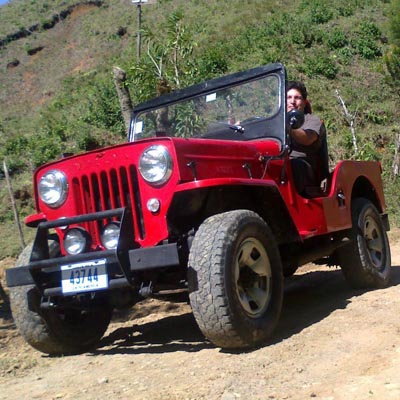 William Gamboa's 1955 Willys CJ-3B in Cartago was nicely restored some years ago -- it was featured on the cover page of CJ3B.info in 2012. 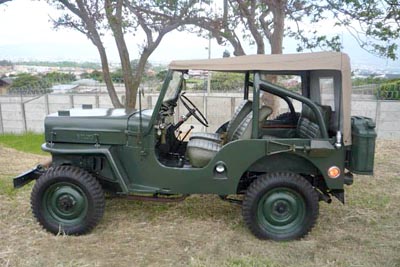 Julio Segura's 1954 CJ-3B was used by his father to deliver milk when Julio was a boy. Years later, long after the Jeep had been sold, Julio searched across the country for it, and was able to buy and restore it, for himself and his father to enjoy. The Jeep has Costa Rican historic vehicle plates. 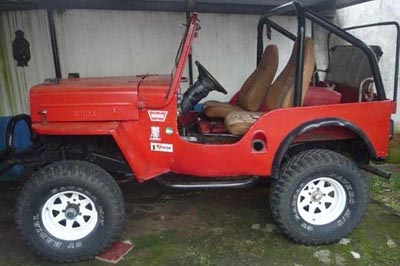 Julio also has a 1957 3B which he has recently repainted (60K JPEG) and is returning closer to stock condition. 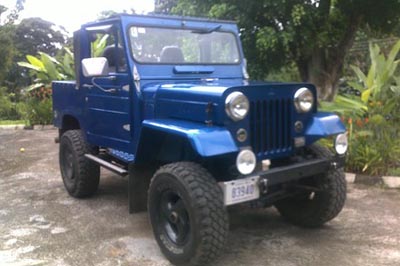 It seems quite likely that Jeeps were also imported new from Mitsubishi in Japan, since Costa Rica was one of the first countries to import Toyota Land Cruisers, in 1957. There are still a number of Mitsubishi Jeeps around.

The Club Jeep Willys Costa Rica includes more Wranglers than Willys, but their annual Expo Jeep is a good place to see a few flatfenders together. 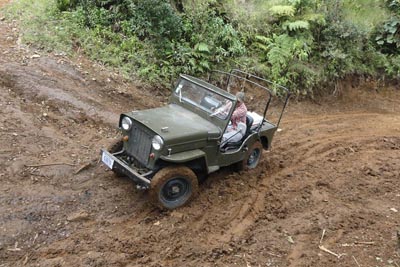 And to see them in action. This is Rodrigo Aguero's 3B in the mud at Expo Jeep 2016. 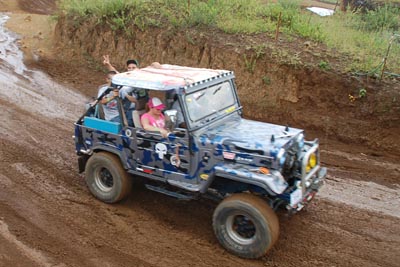 A Mitsubishi or two will show up as well. This one is well-disguised with plenty of front-end accessories. 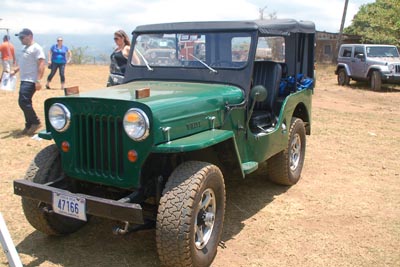 Also at Expo Jeep 2016 was this well-restored early-60's model belonging to Dannuer Marchena. 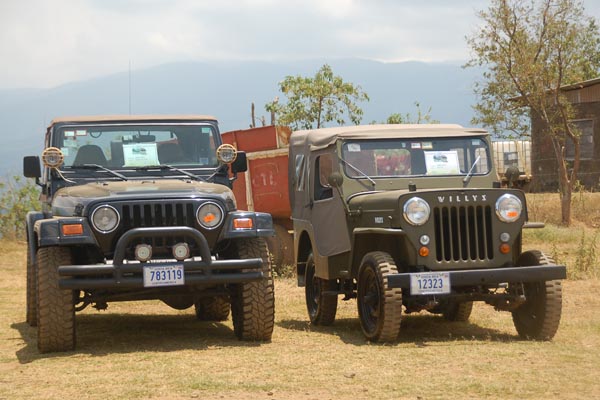 Nicely expressing the spirit of Jeep history old and new in Club Jeep Willys Costa Rica, is this 2016 side-by-side of a TJ and CJ-3B.

Thanks to the club for these photos, and thanks to Manuel Solera for information. -- Derek Redmond