There has been a large and varied collection of "popemobiles", the modified utility vehicles used by popes over the past half-century to travel by road and allow onlookers the best possible view of the pontiff as he passes. (See more at the bottom of this page, about how the white popemobile became a tradition.)

But a widely unrecognized fact is that the first popemobile was a CJ-3B Jeep in 1964. 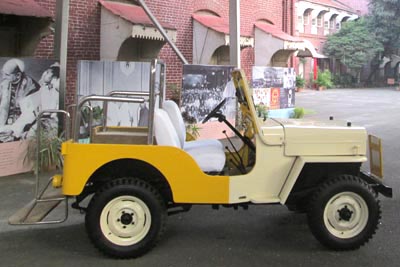 Dan Bowles reported in 2011 that the Indian-built Mahindra Jeep used by Pope Paul VI during his 1964 visit to India (see below) was still on display in the lobby of Mahindra & Mahindra's purchasing/engineering building in Pune, India.

Then in December 2014, Rudolf Furtado photographed the Jeep (right) in an exhibition celebrating the 50th anniversary of the pope's visit, at St Joseph's School in Bandra, Mumbai (formerly Bombay). (1) 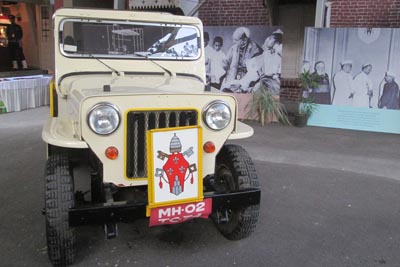 The photos reveal that the first popemobile was painted in the white and gold colors of the Vatican flag, rather than all-white as it appears to be in photos from 1964. In fact, it is more of a cream than the white which has become the standard for popemobiles.

However, the CJ-3B on display also has a number of details which don't match the Jeep in the 1964 photos below, which suggest it may in fact not be the original. There are differences in the paint trim, chaff screen and front marker lights. Most tellingly, the later-style wipers are mounted on the cowl rather than above the ventilating windshield. 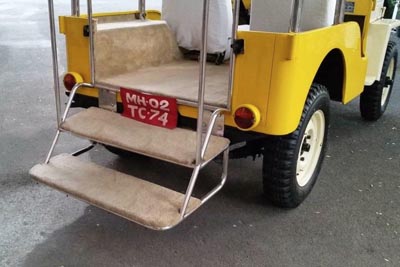 The rear steps fabricated by Mahindra & Mahindra are not visible in the 1964 photos, but the later-style roll bar on this vehicle is clearly different from the smaller-diameter tubing used for the handrail in 1964 (below). See also the 1964 serial number plate (130K JPEG) and the ignition key (70K JPEG) with an aging cardboard tag labelled "Pope's Vehicle." (2)

The differences visible in the photos do raise the question of whether the popemobile was reproduced by Mahindra at a later date.

In an article at Midday.com however, Capt. A. Lambhate of Mahindra is quoted as saying, "The Jeep has been preserved for half a century, in top condition. It was brought to Bandra for the exhibition on a trailer. This is not because it cannot be driven but the Jeep is not a registered vehicle and does not have a number plate. It is operational though, and in mint condition. It is also taken for a small chakkar (round) every Sunday around the plant. It is polished and looked after. We are very proud of it."

Jim Gregor has an interest in church history, and he ran across a small paperback book entitled The Pilgrim Pope, 1965. The book documents three international journies made by Pope Paul VI, who became the first head of the Roman Catholic Church to travel outside of Italy since 1812. His pilgrimage to the "Holy Land" of Jordan and Israel in 1964 was followed soon after by trips to India and New York City. 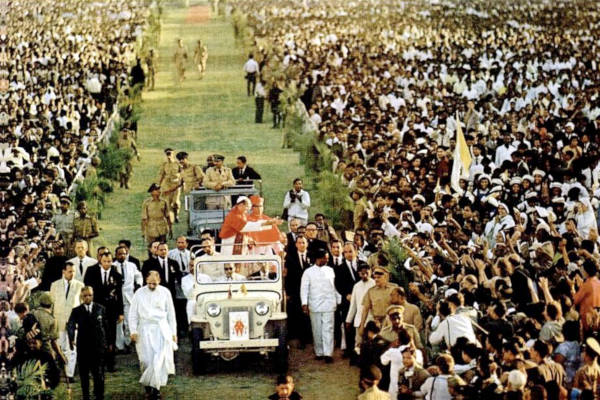 In this photo published in the 18 December 1964 issue of LIFE, the pope rides through the crowd to the stage, in a white Mahindra CJ-3B decorated for the occasion, followed by military officials in another CJ-3B. (3)

See another photo of the vast crowd (200K JPEG) and the military Jeep, from The Pilgrim Pope. (4) 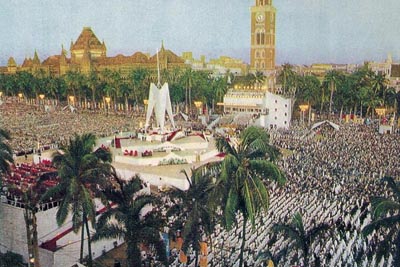 In the large copy (200K JPEG) of this photo (5) you can see the Jeep parked behind the huge altar erected for the occasion.

British Pathe newsreel film of the visit includes another angle (70K JPEG) of the Jeeps coming down the aisle, as well as revealing that a white Chevy Impala (70K JPEG) was also used by the pope during the visit. 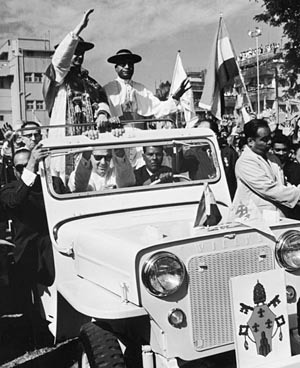 It seems likely the Jeep was a local idea, but it certainly established the simple, practical design seen in most later popemobiles. In this photo there is a visible "WILLYS" logo, which some early Mahindra Jeeps had on the grille. The photo taken by photographer Paul Schutzer as the pope made his way through the streets of Bombay, is from the LIFE Photo Archive. (3)

LIFE's sister publication Time discussed the pope's trip in its 4 December 1964 edition. The cover story of that issue was "The Congo Massacre," in which scores of hostages including Dr. Paul Carlson were killed by Simba rebels in Stanleyville before the arrival of Belgian paratroopers (see Military Jeeps in the Congo on CJ3B.info.)

Perhaps the events in the Congo were on Pope Paul's mind when upon his arrival in Bombay he said, "Would that the nations could cease the armaments race and devote their resources and energies instead to the fraternal assistance of the developing countries... may this anguished cry go forth to all the governments of the world." 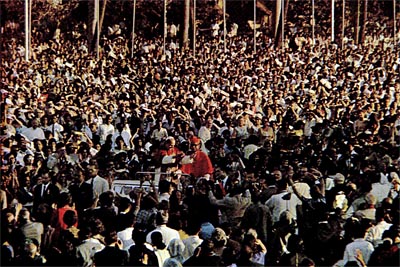 The Time article "Bombay's Spiritual Spectacular" began: "This week Paul VI will add 8,000 miles to his record as the most travel-minded Pope of history by flying from Rome to Bombay for Roman Catholicism's 38th Eucharistic Congress. More than 100,000 Catholics, including 14 cardinals and 300 bishops, are expected to attend this spiritual spectacular."

Time also reported that "With more than 20,000 extra cars in town -- including the Pope's white Lincoln Continental, given him by an alumnus of Notre Dame -- Bombay police are resigned to the prospect of monstrous traffic jams." 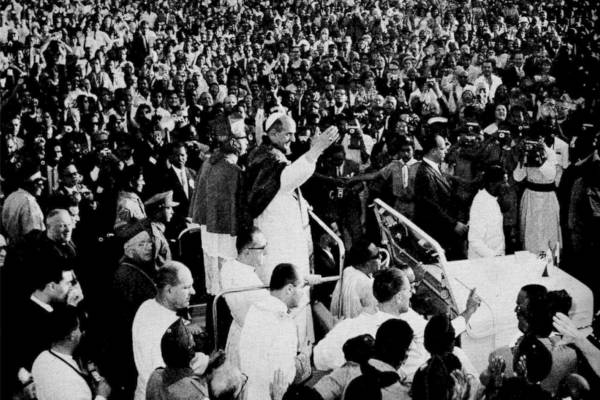 So maybe the traffic situation is why the pope ended up in the more maneuverable Jeep instead of the Lincoln? It would probably have been a better getaway vehicle in case of any trouble in narrow, packed streets.

Time had mentioned that "There are blunt posters on the streets of Bombay warning that 'Christianity is a danger to Hinduism.' Indian officials minimized the threat to the Pope, but put a number of Hindu fanatics in protective custody and strengthened the 16,000-man Bombay police force with 3,000 troops from the Maharashtra state police."

These two photos of the crowds are from The Pilgrim Pope. (4)

It has been widely reported that on his departure from India the pope gave his Lincoln Continental to Mother Theresa, who raffled it off to raise money for the poor (see the Washington Post.) It has passed through various hands and is now reportedly in an automotive museum in Pune, although photos of it there (90K JPEG) show it to now be painted gold rather than white. (6)

Better known is the black Lincoln limousine (70K JPEG) converted by Lehmann-Peterson for the pope's visit to New York in 1965, the first time a pontiff travelled to the Western Hemisphere. (7) During his stay in New York, he celebrated mass at Yankee Stadium, adressed the UN, and visited the World's Fair. 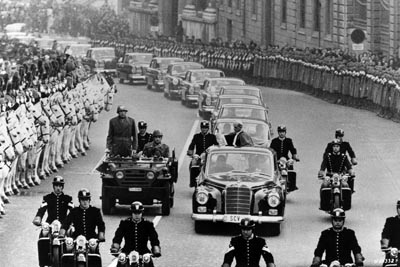 So how did that Mahindra Jeep turn into the wildly popular tradition of pontiffs riding in white utility vehicles? In this remarkable, undated photo (8) of Paul VI reviewing Italian troops in his Mercedes 300D, he appears to be looking over at his military escort in a Fiat Campagnola (9) (240K JPEG) and thinking, "That looks like more fun." 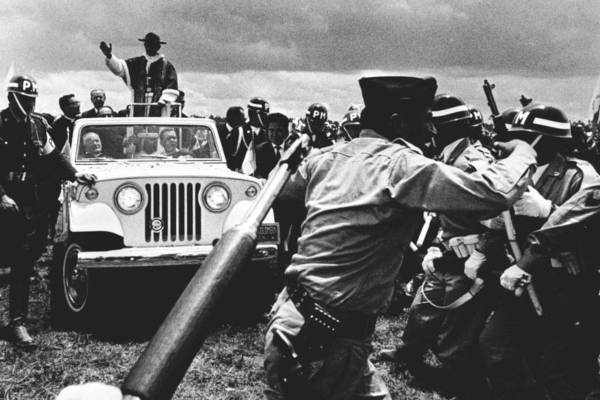 It turns out that the second popemobile (as opposed to a limousine) was also a Jeep!

In Colombia in August 1968, during the first visit by a pope to Latin America, Pope Paul VI rode in a brand new Jeepster Commando C-101 Convertible.

Federico Cavedo found this photo by Raymond Depardon, of Colombian military police clearing the way as the pontiff travelled to deliver mass to campesinos outside Bogota. (10)

In the pope's remarks on that day, 23 August 1968, he condemned injustices suffered by the poor, so it was perhaps appropriate that he didn't arrive in a Rolls Royce as he did in Australia (250K JPEG). (11)   The white Jeepster was very different from the black limousines used during most of Paul VI's world travels in the late sixties (although he did ride in a military Land Rover (120K JPEG) during a brief stopover in Hong Kong in 1970.) (12) 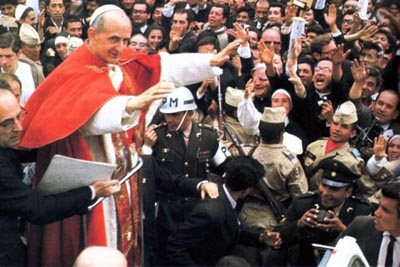 An open vehicle did give enthusiastic crowds the best possible view of the pontiff, and the Jeepster provided for Paul VI in Colombia in 1968 perhaps reminded him that he felt less distant from the people than when he rode in a limousine, even with a sunroof. This color photo of the 1968 Colombian visit unfortunately shows only the corner of the Jeepster's windshield. (13) 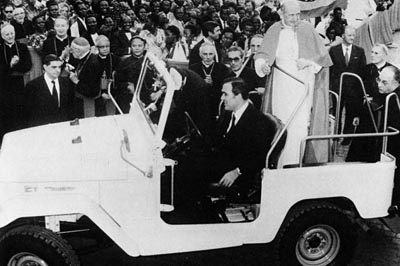 By 1976 the Vatican had obtained a Toyota Land Cruiser for Paul VI to use in Rome, as seen in St. Peter's Square in this photo. (14) Because the Land Cruiser is the earliest popemobile in the Vatican Museum (15) (100K JPEG), it has been referred to as the first of the white "Jeep-type popemobiles."

But it was the CJ-3B in Bombay that really set the pattern for future popemobiles, and it deserves its place in history.


See much more popemobile history in Jeepney Popemobiles and see The Popemobile at Night in 2015, on CJ3B.info.

Thanks to Jim Gregor for scanning the photos from The Pilgrim Pope, Todd Moulton and Federico Cavedo for finding additional photos, and to Anoop Thomas Valliyil for information on the Mahindra Jeep. -- Derek Redmond

See other Mahindra Jeeps on CJ3B.info.