Replacing the flathead engine in an early flatfender with an F-head or other taller engine, sometimes involves changing the carburetor or cutting a hole in the hood (see Hurricane Engine in a Low-Hood Jeep.) Another approach is to raise the whole hood, as the Willys-Overland Engineering Department did when they spent three years designing the CJ-3B (see New Universal Jeep Designs,1949-53.) Here are some examples I've run across, and as it happens several of these were done to make room for a Ford V8. 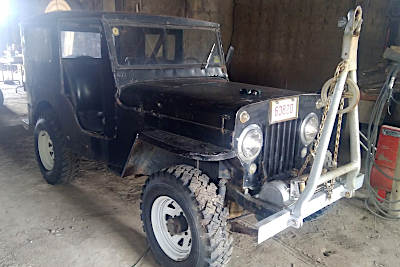 Derek Marquez in Colorado owns this '47 CJ-2A, with a high hood to accommodate a Ford flathead V8 (130K JPEG). He says he understands it was modified sometime in the late 1960s at a coal mine machine shop in New Mexico, and comments, "The power in that jeep is awesome." 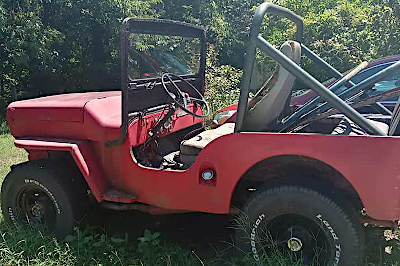 The approach on this one was quite different, but it also fits around a Ford flathead V8 (100K JPEG). Instead of the whole cowl being raised, there's a slope up to the hood.

I don't know the background of this CJ-3A, which was bought by Gary Real in 2021. 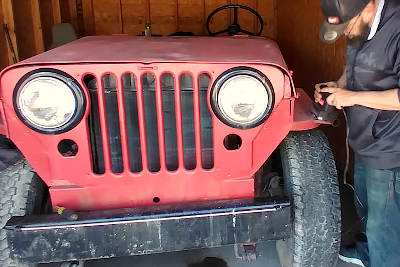 The front view is also different from all the other examples on this page, because instead of inserting a new panel above the original radiator guard, it's raised and several smaller pieces fill the gaps below. 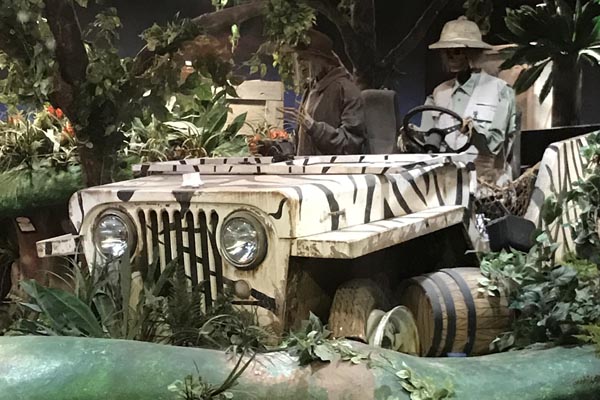 Hard to know exactly what it is that these zombies are driving. It's part of the "Tomb Rider 3D" attraction in San Antonio, Texas, a 5-minute adventure ride that most TripAdvisor reviews suggest is overpriced and suitable mainly for young kids.

I thought for a moment that this might be where the replica Jeep from the 2006 Rose Bowl parade float ended up. But the zebra striping is different. Thanks to Paul for the photo. 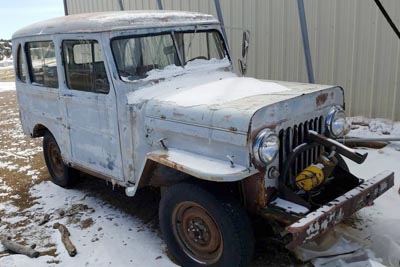 Glenn Byron saw this FrankenJeep listed online for sale in the Denver area in early 2017. Apparently a Station Wagon body grafted to a flatfender front end, it uses sheet metal panels on the front and sides to fill the gaps under a raised hood. The seller said it has a flathead engine, but then again the seller also claimed the vehicle is "all stock." 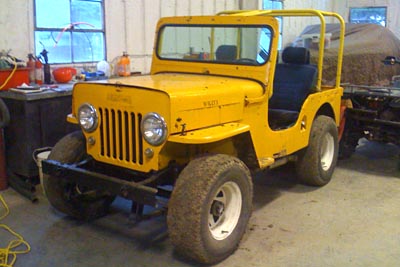 Ken Kuehnemuth ran across this CJ-3A which was apparently owned by CP Rail. He reported, "The unusual thing is the high hood and grille. It seems that it was made taller to accommodate a higher radiator. According to the VIN plate it is a 1953 CJ3A s/n 24137."

Ken says the modifications are very neatly done, as if they were done at the factory, and the engine is a 289 V8. Anybody have any more insight into who did this and why? 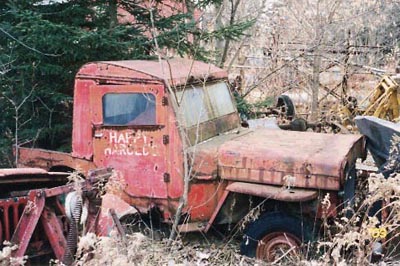 Bill Norris says, "I was out lurking around over the weekend, and found this oddity out in a farmer's field. At first I thought it resembled the Lycoming Jeep. I don't know what it started out life as. It is a CJ-2A windshield for sure. The odd hood job and increased cowl make it look like a 3B."

See a closer front view photo (60K JPEG) of the Jeep, which has "Happy Harold's" painted on the door of the Sears aluminum halfcab. 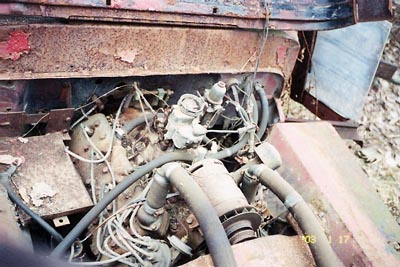 Bill comments, "The interior was full of driveline components, and the dash was really cobbled up. It's an interesting conversion to fit the flathead Ford under the hood.

"It was hard to really get a good look at it because of all the trees growing up around and the junk leaning on it. I tried to hold everything up that was leaning on it while snapping a shot." 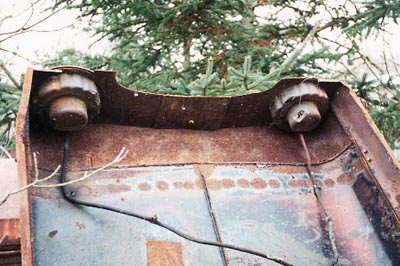 "You'll notice that the headlights are attached to the hood," Bill adds.

This interesting solution to the problem of creating a taller grille (perhaps inspired by the Oglesby cast aluminum toy Jeeps made in the 1950s?) makes it pretty clear that Harold's masterpiece had nothing to do with inspiring the design of the CJ-3B by Willys-Overland. 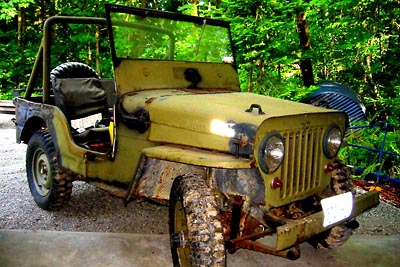 Dave Lindgren saw a modified CJ-2A offered for online auction in early 2003 with some similarities to Happy Harold's, although somewhat closer to an actual CJ-3B grille and hood.

Thanks to all the contributors for the photos. -- Derek Redmond