According to Vehiculos Tacticos del Ejército Argentino by Gastón Javier García Loperena, the Argentine Army received a total of 292 M606 Jeeps from the United States government, the first batch still under the nameplate Willys, but the majority under Kaiser. The American MDAP (Mutual Defense Assistance Program) supplied 25 Kaiser Jeeps in 1964, 95 in 1965, eleven in 1966, 90 in 1967 and finally 71 in 1968. 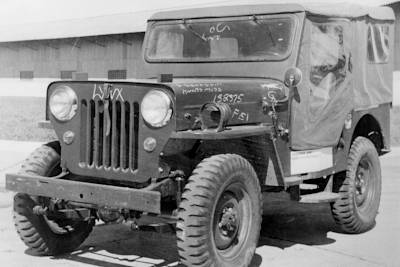 This appears to be one of that small batch of eleven Jeeps, just arrived from the USA in 1966 complete with canvas enclosure including side and rear curtains and doors. Its serial number 132375 is handwritten on the hood along with the comment "2 gearshift knobs miss(ing)"! There are also a few other codes -- can anybody interpret the abbreviations "LYWX" or "FEI"? 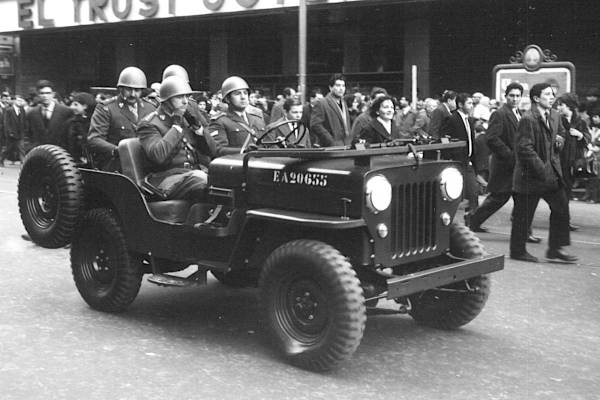 Gastón sent several photos of M606 Jeeps on parade in Buenos Aires during the 1960s. "EA" in front of the Army hood number stands for Ejército Argentino.

The parade appears to just be getting underway in this shot, as a Colonel adjusts his helmet while onlookers hurry toward Plaza de la República for a better view. See also this M606 sitting empty before the parade (250K JPEG). 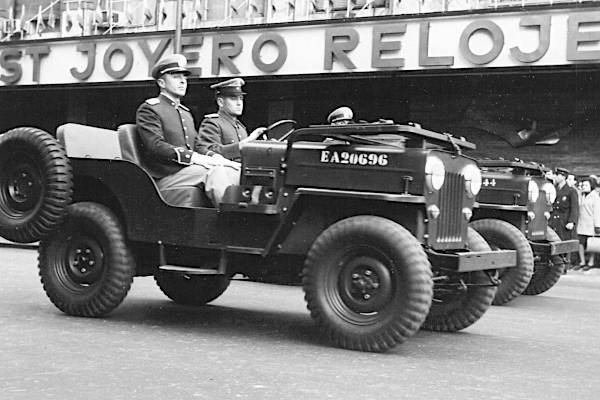 This photo and the one above were taken in front of iconic jewellry store El Trust Joyero Relojero ("The Jeweler Watchmaker Trust") on Avenida Corrientes. Since 1999 this location has unfortunately been occupied by a McDonalds restaurant. 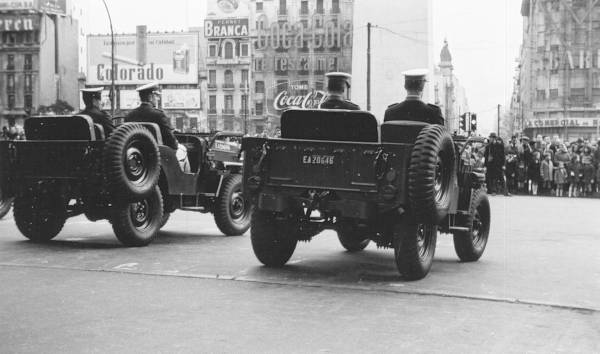 Looking from behind, we see the same Jeep EA20696 heading out from Avenida Corrientes into the Plaza de la República, carrying a high-ranking officer in full dress. In the background, the lower portion of a 67.5 meter (221 foot) obelisk can be seen in the center of the plaza. 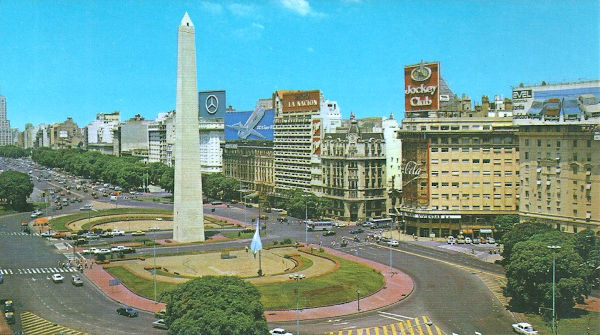 The obelisk and the plaza are located at the intersection of Avenida Corrientes and Avenida 9 de Julio, named in honor of the Declaration of Independence of Argentina on 9 July 1816. El Obelisco was constructed in 1936 to celebrate the 400th anniversary of the founding of Buenos Aires.

In this 1986 postcard view, the Coca-Cola sign seen in the 1960s photo above, has been replaced by one on the building across the street. 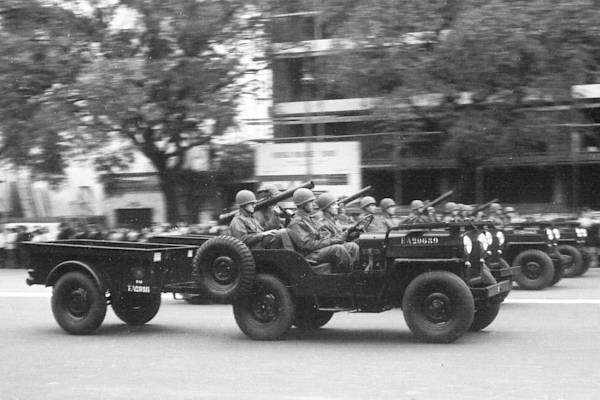 Another parade photo at an unidentified location suggests that since the Army didn't receive Jeeps with 106mm recoilless rifles, they set up some of the M606s for squads equipped with the smaller bazooka, with trailers to carry ammunition. 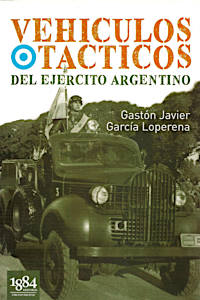 Thanks to Gastón Javier García Loperena for these photos sourced from the archives of the Argentine Army Military College for his 2017 book Vehiculos Tacticos del Ejército Argentino Argentino. 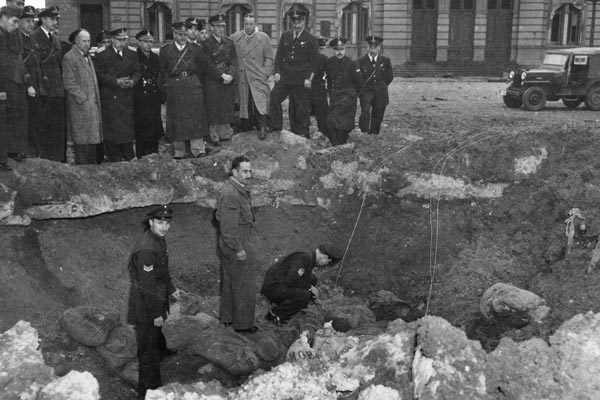 An earlier CJ-3B in the background of this photo may belong to the Air Force bomb disposal unit, or one of the officers observing the aftermath of the bombing of Plaza De Mayo in Buenos Aires on 16 June 1955. Judging from the number of onlookers, the danger from unexploded bombs has passed.

Over 300 civilians were reportedly killed in the attack by rebel naval aircraft, supposedly aimed at the nearby office of the President. (Wikipedia)

Thanks to Luis for the photo from Argentina's Archivo General de la Nació. 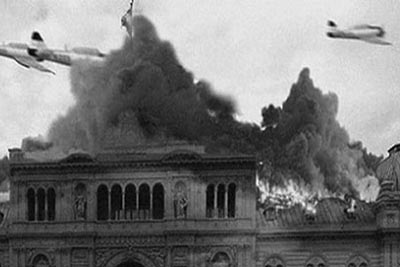 This photo shows bombs hitting Government House, known as "Casa Rosado", adjacent to the square. The attack was the opening of a failed coup d'etat against President Juan Perón.

The aircraft visible here are rebel Argentine Navy SNJ-4s, a variant of the North American Aviation T-6 "Texan." The T-6 was widely used around the world, primarily as a trainer. It was known by the U.S. Army as the AT-6, the U.S. Navy as the SNJ, and in British Commonwealth countries as the "Harvard." (Wikipedia) 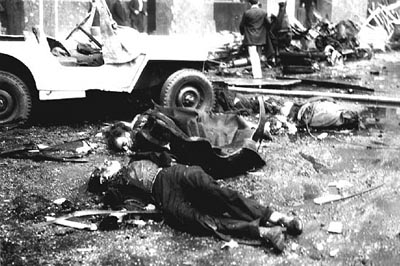 Bombs hit the crowded city center without warning on a Thursday afternoon, and the first bomb reportedly hit a trolley car packed with children. This photo of civilian casualties includes what appears to be a civilian CJ-2A.

The attempted coup was defeated by loyalist Army and Air Force units, but the Perón government was overthrown by a general revolt of the armed forces later in 1955. 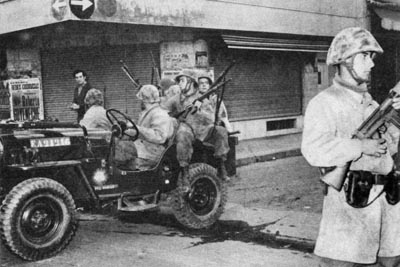 These are troops from the Parachute Infantry Regiment No. 2 in an Ejercito Argentino M606 Jeep, during a civil disturbance in the city of Cordoba in 1969. The "Cordobazo" was a protest movement of workers and students, who erected barricades (170K JPEG) and took control of much of the city of Cordoba on 29 May 1969, until the Army was called in. (Wikipedia) Although short-lived, the Cordobazo inspired further uprisings and has been called a turning point in Argentinian politics. 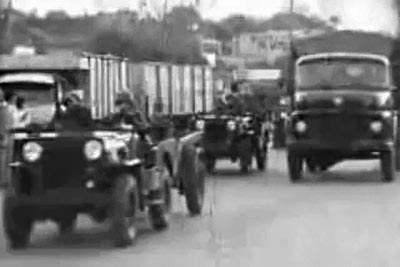 This picture is a frame from a piece of television news footage found by Luis, showing an Ejercito Argentino convoy entering Cordoba that day. (Luis also uploaded the video clip to You Tube.)

Luis catalogues the vehicles visible in the film clip: eight M606 Jeeps, one with a M100 trailer, a Dodge M601, a Willys Utility Wagon, and a Mercedes Benz 1114 truck.

The Parachute Infantry Regiment No. 2 was the unit to which Luis' 1966 M606 belonged. 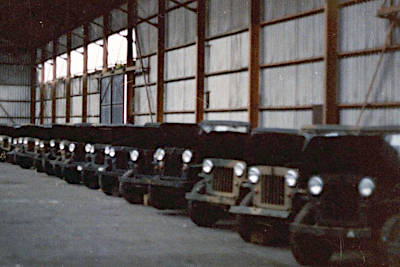 The Jeeps seen in action above, were retired from the Ejercito Argentino by the early 1990's, and Luis sent two photos probably taken in 1993 of army surplus M606 Jeeps up for auction. He says, "I think that this photograph will break the record of the most M606/CJ-3B ever seen in one place." And this is clearly an unretouched photo with at least 20 Jeeps visible (see the large copy, 120K JPEG). 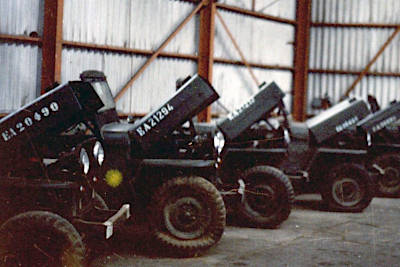 The second photo is interesting because several hood numbers are recognizable. Luis says, "It is not unreasonable to think that my Jeep could have been in this line of Jeeps." 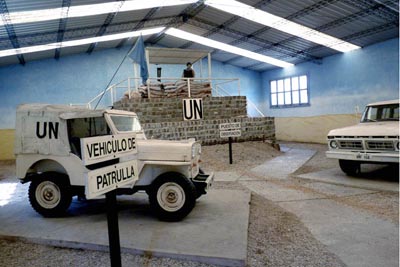 The Museo Histórico del Ejército Argentino ("Museum of the History of the Argentinian Army") in Ciudadela near Buenos Aires, includes a display devoted to Argentinian participation in United Nations peacekeeping over many years. One of the centerpieces is an M606 painted in UN white. 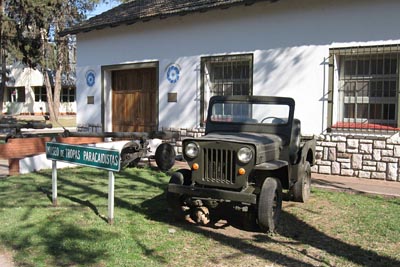 The Parachute Infantry Regiment No. 2 has a museum at their headquarters at La Calera in central Argentina, just outside Cordoba where the IKA factory was located. Greeting visitors to the museum is an M606 which is pretty well maintained, but stripped of most removable parts. Photo by Luis Mariano Paz. 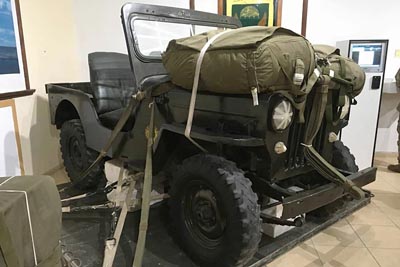 The Jeep outside pales in comparison to this unique exhibit inside the museum -- an M606 on a pallet ready for airdropping. Thanks to Sergio Willys for this photo. 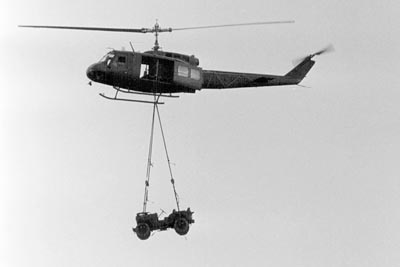 Another way of delivering a Jeep by air: a Bell UH-1 helicopter of the Ejército Argentino lifts an M606 in this undated archival photo courtesy of Luis Mariano Paz.


Thanks to Luis Mariano Paz, and the website Historia, Memoria, Identidad for the Cordobazo photos. -- Derek Redmond