Believe It or Not:
More Unusual Photos 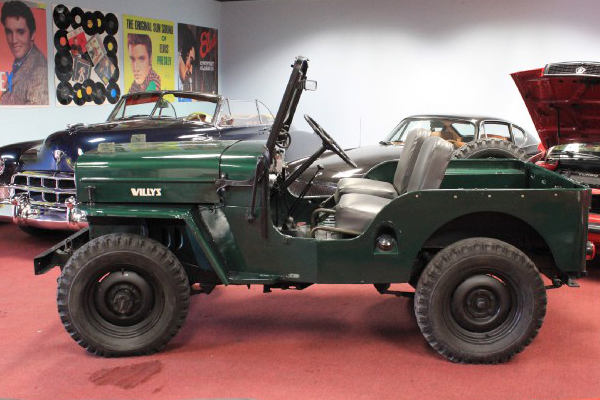 Not exactly a stunning restoration, but as of late 2020 it's nice to see a very early 3B being preserved for public viewing at the Miami Auto Museum. 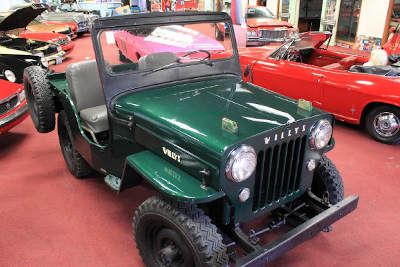 The museum, actually located in Orlando, has an amazing inventory of vehicles based around the Dezer Collection, and also supplies rentals for special events and the film industry. 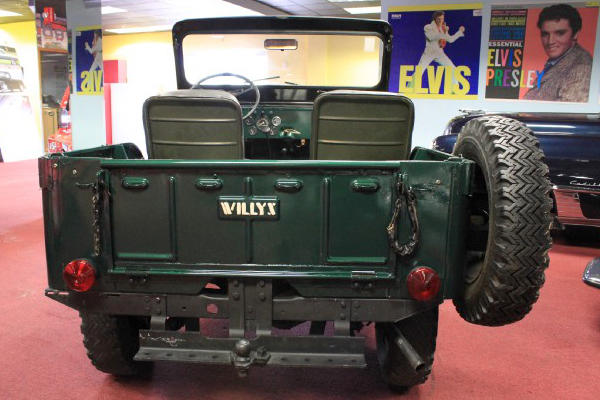 The 3B's interior (70K JPEG) is well worn and includes a GM heater, and the taillights are plastic, but it's a very presentable Jeep. Let's hope that one of these days I can add it to CJ-3Bs in the Movies.

Also nice to see Jeep fan Elvis Presley looking down from the wall of the museum. (See Elvis Presley's Jeeps on CJ3B.info.) 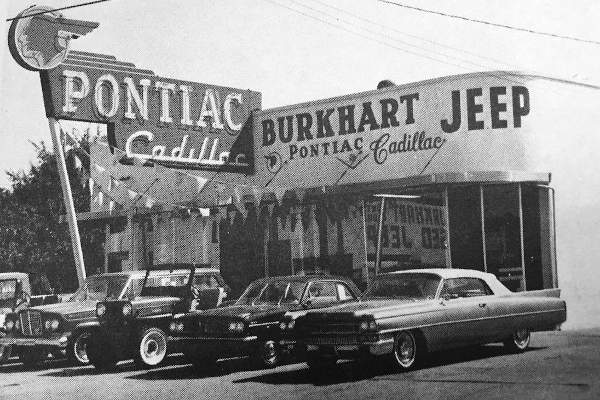 Burkhart Pontiac/Cadillac/Jeep in McMinnville, Oregon is seen here in a newspaper photo taken in 1963, judging from the '63 De Ville convertible and the '62 Pontiac. What's really cool is that in addition to the big cars and the brand new Jeep Wagoneer, they have a CJ-3B in whitewalls, front and center in their display.

Thanks to Marcel Martinetz for identifying this former dealership at 440 South Baker Street in McMinnville OR, as given by Cadillac Guy on Flickr. 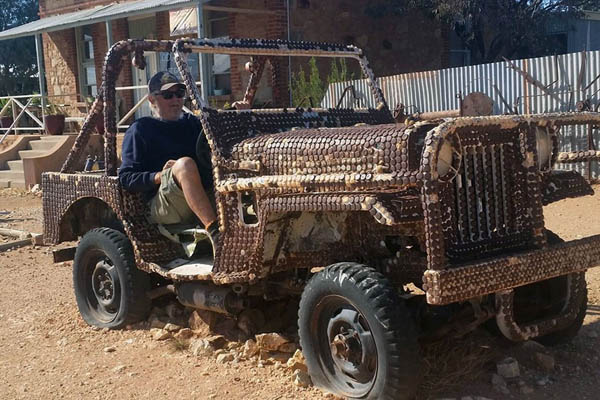 I have to assume that the bottle caps all over this Mahindra are beer caps, although I don't know for sure. This piece of art was photographed outside the famous Peter Browne Gallery at Silverton NSW, Australia. Brian Sweet is taking the wheel. Thanks to John Swane. 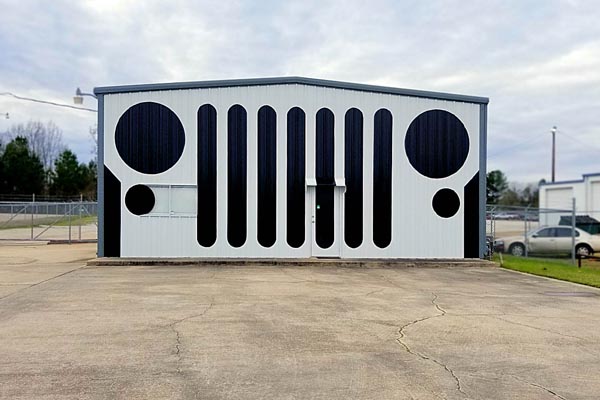 Well, Barry Ogletree announced on Facebook in January 2019 that he was thinking of doing it, and everybody said Go For It, so he did. A giant Jeep radiator guard painted on his new shop building in Lufkin, Texas.

I have to say it's clearly a CJ-3B grille, although I know that whenever I say that, there's going to be someone who disagrees. 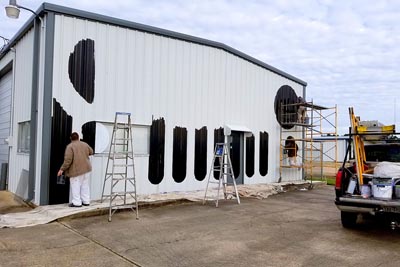 Barry's many Jeep projects include the CJ-3Bs Fred and Spud, and his new landmark garage is at 2107 N. John Reddit Drive in Lufkin.

First, the building's orange walls and huge truck-size garage doors had to be painted white (230K JPEG), and then the crew started to transfer Barry's design onto the walls. 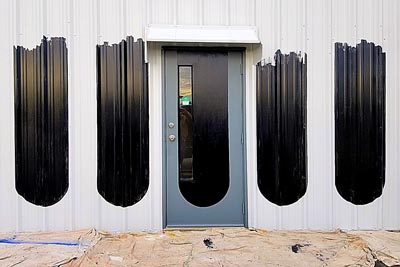 The details of this project were no doubt even harder than they looked, with the layout of the distinctive Jeep grille having to be coordinated with the ribs of the siding, and the location of the door and window. 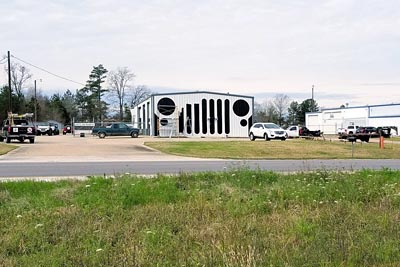 Barry says, "It has been fun. I am already getting reports of Jeepheads stopping for photos with their rides. Another friend called and said that he drove by, and two police were parked in front of the shop -- I guess doing photos also!"

See all the photos of the interior and exterior of the shop in Barry's Texas Flat Fenders photo albums. 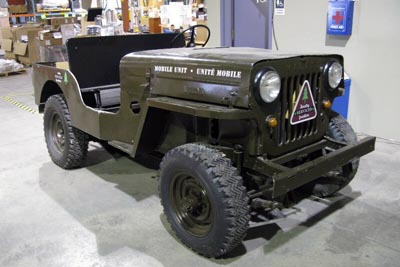 When this 1959 Willys CJ-3B appeared for auction on the Government of Canada Surplus website in June 2015, it generated some interest among CJ-3B fans who immediately wondered if it might be a former Canadian military Jeep. (We have seen some evidence of CJ-3Bs being used by the Royal Canadian Navy.)

The Jeep had been employed for more than two decades as an attraction for kids in a forestry exhibit at the Canada Science and Technology Museum, in Ottawa. The olive semi-gloss paint suggested it might have been military surplus previously, although the paint on the underside (100K JPEG) appeared to have been sprayed on for the indoor display. 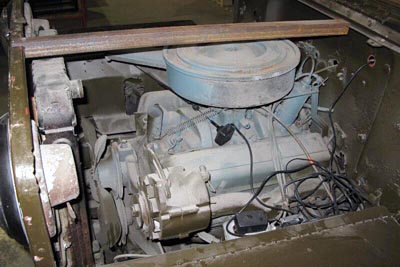 The V8 under the hood is a pretty good clue that this CJ-3B came from private hands rather than the military. The piece of steel channel replacing the radiator stay, may have been put there by the museum to support little kids climbing onto the hood.

The antenna and transformer visible here were part of the interactive radio display, which allowed children to talk to their friends via a receiver hung on the dashboard (100K JPEG) where the Jeep's serial number plate (57348 54167) has now been stuck with tape. 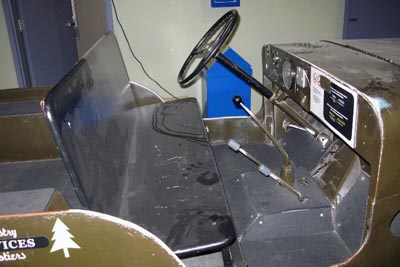 The lettering reads "Forestry Services, Mobile Unit" in English and French. The Jeep has been extensively modified, including the tailgate removed (100K JPEG), probably to allow kids to climb in easily. According to the web listing, the gas tank, distributor, transmission, battery and possibly other parts are missing, and wiring has been cut. Nice set of MDG Sno-Charger G78-15 tires, although the left rear is flat. Minimum bid was set at $1,000 Canadian.

As of this writing, the Canada Science and Technology Museum is closed for renovations, with re-opening scheduled for 2017. Looks like this old Jeep won't be part of the new museum; but I hope it won't be replaced by a video on a computer screen.

Thanks to Hanno Spoelstra and the Maple Leaf Up forum for spotting the auction.

A Toast to a Really Grape Vehicle 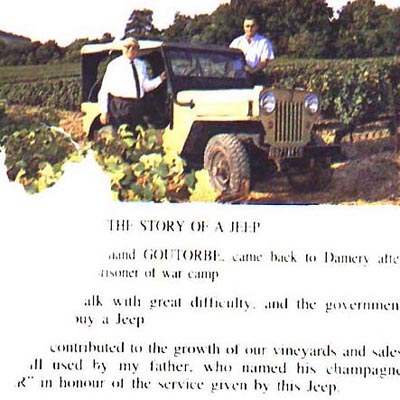 This photo of Armand Goutorbe and his beloved CJ-3B appeared on the back of a 1990's bottle (10K JPEG) of an award-winning French champagne called Jeeper.

Peter Pearson found the label and explained the story behind it: "Armand Goutorbe had a vineyard in France before World War II. During the war he was a hero, but he was injured badly and after the war could not get around his vineyard any more.

"Faced with ruin, he approached the French government and asked for a Jeep, as it was the only vehicle that could do the work and ferry him around. At the time all Jeeps were for the military -- no civilian use was allowed -- but in his case, as he was a hero, the government let him have a Jeep."

"In honour of the war surplus Jeep, which was later replaced by a new CJ-3B, he named his first post-war champagne Jeeper Champagne. It is still made and is excellent stuff."

The vineyards of Jeeper Champagne are in the L'Ardre River valley, just west of Reims, France. The brand has retained the Jeeper name, but has expanded and now produces a number of varieties, including the Cuvée Grande Réserve Chardonnay seen here. Unfortunately the picture of Armand and his CJ-3B no longer appears on the back of the distinctive new Jeeper bottle.

Note: As of early 2019 the champagne is still sold only in Europe; I picked some up on my 2016 visit to France, but haven't opened it yet. -- Derek 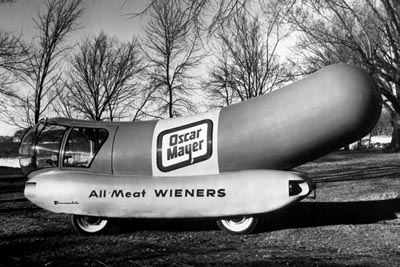 The first Oscar-Mayer Wienermobile was built in Chicago in 1936, and the newest versions continue to tour the world today. The 1958 version, the first built out of fiberglass, might be of some interest to Jeep fans. According to a "History of the Wienermobile" from Oscar Mayer, "In 1958, a futuristic, bubble-nosed Wienermobile, designed by the late Brooks Stevens of 'Excalibur' fame, added buns for the first time. This was one of the smallest and most unique, as it was built on a Willys Jeep chassis. Stevens' design had a tremendous impact on the Wienermobile. Its influence is visible in the next three generations of vehicles."

Photo from the NY Daily News. 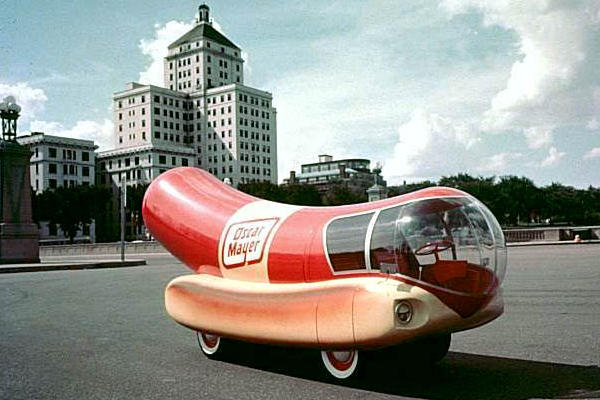 Brooks Stevens had designed the FC-150 Forward Control Jeep on a CJ-5 chassis two years earlier, and he used an FC-150 for this project. He did succeed in sinking the wiener into the bun better than subsequent versions of the vehicle, which tend to have it sitting on top. 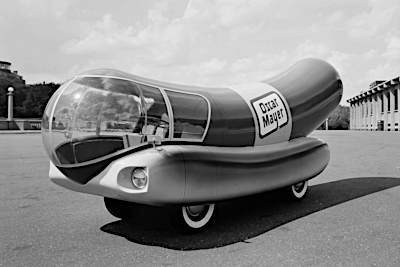 Stevens appears to have enjoyed the project; according to Glenn Adamson's book Industrial Strength Design, Stevens himself commented, "There's nothing more aerodynamic than a wiener."

See also a photo of the fiberglass body being fabricated at Gisholt Machine Co. of Madison WI, in The Dispatcher magazine, Winter 2019-20. 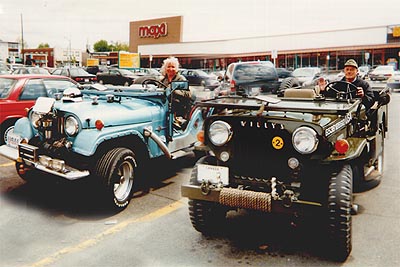 Alex Houle sent this photo he took on Victoria Day (24 May) 2000, in Dorval, Quebec, a suburb of Montreal. Alex says, "I have known these people for several years and have been to their home several times to talk Jeeps. They live in Lachine and are famous for these Jeeps. The late-50's CJ-5 is hers, and his is the mid-50's 3B. They have owned the CJ-5 since new, and she uses it as her daily driver. It is quite a common site to see her driving around with the Jeep full of kids. As you can see, when they go out they both go in separate Jeeps. On Victoria Day I happened to pull into the mall and I had my camera with me, so they graciously let me take some photos of them." 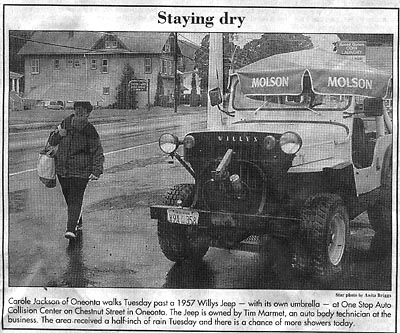 Bart McNeil writes, "I've never seen a CJ-3B on the front page of a newspaper, so when I saw this in the Oneonta Daily Star on 14 June 2000, I thought I would send you the picture. The day it was taken I actually saw this modified '57 CJ-3B as I drove through Oneonta NY. I dutifully pulled over and examined it. It appeared that the entire tub had been replaced, with the exception of the grille. There were tool indents on the passenger side and the only "WILLYS" stamping was on the grill. The craftsmanship was very good as the owner, Tim Marmel, is an auto-body man.

"The reason for the large Molson umbrella is that the cargo area was full of sound equipment (speakers, etc.) It had a nice Harrison heater under the dashboard. He had removed the headlights and parking lights and covered over the holes. It was certainly more modified than I was interested in, but it was nice to see someone put a lot of care into their CJ-3B. As I left it started to rain and this photo was taken shortly thereafter. As usual I didn't have my camera with me." 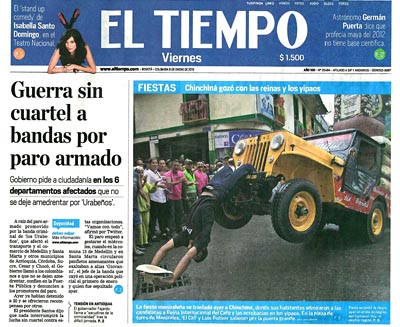 This photo from Bogotá's El Tiempo of 6 January 2012 shows acrobatics at the "yipao" festival in Chinchiná, Colombia. Yipaos are held annually in many towns in the coffee-growing area of Colombia -- see more photos in Jeeps in Colombia on CJ3B.info. See also a Diecast Toy Willys CJ-3B sold in 2013 by El Tiempo.

Thanks to Sebastian Lobo-Guerrero for sending the clipping.