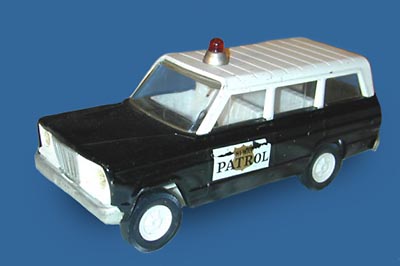 Probably the oldest: this "Hi-Way Patrol" wagon is from the Mini-Tonka series of Jeep trucks and station wagons, introduced in 1963 (see Mini-Tonka Does the Full-Size-Jeep). This version first appeared in the 1965 Tonka catalogue. 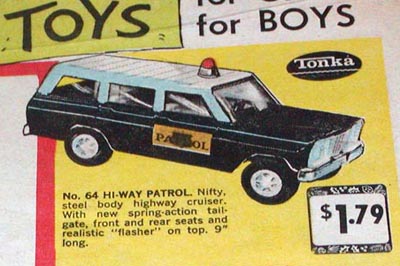 This 1967 advertisement was saved by Butch Cudahy from the Milwaukee Journal, showing a price of $1.79. 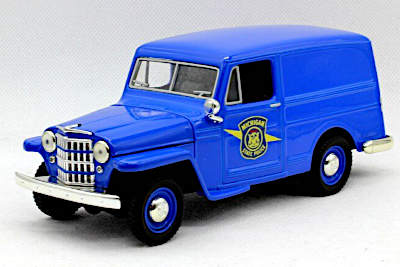 I guess the Willys Jeep Station Wagon can be squeezed in on this page, since although it was a popular police vehicle back in the day, there aren't a lot of toy versions around.

One of the many versions of the Liberty Classics 1/25-scale Willys Panel Delivery coin bank made by Spec Cast is this Michigan State Police vehicle, apparently a paddy wagon. The rear doors open to reveal the slot for inserting coins. 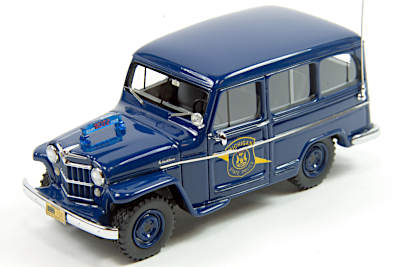 More finely detailed than the Liberty Classics bank, despite being in the smaller 1/43 scale, is this NEO model, circa 2017. It includes the distinctive Michigan light-up "STOP" sign on the hood. The paint color is also closer to the real Michigan State Police blue. But this kind of detail comes at a price, which in this case is around US$80. 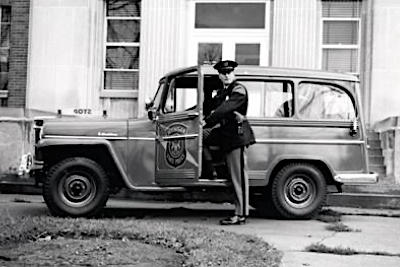 This archival photo doesn't confirm the correct shade of blue, but it does confirm the details of the NEO model.

Majorette, a French company now merged with Solido, released a few "Sheriff" versions of their 1/60 scale XJ Cherokee #224. They all include a light bar, opening back hatch, and Sheriff tampos. One variation came as a "Mini-Base" set (30K JPEG) with a few accessories.

See also Derek's photos of the Majorette Sheriff XJ's at a rollover (30K JPEG) and a bridge accident (50K JPEG). 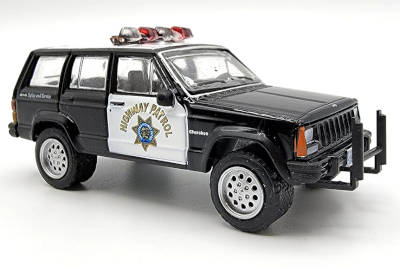 It's been hard to keep up with all the Jeeps released by GreenLight Collectibles since 2011. In addition to all the Wranglers, CJs and even DJs, they added an XJ casting in 2021, which appeared first in their "Hot Pursuit" Series 38 (50K JPEG). This California Highway Patrol Cherokee is pretty accurate to the 1993 prototype, down to the correct wheels and push bars. 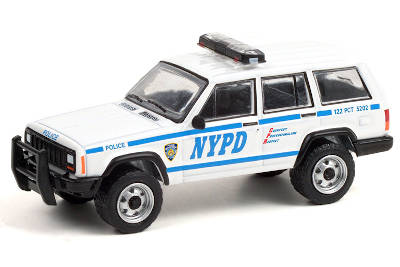 Also in Series 38 is this NYPD XJ, a vehicle that was used in New York for many years, particularly by K9, mounted and park units. This one is described as a 1997, and GreenLight has actually given it the correct front end for the 1997-2001 models. Unfortunately they didn't include the red flashers in the front grille which many of the NYPD Cherokees had. 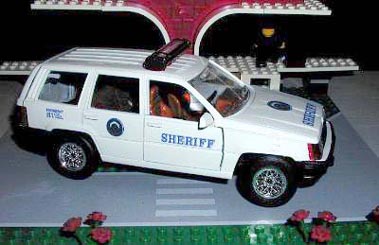 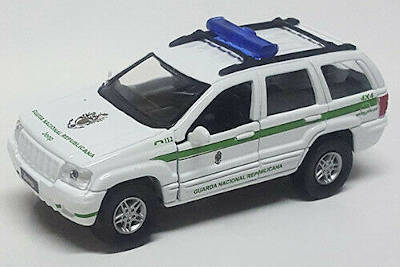 This is a nice China-made small diecast ZJ in the old NYPD blue livery. 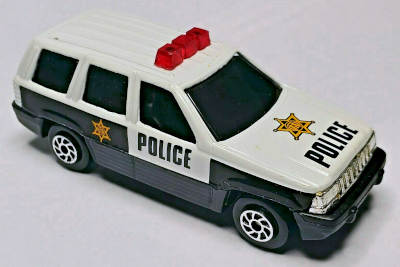 Yatming model 827 is also a 1/64 diecast. It comes in this generic U.S. livery and a popular green and silver German Polizei version (50K JPEG). 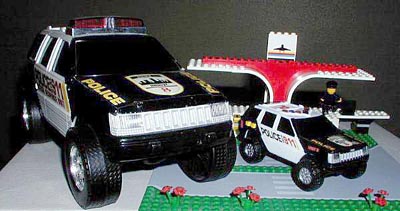 Road Champs, over the years, has also had many 1/43 ZJ Grand Cherokees, including a number of Police (or Special Police) releases. These two Special Police releases are the Park Ranger and the SWAT Team.

At the smallest end of the size range is the HO (1/87) scale Herpa ZJ, available in several emergency service paint schemes including this police version. 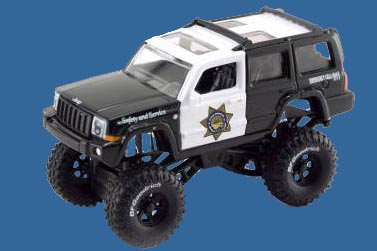 A 2006 Jeep Commander makes an appearance as a Sherrif's Patrol monster truck in "High Profile" model no. 12038, a 1/64 diecast made by Jada Toys in California. The model is also available as a Border Patrol vehicle (30K JPEG). 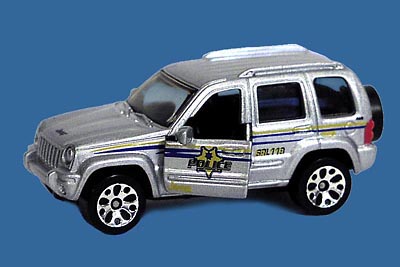 New to Matchbox in 2001 was a small diecast model of DaimlerChrysler's newest Jeep, known as the new Cherokee overseas, but labelled in North America as the Liberty. Early 2002 saw a police version quickly created for the Mega Heroes 10-pack (140K JPEG) of emergency vehicles. It carries a Sheriff's star and no lightbar.

Thanks to the late Mike Albright for providing lots of the photos and info for this page, and Butch Cudahy for the Tonka newspaper ad. -- Derek Redmond