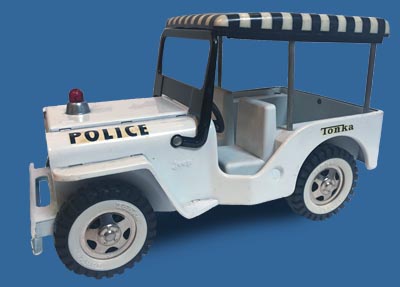 The 10" long Tonka No. 325 Police Jeep first appeared in early 1965 with the original Tonka body style and a black & white striped version of the hard plastic Surrey top, mounted on steel posts. But for some reason this Tonka didn't gain the popularity of the Jeep wrecker, the Army "Commander", or even the Air Force Jeep. 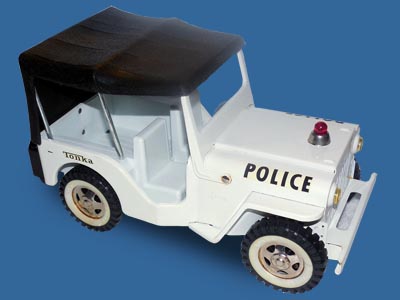 When Tonka dropped the Surrey, the Police Jeep also lost its striped top. In the later 1965 and 1966 editions of the Tonka catalogue, the same model is shown, but with the improved body style and a molded plastic all-black "canvas" top. The Police Jeep was discontinued after 1966, so it's harder to find than some of the other Tonkas today. 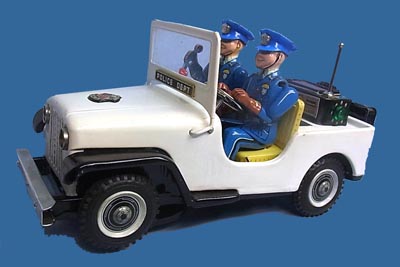 Although the Jeep is mostly plain white, the two figures (160K JPEG) are a great example of the detailed lithography found on some late tinplate. One cop moves his arms with the steering wheel, and the other one raises the radio handset when the battery-powered Jeep stops moving. 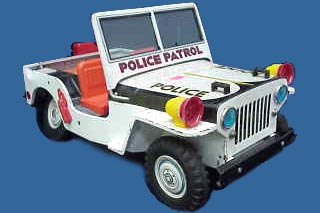 This smaller tin and plastic "Police Patrol" unit is from an unknown manufacturer. See a photo of the detailed dashboard (15K JPEG). 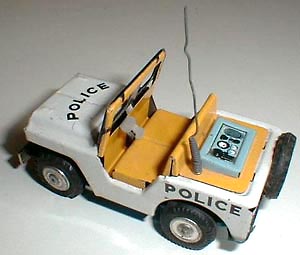 Ken Dickerson found a police version of this basic "Made in Japan" Jeep, which explains the reason for the short, stubby radio aerial many of us have seen in the rear of this toy. Apparently it was intended to hold a twisted wire antenna, rarely seen on the surviving copies of the toy. Ken also notes that the radio itself is reversed in comparison to the more-commonly-seen olive drab version of the Jeep. 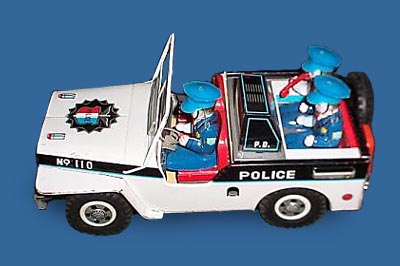 This Police command Jeep, with communications console in the rear seat, was made in Japan by Daiya. It's another good example of the intricate detailing on some of the Japanese lithographed toys. The figures are tin with plastic hats. See also a rear view photo (30K JPEG). 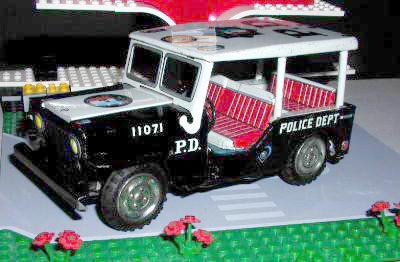 This photo was sent by Mike Albright, along with the photos of his collection of newer Police Cherokees and CJ's. Mike says, "This may just get me started collecting tin. This is a great Jeep! It is an older "Made in Japan" tin friction motor Jeep. It is approximately 7 in. long (17.5 cm), and has lots of detailed litho work. The tires are rubber. Thanks to Bill for the Jeep!" See also a front view photo (52K JPEG). 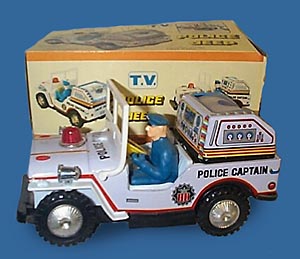 The battery-powered "T.V. Police Jeep" made in Taiwan by Kuang Hui, is larger (9 in. long) and has an even more elaborate rear console which includes a lighted "TV screen". The screen displays changing pictures, and the toy also makes a siren sound. (This vehicle may not be an exact replica of an actual prototype...) 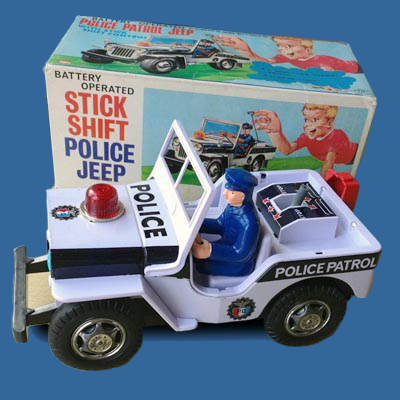 Another battery-operated tinplate and plastic toy is this "Police Patrol" Jeep by made by T.N. in Japan. Nine inches long, it has a tin body with plastic base, interior, driver and blinker light. Forward, reverse and turning is controlled by the switch in the rear. 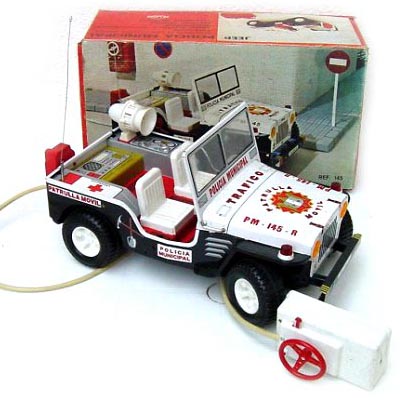 This mint item from 1974 is in the collection of Juan Manuel Yeste Cortes. Manufactured in Spain by Rico, the 400mm (16 in.) metal toy has full-function remote control including electric siren. 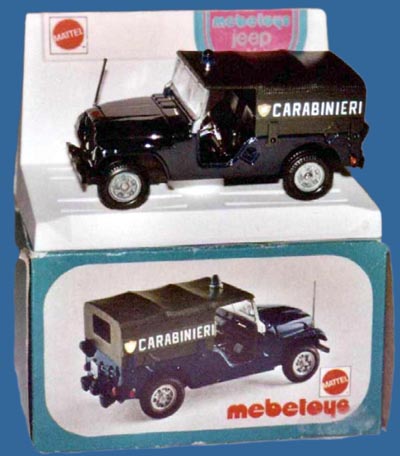 Meanwhile the Carabinieri (Italian police) are represented by this 1970's 1/43-scale diecast from Mebetoys in Italy, which had been bought by Mattel in 1969 Mebetoys also made an olive drab "Public Security" version and a fire service version.

When Corgi was considering a series of diecast police models in 2001, some people were hoping to persuade the company to include a Mahindra CJ-3B which served as a Highway Patrol vehicle (30K JPEG) for the West Bengal Police in India. 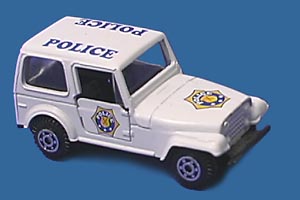 Perhaps a standout among the China-made dollar-store diecasts, is this casting with hardtop, opening doors and detailed plastic base (and hatched grille...)

This December 2004 release is part of a series of police models from Hachette in France. The model is produced by Norev and distributed by Hachette. See also a rear view photo (60K JPEG), and a photo of the packaging (50K JPEG) which is a replica of an older Norev box. 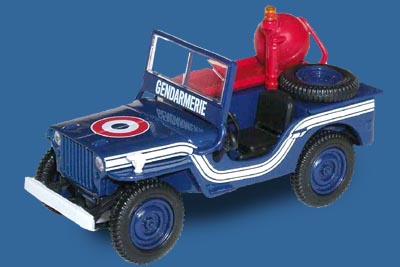 Their announcement in French of this release translates as follows: "Like many police and security forces around the world, the Gendarmerie of France use Jeeps for certain functions. The Willys MB and Ford GPW models are used, and particularly the M201 version built by Hotchkiss in France. This 1/43 scale metal and plastic model represents an example employed by the Gendarmerie at helicopter bases, equipped with a fire extinguisher for fast emergency response." 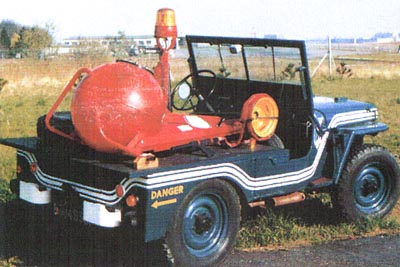 The model also comes with a booklet (50K JPEG) including articles on Willys history and Jeeps in police work, and some photos of the prototype, a Willys MB which was apparently modified in the 1970's with a large dry powder extinguisher, and in service into the early 1990's. See a prototype front view (90K JPEG). Photos courtesy Laboratoire central de la gendarmerie nationale. 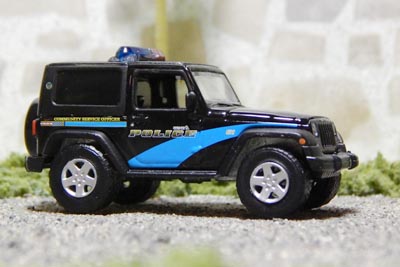 Since 2012, GreenLight Collectibles has been perhaps the most active diecast manufacturer in terms of Jeeps. They also have a popular Hot Pursuit line of 1:64 police cars, and the two interests came together in this JK from Hot Pursit Series 15, based on an actual prototype in Geneva, Illinois.

As originally shown in photos of Hot Pursuit Series 15 (250K JPEG) the model had no lightbar, but GreenLight's typical precision came through in the end with the correct blue and red plastic detail. Thanks to Swifty's Garage for this photo. 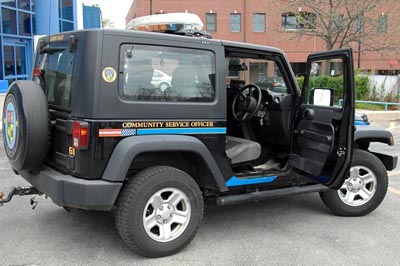 The one detail of the Geneva Police Wrangler that GreenLight missed, was the fact that the prototype Jeep is right-hand drive, to make parking enforcement easier! 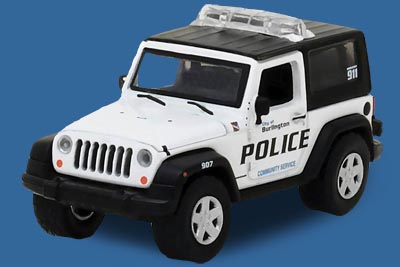 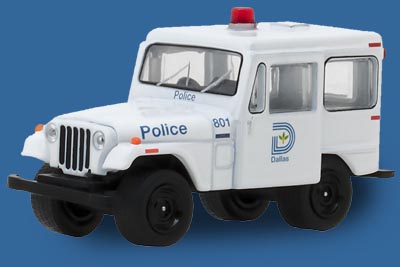 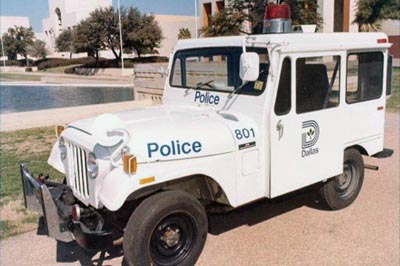 The DJ-5-series postal Jeeps were not as popular with police forces as the earlier DJ-3A (see Police Service Jeeps on CJ3B.info.) However, as usual GreenLight has based their model on a prototype photo; the Dallas Police Jeep is a 1977 DJ-5F. 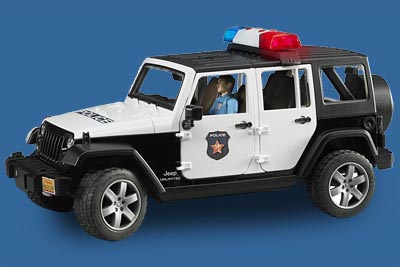 Looking for a Jeep toy for a child or grandchild? In a much larger 1/16 scale (and also a higher price range at about US$50) this JK Unlimited is one of the increasingly rare toys manufactured by a family firm. It's from Bruder Toys in Germany, whose plastic toys are known for combining realism and durability. The Jeep has opening doors and removable roof, and comes with an articulated figure. 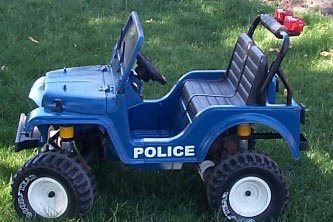 A really big one: this police version of a Power Wheels ride-on toy was custom-built by Rich Amore in Roseville, Michigan. Rich describes the project: "When I changed it to the Police Jeep, I added working flashing lights, a working siren, a 2" lift kit, and replaced the stock electrical system to accomodate a motorcycle battery." See his previous camo version (30K JPEG). 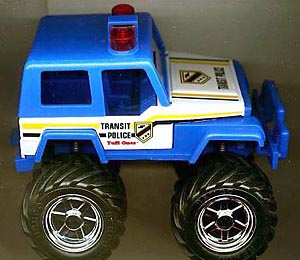 This Tuff Ones plastic Transit Police Jeep has a similar look (but it's a lot smaller.)

Here's a collection of small diecast Police Jeeps in approximately 1:54 scale, made in China.

See a larger photo of the Road Champs Coyote Sheriff CJ (20K JPEG) seen in the center of the photo. 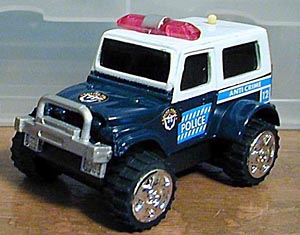 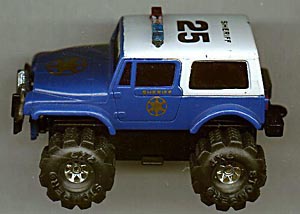 Similar in design is the Stomper Sheriff CJ (right). 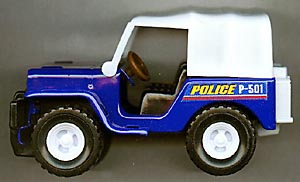 This is a Road Steel Jeep, a newer China-made clone of the Japanese Buddy L tin Jeep.