Building on the immediate success of the Tonka Toy Jeep in 1962, the Mini-Tonka Jeeps were introduced in 1963. Roughly 1:22 scale, about two-thirds the scale of the original Tonka Jeep, the Mini-Tonkas included a series of models based on the Gladiator trucks and Wagoneer station wagons now known as the "Full Size Jeeps". The toy designers in Mound, Minnesota must have worked quickly on this line, and probably had some advance information from Kaiser Jeep, since the prototype Gladiator and Wagoneer had only been introduced in November 1962. 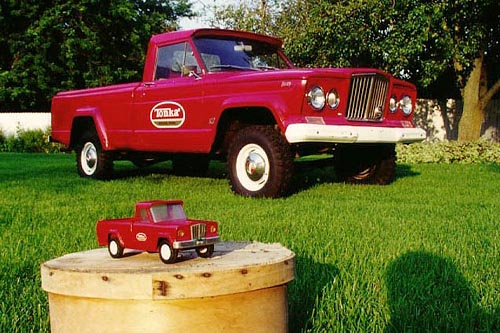 Frank Sanborn of Charlotte, Michigan has a matched set of Tonka and Kaiser J200 Gladiators. "The Tonka logos are magnetic and are easily taken on and off. I get grins and thumbs up from people who remember (like me) playing with the little Jeep trucks as a kid. Both trucks must be about the same vintage (the big one's a '65)." 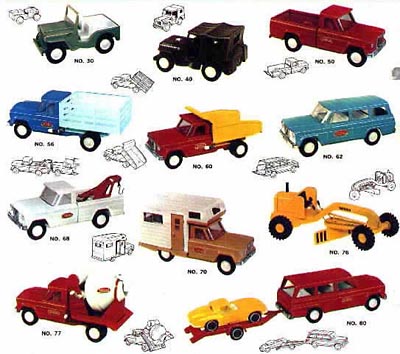 The Tonka pickup truck is based on the Kaiser "Styleside", and did not appear in the "Thriftside" version with narrower box and external rear fenders. But just like the Kaiser prototype (and perhaps even more so) the Mini-Tonkas were available in a variety of other body styles.

As of 2002, Frank Sanborn says that in his collection, "I currently have a dozen or so Gladiator toys (50K JPEG) and am trying to get every configuration in every color combo." 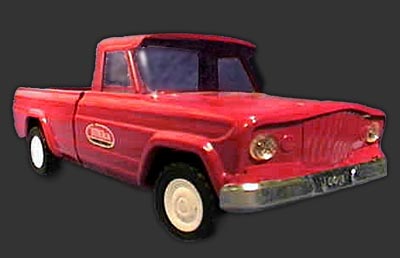 Apparently Tonka soon realized that in their haste to release the Jeep trucks, they had missed one opportunity to make the toys' appearance more realistic. The front grille on the 1963 models was stamped as part of the body -- the most commonly found example is this red #50 Gladiator pickup. In subsequent years a more convincing chrome grille was mounted as part of the front bumper (as on Frank's Tonka, above). 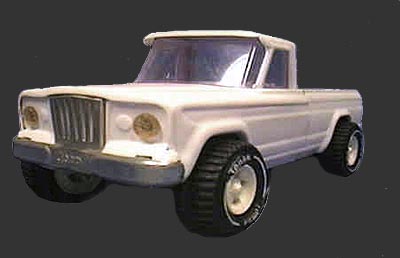 New FSJ variations and colors appeared, including fire vehicles (see Toy Jeep Fire Trucks) and a set with a horse trailer. Other later changes included the removal of the Tonka decal from the doors, and a gradual changeover to larger wheels. 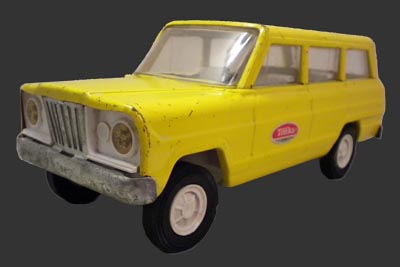 Despite their smaller size, the Mini-Tonka Jeep trucks were more accurate than the original Tonka Universal Jeeps, in regard to prototype proportions and details. And they were produced well into the 1970's. 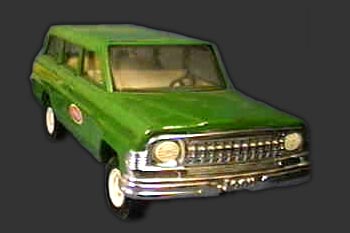 Jeff Nelson points out that it was not until the mid-1970's that Tonka replaced the small center grille on the Wagoneers (correct for 1963-65) with a grille matching the 1974-78 prototypes. This Wagoneer was also produced in an extended-headroom ambulance version (35K JPEG). 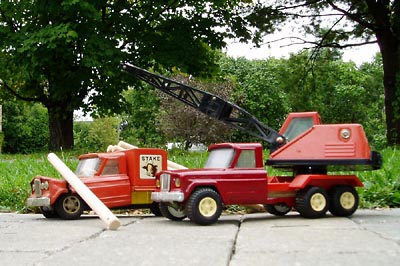 Andy Cameron took this photo of an accident involving a couple of the trucks in his collection. His comment: "Here's what happens when the cable on my Mini-Tonka crane isn't as strong as gravity!" The crane is perhaps a custom variation that somebody kitbashed. The other trucks is actually a Tonka knockoff by another firm, likely in Japan, who did imitations of several of the Mini-Tonkas. Note the metal headlights.

See the Japanese wrecker, the cement mixer, and the dump truck (40K JPEGs) from Bob Keniston's collection. The toys have front-axle friction drive.