Chrysler's XJ Cherokee Police Package, introduced in 1992, was the most successful Jeep ever, in terms of sales to police departments. Featuring a bare-bones interior and some mechanical upgrades, it also initially offered a steering column-mounted automatic transmission gearshift, to make room for police equipment in the center console. 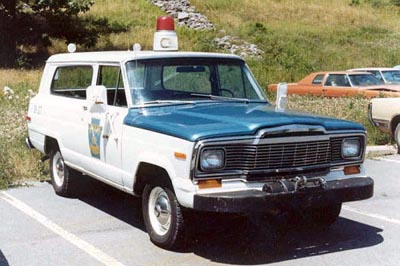 There were some police fleets that were ahead of the curve, and bought the earlier "Full Size Jeep" Cherokees. This example, photographed in 1983, is a late-70's SJ belonging to the Pennsylvania State Police. 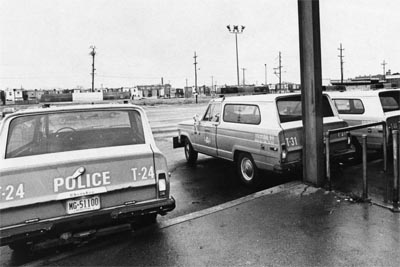 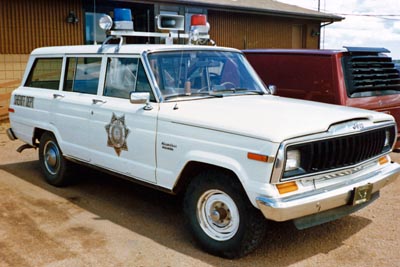 This early-80's SJ was used by the Sheriff in Teller County, Colorado. The county is in the mountains west of Colorado Springs, near Pike's Peak, so the Jeep was probably a useful vehicle year-round. The county seat is the famous Cripple Creek, and Teller County was also the site of the infamous Colorado Labor Wars of 1903-04.

Thanks to Juhani Sierla for the photo. 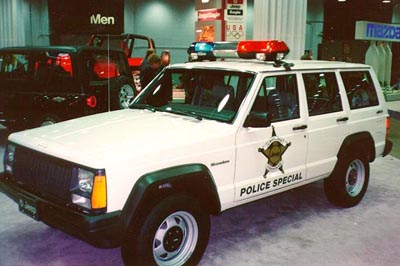 The AHB Police Special Package was the inspiration for the 1:60 diecast Sheriff Jeeps from Majorette. It featured suspension and electrical upgrades to the Jeep Cherokee, and the top speed limiter removed to allow the 4.0L inline 6-cylinder engine to make use of the 120MPH speedometer.

The early Chrysler demo seen here was photographed at an auto show. 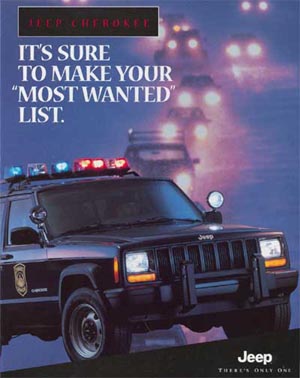 The AHB package was introduced on the XJ in 1992, and Chrysler's advertising announced that "The Bloodhound Just Became Obsolete" (170K JPEG).

A later slogan is seen in a trade-magazine advertisement here. The photo in this ad was Photoshopped differently for the cover of a Cherokee Police Special Service Package brochure (50K JPEG.)

Available in 2-door or 4-door, and 2WD or 4WD, the package included gas shocks, thicker sway bars, anti-lock brakes, steering column shift automatic transmission, and transmission cooler. It became a very successful fleet vehicle, although some police departments preferred to buy more basic Cherokees and equip them to their own specs. The package was also purchased on some Cherokees in the Fire Service. The column shift was apparently discontinued after 1997. 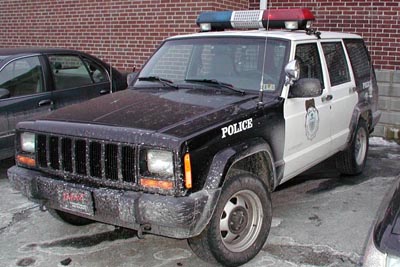 An XJ set up as a sportier D.A.R.E. vehicle (60K JPEG) was photographed in a parade in Peru, Indiana. 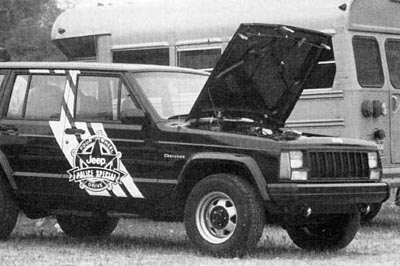 Dodge, Plymouth & Chrysler Police Cars 1979-1994 by Edwin J. Sanow and John L. Bellah with Galen Govier (1996, Motorbooks International) tells the interesting story of the 1992 debut of the Cherokee police package in the standardized tests of squad cars by the Michigan State Police. In acceleration, braking and on a road course, the AHB Cherokee (left) amazed many cops by equalling or outperforming popular V8-powered squad cars such as the Crown Victoria and Caprice. 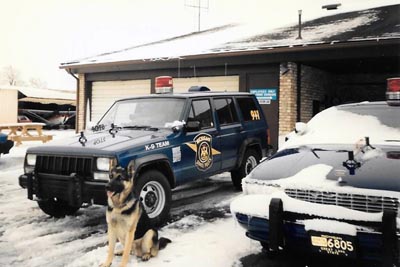 The Cherokee returned to the MSP tests the following year, and performed even better. It also faced competition from another 4x4 vehicle there for the first time in 1993, and blew away the Ford Explorer.

XJ's put into service by the MSP included this K-9 unit. Thanks to Scenes From A State Called Michigan for the photo taken at Ionia. 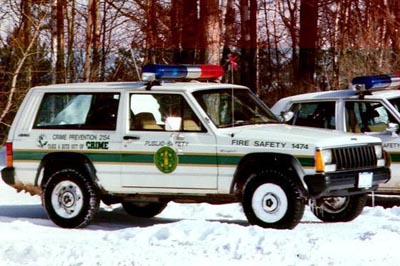 The kind of performance and ergonomics demonstrated in the Michigan tests led many other police forces to order the Cherokee as well. But northern and rural areas also found a 4x4 squad vehicle valuable for dealing with rough terrain and winter weather. Northern Michigan University Public Safety was way ahead of the AHB package when they bought this 1987 Jeep. 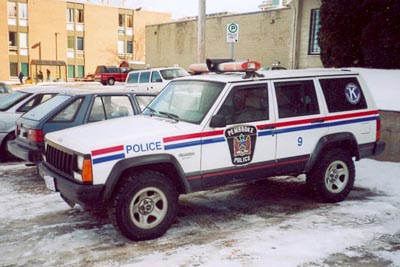 Of course Canadian departments had lots of XJ's in service in the 90's and early 2000's. Pembroke, Ontario had an XJ in red and blue stripes in 2003. 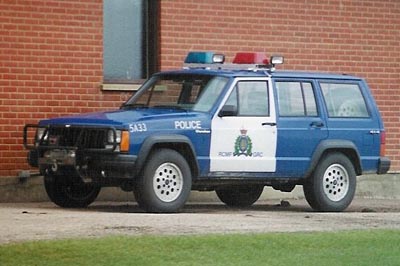 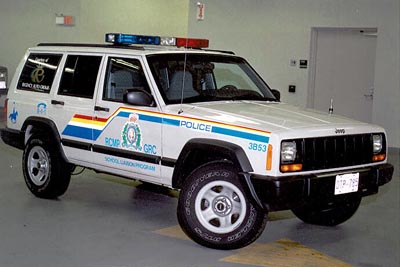 A post-1997 Cherokee in the newer RCMP paint scheme was probably chosen more for its cool factor than its all-weather capability, since it was assigned to the "School Liaison Program." Thanks to Christopher Wytrwal for his 2005 photo. 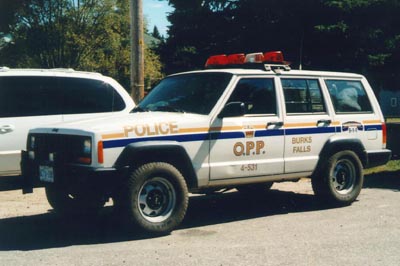 Seen on the road in Ontario in 2001 was this Ontario Provincial Police XJ complete with front bumperettes. Photo by Jarek Skonieczny. 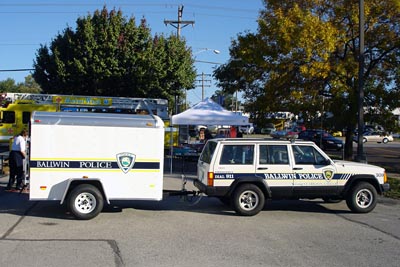 Ballwin, Missouri is on the west side of St. Louis, and has been selected more than once as one of America's 100 Safest Cities. The Ballwin Police took advantage of an XJ for its towing capacity (5,000 pounds with a transmission cooler.) 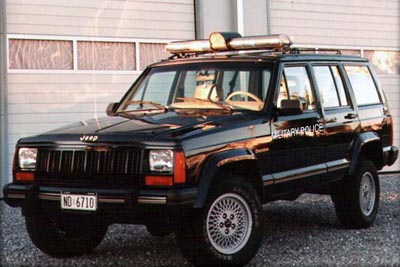 This black Military Police Cherokee was for sale in Germany in early 2007. Identified as U.S. Army surplus, it was complete with blue light bar and siren, and a warning in German that "The use of special signals on public roads requires official permission."

And a police Cherokee in China (60K JPEG) is a Beijing Jeep product. 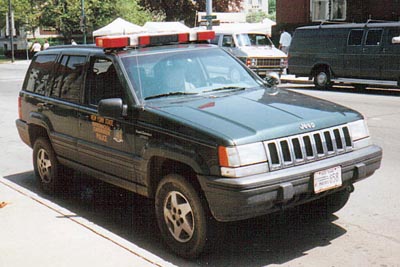 Grand Cherokees were probably considered a bit rich for most police budgets, when compared to XJ's in the 1990's, so there were never a lot of ZJ's in service. Thanks to the National Police Car Archives for this photo of a 1995 Grand with the New York State Department of Environmental Conservation Police.

And a ZJ was spotted playing a patrol vehicle in the TV series Caitlin's Way (70K JPEG). 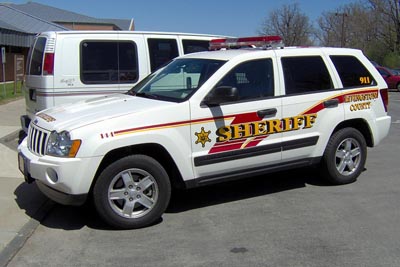 As police budgets grew, and the Grand Cherokee was no longer in competition with the venerable XJ, it became more common to see the WJ used by first responders. This nice 2005 WJ belonged to the Livingston County Sheriff in New York state. Photo by Samuel Smith, courtesy of policecararchives.org. 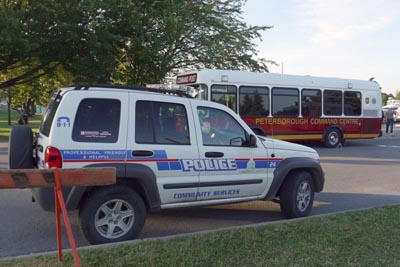 By 2007 the Liberty had also become very popular in police and security applications requiring all-season on-road dependability. This KJ was photographed in Peterborough, Ontario in 2011. In the background is the Peterborough Command Post.

Thanks to Mike Albright for his help with photos and info. -- Derek Redmond