Here's a small sample of the many toys that have been produced in Asia representing Jeep prototypes built by Mitsubishi in Japan, and Mahindra & Mahindra in India. 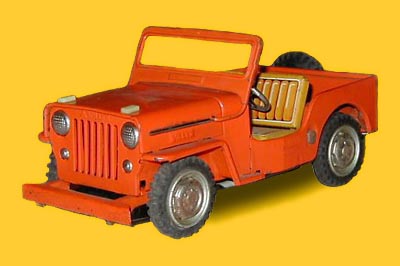 This Bandai tinplate CJ3B-J3 is a notch more realistic than many older Japanese Tinplate Jeep Toys. The Mitsubishi Willys stamping on the grille can be seen in a larger version of the photo (30K JPEG). See also a rear view photo (30K JPEG). Thanks to Yona Ken for the photos. 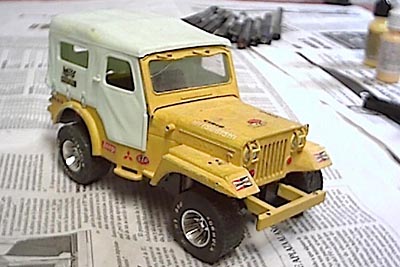 Roberto Flores in Spain built this 1/20-scale electric motorized kit by Aoshima, and painted it in the yellow which is certainly one of the most popular colors for Jeeps in Japan (as well as the EBRO Jeeps in Spain). The prototype for this older kit was a J58. 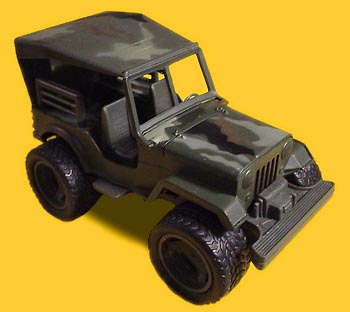 There have been a few diecast or plastic toys made in China which appear to be based on Mitsubishi Jeep protoypes. This example was sold in Europe in 2002, with no identifying marks beyond a paper sticker on the base identifying the maker as "Kandy Toys." It's about 1:25 scale, with a diecast metal body on a plastic base with plastic top attached. It has pullback drive, and travels a surprisingly long distance on its oversize rubber tires. Thanks to Peter Pearson for finding this one.

This Japanese toy, model no. 31 made by Grip Zechin, is based on the Mitsubishi J52 variation of the CJ-3B. It's diecast metal, with plastic windshield, seats, and detailed undercarriage.

The Grip Zechin toy is about three inches (75 cm) long overall, and has a nice level of detail. See also a rear view and a side view with the windshield down (20K JPEGs).

Model no. 33 is an Japanese military version (33K JPEG) with a recoilless rifle. 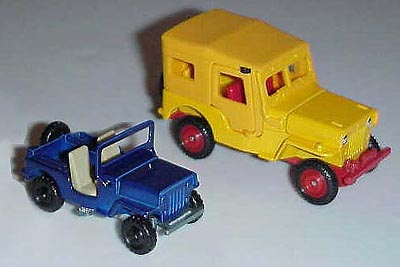 Tomica in Japan has produced a number of models based on Mitsubishi Jeep prototypes. Both of the models in this photo by Brian Willoughby are of Mitsubishi's first Jeep, the J3R, a right-hand-drive CJ-3B. 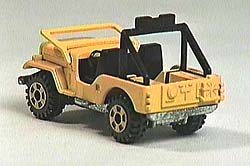 Tomica replaced the #25-A with #25-B, a 1/57 casting of the Mitsubishi J58, with its characteristic dog-eared front fenders. Obviously yellow was a popular colour for Mitsubishi Jeeps -- this one with with matching yellow wheels was sold in North America in the "Tomy Pocket Cars" series. See also a front view (20K JPEG) showing the Mitsubishi logo above the grille, and the Tomy Pocket Cars package (20K JPEG), designed to look like a blue jeans pocket.

The J58 model has been produced in a number of colours and variations, including no roll bar (20K JPEG). 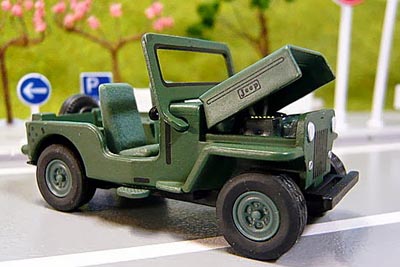 Left-hand drive models were made withthe North American market in mind, and the "domestic" (i.e.home-market Japanese models) have right-hand drive.

This 1/55 diecast J3R is #0094 from the Tomica Limited series. Produced in 1971, it has remarkable detail including engine. This photo and a rear view (30K JPEG) are from CLK's Model Car Collection in Hong Kong.

A Bit of a Mystery 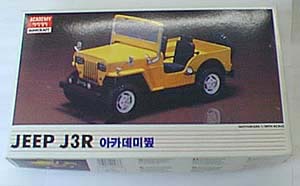 I don't know much about this "Academy" (Korean?) model kit -- I've only seen the box. J3R was the model number of the right hand drive version of the Mitsubishi J3. However, Mitsubishi never produced a Jeep with rectangular headlights (like the Mahindra CJ Deluxe) -- this seems to be a feature dreamed up by the designer of the model kit. 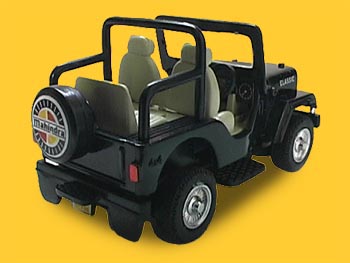 This detailed 1/35-scale plastic Jeep by Centy Toys from New Delhi, India, was "developed in collaboration with Mahindra & Mahindra Ltd." and is a pretty accurate model of the Mahindra Classic. Along the lines of "Coca-Cola Classic," the Classic name has been used by Mahindra since the late 1980's for their still-popular version of the CJ-3B. 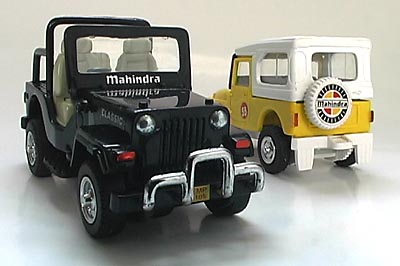 The roll bar, upgraded wheels, and chrome bush bar on the front bumper are distinctive features of the Classic.

The Centy line also includes what might be considered the other classic Jeep from India; the MM540, with a removable ROPLAS fiberglass hardtop. Both toys were manufactured in 1998, with pull-back friction drive, and all-plastic construction. The MM540 is a slightly smaller 1/40 scale, so the two Jeeps are not a perfectly matched set. 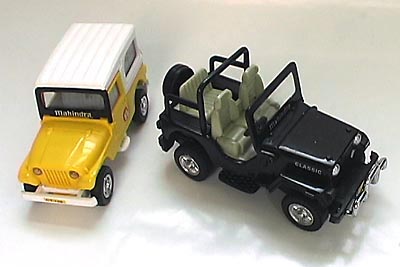 The most obvious differences between the MM540 and the Willys CJ-5 on which it was loosely based, are the CJ-7-style doors, and the headlights which are completely outisde the grille slots.

See the colorful packaging cards (60K JPEG) with prototype photos. Thanks to Srivardhan Srinivasan for sending the Centy toys from India.
Thanks to Brian Willoughby for the Tomica photo, and Richard's Mitsubishi Model Car Collection for the Nichimo photo. -- Derek Redmond

Also on CJ3B.info, see Jeeps Around the World for full-size Jeeps in India and Japan.