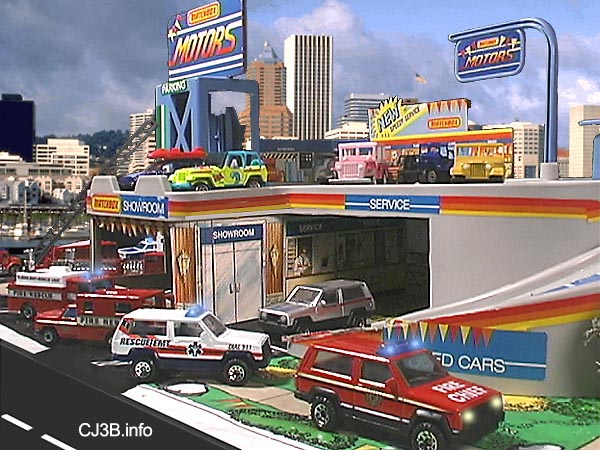 Matchbox has several versions of a chief's car based on the XJ Cherokee. The original version is seen here responding with other Matchbox Fire Rescue and EMS vehicles (and a Majorette aerial ladder) to an incident of a Jeep trapped in the vehicle elevator of the "Matchbox Motors" service department. It's a frequent call for the local ladder company. They also respond when Jeeps with 9-inch brakes come down the exit ramp from the second-floor service area, and straight through the plate glass doors of the showroom. 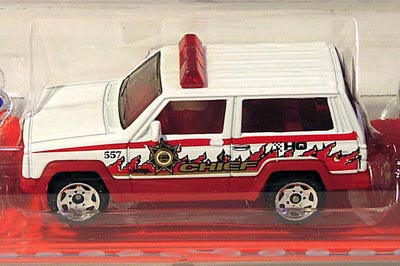 This Matchbox XJ Chief's car, part of the 2002 "Rescue Chiefs" multi-pack, was the first one to have a red light bar.

For many years, Matchbox and most other small diecast toy lines had used the European-standard blue warning lights on fire apparatus, even models based on North American prototypes. See for example a bare bones Matchbox Fire Chief XJ (70K JPEG) from a 1997 5-pack. 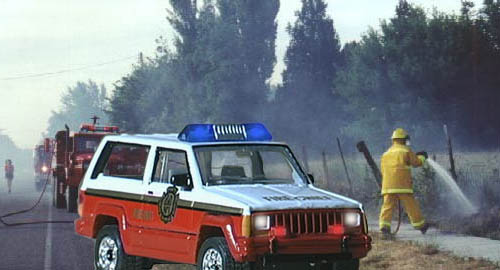 This limited-edition Premiere Collection Fire Chief Cherokee, in a more realistic two-tone livery, was released in 1999, and a less realistic XJ with a yellow light bar appeared in 2004.

A Matchbox 1/58 WJ Grand Cherokee (30K JPEG) released in 2001 as part of a fire vehicle 5-pack, has no light bar or other detailing other than the "Metro Alarm" graphics. 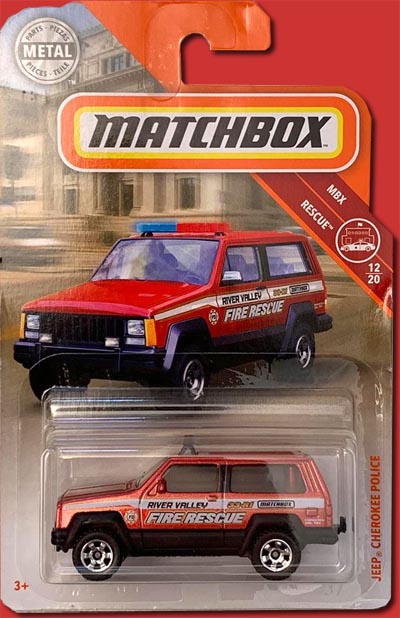 Although the real DaimlerChrysler Jeep XJ Cherokee has been out of production since 2001 and is gradually disappearing from the apparatus roster of fire departments, the Matchbobx XJ made a great comeback in 2018. As on most of the MBX Cherokees with a light bar, the card is labelled "Jeep Cherokee Police", which I have to assume refers to the Cherokee Police Special Service Package which some fire companies did purchase for their chief's units.

The graphics on the model are for "River Valley Fire Rescue", which is a fictitious department, although there is an actual "Cherokee Fire Department" in the Little Sioux River Valley in Iowa!

As far as light bars go, the new style here is apparently intended to look like a low-profile LED light bar, and enables Matchbox to trim costs slightly by making it part of the same clear plastic piece as the windows.

In 2000, Majorette finally issued a fire service version of its XJ Cherokee, the one that had been used by so many sheriffs and surfers over the previous decade or so. It was available as #224 (30K JPEG), or as #376 (left) when packaged with the same plastic water tank trailer pulled by the Majorette Range Rover pumper.

I hate to complain, but why would a support/command/EMS vehicle like this be pulling a large water trailer? And couldn't they have come up with something more interesting than "Emergency" for the lettering on the side? OK, I'll stop complaining, but maybe Majorette could take a look at the Laguna Beach Lifeguard Jeeps or even the Suggested Matchbox Cherokees for 2001 for some more ideas. 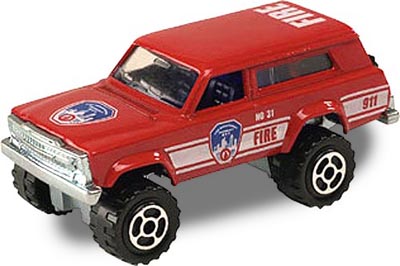 However, Majorette is full of surprises. A Fire 911 version of their small diecast SJ Cherokee, which has been around in many variations since the 1970's, was a new release for 2002, with a realistic fire department paint job (but no light bar). Too bad that Majorette's North American distribution was pretty thin. 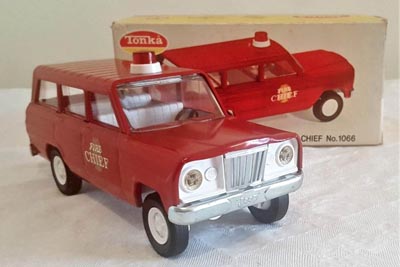 Tonka's fire toys (made in Minnesota) included this 9-inch-long Mini-Tonka Fire Chief's unit, based on the Cherokee. See also a two-tone version (60K JPEG) with a white roof.

The Chief's car was available in a Fire Department Set No. 103 (100K JPEG), together with the Gladiator fire truck (45K JPEG) and a red CJ. 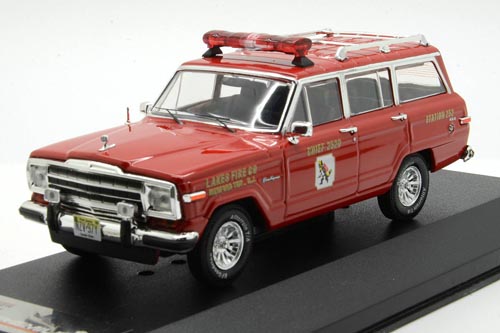 A 2014 release in the PremiumX series from Ixo Models in China, this 1/43-scale Chief's car is a version of their highly detailed 1989 Grand Wagoneer.

It was nice to see the correct lettering and graphic for the old Lakes Fire Co. in New Jersey, although the actual vehicle (40K JPEG) used by Lakes Fire Co. was a slightly different 1979 Wagoneer. 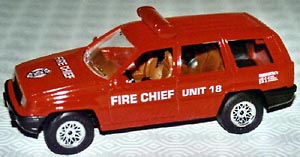 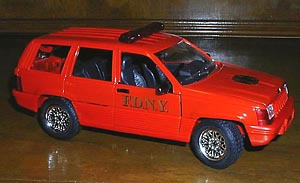 This 1/18 model from Solido carries New York markings. See a larger copy of the photo (40K JPEG) See also a side view photo (30K JPEG) of this large, well-detailed model. 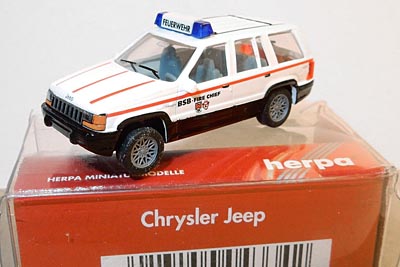 At the other end of the size spectrum is this Herpa HO-scale (1/87) ZJ in European-style livery. A "Search and Rescue" version is on the EMS Toys page. 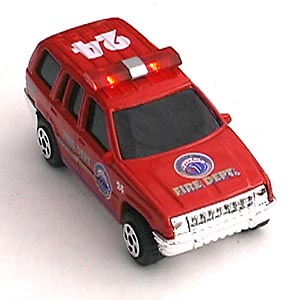 The red lights on this little diecast flash when you press down on the vehicle. Made in China and sold under the Realtoy or FastLane brand names, it's a Grand Cherokee whose siren also sounds.

The badge on the hood and doors says "Emergency Service" and shows a fire helmet. Small text on the sides reads "Rescue Equipment." 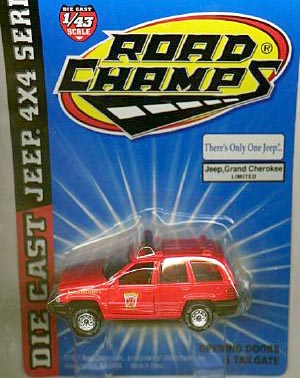 Road Champs settled on the Baltimore FD for the livery on its Grand Cherokee Limited. Nice to see a toy based on a real-world example, although there are not a lot of full size Grand Cherokees actually in service with fire departments, probably due to budget realities.

See some some full-size Fire Service Cherokees on CJ3B.info.