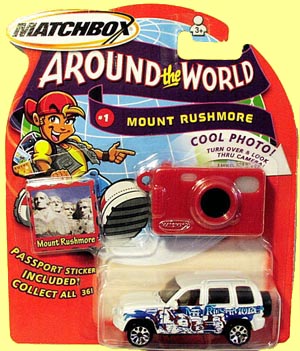 The year 2004 was a pretty good one for new toy Jeeps from a number of manufacturers (watch for the "2004 Trends" poster coming soon), but Matchbox mostly treaded water this year, as they retrenched from last year's "Hero City" experiment with fantasy cars. About the only thing worth noting was the fact that the Jeep Liberty was #1 in the "Around the World" series, which came in some deluxe bubble-card packaging.

Most kids in the store flipped the cards over to look at the tiny transparency inside the plastic camera, before they took a close look at the vehicle on the card. Despite DVD's and digital cable and X-box, there is still something fascinating about looking at pictures inside a little box. I think somebody is missing an opportunity here -- there should be Viewmasters all over the store shelves. 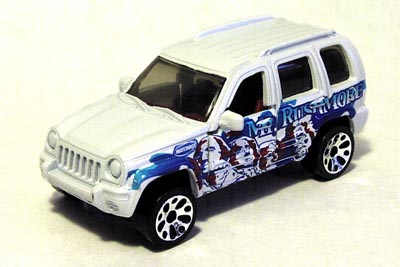 Maybe the Mt. Rushmore Liberty had a subliminal effect on me; how else do you explain me buying a white Liberty this year? I went to the dealer planning to get a TJ Unlimited. I guess when you take the family on a test drive, four doors beats a solid front axle. I still have a picture of the Dakar pinned up on my wall -- oh well. 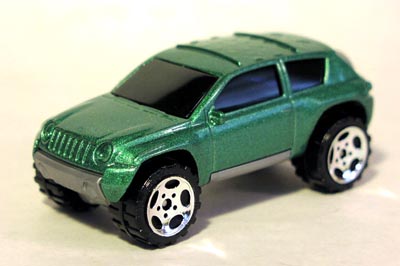 Speaking of Jeep concept vehicles which never made it onto the market except in toy form, Matchbox was on that bandwagon in 2004. I'm not sure about the appeal in 1/64 scale of this one, the Compass. It's one of DaimlerChrysler's forays into the mini-sport-ute area, and I assume they must be encouraging toymakers to try it, as one way of promoting the concept and testing the waters. 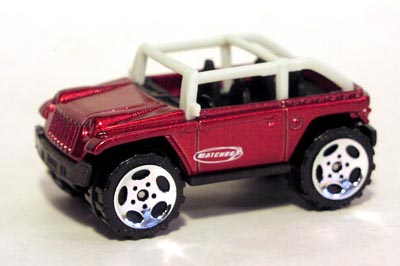 The Willys II concept has been getting good support from Matchbox -- they brought it out in a bunch of different paint schemes this year, including Coca-Cola Football Town USA, Sponge Bob, and Tiki of Hawaii Mysterious Tours. It certainly fits into the new look at Matchbox, which seems to be moving toward a line of custom and fantasy vehicles similar to Hot Wheels, and away from anything you might actually see on the street -- probably in response to market research on kids wired into video games. 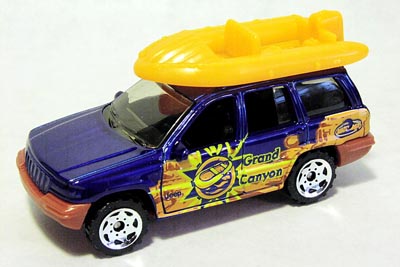 Unfortunately this trend has meant a lack of interest in doing anything significant with the TJ or the flatfender casting. The only "old-fashioned" Jeep in the "Around the World" series was another rehash of the WJ with yellow Zodiac on top.

I can understand why ideas like The CJ3B Page Collection might be too boring, but I can't believe Matchbox missed the great opportunity for a Yogi Bear jeep (see my visualization, 20K JPEG), as part of the Hanna-Barbera 5-pack in their "TV Heroes" series. They gave him an RV instead; talk about boring.

This colorful orange, red and yellow version of the Fire Chief Cherokee did appear early in the year in a 5-pack of chief's vehicles. See also a left side view (80K JPEG). Not sure what kind of fire chief wants a yellow light bar so people will mistake him or her for a tow truck. 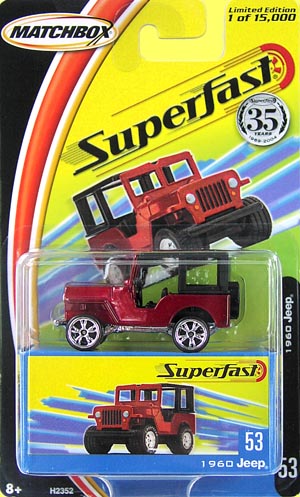 I can't believe I'm putting the flatfender at the bottom of the page. I guess I should be pleased that the venerable Jeep was included as #53 in a series commemerating the 35th Anniversary of Lesney Matchbox Superfast models (which appeared in response to the 1969 debut of Hot Wheels). See also the Jeep Wrangler (90K JPEG), #57 in the series.

But look at the wheels on these Jeeps -- they may be Superfast but they make the toys look like the cheapest dollar-store throwaways. Seen in comparison with the ilustrations on the card, they appear to be wheels from your neighborhood street racing car. What was Matchbox thinking?

One can only hope that this appearance in a restrospective series doesn't mean an ignominious end for Universal Jeeps in the Matchbox line.

Thanks to Mike Albright for the photos. -- Derek Redmond