The Hong Kong/China diecasts often show up in police, fire or rescue versions. These examples are a CJ Ambulance, the Kidco M*A*S*H Hardtop Jeep, a Rescue Hardtop, and another CJ Ambulance variation.Note that the two left Jeeps have slatted grilles, and the two newer Jeeps on the right have the trademark-dodging cross-hatched grilles. (see Jeep Toys of the 1980's for more details.)

The back doors open to show the patient on a strecher (see also Derek's photo of the interior (20K JPEG). 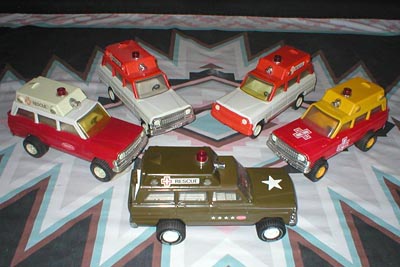 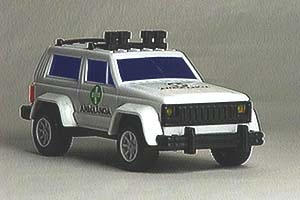 The Glasslite XJ Cherokee "Ambulancia", about 5-1/2 inches (14 cm) long, is a plastic toy made in Brazil. 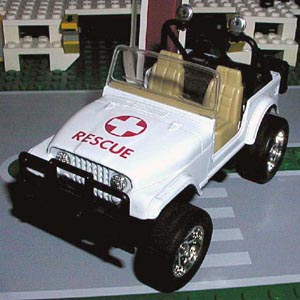 This is the spring-driven Rescue Jeep that recently was listed in a survey by the Public Interest Research Group as a dangerous toy! Made in China, it's approximately 1/32 scale. The tires, which can crack and come off easily, are considered a choking hazard which requires a warning under the U.S. Child Safety Protection Act. 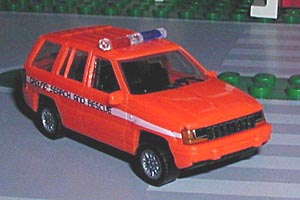 The Herpa HO-scale ZJ Grand Cherokee was made in several colors, including this red "Ground Search and Rescue" version. 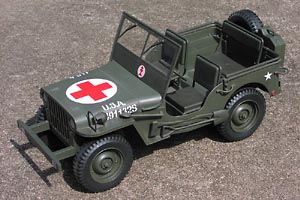 From 1/87 scale to 1/6 scale: this is the Ambulance version in the Soldiers Of The World (SOTW) series Jeeps. These plastic jeeps are approximately 21 inches long (54 cm), with excellent details. 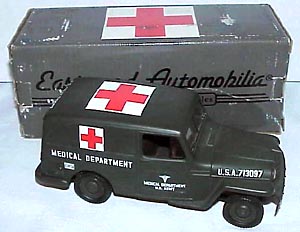 This U.S. Army ambulance or "litter carrier" is one of perhaps 40 different paint versions of the '53 Willys truck made by SpecCast. See also the Jeep Parts Delivery version (30K JPEG) and the Toledo Fire Department version.

The Army did apparently convert some 1,000 civilian Willys station wagons as litter carriers about 1951 (see Willys Military Ambulances) and that experiment is perhaps the prototype for this model. 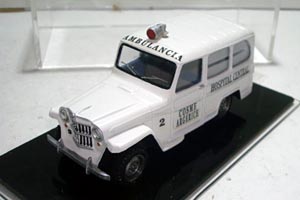 The civilian Willys ambulance or perhaps a version built by IKA in Argentina is the prototype for this 1/43 cast resin model, sold on eBay as handmade in Argentina. It's lettered for the Argerich Hospital in Buenos Aires (named for early Argentinian physician Cosme Argerich.)