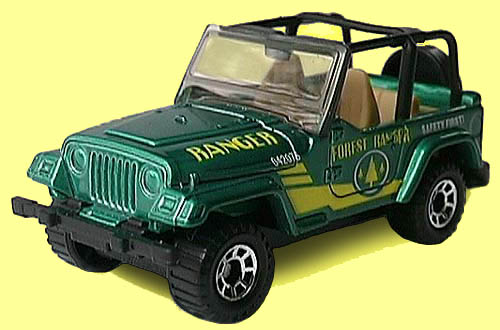 The 1998 Wrangler, number 68 in the 1999 Matchbox series, is a brand new 1/56 scale casting that at last makes up for the loss of the original Matchbox No.72 yellow CJ-5 (see The Matchbox Jeep Story). Many collectors will agree that one of the first toy Jeeps that caught their eye was the yellow CJ-5 of the 1960s. The model was surpisingly never sold in any other paint scheme, which is very much unlike the current practice of getting maximum mileage from a casting by releasing it in a variety of versions.

After several years of nothing from Matchbox but recycled MB's and CJ-5s with oversize wheels, it's nice to have a new, well-detailed and well-proportioned model. For the first time, Matchbox has taken the Hot Wheels approach and gone with a solid clear plastic windshield with no metal frame. This is probably a good compromise providing strength and prototypical scale, although it doesn't stand up to close scrutiny.

Finished in green with "Forest Ranger" graphics, the Wrangler was available first in Europe, as the multilingual No.63 (35K JPEG), without the English "Forest Ranger" and "Safety First" text. The European version also has "1259BJ" stenciled on the base, while the Ranger version has "2169BJ" on the base. See a photo showing the base details (25K JPEG) which are significantly better than on previous Matchbox Jeeps. 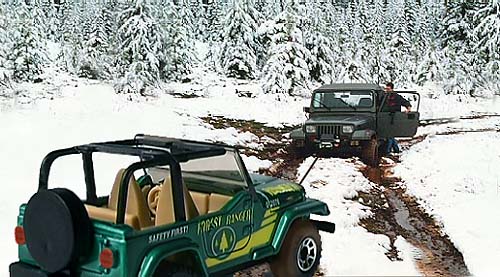 The Matchbox TJ was already available in a couple of different paint schemes by December 1999, and is likely to show up in a few more before too long. This photo finds the Forest Rangers helping Mitch (Hoss) Hosford's YJ out of a sticky situation he got into while looking for his 1999 Christmas tree.

The photo below shows the Black Star Ranch version of the Wrangler, available as of the end of 1999 only as part of a 5-vehicle set. 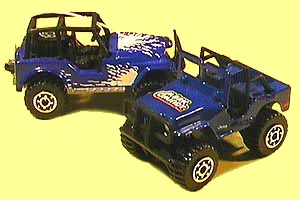 Matchbox hasn't given up on the built-up CJ-5 casting and the venerable flat-fender casting (see The Matchbox MB: Is It Really a CJ-3B?). They both appeared in a handful of new paint jobs in 1999, notably a "Mork& Mindy" Jeep in the Star Cars series, capitalizing on the CJ-7 which appeared in the TV sitcom. This, along with a couple of other versions of the flat-fender, featured a tampo of the actual "Jeep" logo on the side, for the first time.

Matchbox also started to make better use of their 1/58 scale 2-door Cherokee XJ casting in 1999, releasing several variations which, however, seemed to be available in limited numbers and hard to find. Like the Forest Ranger TJ, the Cherokees were a bit different from what you would expect: in addition to an EMS ambulance, there was a City Water Works version with amber light bar (25K JPEG), and an airline pilot version that came in a 5-vehicle set. The photo below shows the two-tone Fire Chief's unit from the Matchbox Premiere Collection, in service at a grass fire in Utah. 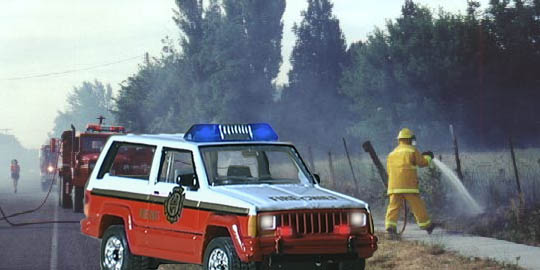 The background for the picture above was photographed by Jolly Goodfellow. The models and backgrounds in the action photos were combined using Photoshop software. Lights were also enhanced by retouching in Photoshop.