The World War II jeep used a two-bow hinged top which could be folded down (50K JPEG) and stored on the jeep without disturbing the jeep's primary function as a personnel carrier. This photo, courtesy David Rust, was taken on 25 February 1943 and is captioned on the back "Gail in a Peep." 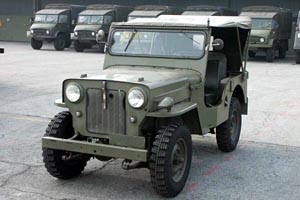 The double-bow hinged top has since been put on other military Jeeps, including high hoods in Vietnam and the Swiss Army (right). Because the military tailgates were usually bolted shut there was no need for tailgate access.

Johnnie Peoples describes how he made the bows: "I used 3/4" conduit for the two feet, and used a torch to heat and form the flat part. 1/2" conduit for the bows, bent with a conduit bender, and 1" stock about 1/8 or 3/16 thick to make the side mounts. I bent them by placing them on a pipe to get the curve. I used a wire welder to put everything together. Flatenned the swinging bow the same way. Lots of heat. You can add or subtract an inch or two to make it fit to the Jeep. I think I used the curved part of my shop vice to get the shape needed for the four feet."

The civilian Jeep presented problems that the military jeep didn't have to deal with. Since the civilian Jeep was billed as a power source and truck for farm and industry, it needed the tailgate and unobstructed loading and hauling capabilities. This made the military top unusable as a civilian top. Not only couldn't it be stowed conveniently but also it would have been difficult to convert to an all-weather closed civilian top with easily opening rear panel, side panels and doors. A re-design was necessary for civilian use. 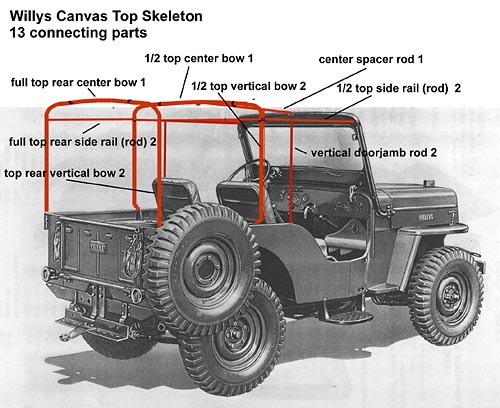 From the beginning Willys-Overland was concerned with providing an all-weather top tailored to the seasonal needs of the civilian market. The top they developed remained almost unchanged from 1945 through the end of its production in the late 1960s. The steel skeleton of tubes and rods could be used for full tops, half tops, or surrey-style tops, and lots of variations in between. All but one of the civilian canvas tops mentioned in this article use the same system of bows and rods.

A center rod, from halftop center bow to windshield, added additional rigidity to the skeleton. See Lawrence Wade's photos of the original framework on a 1955 CJ-3B.

Bow sockets (20K JPEG) were separate units welded to the rear corners of the body. When a bow was inserted into this socket it became part of the rigid structural support system for the canvas top. With the disappearance of the original canvas tops in the 1960s, the rear bow sockets gradually lost their reason for being. But they remained on CJ-5s as standard equipment into the early 1970's. 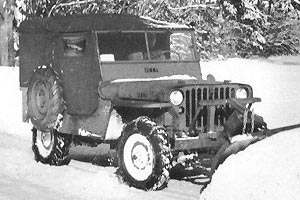 This photo, dated 1944 (from Fred Coldwell's Preproduction Civilian Jeeps) shows an experimental version with canvas doors that roll up. The position of the spare tire makes a steel-frame reinforced canvas door unworkable. On this version there are no rear side windows. The vinyl door window is small and rectangular, unlike the larger and more complex shaped window found on production models of 1945 and later. 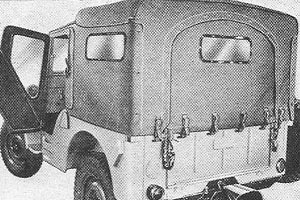 This CJ-2 shortly before production, also from Fred Coldwell's book, has a full top with glass side and rear windows. By this time the steel skeleton and canvas covering had been established, and changed very little over the years. Its door latch worked in an interesting way. The door handle is not on the door but just behind the door on the half top side panel.

Stig Edqvist's The Jeep in Sweden includes a photo of a very early CJ-2A with column shift and a canvas half top with the door handle behind the door (130K JPEG).

Elsewhere on the web, see a CJ-2A Original Canvas Top and Bows. 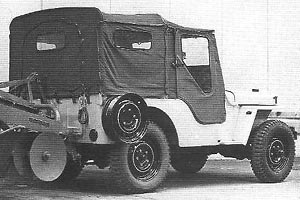 By 1946 the handle had been moved to the conventional location on the door. On this Jeep, a CJ-3A also from The Jeep in Sweden, the rear side panels and rear roof section extend only up to the rear of the halfcab, where they are attached with zippers to form a complete full cab enclosure. This is the most flexible and perhaps most complicated of Willys soft tops, with 7 pieces; two doors, two side panels, two roof sections, and the rear panel. 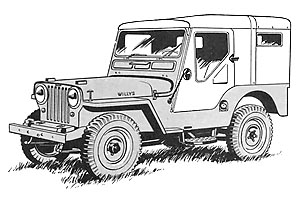 The 7-piece enclosure can be a complete halftop or a complete full top. This illustration from the Willys publication Jeep Operation and Data shows the joint between halftop and rear section. The small triangular flap in the door is most likely for hand signaling stops and turns. The factory photo on which this drawing is based is the only one I've found showing this flap. Perhaps not a long-lived idea, as electric turn signals were soon to replace hand signals. 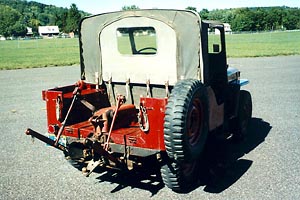 The folded rear section and the footman loops on the body and tailgate (80K JPEG) can be seen in a photo of Joe's 3A by Bill Lagler. The metal loops are used to secure the rear side and back canvas panels, and were supplied in the 7-piece canvas full top enclosure kit. See also an interior photo (60K JPEG) showing the center rod.

Although there were dealer-installed hardtops also available, this Willys advertising photo for the CJ-3B suggests the soft top was considered quite adequate for extended winter use. The 6-piece top seen here is not convertible to halfcab use.

A photo of Burchell Clark with his '61 CJ-3B in 1965 shows details of the rear of the canvas top (75K JPEG). See also Paul Wallace with his brand new 1954 CJ-3B and 6-piece full top (30K JPEG). The side panels extend all the way forward to the doorjambs. 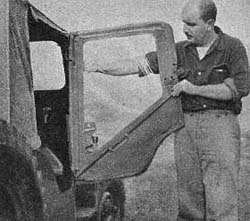 The standard CJ canvas top was not without its detractors. Tom McCahill, the 1950s automotive critic, said of his early 3B, "The top...I feel, must have been designed by an army straight jacket case.... To get this silly half cover down you need three less tools than they have in the General Motors Experimental Lab." And he had just the four-piece half-cab top (100K JPEG), the easy one. 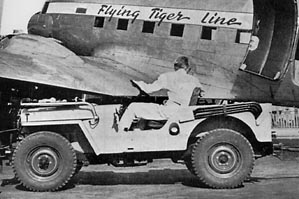 Tom McCahill was probably not alone in his frustration with the Willys Overland canvas top. The CJ-2A in this Willys advertising photo shows the bows neatly stowed in the side-mounted storage brackets, as if the driver decided to take it down on this fine day, only to put it up at the first sign of rain. And that may have happened a few times. But the fact that there are so few photos of CJ-2As with their bows stored in the brackets suggests that the owners may have rapidly tired of putting the top up or down and stowed the top in the garage in the summer and on the CJ in the winter.

It seems that Willys finally got the idea that the top was not an "easy-up" and "easy-down" top, and the side-mounted storage brackets were discontinued early in the CJ-3A era. So by 1952 when the CJ-3B was introduced, the top-bow storage brackets were long gone. It was either "top on the 3B" or "top off the 3B" (and in the garage).

See a larger copy (60K JPEG) of this photo of two classics: a CJ-2A with a DC3/C147 in the background. The DC3 was designed in 1935 and continues to operate commercially today.

See also a page from a Willys Industrial Equipment book, showing a few variations of the Willys canvas top in use on a CJ-3A. (130K JPEG). 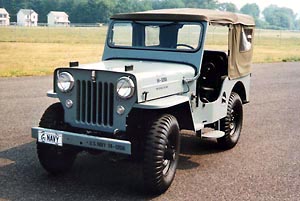 The U.S. Navy used the CJ-3B almost unmodified. In fact the only things Navy, visible from the front of Joe Caprio's Navy CJ-3B, are the headlight guards similar to those on the M38. Since the spare tire remained on the side, the standard civilian top with tailgate access was suitable.

Joe purchased this olive drab canvas top unused in its original container, at a military show and parts sale. It consists of 6 pieces; the top, two doors, two side panels and the rear panel. In this version the entire tub is enclosed and the top cannot be converted to a half top configuration. Although not as versatile as the 7-piece enclosure, it is simpler and probably easier to manage.

The framework for the DJ-3A Surrey Gala top (160K JPEG) is essentially the same, with two fewer parts than the standard skeleton. Since it has no doors the doorjamb rods, normally found in front of the halftop bows, are missing. These colorful Surrey tops were made of vinyl-coated canvas. The photo shows Ron Szymanski's 1960 Surrey.

The 1956 Universal Jeep Service Manual gives instructions for installing the bows, rods, and canvas. It reveals an interesting innovation in the CJ-5/6 top skeleton and windshield. The half top center bow and the windshield have footman loops installed. Straps with buckles reach from the windshield to the top bow. This is for storing the door or doors below the roof when removed for ventilation. This answers the question of where the doors are stowed when not in use, at least on the CJ-5/6. Otherwise the instructions apply as well to the 3A and 3B.

Elsewhere on the web, see Installing a Canvas Top on The CJ-3A Page. 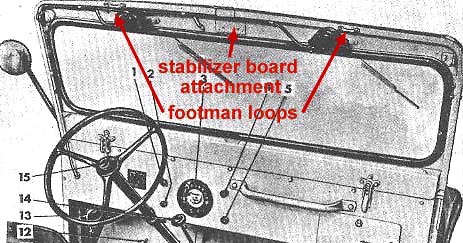 Also on CJ3B.info, see a history of Jeep Hard Tops.