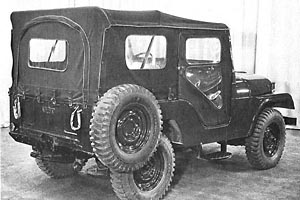 The 1962 Willys Motors master Parts List describes the parts for a Willys folding top available for both the CJ-3B and CJ-5. This factory photo of a 1955 CJ-5 shows up in Jeep books with very few comments, and is probably the top described in the parts list. The bows fold by pivoting on the body.

This top may signify a changing philosophy in that it begins to focus on the Jeep as a recreational vehicle. It is interesting because it differs from what one expects on a Willys canvas top. Inside the rear windows we see a different style bow system which hinges to the body next to the spare tire, similar to the MB. They appear to fold again for greater compactness in stowage. The bows are designed to act almost exactly as the original stationary bows, except that they do not use the bow sockets. The cut and stitching on this canvas top look a little odd at the rear corners and rear top. It looks as if it is made so that the original (non-folding) bows could also be used with this top. It is an interesting response to those pesky vinyl aftermarket tops entering the Jeep accessory market, which were easier to use, more "modern" looking, and probably less expensive than the factory top.

The standard Willys canvas top was sold through 1962 and continued as a military (and export) top until the end of 3B production, and possibly later on some military jeeps.

I bought my first CJ-3A in 1969. I became a rubberneck examining every CJ I saw on the road or in parking lots. I was looking for a top to buy, and one top had a real dramatic presence. It was most likely a White top. 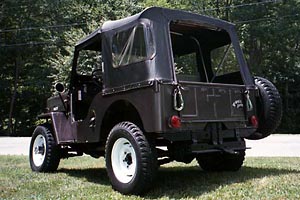 At some point, aftermarket suppliers decided they could create a better, easier to use, top. The White top, by the White Manufacturing Company of Colorado, replaced the Willys Motors standard canvas top as the approved accessory top sold by Kaiser Jeep dealers in 1962. A fine example of the White top can be seen this 1963 CJ-3B. See also the interior of the doors (100K JPEG).

These new vinyl tops did not depend on stationary bows for structural strength. Instead their structural system could be compared with unibody construction (which was pioneered by Nash and followed by most other manufacturers). In unibody construction the frame and skin (sheet metal) become interdependent, much as in airplane construction. In the White top the hinged bows are unstable until the top is in place, and then the taut vinyl canvas adds strength and stability to the entire system.

The rear bow sockets were now redundant, and for the CJ-3B the White top has arcs cut and sewed into the bottom edge, which go up and over the unused sockets. 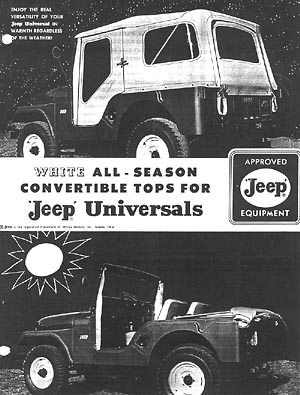 This White All-Season Convertible Top sales brochure from the early 1960s shows a CJ-5. See a larger copy of the front of the brochure (180K JPEG) showing the strips remaining at the front when the zippered doors are removed.

See also the back of the brochure (250K JPEG) showing the ease of "laying down" a White top. Another advantage of this soft top system is that it is relatively easy to fold down and put up, making it a true convertible. By comparison with the earlier Willys-Overland canvas tops it was an innovative system. 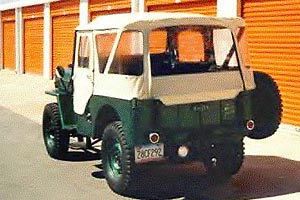 At least one other manufacturer, Bestop, took the same route as White to avoid the unused rear bow sockets. This 1980's-vintage Bestop on Lawrence Wade's 1955 CJ-3B also arcs above the bow sockets. The fabric is stretched tight enough to create a positive waterproof contact at the corners.

The Bestop now only available in black, but it still has built-in arcs to go above and around the bow sockets -- a photo from the Bestop printed catalogue shows a Tigertop on a CJ-2A. See also a photo of the frame for a Bestop door (100K JPEG). 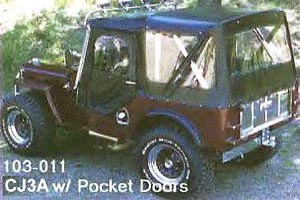 The Kayline top and the later Specialty top, no longer manufactured, took the opposite approach, recognizing that the bow sockets had no function other than to hold flags for the fourth of July parade, and could be altered or sawed off to make room for the soft top. Now, I don't have to tell you that when people start talking about cutting off seldom used parts, it makes some of us a little nervous.

The photo here of a CJ-3A with Kayline top was from their online catalogue: notice how the bow sockets have been removed. Note also that the Kayline top has slightly arched windows in the doors. 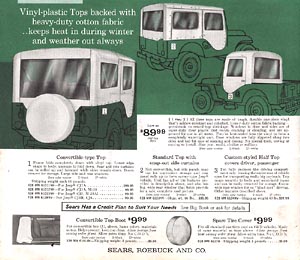 The Sears Jeep Replacement Parts Catalogue for 1972-73 shows an interesting soft top for military and civilian Jeeps. Made with vinyl-coated heavy duty cotton, these tops came in both a non-foldable and a fold down version at a slightly higher price, $99.98. It is interesting that in the catalogue illustrations of Jeep vehicles, the rear bow sockets have been removed. The implication is that with this top the bow sockets are irrelevant and might as well not be there. These Sears tops, whether folding or not, used their own style of bows and rods. The removal of the rear bow sockets and side bow holders on early civilian Jeeps was a common modification as they were regarded as old-fashioned and served little practical function if the original W-O canvas top was no longer used.

We are fortunate to have photos of an existing Sears top (70K JPEG) on Del Kronstedt's 1953 CJ-3B. Del's top appears to be the standard top with snap-out side curtain. Although this version does not fold down, when the doors and rear side panels are removed it functions similarly to the Willys-Overland surrey top.

A convertible top was sold in the Montgomery-Ward Jeep catalogue.

How come I've got bow sockets and you don't?

In the thirty-odd years since the last CJ-3B rolled off the assembly line and the last tattered canvas soft top was removed in favor of a modern vinyl top, the rear bow sockets have become useless appendages, and the evolutionary process grinds on. In an unscientific survey of CJ-3B owners and photos, I found that almost thirty percent of 3B's pictured had no rear bow sockets.

Body repair, replacement panels and replacement tubs have all contributed to the disappearance of the rear bow socket. Since they served no function there was little reason to replace them and I'm not sure they were available from parts suppliers anyway.

A kit including all the top bow brackets and sockets (35K JPEG) was produced by Lars Svensson in Sweden. 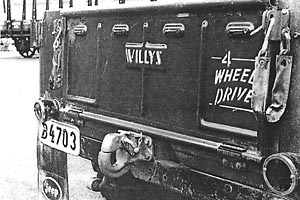 In the sheet metal design of the CJ-5, the rear bow sockets were lowered about 1-1/2 inches to accomodate canvas or vinyl convertible tops, and possibly sheet metal hard tops. Roger Bensgård points out that the lowered bow sockets are clearly visible in this photo of the rear of a CJ-5 from Stig Edqvist's The Jeep in Sweden.

The purchase of Kaiser-Jeep by American Motors in 1971, and the emphasis on style, may have spelled the end for the seldom-used bow sockets. Somehow unused bow sockets don't blend well with three-color paint jobs and racing alloy wheels.

Thanks to Bart for the writing, and to the photo contributors: Adam Charnok, Lawrence Wade, Joe Caprio, Stig Edqvist (The Jeep in Sweden) and Bestop. -- Derek Redmond

Also on CJ3B.info, see Putting on a Soft Top.