The Jeep in Sweden by Stig Edqvist

Bart McNeil reviews a book that we only recently realized has a lot to offer regarding the CJ-3B era, as well as earlier Jeep history. Click the photos to see larger copies. 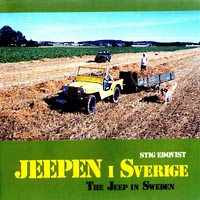 One of my initial observations on receiving The Jeep in Sweden by Stig Edqvist, was that this book is different from any Jeep book in my collection (see The CJ-3B Bookshelf). It is not just a series of identifying photos. It is not a coffee table book. It is not a manual. The photos are clear and informational, not pretty or exquisite, and few of them are of restored Jeeps. Most photos are from about the date of import to Sweden. The book has very little military romance in it -- it is factual and informational. Some models are ignored completely because they were never imported, but if a model was imported surplus, or new, it is in the book. 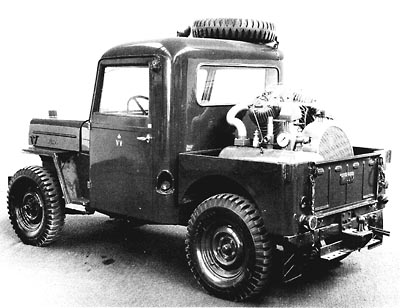 The photo at right shows a CJ-3B modified to carry an air compressor, for the National Road Board. It is designated a CJ-3BH, the H probably signifying the eleven-inch extension and heavy duty modifications. It can bear a load of 1820 lbs. The compressor is held in with four bolts and can be quickly removed and replaced with street sweeping or welding equipment using the same bolt holes.

Many of the photos detail modifications to the imported civilian Jeeps and Jeep trucks. They weren't satisfied with the standard Jeep but had to test and study it and then modify it to their particular climate, agricultural, industrial, and military needs. Many of their hard top modifications appear more as fine coachwork than a steel or aluminum shelter.

From 1945 until 1964 Scania-Vabis, a heavy equipment manufacturer (which later merged with Saab) imported Willys-Overland products for sale in Sweden. They documented the CJ's with original photos of the Jeep at work in various industries. Aftermarket suppliers began producing hard tops and bodies as in the US, but they are different and reflect the harsh climate and special equipment needs of Swedish industries. 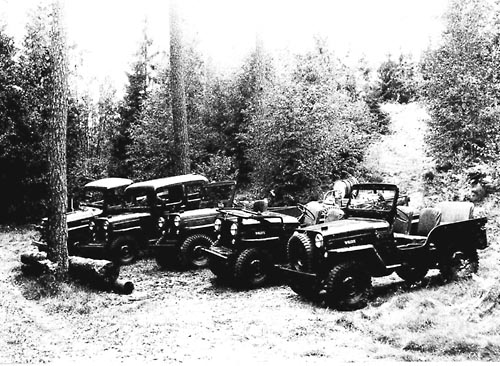 "Four CJ-3Bs and one Jeep Truck for the Forestry Board lined up for demonstration at the Scania-Vabis cross-country range in 1954," reads the caption.

Very few of these period photos of civilian Jeeps have been reproduced in North America. Each photo does have a short paragraph in English so it is possible to follow the gist of the book. Combined with a general knowledge of Jeep history from other sources this book can be "read" fairly well without knowing Swedish. 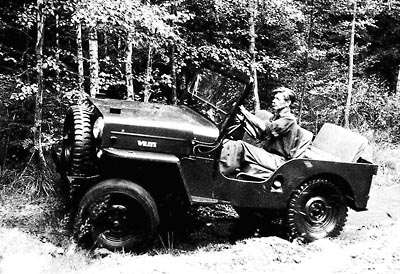 At right: "A CJ-3B demonstrated by Karl-Evert Carlsson, 'Jeep-Kalle', who was test driver for Willys department from 1946 till 1964. He spent much of his time on the road demonstrating and delivering Jeep vehicles."

We learn who imported the first surplus jeep to Sweden and who owned it thereafter. We also learn who delivered the imported civilian Jeeps to customers. Stig Edqvist gives us this kind of information in a matter of fact way, which makes the reader accept and enjoy the information even though we weren't expecting this level of detail. And all this without understanding a word of Swedish.

This book is highly recommended to anyone interested in the visual history of the early CJ from 1945 to 1964. Later models and even off-roading is covered, but much of the book is focussed on surplus military jeeps and early civilian Jeeps and trucks. A noteworthy CJ-2A now belonging to Roger Bensgård (a contributor to The CJ-3B Page) can be seen in the color section (page 190) along with its history of ownership. 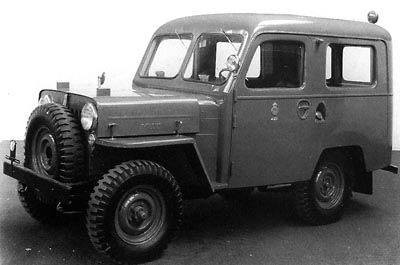 At left: "CJ-3B equipped as a power line inspection vehicle for the State Power Board. The fully enclosed metal cab was built by the Karla works at Laholm in 1954. The Jeep has two heat outlets at the windshield, a searchlight on the side and a working light at the back." Note the parking lights, moved to accomodate the front-mounted spare tire.

Apparently there were only 317 CJ-3Bs imported in Sweden. Yet there are roughly 22 clear 3B photos in The Jeep in Sweden, from various angles and showing different functions and modifications. Those 22 period photos are more in number than can be found in all other Jeep books combined. Most CJ-3B owners have never seen any of them.

See also a Willys Forward Control FC-170 (100K JPEG) supplied to the Royal Prison Board. Some of the modifications to FC trucks tripled their cost and one passenger FC was so well designed that Kaiser-Willys bought one and shipped it back to the United States for testing. This Swedish obsession with making things right may explain the Saab and the Hasselblad camera, and may also explain the quality of the research, writing, printing and binding of this book.

Expensive... yes. But try making a 336-page book with 400+ quality photos and selling it for less. The book itself is beautifully produced and printed. It is hard cover with smith-sewn binding so that it can be opened flat without damage. This book is made to be a lifetime reference and it probably will be. About the only thing missing is a Swedish-English dictionary. -- Bart McNeil

Thanks to Bart for the review, and of course to Stig Edqvist for writing the book and giving permission for reproduction of the photos. -- Derek Redmond

The Jeep in Sweden is published by Frank Stenvalls Forlag, Foreningsgatan 67, 211 52 Malmo.