See Acapulco in a Pink Jeep 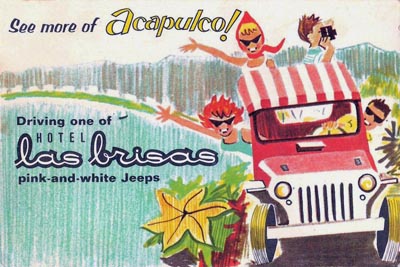 Las Brisas: Birthplace of the Jeep Gala describes the role of the Las Brisas hotel in Acapulco, Mexico in inspiring the Jeep Surrey Gala model in the late 1950s.

Surrey Jeep literature collector Bruce Agan found this folded card with an invitation to patrons of Las Brisas, to rent a Jeep and see the sights of the town shown on the Acapulco map (100K JPEG) on the reverse side. The card is undated but appears to possibly date from the 1970's. 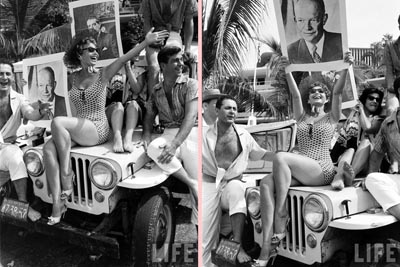 A series of photos taken by LIFE photographer Paul Schutzer in 1959 features a group of tourists at Las Brisas clearly having as much fun as the folks shown on the card above. The occasion was the visit of President Eisenhower for talks with Mexican President Adolfo Lopez Mateos, one month after the Cuban revolution. The article "Ike In Acapulco" appeared in LIFE magazine, 2 March 1959 and the caption for one of the photos (far right) reads, "A shapely fan holds photograph given out to crowds..."

The photo shows the Jeeps were licensed in the state of Guerrero, and that the tires already showed a good deal of wear in 1959. 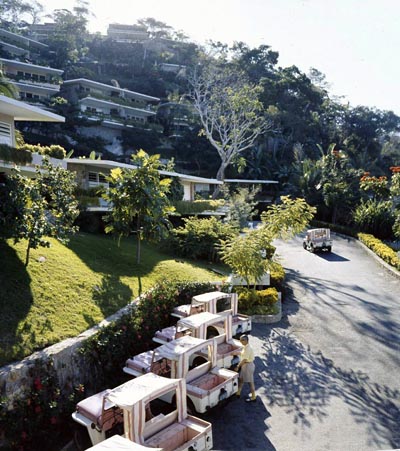 The next time the Las Brisas Jeeps were photographed for LIFE magazine was for an article in 1962 on "Luxury Hotels of the World."

This view of the hotel and another photo showing a lineup of Jeeps (320K JPEG) did not appear in the final article (280K JPEG) on 13 July 1962, but the article did mention that Jeeps were available for rent at Las Brisas for $8 per day.

Coincidentally, this 13 July issue of LIFE had a cover photo and article about the visit of President John F. Kennedy to Mexico.

The Family Comes to Town 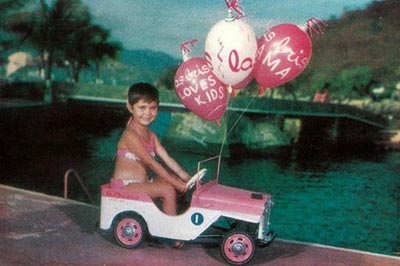 Although Las Brisas has always had a bit of a reputation as a hangout for jet-setters and honeymooners, it has also promoted itself as a family resort. A 1975 ad in New York magazine (90K JPEG) listed a "Family and Friends" package, as well as a "Value Package" including a Jeep with unlimited mileage. 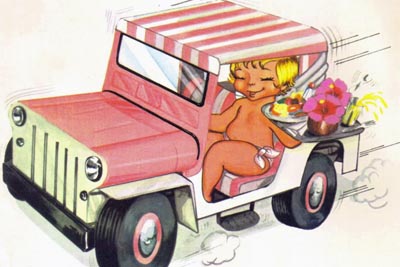 Speaking of angels, this little angel figure was adopted as a trademark by Las Brisas, and is seen here on the back of a room service menu (60K JPEG). 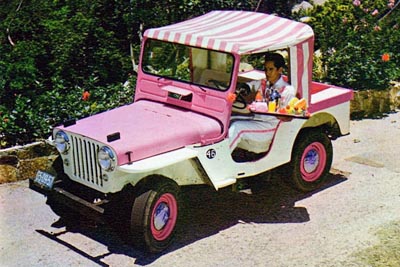 The real thing is amazingly similar, as seen on this postcard. Waiters apparently received special training in driving the Jeeps up the hill to the casitas while holding a tray of drinks with one hand. 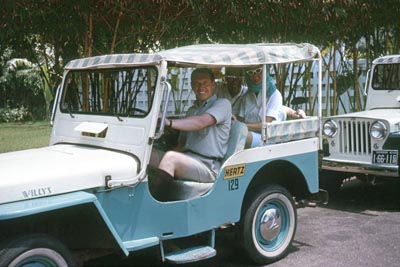 When Hertz got into the act of renting Jeeps in Acapulco, they apparently had some DJ-3A's modified in almost identical fashion to the pink and white ones at Las Brisas, but in white and blue.

These two vacation snapshots found by Dave Eilers date from 1962-63 according to the license plates, but the Jeeps appear to pre-date the Willys Gala which was first sold as a distinct model in 1959. 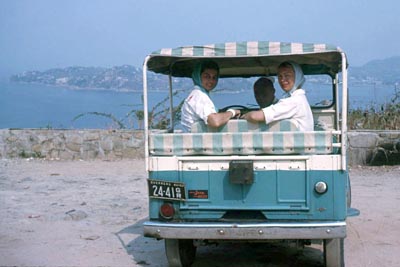 Like many of the Las Brisas Jeeps, these Hertz DJ's have a tailgate and only a single taillight, and lack some distinctive features of the Gala, including the fringe, windshield straps, and extended rear bumper. The two-tone paint scheme also differs from the later Cerulean Blue Gala (100K JPEG).

This one carries a bumper sticker reading something like "If it's a Jeep, it's a Willys," and the ladies wear color-coordinated blue scarves, possibly provided by Hertz.

I Spy Comes to Town

The NBC TV series I Spy was unusual for a television show of the 1960s, in its use of actual exotic international locations, emulating the James Bond films. Episodes were filmed in places such as Athens, Rome, Madrid, Venice, Tokyo, Hong Kong and Morocco. 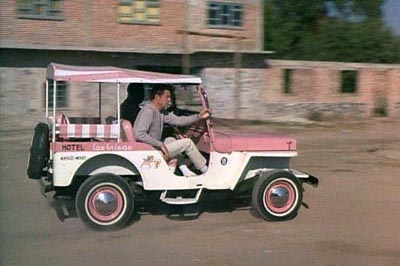 Acapulco was clearly a favorite location, since at least four episodes were shot there. It was exotic, but not too distant from Hollywood, and it appears likely that Desilu Productions had an arrangement with Las Brisas. Probably free accomodation in exchange for shooting scenes there and featuring the pink Jeeps. According to I Spy Then & Now, "Resort managing director Frank Brandstetter proved to be a very accommodating gentleman to the visiting Americans and their camera equipment."

In this shot, another cartoon of the "little angel" can be seen on the side of the DJ-3A. 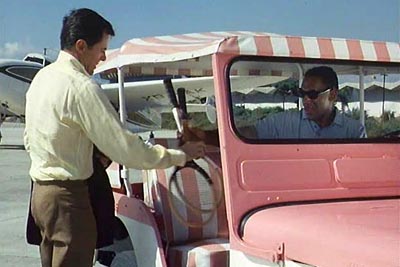 I Spy starred Robert Culp as an American undercover agent travelling the globe disguised as a tennis pro, and Bill Cosby as another agent posing as his trainer.The series was the first American television drama to feature an African-American actor (Cosby) in a lead role. Originally an older actor was slated to play a fatherly mentor to Culp's "Kelly Robinson." But after seeing Cosby performing stand-up comedy on a talk show, producer Sheldon Leonard decided to take a chance on hiring him to play "Alexander Scott". The success of the show is attributed to the chemistry between Culp and Cosby. (Wikipedia) 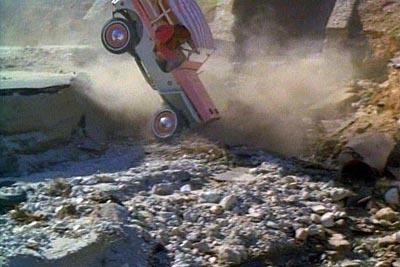 The 1965 episode "A Day Called 4 Jaguar", from the first season of the show, featured guest star Rory Calhoun (with a fake beard) as cosmonaut Dimitri Balin, who disappears in the Mexican jungle to return to the ways of the Aztecs. In one scene, Kelly and Scott crash a Jeep while looking for Dimitri. Photo courtesy of the IMCDB. 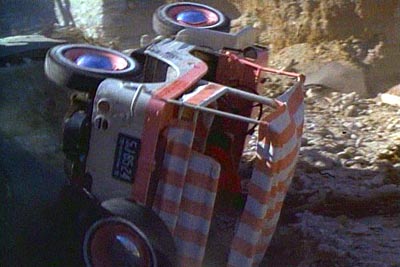 The hotel was probably dubious about lending a Jeep for this scene, and a couple of details visible here -- the grab bar and blackout taillight -- suggest this was a surplus military jeep painted pink for the stunt. 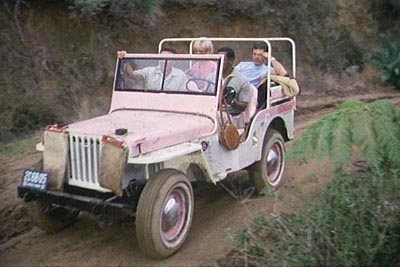 The final episode of the first season was "One Thousand Fine", and this time Kelly and Scott are searching for U.S. gold bullion lost in a plane crash in the jungle.

As it happens, the sole survivor of the crash is an old acquaintance of Kelly, whose girlfriend also turns out to be Kelly's old flame. Here all four are in a Jeep, with Kelly sulking in the back. Once again this seems to be perhaps an old MB turned into a Las Brisas Jeep for jungle filming. The water bags are an interesting touch -- maybe put there to conceal the very different MB headlights. 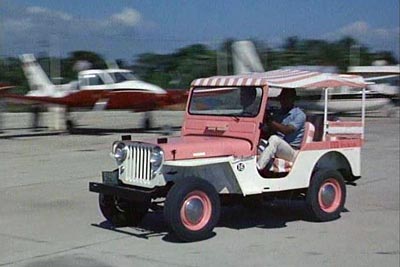 At the end, Kelly is about to fly back to the States with his old girlfriend, but at the last minute decides to stay with his buddy Scott. One writer at The Illustrated Guide to I Spy comments, "I have previously railed against the over-use of the plot devices of Kelly's old friends popping up, and of his old girlfriends stumbling across his path at inopportune moments, and this episode combined them both." 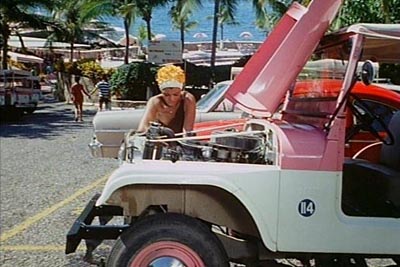 The episode "Shana" was shot in 1967 for I Spy's third and final season, by Christian Nyby, the prolific TV director who did episodes of everything from The Roy Rogers Show in the 1950s to Kojak in the 1970's.

Here's a view we don't normally get of a Las Brisas Jeep, and it's evident here that by 1967 the DJ-5 model had made its way into the fleet, and that the hotel had owned at least 114 Jeeps. 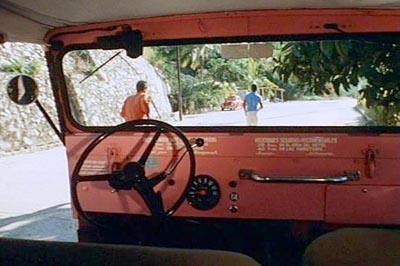 As Kelly and Scott run off on the trail of Shana, a beautiful suspect in the theft of a top-secret sample of rocket fuel, we get another unusual look, at the interior of DJ 114. But I can't quite read the extensive instructions stencilled on the dashboard for guests.

You can also see the Las Brisas Jeeps on the big screen in 1967 in the "Matt Helm" movie The Ambushers.

Thanks to Bruce Agan and Federico J. Cavedo. Thanks to IMCDB for the I Spy frames. -- Derek Redmond