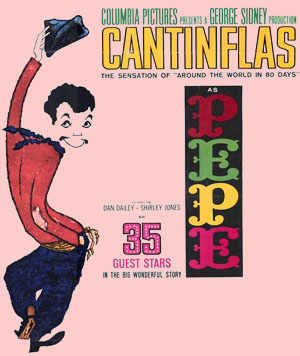 The popular Mexican actor "Cantinflas" (Mario Moreno) had won a Golden Globe award for his appearance in Around the World in Eighty Days (1956), so Columbia Pictures decided to try to make him a star in the U.S. by giving him the title role in Pepe ("peppy") in 1960. (It didn't work. See more about Cantinflas in Wikipedia.)

In this movie, the young Mexican's beloved horse is sold to movie star "Ted Holt" (played by Dan Dailey,) leading Pepe to journey to Hollywood to get the horse back, where he encounters many of the big stars working in tinseltown at the time. The poster (130K JPEG) shows most of the 35 guest stars, including Bing Crosby, Tony Curtis, Zsa Zsa Gabor, Janet Leigh, Kim Novak and Frank Sinatra, who appear in cameo roles. See some of them also on lobby cards (115K JPEG).

The film was nominated for a number of Academy Awards including music, cinematography, editing and art direction. But none of this seems to have made Pepe successful with either critics or audiences. Leonard Maltin's Movie & Video Guide calls it an "incredibly long, pointless film.... this one's only if you're desperate."

However, as one IMDB reviewer says, "This movie has always been made fun of, but as misguided as it is, it is still entertaining, if only because it is so crammed full of guest appearances." Given all the star power in the film, it is surprising that as of 2012 it is not officially available on DVD. And Jeep fans certainly deserve to see a brief but classic scene with a bunch of Surrey Jeeps.

This short but funny sequence set at the Las Brisas resort in Acapulco, has Pepe trying to get directions to Janet Leigh's bungalow, to deliver flowers to her. He is told that it's at the top of the hill, and to just "follow that Jeep."

Of course there are a number of pink Surrey Jeeps at Las Brisas, and Pepe soon gets confused about which one he's supposed to be following on his scooter.

Before long, Cantinflas is lost among the huge Las Brisas fleet of Surreys, coming and going. But eventually he does find Janet Leigh's bungalow, where she is luxuriating in the bathtub (one of many in-jokes in the film, referring to her appearance the same year in the famous Psycho shower scene.) 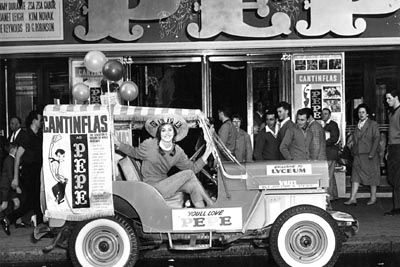 The Las Brisas scene was the inspiration for the advertisement of the film in Australia in 1961 by a CJ-3B Surrey. (See 1961 Beach Car on CJ3B.info.)

After Pepe meets most of the "Rat Pack" (apparently on a break from filming Ocean's 11) in Las Vegas, he wins a huge amount of cash, and there's an airport scene where the armored car from The Sands brings his winnings to the tarmac. On the left side of the frame is a grey CJ-3B with red wheels -- maybe a TWA vehicle?

The armed guards unload the bags of money, and bring them over to a conveyor belt to be loaded onto an airplane. Of course it turns out to be a CJ-3B "Hoveyor" (see Building Conveyor Belt CJ-3Bs on CJ3B.info.)

This is a good shot because it shows the United Airlines logo on the Jeep, and an employee operating the Hoveyor controls in the background. For a look at the front end of a Hoveyor in the movies, see Geisha Boy.

One more glimpse of a Jeep in Pepe is this Forward Control camera truck labeled "Ted Holt Productions".

There was also a photo published in Willys News showing this or another FC-170 actually being used as a camera truck during shooting of the film.

You can also see the Las Brisas Jeeps on the big screen in the 1967 "Matt Helm" movie The Ambushers. -- Derek Redmond

See more CJ-3Bs in the Movies.