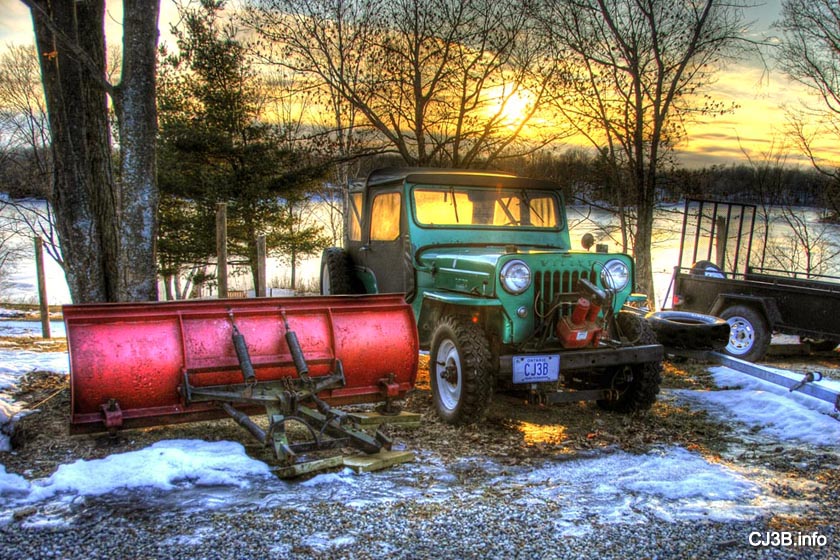 Back on 2 February 2009 in Canada and the U.S., the rodent prognosticators of Groundhog Day predicted six more weeks of winter. Apparently Punxsutawney Phil, the most famous woodchuck weatherman, makes that prediction most years, which seems pretty safe since Spring doesn't officially arrive until 21 March in the Northern Hemisphere.

However, during that February in Eastern Ontario we had melting and rain which wiped out most of the snow. See the above photo of my CJ-3B with Oconto Lake in the background. The good news is that the melting, followed by a few cold days, turned the lake briefly into a huge skating rink, and we didn't even need to take the Jeep down to clear the snow off the ice.

According to a 2017 scientific analysis of Phil's predictions over the past century, the only place where they had any significant correlation with the weather over the following six weeks was Oklahoma City, and in most places including Punxsutawney PA, he was below 50/50. But no doubt Donald Trump and many others will have more faith in Phil than in science.

Groundhog Day, halfway through winter, was originally called Candlemas, and for centuries in Europe, people looked to the behaviour of badgers or bears or other hibernating animals on that day, to predict Spring's arrival. But our furry forecasters may now be caught off guard as much as the rest of us, by the speed with which our climate seems to be changing.

2020 Update: Phil made one of his rare "early spring" predictions again this year, so here's hoping. Last winter was a cold, snowy one for us, but this winter has been relatively mild. One thing about climate change, there are going to be lots of surprises, as well as floods and wildfires, along the way.

Thanks to David Ridgen for the excellent photo, © 2009. It also appeared in the 2010 Jeep Classics Calendar. -- Derek Redmond

See more photos of my Jeep on CJ3B.info: