It's that time of year again, when the new "Jeep Classics" calendar shows up. This year it may be in your local shopping mall, so you can just point it out to your spouse and say "Hint, hint." Or you can order a copy online or by mail, and get it addressed to your significant other. If you do it soon, maybe you'll have forgotten all about it by the time gift-giving season rolls around. 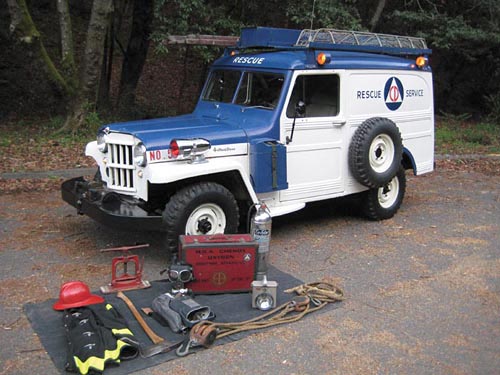 When you do get a chance to look closely at it, you may be surprised to see that this fourth edition of the calendar has fewer Universal Jeeps than in recent years -- just a couple of flatfenders and a CJ-5. But the other nine months are populated by a really interesting collection of other Jeep vehicles, including some unusual and even unique ones.

Check out January's 1959 Civil Defense Rescue Service truck for example. This is a rare item, but the original brochure included in the calendar shows that it was offered by Willys as a standard configuration. Paul Barry took this great photo, and like all the pictures in the large calendar it's beautifully printed on 12x24" semi-gloss stock. 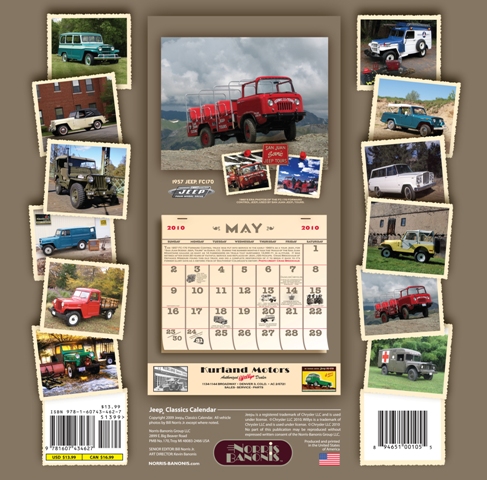 Every month has original literature or supplementary snapshots included alongside the big photo, plus dates in Jeep history highlighted, and a vintage ad for an authorized Jeep dealer. There's also a surprise bonus at the end, in the form of an illustrated article about Brooks Stevens, designer of many Jeep vehicles and other well-known consumer products.

The back cover (left) has a preview of the whole year, including a panel delivery truck, stakebed truck, military ambulance, Jeepster Commando with 3-way Whitco soft top, and an FC converted by San Juan Scenic Jeep Tours. And I have to disclose that this year, one of the flatfenders is my own hard-working CJ-3B snowplow Jeep. -- Derek Redmond

By the way, Norris-Banonis also have a new calendar this year called "Broken Down Heroes", with twelve months of Bob Christy's beautiful black & white photographs of old vehicles found abandoned in farmer's fields.

"Jeep Classics" and "Broken Down Heroes" are available online or by mail. Not available outside North America, due to the terms of licensing by Chrysler.

See the most recent year and previous editions of the calendar reviewed on CJ3B.info. -- Derek Redmond