Dave and Ruth relocated to Alaska in late 2009, and will likely be updating us on their Jeep travels up north, but in the meantime here's the story of their farewell trip through some of the beauty spots of the Southwest. -- Derek Redmond

See also Part 2 of this story. 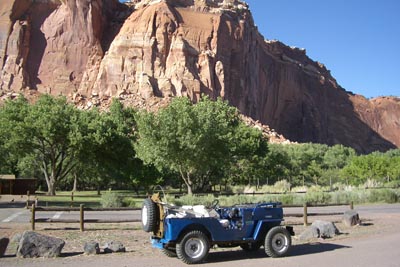 In 2006, Ruth and I had taken Lil Willy to Moab for Easter Jeep Safari. Due to employment shake-ups and a temporary one-year move to Virginia (during which time Lil Willy rested patiently on his jack stands back in Wyoming,) we missed our desired return trips in 2007 and 2008. Back home again in Wyoming by the fall of 2008, we prepared for a return to Moab and Canyonlands National Park for Easter 2009. 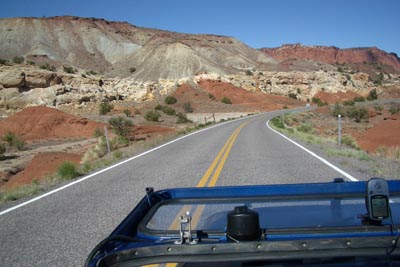 Throughout the winter we considered many potential runs, and after much discussion, decided to forego the crowds of the Moab area and the Islands and Needles districts of Canyonlands, choosing instead to take a long desired trip to Capital Reef National Park (right) for a few days, and then on to the Canyonlands Maze district. (See a map (350K PNG) courtesy of the National Parks Service, in a new window.)

The Maze is known as one of the most remote sections of country left in the lower 48 states. It is low in elevation and can be very hot during the summer, but during springtime, it can be cold and wet with both rain and snow, and can easily strand a Jeep, especially one traveling alone without a winch. Due to stormy weather during the spring of 2009, we postponed our trip until late June. 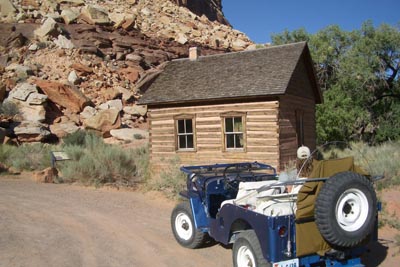 By the time we found ourselves set up in the Fruita Campground at Capital Reef National Park, we were well into the warmer temperatures of mid-summer. We took Lil Willy down off the trailer, removed his top and folded the windshield. Then we set out for an evening run to some of the nearby sites. We took a nice paved drive and visited the historic Fruita School (right), the Behunin Cabin, and the Gifford Farmhouse.

While camped, we met a wonderful and adventurous couple from British Columbia, Alan and Alicia. They were taking a several-month drive home from Cabo San Lucas where they had lived and worked through the winter. They had camped on the beaches of Baja Mexico, and were seeing the sights all the way home. 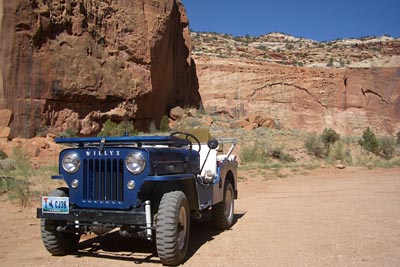 The next morning we took the "Scenic Drive" south from the campground, visiting Grand Wash and Capital Gorge. At the end of the Capital Gorge road, we took a hike through the sheer canyon walls (170K JPEG) of the old Capital Gorge Spur Road, that was closed in 1964 when Utah Hwy. 24 was opened.

On the hike we carried small umbrellas, not for fear of rain but for portable shade, and boy was I glad I listened to Ruth's wisdom instead of my inner man voice. It was terribly hot and there were a number of people struggling with the heat and sun. But we made good time and saw both the "Pioneer Register" (names carved on the rock walls) and the "Water Tanks" (deep pools of rain water in sandstone depressions, filled with tadpoles.) 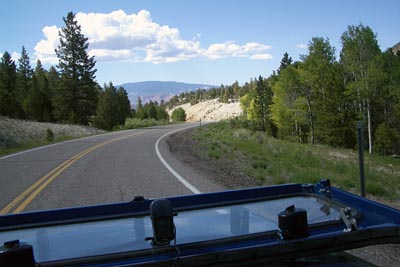 Upon returning to the Jeep, we headed back west and then south on the "South Draw" four-wheel-drive road. The road continued west and parallel to Pleasant Creek, gaining elevation until we entered the trees and finally intersected with Utah Hwy. 12. By this time it was much cooler due to the higher elevation, and we enjoyed a nice paved ride northbound on Hwy. 12 (right) back down to lower elevations and warmer evening temperatures in the beautiful shaded Fruita Campground.

We relaxed through the evening and discussed what to do next. Because of the heat, we decided against a trip the next day into Cathedral Valley, the northern section of the park. We also decided against what would certainly be a miserably hot run into the Maze section of Canyonlands, promising ourselves to return to both of these areas during a cooler future trip, and instead chose to head for higher country.

We have always desired a return to Mesa Verde National Park, and to drive Lil Willy around to the sights like we'd done in recent years at Glacier, Yellowstone, and Grand Teton National Parks, thereby continuing to add stickers to Lil Willy's side panel. So we decided to head east into Colorado and back home to Wyoming along the backbone of the Colorado Rockies. Along the way, we'd do as much of the National Parks and Monuments as we could. (See the map, 350K PNG).

With Lil Willy back on the trailer, we drove the next morning in air-conditioned comfort along the east side of the 100-mile-long "Water Pocket Fold" of Capital Reef National Park. The scenery is incredible; wild landscape views of desert pastel colors and feelings of isolation. After several hours of highly recommended and amazingly beautiful country, we reconnected with the pavement on Utah Hwy. 531, ending up at the Bullfrog community on Lake Powell in Glen Canyon National Recreation Area. 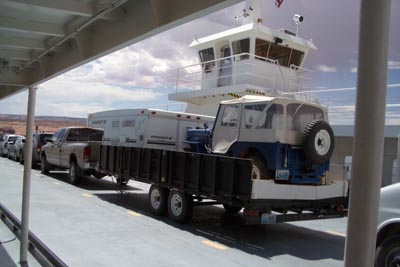 With cash funds short, and the local ATM out of service, we broke into the emergency $20 supply of cash and coin in the "survival kit," making total sums adequate to buy passage on the Lake Powell ferry (right) from Bullfrog to Halls Crossing. After disembarking, we continued eastward on Utah Hwy. 276 and pulled into Natural Bridges National Monument, a small and little-known jewel in the park system. We enjoyed a quiet, non-crowded evening camp (250K JPEG).

Because there were few other people in the campground, we were willing, for the first time, to try out our portable outdoor shower, complete with water controls on the side of our pop-up truck camper. We both agreed these were the best showers we had ever had! (No photos available.)

In the morning we broke camp and drove the one-way "Bridge View Drive," seeing the natural bridges from the overlooks, and then headed east to our next destination. If you have time, there are some nice hikes at Natural Bridges, and next time we visit we'll stay a couple of days.

Utah Hwy. 95, from Natural Bridges National Monument to near Blanding, drops so quickly and so steeply that my onboard fuel mileage computer read as high as 67.8 MPG. That's not bad for a Dodge diesel pulling a trailer! We regrouped in Blanding, bought fuel and groceries, filled the water tank, checked e-mail, then headed north to Monticello, and east past Cortez, CO.

Upon entry to Mesa Verde National Park we made camp at the Morefield Campground, raising the pop-up camper, and unloading the Jeep. Again we removed Lil Willy's top and laid down his windshield. We drove him over to the Ranger Station by the campground and purchased guided tour tickets for a next day visit to the Balcony House ruins. Then we drove Lil Willy up the long winding road to the Far View Visitor Center and bought special next day evening tickets for the Cliff Palace tour, a more theatrical tour performed by a man acting as the original archeologist in charge of restoring the ruins to their present state. 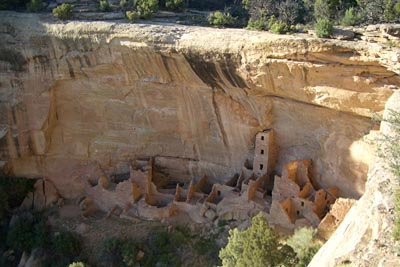 We took an evening "drive and stop" tour of the Mesa Top Loop and Cliff Palace Loop sites. At this hour most tourists were already back at their campsites having dinner and making campfires, and it felt like we had the park to ourselves. We quickly saw the benefits of "off hours" touring. Upon sundown, the sites on the top of the mesa close, and we started the long and cold drive back down to the campground. We could have put up the top, but it's just too much fun without it, so we raised the windshield, turned on the heater, and toughed it out. 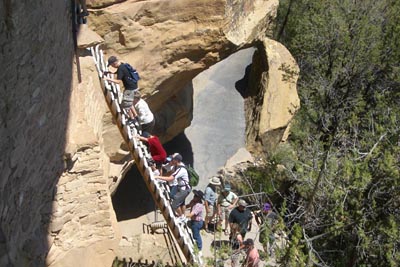 The next morning we drove the Jeep back up the mesa, went to our morning Balcony House tour, then took the long drive over to Step House, Badger House, Kodak House, etc. on the Wetherill Mesa Road. 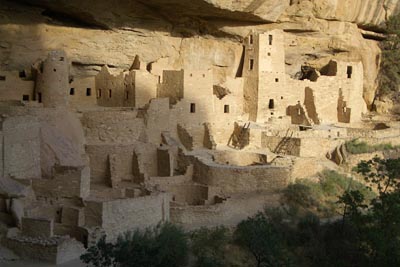 We returned to Far View Lodge for a nice dinner and then back to Cliff Palace (right) for our evening guided tour. (Cliff Palace is the largest cliff dwelling in North America, and dates from about 1200 A.D.) 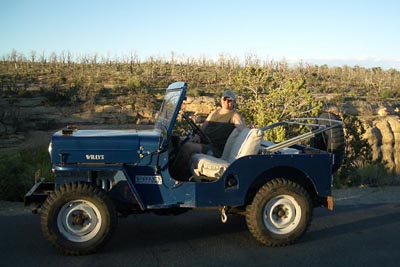 It was a big day, and again, after the tour, we drove back down the mesa in the dark for another night of sound sleep.

Thanks to Dave and Ruth for the wonderful story and photos. -- Derek Redmond

Also on CJ3B.info, see Larry Shank's stories about camping the Southwest with a CJ-3B in the 1950s, in Mom, Dad, a Jeep and a Teardrop.