CJ3B.info is pleased to present the story of Harry and Harriette Shank of Glendale, California and their many years of Jeep camping in the southwest United States. This 3-part series, including wonderful photos and even movies, is told by their son Larry, who has restored his late parents' customized Jeep CJ-3B and Kenskill Teardrop trailer. -- Derek Redmond 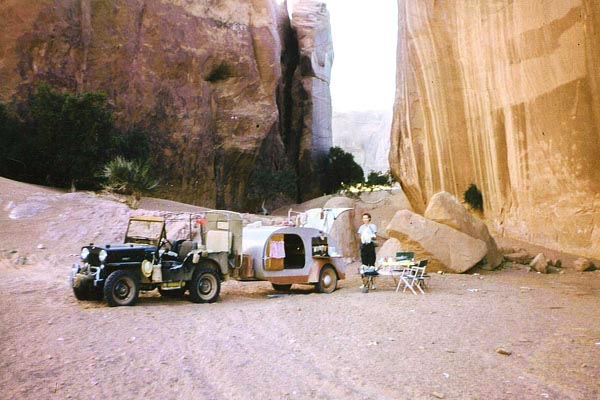 In 1949, after reading about the roadless Southwest in National Geographic magazine, my folks took their first trip to the area in a Buick convertible. After being endlessly stuck in the sandy dirt roads, they bought a used red 1946 CJ-2A Jeep in 1950.

Since they needed more room for supplies on the extensive backcountry trips, they bought the 1947 Kenskill Teardrop trailer in 1952. And the following year they traded up to the new Universal Jeep CJ-3B from Barney Motors in Burbank. (The CJ-3B is seen here as Mom sets up camp in Monument Valley in the summer of '53.) 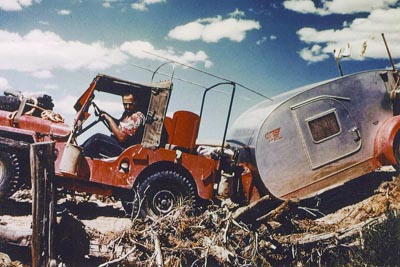 On the first trip with the Teardrop in 1952, the red Jeep had got stuck in a flash flood and quicksand on the Paria River in Utah. This became my favorite "Old Red Jeep Story" that Dad loved telling me as I grew up. The CJ-2A never fully recovered from that adventure (the drive train was equal parts fine sand, water and 90wt. oil.) 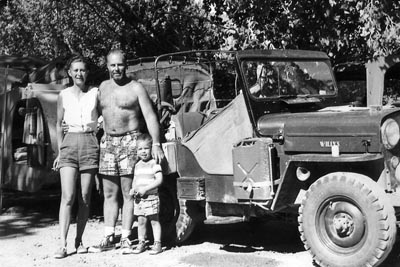 I was born in 1954, but had to stay at home with Grandma during my folks' trip in 1955. The following year, they bought a surplus army raft and a new 1956 Johnson outboard motor (we still have both) and they took me on my first camping/river trip at 18 months old.

The photo below shows everything ready in the driveway for that first trip in 1956, including the outboard on the back of the Jeep and the raft on top of the trailer. 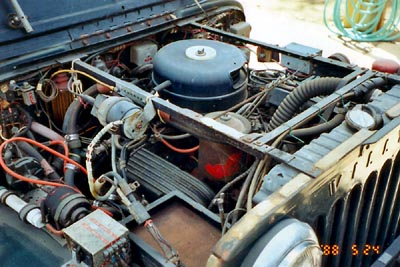 Dad added lots of accessories and weight to the rig, and he soon became tired of long slow runs in 2nd gear. He was a Lockheed engineer and he loved a mechanical/electrical challenge. Fortunately this was 1955 and Chevrolet had just introduced their small block 265ci V8. Dad bought a new engine in a crate, in late 1956. Dad and his friends in the Lockheed machine shop designed an engine/transmission adapter prototype out of wood, built the adapter out of steel, and installed it that year.

To complete the electrical part of the challenge, he maintained the Jeep's 6-volt system in parallel with the Chevrolet 12-volt system. Two 6-volt batteries and several interfacing relays, created a system that was a maze to everyone except Dad. 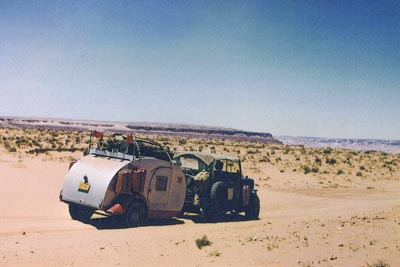 The new Jeep and the Teardrop received continual updates and "improvements" as Dad challenged them on yearly trips to the Southwestern desert. Notable changes to the Teardrop included steel runners on the undercarriage, independent 12-volt battery and electric lights, a Sears tent modified to attach to the galley area, and an extended trailer tongue (to mount the outboard motor.) 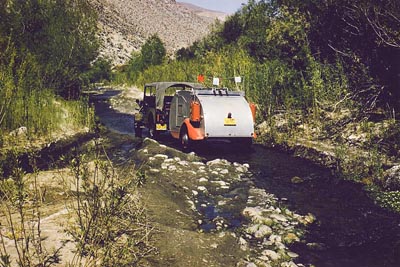 The trailer also received a new axle with larger wheels and tires, trailer brakes, reinforced tongue and axle (after repeated breaks and bends), and a roof rack to carry the rubber raft or the aluminum boat he bought in 1961 (we still have it too). 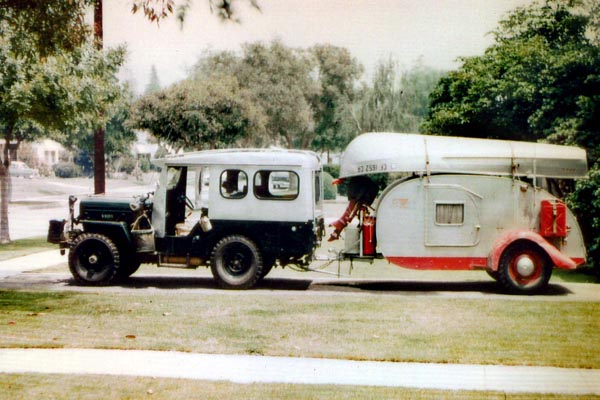 The Jeep received more than its share of changes. It already had the Koenig PTO winch when it was purchased. Along with the V8, additions over the years included: engine-driven air compressor, evaporative "air conditioner" (with straw-covered windshield vent and water drip feed), and bumper-mounted driving light that steered with the front wheels (see Harry Shank's Steering Headlight.)

There were also many additional gauges, passenger-side fuel tank, mods to the front grille to accommodate a larger radiator, 11" brakes, electric wipers and a Warn 30% overdrive.

Dad initially extended the bed by dropping the tailgate, but in the early 60's, he fabricated his own permanent extension. He bought a hard top from Sears and added an extra section to fit the longer body (unfortunately the top did not survive past the 90's). -- Larry Shank

Thanks to Larry for the story and photos. -- Derek Redmond