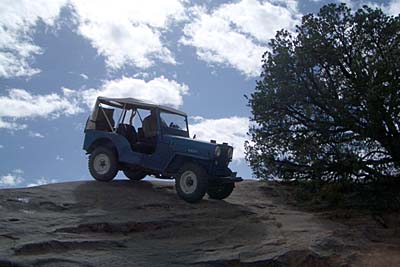 Hi, I'm Dave from Wyoming. Ruth and I made it to Moab this year for the Easter Safari with "Lil Willy" (our 1954 CJ-3B). I hope you enjoy the pictures. See a nice scenic shot, with the soft top down (100K JPEG). 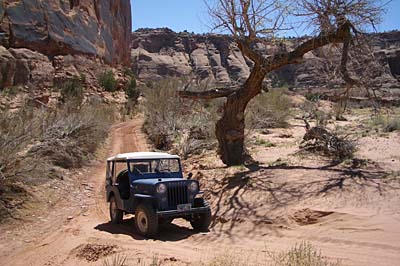 Lil Willy was bought new by a rancher in Douglas, Wyoming. We bought him from a local Ford dealer mechanic who had bought him from the rancher's daughter. He has been barned or garaged his whole life and is in excellent condition. You can still see the original green paint on the underside of the body. The engine was out and in pieces, and missing both block and crank. Two blocks later (and a go through, repair or replace almost all the mechanicals) I had him on the road, and we have had a ball so far. 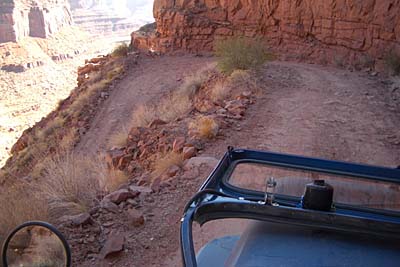 The first day we did Gemini Bridges, Bull Canyon, parts of Golden Spike and Mineral Point. The next day we did 25 miles of the east end of White Rim Trail including the Schafer switchbacks and Lockhart Trail down to the river. The third day was Long Canyon, Moab City, watching rednecks on the Dump Bump, and the south parts of Fins and Things. Fourth day was the north parts of Fins and Things, and finally on day five parts of Behind the Rocks.

We had one group on Behind the Rocks looking Lil Willy over pretty close and wanting to see under the hood (the F-head 4). 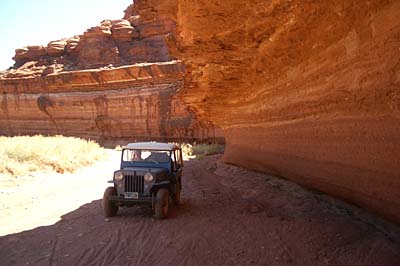 Comments we heard on the trail were:

"You're a pretty big guy for that size Jeep."

My cousin's son riding shotgun on the fifth day said, "Don't you ever sell this. This is the real thing." 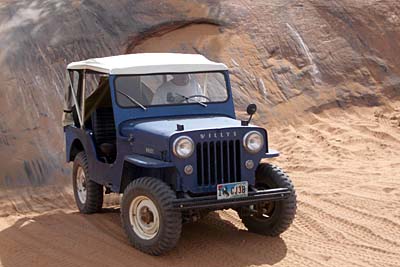 Our August 2006 cover photo shows Dave at the bottom of a rock that tests nerve and overhang. See also Dave heading down the rock (90K JPEG).

Thanks to Dave and Ruth for the story and photos. -- Derek Redmond