To provide a fuller context for the Jeep in the Congo, we also include some details of the other "jeep-style" vehicles seen in Congolese military service during the 1960s. The list below is not exhaustive but does cover most of the types in use.

Together the various Jeeps and MUTTs made up at least 90 per cent of the four-wheel drive utility vehicles in use by the ANC during the 1960s. Next in importance were probably the Minerva TTs -- Belgian made Land Rovers -- received from Belgium over a long period: examples have already been seen e.g. in Part 1 and Part 11. There were also inevitably some original Land Rovers but these all seem to have been obtained on the civilian market in the region. Both Katanga and South Kasai had previously also used Land Rovers in some numbers. 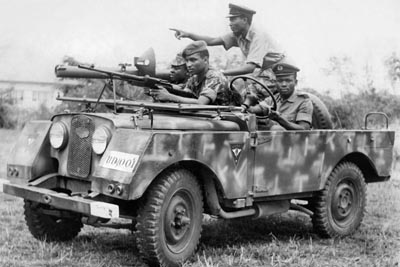 The basic Minerva TT was based on the original, slab-sided Land Rover Series I. The most noticeable difference was in the more angular front fenders of the Minerva even if there were various other minor modifications as well. The crew posing in this example are Congolese belonging to the air defence unit at Kamina air base in 1965, armed with a FN MAG machine gun and an RL-83 Blindicide rocket launcher. (Photo via Ferdinand Hollanders) 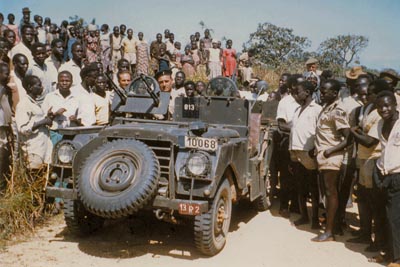 The Minerva TT also existed in a version intended for armed reconnaissance. This had a reinforced front end and additional stowage bins at the rear. The normal windshield was replaced by an armored shield and a twin machine gun mounting on a swivel. Several of these mountings were in due course transferred to M606 Jeeps used in the Congo: see Part 12 and Part 16. This particular Minerva was in use with Commandos du Kivu (CODOKI) but retained some of its Belgian markings. 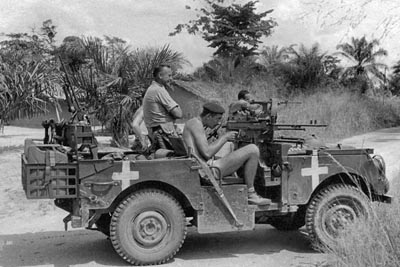 A similar Minerva from another angle, showing the additional machine gun fitted at the rear; this was often removed in Congolese service. This was one of the vehicles brought in by the Belgian paratroopers in November 1964 and left behind for the ANC when they returned home. (Photo © Jan Hekker) 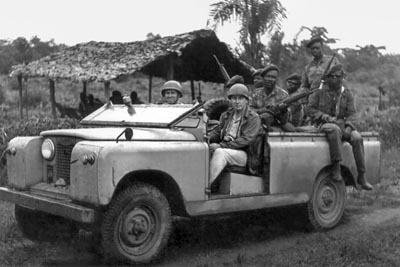 Various mercenary units obtained a few Land Rovers directly from civilian sources and these often even retained their civilian registrations. They were usually long wheelbase (109") Series IIAs. This one belonged to CODOKI which also used Jeeps, Minervas and International Scouts: see above and further down as well as Part 10. Unusually, there was no machine gun fitted, but the doors had been removed for easy access. (Photo via Francois Pletain) 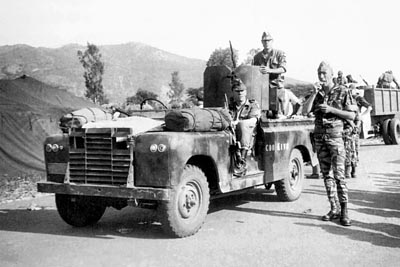 Another Land Rover 109 used in the Kivu province (see the Congo map) by a later group that took the similar name Commando Kivu. This example is partly armored and has an elaborate gun installation -- almost like a turret. Like the vehicle above, the Land Rover is right-hand drive and was likely purchased in former British East Africa, which drove on the left. (Photo via Pierre Chassin) 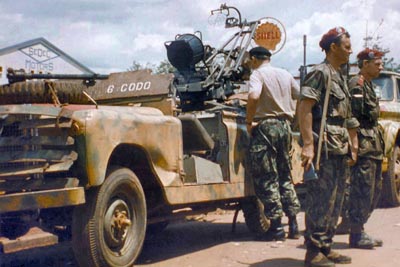 For pure firepower there was really nothing to touch this Land Rover in service with 1 Choc of 6 Commando in 1965. It had been fitted with a 20 mm Oerlikon cannon of the type already in service at independence (see Part 2) but it is unclear if the gun was ever fired in anger. The NCO inspecting the installation looks like he might have some reservations about its practicality. Note also the truck spring armoring at the front, similar to that used on some Jeeps of 1 Choc (see Part 12). (Photo via J-P Sonck) 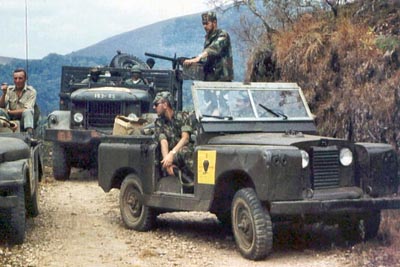 The ANC had very few short wheelbase Land Rovers so this example used by Commando Cobra was a real rarity. It is fitted with a .30 caliber Browning on a pylon and has armor slats in front of the grill, similar to those on some Congolese Jeeps (see Part 11). On the left is a CJ-6 of the same unit and behind them an M35 "deuce and a half". (Photo © F. Guerrieri)

In addition to the Jeeps and Land Rovers there were also various other brands and types of similar style vehicles, some of which are shown below to round out this account. 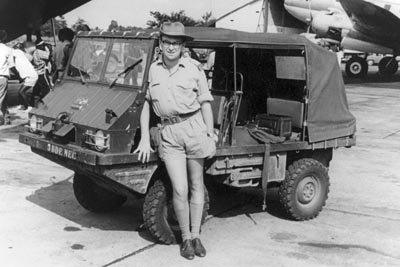 The Steyr-Puch Haflinger (named after a breed of horse) was an unusual 4x4 vehicle from Austria that weighed only around 600 kg (1,320 lbs) and had good off-road mobility. Small numbers had been used by Katanga and another batch was bought for ANC use in 1964. Most were used within the 5th Mechanized Brigade. (Photo © Jacques Flamand) 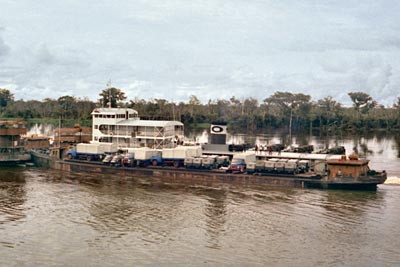 The Jeep-like vehicles on the barges lashed to this riverboat -- at least those on the nearest one -- are not CJ-3Bs or CJ-5s but Fiat Campagnolas. This kind of vehicle was mainly used by the Congolese police, but a few examples also found their way into military service. Virtually all new vehicles going to the inland in the northern half of the country would be delivered by river barge, and once arrived at the destination would seldom leave again. (Photo © Rolf Hultman) 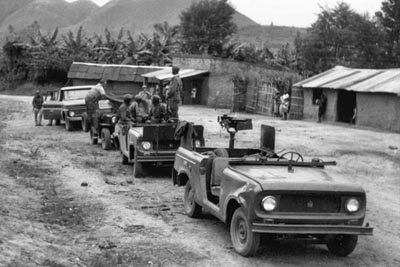 The early and mid 1960s saw the development in the USA of various civilian four-wheel drive cars that would in time develop into the SUV class of vehicles. One of the first was the International Harvester Scout 80 and a few of these were obtained locally for the CODOKI unit in Kivu in late 1964. They had their doors removed and machine guns fitted, and were used as patrol vehicles. The type was also used by the CIA (see Part 15). (Photo © André Dessy) 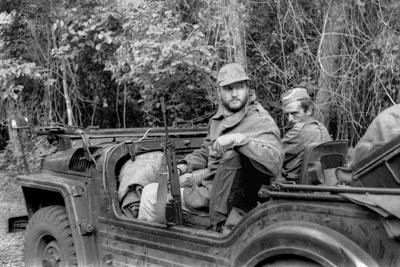 By contrast, the Austin Champ was designed in the late 1940s as a military vehicle for the British army, but proved a poor competitor to the Land Rover. This right-hand drive Champ used by Spanish mercenaries in the Congo was likely a surplus sale from the British army in East Africa. (Photo © Vicente Talon.)

An image showing a Champ in British service can be found at Australian Army CJ-3B Trials. The example(s) in the Congo probably retained the original British Bronze Green finish. 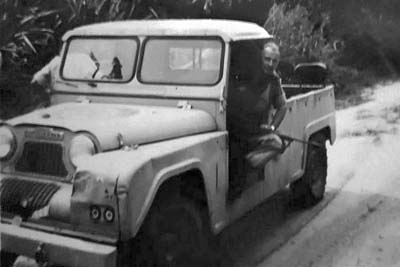 The Champ's successor, the Austin Gipsy, was another Land Rover competitor that never made it big. Once again, the type found its way into ANC service in small numbers. This 1965 model used by 5 Commando that same year is also right-hand drive and was likely obtained through one of the former British colonies. (Photo via J.A Britz/www.mercenary-wars.net)

Some examples of earlier models of the Gipsy had apparently been used by the ANC a few years previously, as seen in a 1962 photo (100K JPEG). 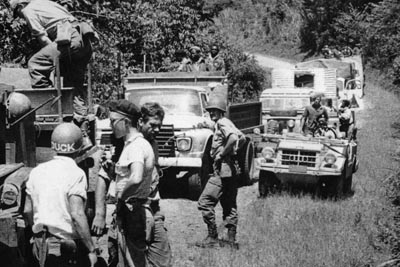 The German DKW Munga seen to the right in the photo was another unusual vehicle that found its way to the ANC mercenaries. The civilian Congolese licence plate on this white-painted Munga shows that it, too, was a local procurement, but it was definitely in military use. There is no sign of a gun installation, however. DKW was one of the companies in the Auto Union group, which subsequently became Audi -- hence the logo on the grille. 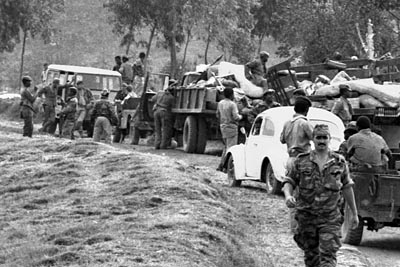 This rather confused image from Bukavu in 1967 (see Part 16) is a fitting final illustration from the Congo. It shows the jumble of vehicles included in a typical army column from the closing period of the mercenaries, when "make do" was the watchword. Visible are a couple of Jeeps, two non-descript trucks, a VW Beetle and -- at the far end -- a Volvo L3314 HT "Laplander" that had somehow found its way to the beleaguered town together with at least one other example. (Photo © Marion Kaplan)

A Volvo of the same type and in the same gray and red standard colors can be seen in an unrelated photo (100K JPEG). 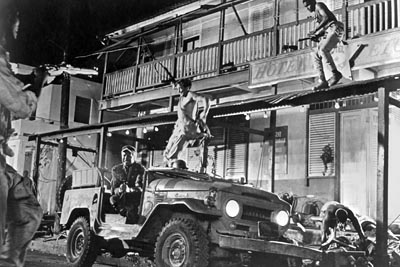 Contrary to this rousing scene from the film The Mercenaries (a.k.a. Dark of the Sun), filmed in Jamaica and released in 1968, there is no indication that even a single Toyota Land Cruiser was used in military service by anyone in the Congo up to that time. It was in fact conspicuous by its absence, considering that examples of virtually every other contemporary Jeep-style vehicle was present. In later years, though, the Land Cruiser was to become a common sight in the Congo.

Continue to the Appendix: Civilian Jeeps in the Congo or return to the Table of Contents.