Peacekeeping CJ-3B in the Movies 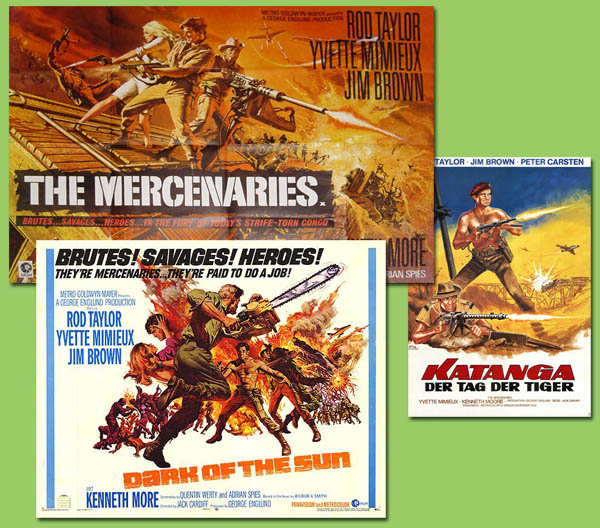 Made by MGM in Brtiain, and directed by Jack Cardiff, this film was originally titled The Mercenaries. It is known by other titles in other countries, including Katanga or Last Train From Katanga, and in the U.S. as Dark of the Sun (also the title of the novel by Wilbur Smith on which it is based.)

The are a lot of different posters for the film, and they all reflect the fact that there's plenty of violence in it, although certainly nothing that exaggerates the horrors of the 1964-65 Simba rebellion in the Congo, where the film is set.

David Cairns has written, "The strength of Dark of the Sun, superficially an action/adventure yarn set in the Congo during revolution, is its simplicity: Rod Taylor and best bud Jim Brown simply have to drive a train into the jungle and come back with a crowd of refugees and a fortune in diamonds, while fighting off the enemy army, a UN plane who mistakes them for bandits, and a treacherous ex-Nazi officer (Peter Carsten, suitably vile). But concealed amid the mayhem is a humanist message, and somehow the film manages to deliver this without seeming altogether hypocritical... it seems like an unusually delicate balance for a film which appears to think with its fists." (The Forgotten: Jack Cardiff's "Dark of the Sun")

The only significant appearance by a CJ-3B is in shot #11 of the first scene of the film, and unfortunately we only get to see part of this accurately detailed United Nations peacekeeping Jeep, carrying a Browning machine gun.

As a DC-3 arrives in the Congo with our heroes on board, we get one other distant glimpse of the Jeep from the rear.

(For very similar real scenes from the Congo, see Military Jeeps in the Congo on CJ3B.info.)

The only other Jeep appears briefly in the background as we first meet Captain Henlein, the ex-Nazi (played by Peter Carsten.)

Much of the the film was shot on location in Jamaica because of the country's steam railway system, and the scenes on the armed train are a treat for railway fans and action fans.

The third star of Dark of the Sun is Yvette Mimieux as Claire, a French woman who is rescued after her family has been killed.

What could have been a great role for a CJ-3B, after the train reaches the town where the refugees and diamonds are waiting, is unfortunately played instead by a mid-sixties Toyota Land Cruiser. This is not a vehicle known to be used in the Congo during the 1960's (see Military Jeeps in the Congo on CJ3B.info.)

But as Cool Ass Cinema says, "The brilliant script perfectly melds fact and fiction, action and exposition, and also some great one liners and dialog exchanges. Truly a spectacular piece of action entertainment exploding with testosterone, barrels of sweat and smoking gun barrels."

Thanks to Federico Cavedo for finding this. -- Derek Redmond