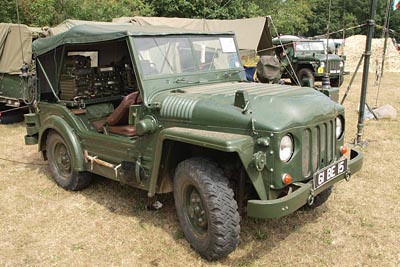 In 1958 the Australian Army tested five small 4-wheel-drive vehicles with an eye toward replacing the UK-built Austin Champ, which had been in use by the Army since 1950, alongside surplus WWII jeeps still in service. The Champ seen in this photo by Alf Van Beem is a 1954 model in Britain.

One of the vehicles tested was a standard commercial Willys CJ-3B. The results of that test appear in a document titled Army Design Establishment, Report No. TI 1762C: Truck, 1/4 ton, 4x4 (Willys CJ-3B). 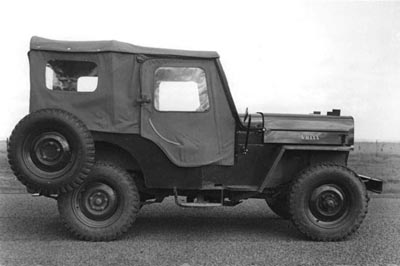 The Army tested a CJ-3B provided free of charge by Willys Australia. It arrived at the test location north of Melbourne in May 1958, with only 54 miles on the odometer. There would have been pressure to consider the CJ-3B since it was assembled in Australia with over 50% local content, and the notched hood blocks and right-hand drive seen in the illustrations confirm the test vehicle was Australian. 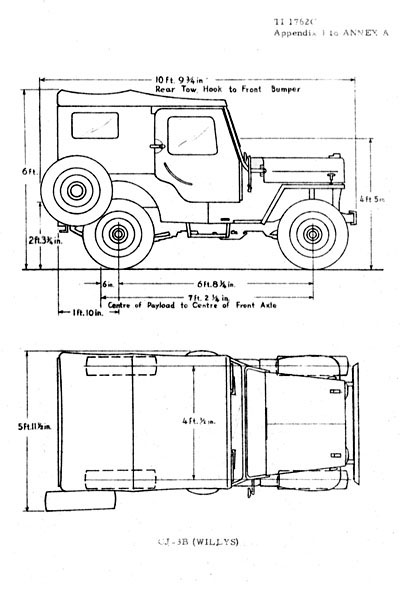 Statistics recorded during testing included a stopping distance of 13.9 ft. from 30 MPH on a paved road using the foot brake, and 28.5 ft. using the hand brake. Acceleration from 0-30 MPH took 7.37 seconds, and maximum speed was 59.18 MPH. Fording of shallow water to a depth of 20 inches was judged satisfactory.

Fuel mileage was 21.9 miles per Imperial gallon (equivalent to 18.5 MPG US) which gave the Jeep a range of 191 miles on a tank of gas. This range was judged to be unsatisfactory, as Army specifications called for a range of 300 miles.

The 12-volt electrical system did not meet the Army's 24-volt spec.

Page 1 of the report (180K JPEG) describes the basic trial conditions, which involved loading the Jeep with a crew of two and a 560 lb. load in the cargo compartment, and driving it for approximately 4000 miles. Most of the mileage was on the "Mount Charlie" test circuit (120K JPEG) which was a combination of gravel roads (including "Cherokee Rd.") and cross-country. Speeds were "such as to accelerate the failure of weak components, in order to obtain a measure of the durability of the vehicle in a relatively short test." 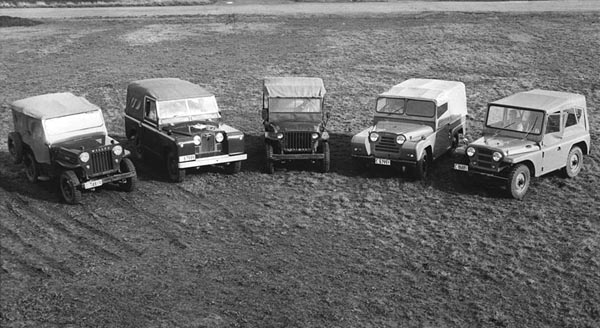 The vehicles in Phase 1 (approximately the first 400 miles of testing) included (from left) the CJ-3B, Land Rover Series II, Ford GPW currently in use by the Army, Austin Gypsy, and the Australian-designed Freighter Pilot Model No.3.

The last two were ruled out during Phase 1 due to suspension failures and the need for further development of the new designs. 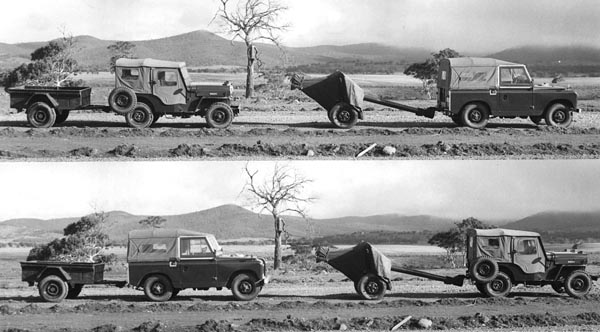 The Jeep and the Land Rover were on the short list at the end of Phase 1. Noted advantages for the Land Rover included a roomier, more comfortable cabin, and a greater percentage of Australian content. Both vehicles were rated as satisfactory in towing trailers and field guns.

An M38A1 Jeep arrived from the U.S. and was also in contention in Phase 2, the longest portion of the testing. 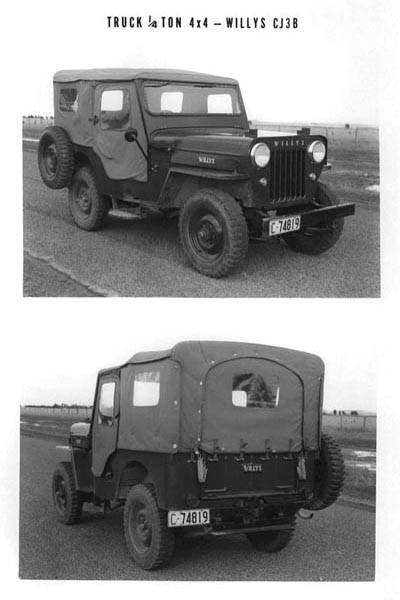 Page 4 (160K JPEG) of the final report on the CJ-3B mentions that "various defects in the trial model were discussed with the manufacturer, and it was ascertained that the following modifications have been incorporated in current production of commercial trucks:

(a) Driver's seat re-located 2 inches to the rear.
(b) Windscreen wiper turned 180 degrees to give better visibility.
(c) Clutch actuating shaft replaced by a cranked type to prevent fouling of the front propeller shaft.
(d) Spare tyre carrier transferred from the offside to the near side.
(e) Removal of access steps (optional equipment)."

The move of the spare tire was apparently related to the conversion of the Australian Jeeps to right-hand-drive, and to the question of visibility mentioned below. The terms "offside" and "near side" are leftovers from the cavalry era, and refer to the right and left sides of a horse (from the rider's perspective).

Page 4 also includes comments from a Lieutenant Colonel, to the effect that the CJ-3B's performance and handling were acceptable, but that it had been replaced in the U.S. by the CJ-5. He added that the F-head engine makes maintenance more complicated, the visibility from the driver's seat is extremely bad, the driving position is most uncomfortable, the layout of controls is bad for right-hand-drive, and the bodywork is not strong enough. 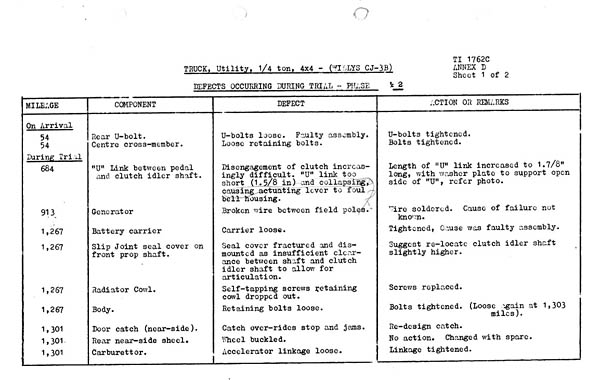 Appendix D lists "Defects Occurring During Trial." It records all the specific component failures that occurred during this torture test, including speedometer cable, brake linings, radiator leak, and accelerator linkage.

The Summary page (90K JPEG) of the report, dated 12 June 1959, is labelled "Restricted" and apparently was kept classified for some time. It doesn't paint a very flattering portrait of the CJ-3B. However, you can't really blame the Australians for not wanting to make the 3B their future light reconnaissance vehicle. Although the CJ-5 was not yet available in Australia in 1958, it didn't take the Army long to figure out that the CJ-3B was not the latest in Jeep technology.

The Summary, signed by a Brigadier, makes it clear that "the Willys CJ-3B is NOT an acceptable vehicle for the Australian Army," and that the most significant deficiencies are "lack of adequate body strength and visibility, both necessary in the theatres where Australian troops are likely to operate." 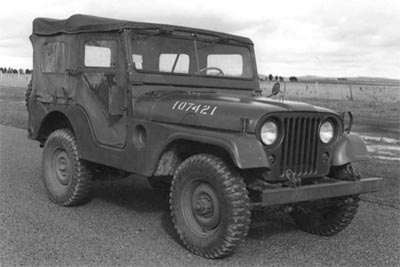 The fully military M38A1 was added for Phase 2, after it had been shipped to Brisbane and driven up to Melbourne. Although it had not been converted to RHD it was considered to be similar to the soon-to-arrive-in-Australia CJ-5.

The A1 did not fare much better than the 3B in the test, with the most serious complaints being broken springs and frame cracks. It was also found to have excessive body roll and a cramped cab. But it was not rejected as unacceptable, because at least it was not a Jeep model expected to be phased out.

The Ministry of Supply (and apparently the British Army), were also testing the M38A1 in 1958, against four other vehicles (20K GIF). The group even included the GAZ 67B from Russia (presumably not a contract contender, since the USSR would have been considered a likely enemy at the time.) See a "SECRET/DISCREET" dispatch to Headquarters (20K GIF) from the Australian Army staff in London on 15 April 1958. A School of Infantry report on the M38A1 (20K GIF) in late 1958 found "excessive sway of the driver", "pronounced bounce over moderately rough ground" and a gearshift knob that "tends to come free of the lever."

A summary of the tests on all the vehicles, including the complete reports as PDF files, is available at the Registry of Ex Military Land Rovers.

Thanks to Jeff Spencer and Raymond Kennedy, and Richard Green at the Registry of Ex Military Land Rovers. Thanks to Alf Van Beem for the photo of Paul Jackson's 1954 Austin Champ. -- Derek Redmond

Return to CJ-3Bs in History or to M606 Military Jeeps.